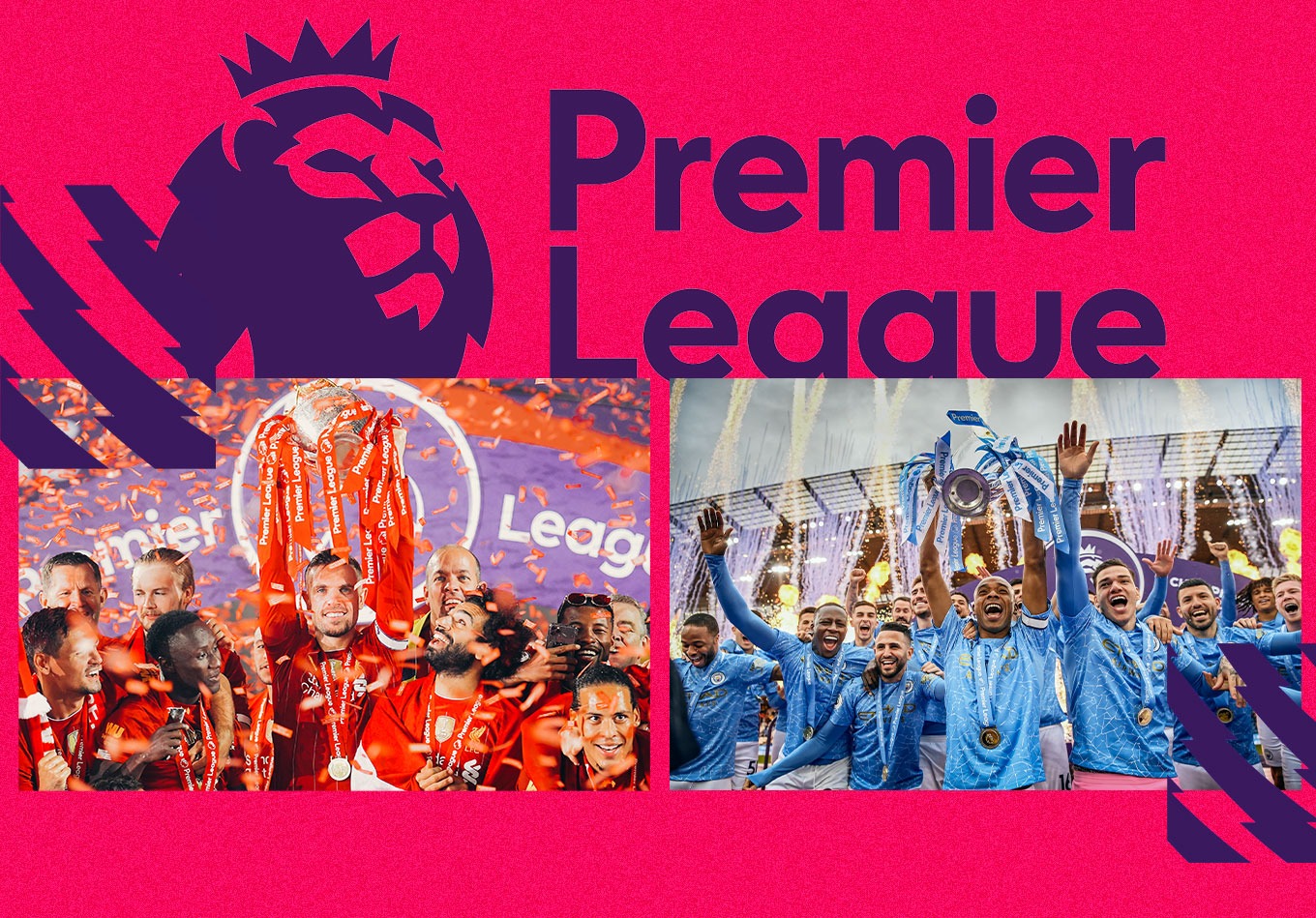 Most Points in a Premier League Season: The Leaders

Only one team in English top-flight history has managed to reach 100 points, but how close have other teams come? We look back at the most points won in a Premier League season by clubs.

Only one team have ever won 100 points in a single English top-flight season: Manchester City in 2017-18. They only hit the century thanks to an injury-time goal from striker Gabriel Jesus away at Southampton on the final day of the season, with that 1-0 victory taking them to the landmark.

32 wins set a new English top-flight record for the highest tally of victories in a single season, but they replicated this feat only a season later when winning the title again in 2018-19, albeit with two points fewer (98). 16 of these wins came away from home – another Premier League record – while equalling Tottenham Hotspur’s English top-flight record set in 1960-61. However, based on three points for a win, City edged Spurs out on points with 50 in 2017-18 (W16 D2 L1) compared to Spurs’ tally of 49 (W16 D1 L4).

18 of their 32 wins same in a consecutive run between August 26 and December 27, setting another Premier League record (which has since been equalled by Liverpool).

This season also saw them score 106 goals in the Premier League – the most by a side in a single campaign since the competition began in 1992. The previous top-flight team to score more in an English league season were Spurs in 1962-63 (111), but they were still some distance off Aston Villa’s phenomenal 128 goals across 42 games in 1930-31 – a campaign that only saw them finish second behind Arsenal, who scored 127 times themselves.

As mentioned, City secured 16 away wins in this season, while their overall goal difference of +79 is still the best seen in the competition across a single season.

All these records helped them smash yet another one, by winning the Premier League title by a huge 19 points over second-placed Manchester United – an all-time top-flight league record in England.

With Pep Guardiola’s first Premier League title as a manager, he added to his already packed honours list. This was a seventh top-flight league title after winning La Liga on three occasions with Barcelona as a coach and another three Bundesliga titles with Bayern Munich in Germany.

Liverpool picked up their first-ever Premier League title and their first in the top-flight since 1989-90 with this outstanding campaign. The 2019-20 season was the strangest of all, with a pandemic forcing the season to an abrupt halt in March before returning in June without fans in stadiums – this didn’t stop the Reds from lifting the trophy, though.

When the season stopped on March 9, Liverpool were 25 points clear of Manchester City at the top of the table on 82 points from 29 games. At a ratio of 2.83 points per game, Jürgen Klopp’s team were on course to break the 100-point barrier, but the enforced break affected this and Liverpool “only” managed 17 points in their remaining nine matches (1.89 per game).

2019-20 saw Liverpool equal the all-time English top-flight winning run of 18 games (set by Manchester City in 2017-18), with this run coming between October and February. This helped them seal the title after playing just 31 matches, following Man City’s defeat to Chelsea on June 25 – the earliest English title win in top-flight history.

This was Klopp’s hat-trick of top-flight league titles, after previously winning the German Bundesliga with Borussia Dortmund in both 2010-11 and 2011-12.

2018-19 saw Manchester City retain the Premier League title – something that they’d failed to do following their previous two title victories in 2011-12 and 2013-14. However, despite achieving an outstanding 98 points, they still fell two points short of their Premier League record from 2017-18.

After suffering a shock 2-1 away defeat to Newcastle United on January 29, City regained their focus to blow their fellow title contenders away – including Liverpool, who finished only one point below them. Pep Guardiola’s side won their last 14 league matches, while also picking up the League Cup and FA Cup in this period. As they also won the Community Shield at the start of the campaign, City became the first side to ever hold all four of England’s primary football trophies.

City went into the final day of the season needing to defeat Brighton & Hove Albion away to make sure of a back-to-back Premier League title, and they did so in style. They suffered an early scare, with Brighton’s Glenn Murray opening the scoring on 27 minutes, but the lead only lasted 83 seconds before Sergio Agüero equalised and then further goals from Aymeric Laporte, Riyad Mahrez and İlkay Gündoğan sealed the title.

This was the first time that a side had retained the Premier League title since Manchester United did so in 2008-09, and it’s not happened again since.

With 32 wins, they replicated their own English top-flight record from only a season before – but 2018-19 saw them lose two more games (4) than they did in 2017-18 (2). City also set seasonal records for most minutes leading (2088) and fewest minutes trailing (132) in a single Premier League season.

Liverpool pushed Manchester City all the way in 2018-19, but their fantastic tally of 97 fell just short of helping them secure their first Premier League title. In fact, Liverpool’s 97-point total was the most by any team not to win an English top-flight title – no team has ever won 90+ points or won 30+ games and not lifted the English top-flight trophy before or since 2018-19.

The Reds had the best defensive record in 2018-19, but their mean backline wasn’t enough to win them the title. They kept the most clean sheets (21) while only conceding 22 goals – only Arsenal in 1998-99 (17) have conceded fewer goals and failed to win the Premier League title in a season.

2004-05 saw the introduction of José Mourinho to the Premier League, as he took charge of Chelsea following back-to-back league titles in Portugal with FC Porto. Even more impressive was his UEFA Champions League title with the Portuguese giants only a week before his move to London.

Mourinho’s first season at Chelsea saw an awesome defensive display, with both 25 clean sheets and only 15 goals conceded setting Premier League records by a team in a single season. The only other team to concede as few as 15 goals in an English top-flight season were Preston North End in 1888-89 (also unbeaten in that campaign), but they only played 22 matches that season.

Chelsea’s title win was their first in 50 years, while their 95-point tally was the most in an English top-flight season until Man City’s astonishing 2017-18 campaign.

2004-05 saw the Stamford Bridge outfit bring in players that would go on to become longer term heroes, such as Didier Drogba, Paulo Ferreira, Ricardo Carvalho, Arjen Robben and Petr Čech. The Czech Republic goalkeeper would concede only 13 goals in his 35 league appearances in this title-winning campaign, while his personal tally of 24 clean sheets is still the most by a goalkeeper in a single Premier League season.

Chelsea’s average starting XI age in this season was just 25 years and 250 days old – it remains the youngest to win a Premier League title.

2004-05 can also be remembered for possibly the best relegation battle at the bottom of the Premier League – no side was relegated until the final day, with Southampton, Norwich City and Crystal Palace eventually losing out to West Bromwich Albion for the drop to the Championship.

The closest that Chelsea have got to their club record tally of 95 points in 2004-05 was in Antonio Conte’s first campaign as manager in 2016-17. They won the title with 93 points, which was seven ahead of his current club Tottenham Hotspur.

Spurs could count themselves unlucky in this season, with the north London club having both the best record for goals scored (86) and goals conceded (26), while losing fewer matches (four) than Chelsea (five).

Leicester City came into 2016-17 as the reigning Champions following their shock success a season before, but the Foxes finished 12th and set the record for the worst title defence in the Premier League era.

From November 20 to the end of the season, Chelsea spent all but one of the 183 days of the season in first place – only being knocked off top for one day by Arsenal. Before that point, Chelsea had only ended two of the previous 99 days top of the league, timing their form to perfection.

After their title win in the inaugural Premier League season, Manchester United sealed a second in succession in 1993-94 – picking up eight more points than the previous campaign in the process. Of the three Premier League seasons to contain 42 games, this was the highest points tally (84).

The 1993-94 season was 268 days long in total, and Manchester United were top of the league at the end of 262 of those – only Aston Villa (3), Everton (1), Liverpool (1) and Ipswich Town (1) led the table for a night other than United, with all six of those nights coming in the first nine days of the campaign.

Sir Alex Ferguson’s side had their fantastic start to the season to thank for their success. They dropped only four points in their first 15 matches (W13 D1 L1), but from November 24 onwards they were to win 52 points from 27 games – less than Blackburn (55) and level with Newcastle (52). Only a season later, United lost the title to Blackburn.

1999-00 saw Manchester United come off the back of a historic treble campaign to secure their highest points-per-game tally in a single Premier League campaign (2.39). Their title success going into the new century wasn’t built on a solid defence though, with United conceding 45 goals in total – the most of any Premier League champion.

United were excellent at Old Trafford in 1999-00, winning 15 and drawing four of their 19 games at home and finished their title-winning season with 11 wins on the bounce.

The 18-point gap between United and Arsenal in second is the second-biggest seen in an English top-flight season, with only Man City’s 19-point gap over United themselves in 2017-18 higher.

Another team to hit 91 points in a season were Chelsea in 2005-06, who followed up their title win in José Mourinho’s debut season as boss with a second in succession.

Chelsea first spent a night on top of the 2005-06 Premier League table on August 24 – 12 days into the season. They didn’t spend a night off it from this point on.

2003-04 was the record-breaking season of the Arsenal Invincibles, as the Premier League winners ended the season without losing a single game. This is still the only case of a side doing this in an English top-flight season with at least 38 games, with only Preston North End in 1888-89 replicating an unbeaten campaign from a 22-game season.

The Gunners won the league by 11 points ahead of Manchester United, but Arsene Wenger’s side did draw 12 of their 38 matches – only one Premier League champion has ever drawn more: Man Utd in 1998-99 (13).

Manchester United also posted a 90-point tally in 2008-09 on the way to their 18th English top-flight title. This was the season where the Red Devils finally caught up with Liverpool’s tally of league wins in the top division.

During their title-winning season, United kept 24 clean sheets with 14 of these coming in successive appearances for goalkeeper Edwin Van der Sar. His spell of 21 hours and 50 minutes without conceding a single goal is an all-time Premier League record.