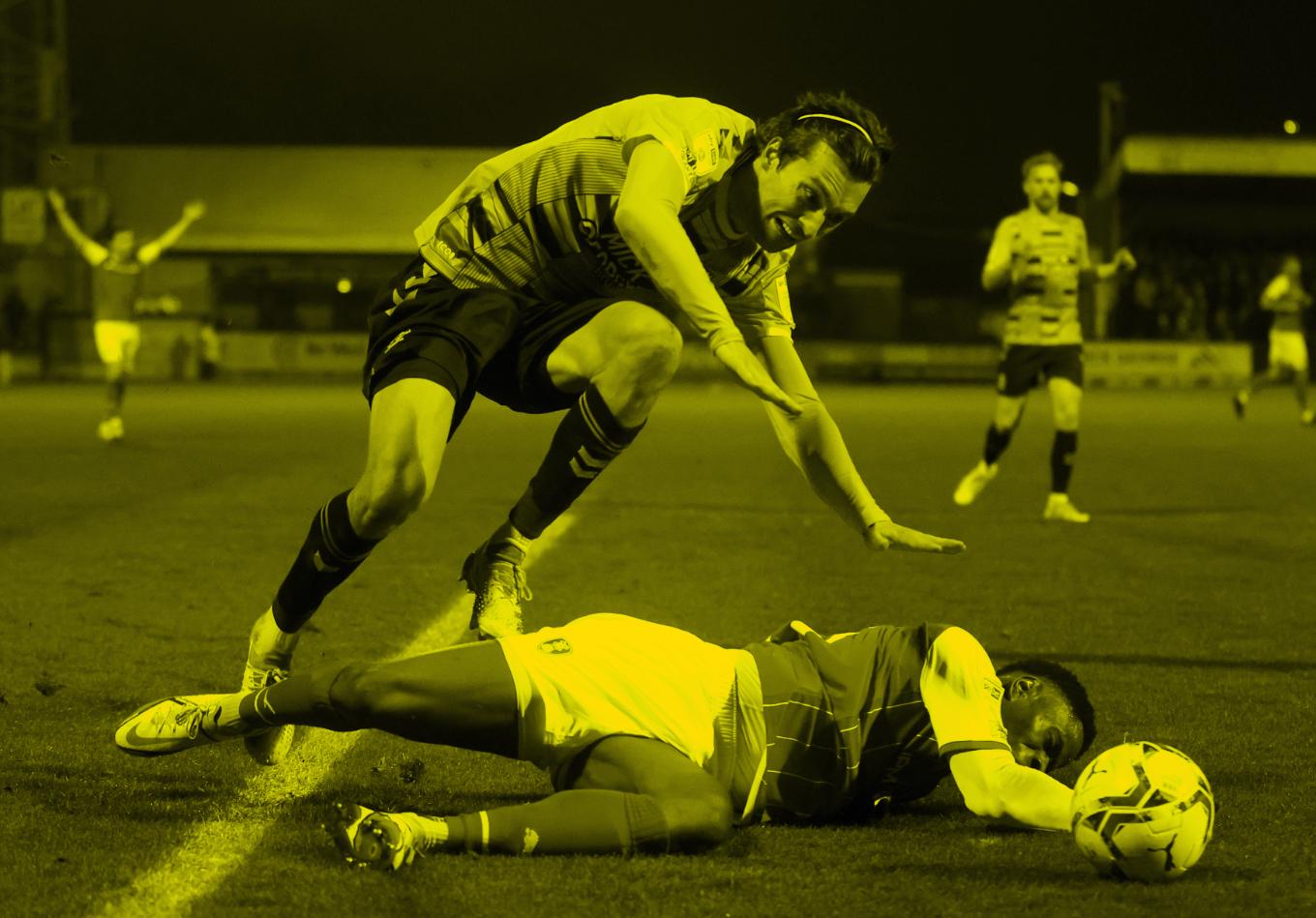 How is League One Shaping Up at the Halfway Point?

Even with the fixture list cut in half by Covid-induced cancellations, the last round of League One fixtures before Christmas painted the perfect picture of the contrasts which define England’s third tier.

At the Globe Arena, 4,018 fans saw Morecambe take on Lancashire rivals Fleetwood Town – while 216 miles away at Portman Road, 29,005 were in attendance for a battle of former champions of England between Ipswich and Sunderland.

Footballing worlds collide at this level, a sometimes overlooked panel in the rich tapestry of the English game. And the halfway point of the current campaign (well, four teams have played enough games to make it that far) seems as good a time as any to show League One a little analytical love.

Ipswich and Sunderland’s 1-1 draw on Saturday was only their sixth third-tier meeting. The pair have faced each other 54 times in the league over the years; 20 of those games have taken place in the top flight and 28 in the second tier.

The priority for both clubs is simple: ‘Get out of this….place’ and back to the Championship – the division Sunderland finished bottom of in 2017-18 and Ipswich rock-bottom the following season. Sunderland almost bounced straight back up, succumbing to a 94th minute winner in the play-off final against Charlton; Ipswich haven’t even made it that far, finishing 11th on points per game (PPG) in the truncated 2019-20 campaign and ninth last term.

Charlton themselves have spent five of the last 10 seasons in League One, having come straight back down in 2019-20 – the halcyon UEFA Cup qualification-targeting days of Alan Curbishley’s reign just a distant memory. Five years ago, Sheffield Wednesday came within 90 minutes of a top-flight return; now they’re in the third tier for the third time since relegation from the Premier League at the turn of the century.

Bolton and Portsmouth – who, along with Sunderland, Wednesday, Ipswich, Charlton and Plymouth boast an average attendance of 10,000 – have both tumbled all the way down to League Two since their respective top-flight relegations in 2012 and 2010. Then there’s Wigan, the least gigantic of League One’s giants but a Premier League team as recently as 2013 — a season in which they also beat Manchester City to win the FA Cup.

Mismanagement to one degree or another has afflicted all of these clubs – but how they came to find themselves in League One does little to taint the inherent diversity which makes this division so brilliantly bonkers.

Ipswich’s 2-2 draw at home to newly-promoted Morecambe – playing at this level for the first time in their history – on the opening day of 2021-22 was League One in microcosm. Thirty years previously, Ipswich had lifted the UEFA Cup; Morecambe had just finished second-bottom of the Northern Premier League.

History counts for nothing on the pitch, and Ipswich would soon lose to Morecambe’s fellow new boys Cheltenham – and later Accrington Stanley, who will never shake off a 22-year association with that white stuff that comes out of a cow. Morecambe themselves ended August by recording a famous 1-0 win over Sheffield Wednesday, while Cambridge United – back in the third tier after 19 years away – went and beat Portsmouth 2-1 at the usually impenetrable Fratton Park in September.

Clearly, League One’s smaller fish can have their day as sharks – but they can also ascend the food chain to become predators on a more permanent basis. Wycombe Wanderers are a prime example of that. The Chairboys – relegated from the Championship last season, their first-ever second-tier campaign – currently sit fourth. It was only in 2014 that they almost dropped out of the EFL entirely.In 2019-20, Wycombe topped the tree at Christmas and eventually finished third – subsequently earning promotion via the play-offs. Gareth Ainsworth’s side went up as underdogs, though, grinding out narrow victories built on a supremely organised defence and posting the league’s eighth-worst non-penalty expected goals average (1.04 NPxG/game) and 11th-worst non-penalty goals/game figure (1.16). Now, they’re an attacking force, having increased their NPxG output by 42.3% to 1.48/game – the fourth-best in the division – and scored 35 non-penalty goals at a rate of 1.59/game.

Cheltenham might be competing alongside Wycombe right now if they’d had a better goalkeeper. Based on their NPxG/game of 1.5, last season’s League Two champions are the third-most creative team in League One at the moment – a remarkable reflection of the job manager Michael Duff has done.Poor finishing has played its part in Cheltenham only sitting 14th in the table, but more telling is the fact that they’ve let in 40 goals from 27.77 NPxG against – the worst performance relative to NPxGA of any team in the league. The Robins haven’t routinely faced freakishly good finishing and got unlucky; they’ve just been lacking between the sticks – where Duff has recently dropped Scott Flinders and restored Owen Evans to the lineup. Nevertheless, that top six-standard NPxG data reinforces the point that League One’s little fish can have a big bite.

Clash of the Tacticians

We’ve established that footballing worlds collide in League One – but it is also arguably the most stylistically heterogenous of England’s top four divisions. Markedly contrasting approaches succeed here.

Leaders Rotherham (the ultimate yo-yo team) look like they’re going to stroll to a third promotion to the Championship in five years. With a direct speed of 2.1 metres/second, the Millers advance the ball upfield quicker than any team bar Wycombe (2.38 m/s). Paul Warne’s side also average a league-high 2.27 direct attacks/game. Spartan? Not in the slightest; their underlying numbers – league-best figures of 1.86 NPxG/game and 0.77 xGA/against – pin them as the team to beat in the race for promotion. They have performed in line with those outputs, too, bagging the most goals (40 at 1.81/game*) and conceding the fewest (15 at 0.68/game).

In second, though – and with a slightly higher PPG, having played a game less – are a team at the opposite end of the scale: Wigan. The Latics rank second by direct speed (1.21 m/s) to Ipswich (1.17 m/s) – while only four sides average more passes/sequence than their 3.11.

Looking at the absolute extremes of the style scale, League One’s slowest and most intricate side – MK Dons – sit ninth, four points off the play-off spots, while the fastest and most direct team are fourth-placed Wycombe. Ultimately, the only right way to play is the one which works for you.

Who’s top scorer in the Premier League at the moment? Mo Salah of second-placed Liverpool. In the Championship? Aleksandar Mitrović of leaders Fulham. In League Two? Dominic Telford of sixth-placed Newport County. And in League One? Thirteen-goal Cole Stockton of … 21st-placed Morecambe.Yep, League One’s deadliest marksman plays for a team currently in the relegation zone. And joint-third on the list Joe Ironside of Cambridge – who are 16th. Sunderland’s Ross Stewart and Ipswich’s Macauley Bonne join Ironside on 11 goals, while Rotherham’s Michael Smith has struck 12 times and Wigan’s Will Keane 10 – but, at this stage, there is every possibility that the 2021-22 League One Golden Boot will go to someone playing for a side who don’t even finish in the top half. It’s the kind of quirk to which the ostensibly nonsensical nature of this league seems to lend itself, though.