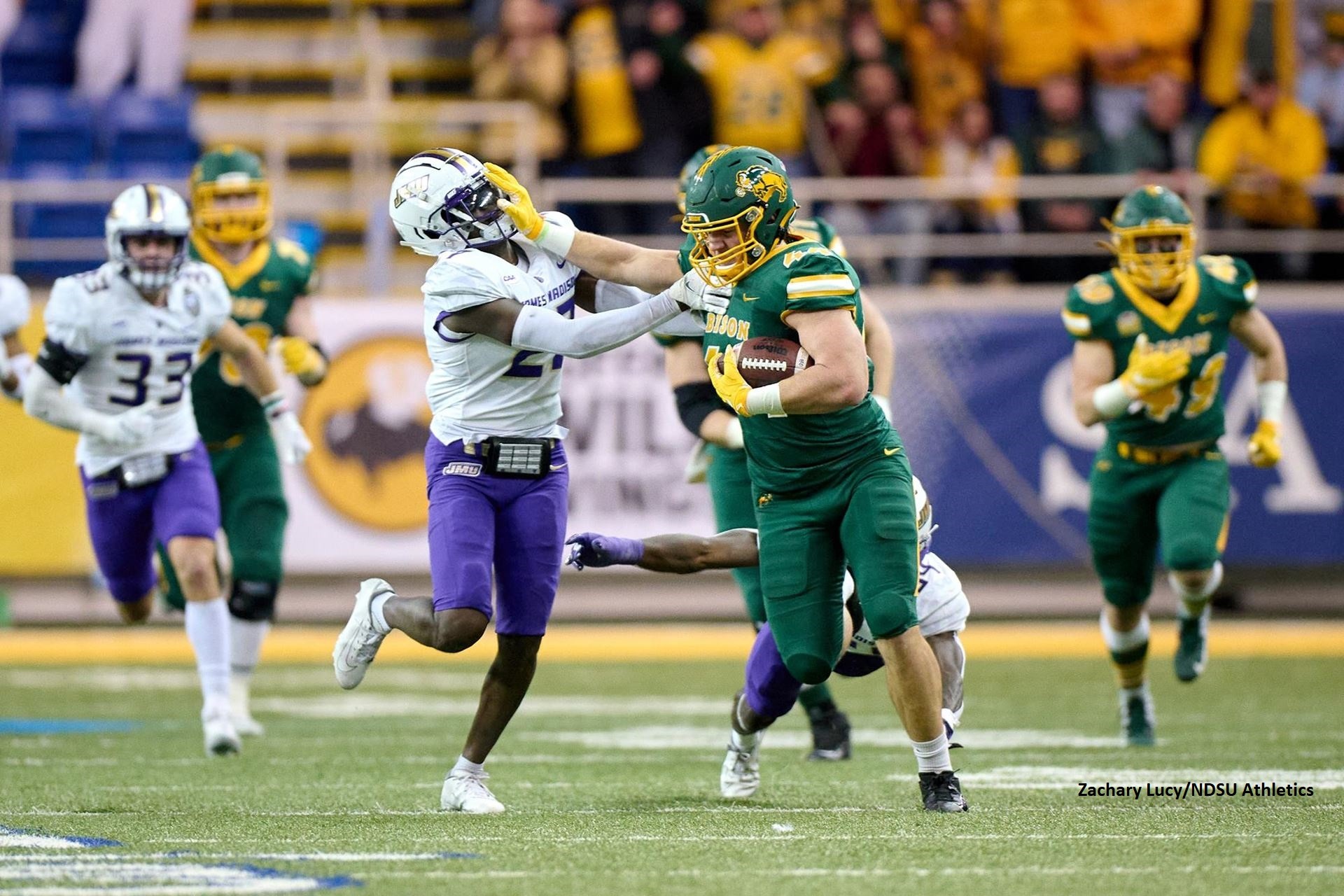 Montana State has already won in Texas during the FCS playoffs, and the Bobcats are headed back there, where another victory would be even bigger than their elimination of defending national champion Sam Houston.

They’ll be trying to take down FCS dynasty program North Dakota State in the national championship game on Jan. 8 at Toyota Stadium in Frisco.

This weekend’s semifinals lived up to their advance billing as North Dakota State (13-1) held off James Madison, and Montana State (12-2) defeated South Dakota State, the only team to beat the Bison this season.

NDSU is 8-0 all-time in Frisco, and the offensive coordinator on its first three FCS title teams from 2011-13, was Brent Vigen, Montana State’s first-year coach.

Here’s a quick review of their semifinal-round wins:

How The Game Was Won – After falling behind for the first time 14-13, North Dakota State answered on the ensuing possession with a go-ahead touchdown early in the fourth quarter, then held off James Madison on its final three drives to win the most anticipated game of the FCS season.

Key Stat – James Madison entered the game with an FCS-leading +21 turnover margin, but was -2 on a pair of interceptions in the NDSU end zone. The Bison led 10-0 in the second quarter when safety Dawson Weber picked off Dukes quarterback Cole Johnson in the second quarter, and cornerback Destin Talbert used a leaping one-handed catch to deny a potential score with 3:05 left and protect the 20-14 lead.

Up Next – NDSU seeks to add to its record eight FCS championships against a Montana State program it’s beaten in their last three meetings – all in the playoffs since 2010.

How The Game Was Won – Montana State trailed for only 2 minutes, 33 seconds, finishing on a 21-3 run while continuing to ride the playoff excellence of freshman quarterback Tommy Mellott, defensive end Daniel Hardy and linebacker Troy Andersen.

Game Balls – Mellott racked up 384 yards of total offense (229 passing, 155 rushing) and accounted for all four MSU touchdowns – two on runs and two more on passes to wide receiver Lance McCutcheon. Andersen had 10 tackles, including nine solos and one for loss, while Hardy collected six tackles, two sacks and forced and recovered a fumble.

Key Stat – SDSU was limited to 124 net rushing yards, well below its pregame average of 218.5, which ranked eighth-best in the nation. Pierre Strong Jr. rushed for 94 yards, but Isaiah Davis, who had 499 yards and six TDs in the Jackrabbits’ three playoff games, was a non-factor with 13 yards on 10 carries.

Up Next – While the Bobcats have lost three straight matchups with North Dakota State, they enter the FCS championship game with a 21-15 all-time series lead. Their only other appearance in the title game was a 19-6 victory over Louisiana Tech in 1984 in Charleston, South Carolina.