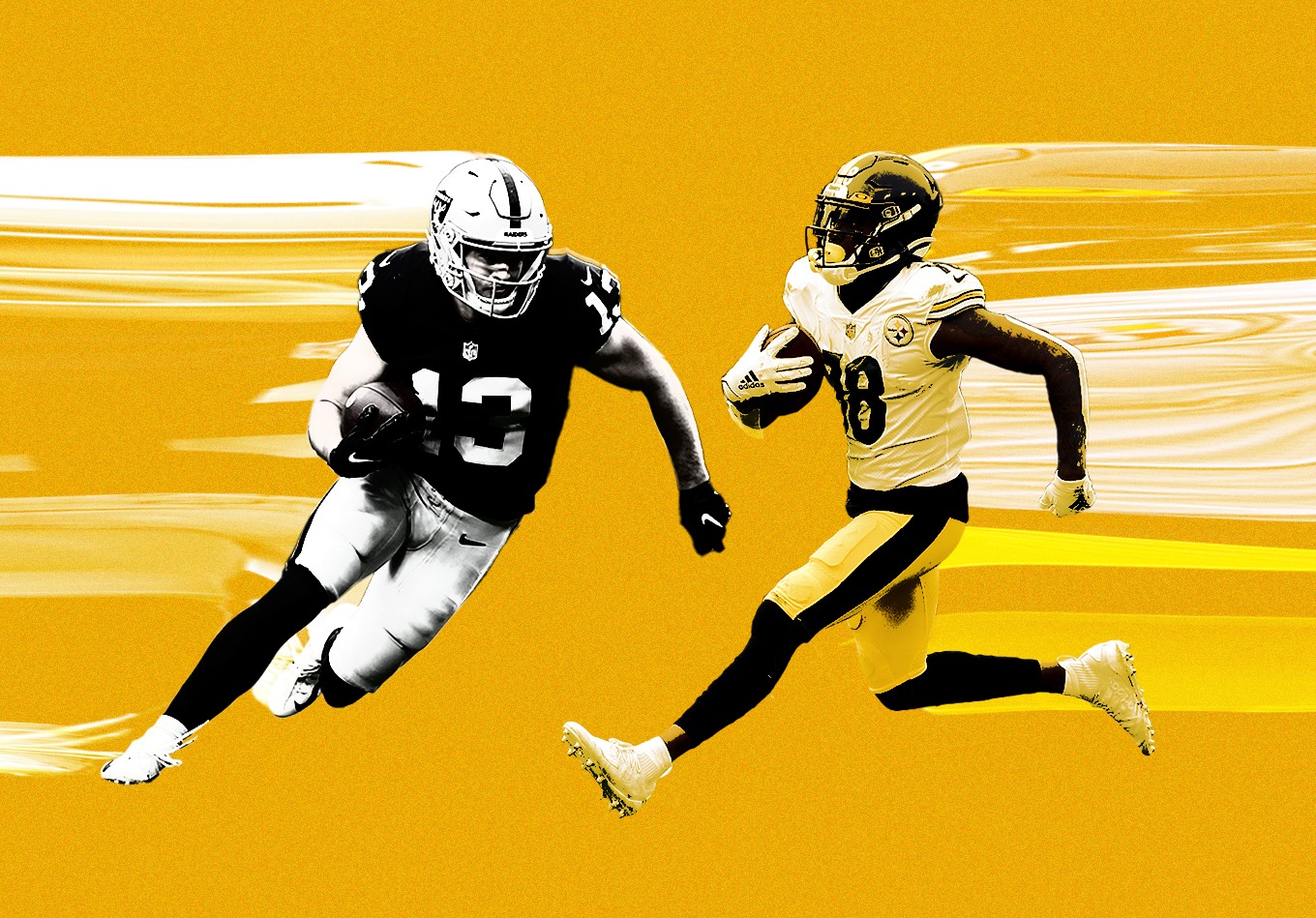 This makes it a good time to take a step back and take a quick look at some of the projections we made entering the season. Here are five players that we discussed during our preseason piece and how they’re doing now.

Let’s start with a couple of wide receivers we got right.

Diontae Johnson (ADP: WR22, Current: WR24): The main reason Johnson was one of our key wide receivers to draft earlier than his ADP was the volume of targets he had a history of receiving. That has not slowed down this year, as he ranks third in the NFL in targets per game (10.5).

On the surface, Johnson’s rank as WR24 wouldn’t qualify as a success. However, he’s missed a game through injury and the Steelers have already had their bye week. In six games played this season, Johnson has averaged 17.98 PPR points per game. For some context, that’s more than Mike Evans, who enters Week 9 as WR8.

In fact, through six games, Johnson’s lowest output in any game is 14.6 fantasy points. That number, his lowest single-game output, is higher than any other wide receiver’s worst game. Johnson has been a legit WR1 when healthy this year.

Jakobi Meyers (ADP: 57, Current: WR30): He’s going to score eventually. It’s going to happen. It has to happen. There may be a party at The Analyst when it does. In the meantime, we’ll continue to point out just how well Meyers is performing despite not getting into the end zone.

He’s scored at least 9.4 PPR points in every week but one so far this year, though he also hasn’t recorded a single week with 20 points. If you have Meyers, you weren’t hoping for a WR1 performance. But with an ADP that indicated Meyers was going undrafted in plenty of leagues, he’s been a solid contributor if you have him.

Jonathan Taylor (ADP: RB8, Current: RB2): Maybe the player our models were most wrong about through the first half of the season, Taylor has picked up right where he left off to end his rookie season.

Interestingly, some of the worries baked into our projections regarding Taylor’s season have played out. We had noted how Taylor’s touches would likely diminish entering this year because of the crowded backfield situation in Indianapolis and how that could alter his standing in fantasy from an RB1 to a high-end RB2. In his last six games in 2020, Taylor averaged 22 touches per game. So far this season, even including his explosion on Thursday night, he’s only had 22 touches in a game once – and it came in Week 1.

It hasn’t mattered, because Taylor has scored at least one touchdown in six straight games and led all running backs entering Week 9 in yards before contact (3.93). His decline in touches has not hurt his overall production. He’s a rock-solid RB1.

DK Metcalf (ADP: 4, Current: WR5): The main concern with Metcalf entering the season was consistency. We knew he would have some big, week-winning performances, but with the fewest receptions among players with 120 targets last season, he was a risky wide receiver to draft so early.

So far this season, Metcalf has recorded at least 11 PPR points in all eight games, to go along with three top-10 weekly performances. He’s been solid despite not getting to play with Russell Wilson for the first time in his career.

With the Seattle Seahawks on a bye and Wilson coming back soon, it seems likely that Metcalf can continue this performance. There’s still half the season remaining, and our projections pegged Metcalf to finish the season as WR16. However, through eight weeks, he’s been undeniably worth his draft status.

Cooper Kupp (ADP: WR19, Current: WR1): Let’s end with one more positive. Before the season, we called Kupp “the player who is currently the most undervalued in all of fantasy football.”

We highlighted two key factors in suggesting Kupp was being undervalued: upgrading from Jared Goff to Matthew Stafford, and a return to the mean in touchdowns after only scoring three in all of 2020. Well, he leads the NFL in so many stats that a graphic is necessary to list them all, and he’s already scored more fantasy points this year than he did last season – when he finished as WR26.

Of course, not even our models saw this coming. We were confident Kupp would finish as a top-10 wide receiver. Currently, however, Kupp is on pace for the greatest fantasy season by a wide receiver ever. Our advice to Kupp’s fantasy managers? Ride the wave and enjoy it while it lasts.

As always, let’s jump around and evaluate some Week 9 projections gathered from some of the top data-driven projections available using several of our AI-powered models. We’ll get into some yays and nays before highlighting a few DFS value plays.

Ben Roethlisberger, QB (PIT) vs. CHI (ECR: 22, Our Rank: 11): Our models are projecting Roethlisberger to have a near top-10 finish against a struggling Chicago Bears defense that isn’t expected to have Khalil Mack.

Over the last three weeks, the Bears defense has allowed quarterback finishes of QB7, QB5 and QB2. And over the course of the season, the Bears’ defense ranks last in the NFL in three-and-outs (9), giving opposing quarterbacks plenty of opportunities to notch some fantasy points.

Meanwhile, Big Ben has produced much better fantasy stats at home this season. In four games at Heinz Field, he’s averaging just a shade under 275 passing yards per game (273.5) and three of his four biggest fantasy outputs this season have been at home.

With the Pittsburgh Steelers on a three-game winning streak and welcoming the Bears on Monday night, our models like Big Ben’s chances of adding another quality start. He’s not going to score 30, but if you need to stream for this week, Roethlisberger is a solid option.

Nick Chubb, RB (CLE) vs. CIN (ECR: 11, Our Rank: 6): Among the 17 running backs with at least 90 carries on the season, Chubb’s 2.26 yards after contact per rush ranks first and the rate at which he forces a defender to miss a tackle per touch (0.24) is second. As a result, Chubb is one of two running backs we project to rush for over 100 yards this week.

There isn’t a large discrepancy between Chubb’s ECR and where we’re ranking him this week. The reason we’re highlighting Chubb is that this is the first time in nine weeks we’re higher on Chubb than industry consensus. Without Kareem Hunt to steal touches, Chubb is a set-and-forget RB1 this week.

Hunter Renfrow, WR (LV) vs. NYG (ECR: 30, Our Rank: 11): Possibly our biggest surprise this week, Renfrow is a borderline WR1 this week. He faces a New York Giants defense that has allowed 15 catches per game to wide receivers over the last three weeks.

Renfrow has recorded at least five receptions and 50 receiving yards in six of the Raiders seven games this season. And he’s recorded the most catches among Raiders’ wide receivers in all seven games. His floor is rock solid. With some new opportunities likely to arise, our projections are bullish of Renfrow recording seven catches and 80 receiving yards this week.

He’s not a sexy play, and he’s not likely to give you a 30-point performance. But if he can get in the end zone, 20 PPR points is well within his reach.

Jordan Love, QB (GB) vs. KC (ECR: 18, Our Rank: 27): This game was supposed to be a quarterback showdown between Aaron Rodgers and Patrick Mahomes. Unfortunately for all football fans, we aren’t getting that this week. Instead, Jordan Love will make his first career start, in Arrowhead.

In terms of defenses, the Kansas City Chiefs are one of the friendliest Love could be encountering in his debut. The Chiefs allow the most yards on first-down plays (7.05) and the most overall yards per play (6.43). It’s not out of the question Love could have a solid debut. But with Mahomes on the other sideline, our projections are expecting Green Bay Packers running backs to combine for 28 carries this week.

With a likely conservative offensive game plan in a hostile environment, Love is projected to be one of only four quarterbacks with less than 30 passing attempts. He’s not going to have enough opportunities to be a reliable fantasy option.

Zack Moss, RB (BUF) vs. JAX (ECR: 16, Our Rank: 28): Moss and the Buffalo Bills get the woeful Jacksonville Jaguars this week in the most lopsided matchup of the week. If the Bills are up early and a lot, Moss could become a viable play this week.

However, Moss has only recorded more than 14 touches once in his career. Meanwhile, for all of the Jaguars’ faults (and there are plenty), they possess a strong rush defense. It leads the NFL in fewest carries allowed of 10 or more yards and 20 or more yards and ranks third in yards allowed per carry (3.70).

Josh Allen is our top projected quarterback for this week. Stefon Diggs is our WR2 for the week. Cole Beasley is WR15 and Emmanuel Sanders is WR19. This is a week for the Buffalo passing attack. Moss is a high-end RB3 this week.

Deebo Samuel, WR (SF) vs. ARI (ECR: 4, Our Rank: 25): One of the quarterbacks projected for fewer passing attempts than Love this week: Jimmy Garoppolo.

You’re playing Deebo if you have him. He’s WR4 this season. If Cooper Kupp doesn’t lead wide receivers in a counting statistic, it’s likely because Deebo does. He leads the NFL in receiving yards per game (117.0) and yards after catch (415). He’s been fantastic. But in a run-first offense and George Kittle expected back this week, the opportunities for Deebo just aren’t going to be as plentiful as they have been.

Samuel is always capable of breaking a big play. He did so last week against Chicago when he took a screen pass for 83 yards. However, relying on big plays is never a recipe for success. Projected to catch fewer than five passes this week (4.8), Samuel is a risky WR2 this week.

Jaylen Waddle, WR (MIA) vs. HOU (DK Price: 5,600): With the news that Davante Parker is now trending towards being unavailable this week, Waddle regains WR1 status in the Dolphins offense. With at least 12 targets in two of his last three games, Waddle has a strong chance of delivering a top-notch performance against a weak Houston defense.

Darren Waller, TE (LV) vs. NYG (DK Price: 6,200): Not only do the models think Renfrow is in for a big game, but Waller is one of our top-10 projected position players for this week. At a price usually reserved for WR2’s, Waller is our top value play of the week. 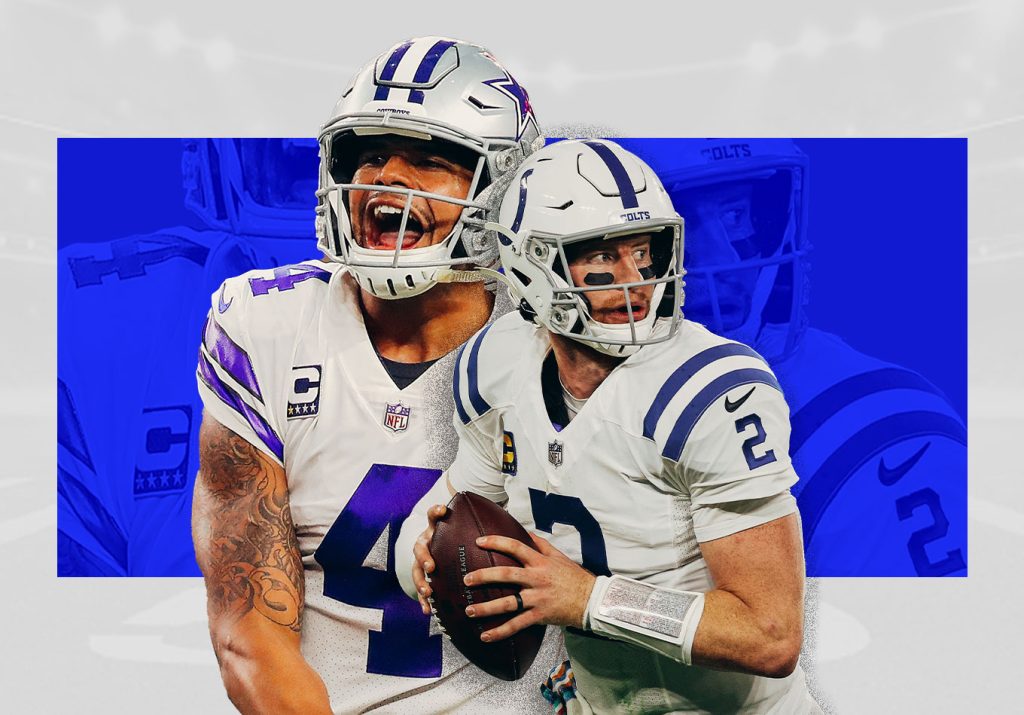 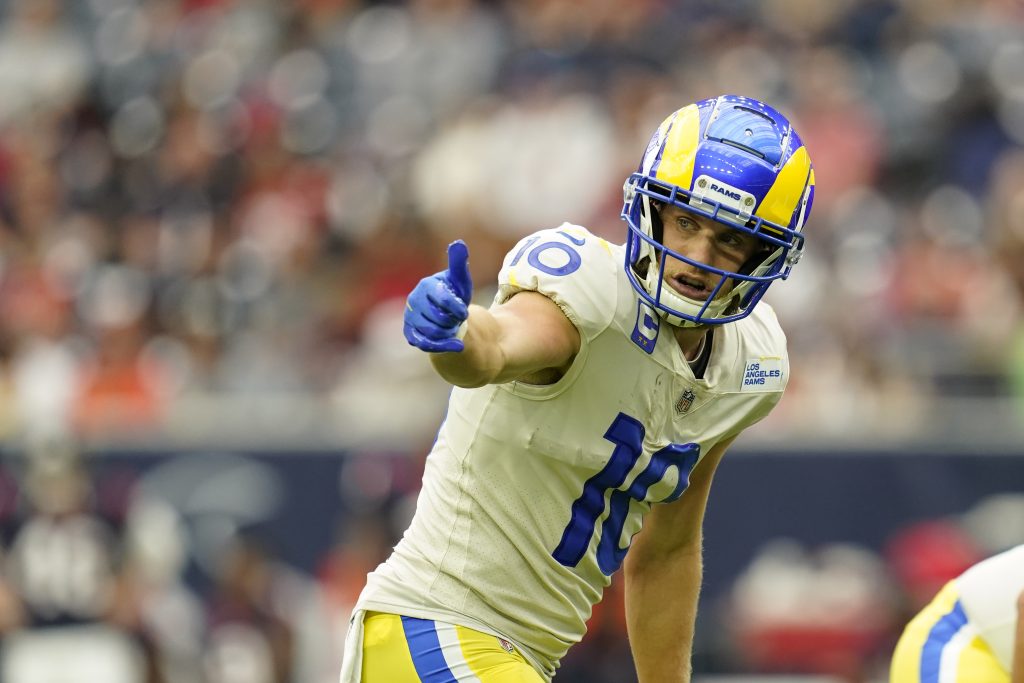 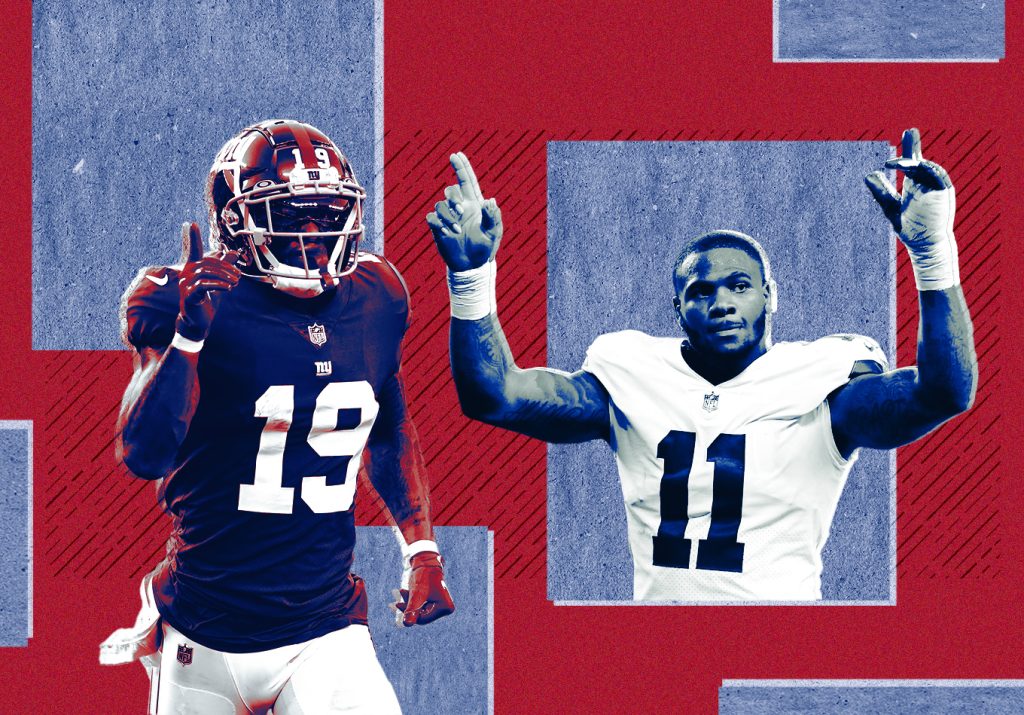 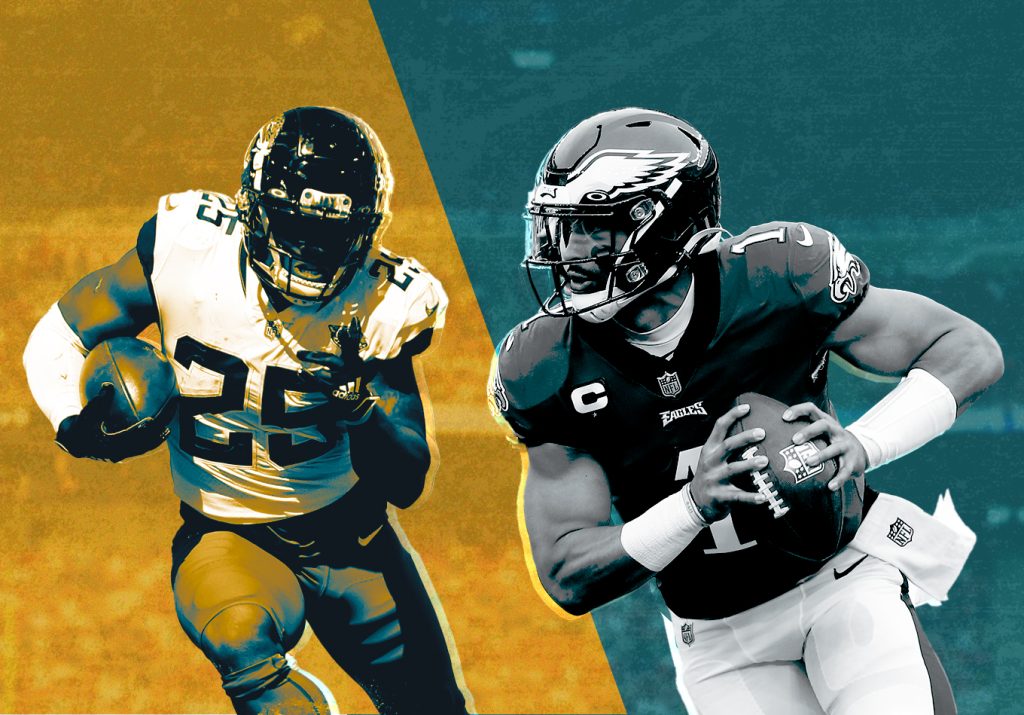