It Was Their Year: The NFL All-Time Single-Season Records | The Analyst 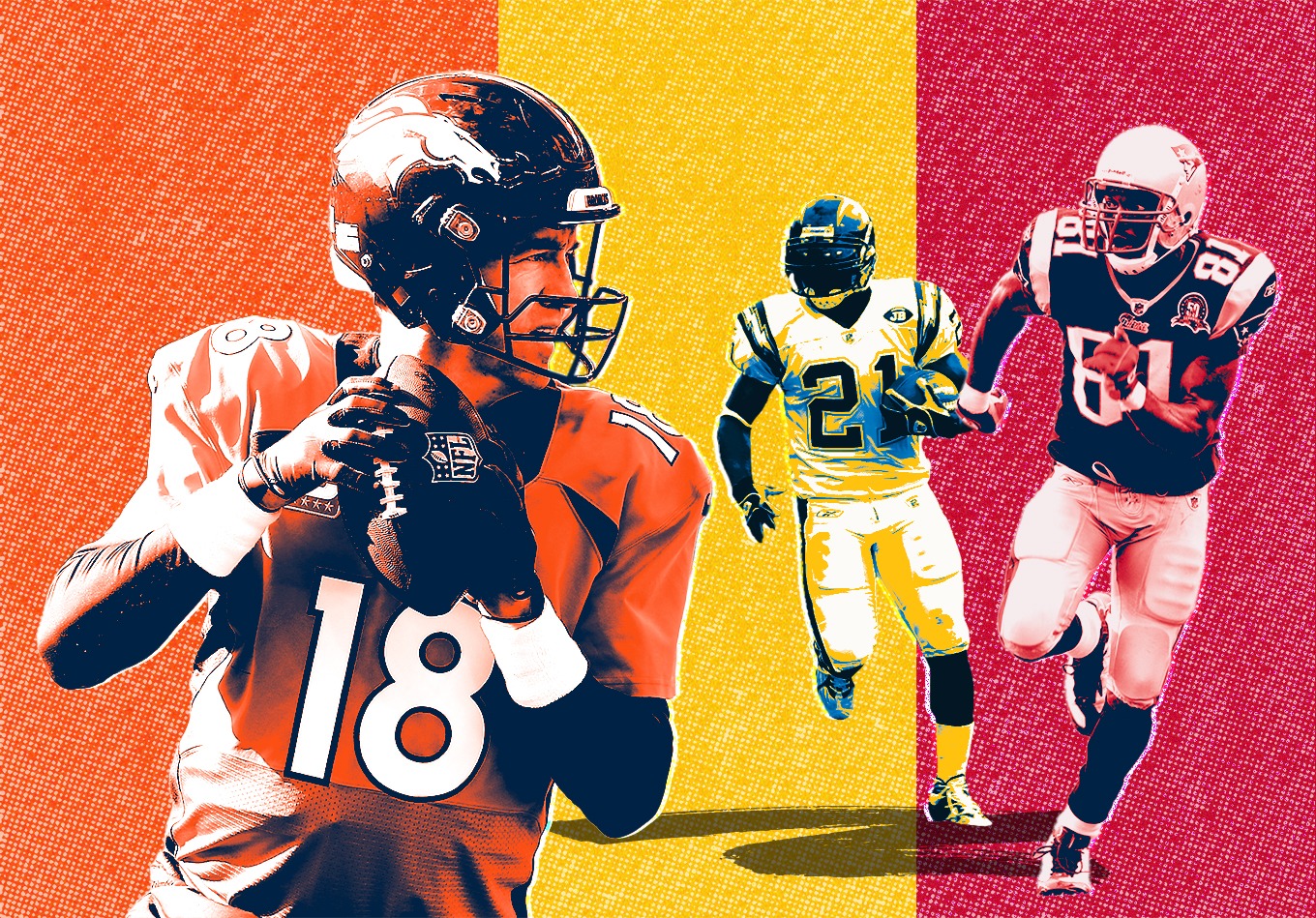 It Was Their Year: The NFL All-Time Single-Season Records

The new 17-game slate in the NFL will have many consequences, but chief among them is the potential for several records to be broken.

The extra regular-season game means several season total records will be challenged, but which among the most popular records will likely be broken soon?

To find out (and mostly, just to reminiscence on the amazing seasons), we’re taking a look at the best single seasons in AFL+NFL history.

Most Passing Touchdowns: Peyton Manning with 55 in 2013

Manning may have won his Super Bowl with the Denver Broncos as more of a game manager in the 2015-16 season, but he was a few years removed from the best statistical season of all time. He surpassed the yardage record set by Drew Brees in 2011 by a single yard with 13 seconds in the first half of his Week 17 game. Manning sat out the second half after building a 31-0 lead. He was a legend with the Indianapolis Colts and didn’t miss a game in his first 13 seasons. But he never threw for 5,000 yards in a season until he went to Denver.

The touchdown record is even more impressive and will likely be the harder one to break. Even with the extra game, a quarterback would have to average about 3.29 touchdown passes per game to best Manning’s 55 TDs, and no other quarterback ever did that in a 16-game season.

Most Passing Interceptions (All Time): George Blanda with 42 in 1962

Most Passing Interceptions (Super Bowl Era): Vinny Testaverde with 35 in 1988

While it would be impressive if someone topples Manning’s touchdown record, it would be downright shocking if anyone matches George Blanda’s 42 interceptions for the Houston Oilers.

Blanda led the league in interceptions four times, and his 42 were seven more than Testaverde’s Super Bowl-era record for the Tampa Bay Buccaneers in 1988. And with NFL teams more conscious than ever in maintaining possession, it’s highly unlikely any passer would be allowed to throw almost 2.5 interceptions per game and keep his job. Jameis Winston, another former Buccaneer, is the only quarterback since 2000 to throw even 30 interceptions in a season when he did so in 2019.

Dickerson exploded onto the scene with a rookie record 1,808 yards for the Los Angeles Rams in 1983, then set the all-time league record the following year. He averaged an incredible 131.6 yards per game to become the second running back ever to run for over 2,000 yards in a season (O.J. Simpson was the first in 1973). Since then, six other running backs have joined that club, but none have topped him in yardage.

Derrick Henry of the Tennessee Titans was the only player with a realistic shot at the rushing record in 2021 before getting injured. He was lapping the field in rushing, so hopefully, he can get fully healthy and make a go at challenging Dickerson in the future.

Most Rushing Touchdowns: LaDainian Tomlinson with 28 in 2006

It was fantasy football heaven in the early to mid-2000s. In 2003, Priest Holmes set the rushing touchdown record with 27. Just two years later, Shaun Alexander tied the record. And the year after that, Tomlinson edged them both out with 28 of his own.

The rushing touchdown leaderboard hasn’t looked as impressive recently, as most teams run less and split carries as opposed to using a bell-cow running back. LeGarrette Blount has had the most rushing touchdowns by anyone since 2010 with 18 in 2016. When Derrick Henry went down in 2021, it meant that LT’s touchdown record would be safe for at least one more year.

We’ve already mentioned Drew Brees, who shined with the New Orleans Saints after starting his career with the San Diego Chargers. Brees holds three spots in the top five in terms of most passing yards in an NFL single season. (Besides Peyton Manning, Tom Brady holds the third spot with 5,235 passing yards in 2011.)

There has been a plethora of talented receivers coming into the league over the past few decades, but Megatron stands alone as the only receiver with a 1,900-yard season. He also had a career-high 122 receptions in 2012. It helped his cause that the Detroit Lions went 4-12 and were often trailing, thus forcing them into a lot of passing situations. But considering tight end Brandon Pettigrew was the second-leading receiver on the team with 567 yards on the year, it remains incredibly impressive that Johnson was able to put up that many yards when every defense did everything they could to slow him down as the only real threat on the team. In 2021, Kupp came 17 yards short of tying Johnson’s record, as he compiled an impressive 1,947 receiving yards for the Super Bowl LVI champs. Julio Jones of the Atlanta Falcons is third on the single-season list with 1,871 yards in 2015.

Most Receiving Touchdowns: Randy Moss with 23 in 2007

There was plenty of talented players to watch when the 2007 New England Patriots took the field, but no one was as captivating as Moss, who had the best season of his storied career.

The Patriots were one quarter and one helmet catch away from an undefeated season, and the Brady-to-Moss connection was perhaps the biggest reason why, as teams couldn’t stop them. The former Minnesota Vikings star edged the mark Jerry Rice set with the San Francisco 49ers in 1987 by one, and the two of them are the only players ever with more than 20 touchdowns in a year. Davante Adams tied the third-place mark in 2020 with 18.

Most Defensive Interceptions (All Time): Dick “Night Train” Lane with 14 in 1952

Most Defensive Interceptions (Super Bowl Era): Lester Hayes with 13 in 1980

As mentioned in our dive into the rookie records, Lane set the record for interceptions when he was a rookie, and it has stood for over 60 years. Not a bad first impression.

The most recent of the 13 players with at least 12 picks in a season was Hayes of the Oakland Raiders in 1980, so it might seem that Lane’s record is safe, but big interception totals made a comeback in 2020. Xavien Howard became the first player since Antonio Cromartie in 2007 to have 10 interceptions, and J.C. Jackson had nine. In 2021, Dallas Cowboys cornerback Trevon Diggs picked off 11 passes. Still, with how much fewer quarterbacks are possession-conscious now than in the 1950s, it’ll be really difficult for someone to have a shot, even with one more game.

Everyone remembers Strahan’s NFL record-breaking sack that consisted of Brett Favre of the Green Bay Packers falling down and Strahan landing on top of him, and conspiracy theories abound as to whether Favre intentionally gave himself up so the New York Giants star could have the regular-season record (including objections from the previous record-holder Mark Gastineau, who claims his record of 22 sacks, which has since been matched by Jared Allen and Justin Houston, is the real record).

But Favre and Strahan both deny any planned arrangements, and the single-season record book acknowledges Strahan’s dominant 2001 season as the one with the most sacks.  And a controversial ending doesn’t nullify the other 21.5 sacks Strahan had that year or his league-leading six forced fumbles.

Watt, a star defensive end for the Pittsburgh Steelers, matched the record in Week 18 of the 2021 season with a sack of Baltimore Ravens quarterback Tyler Huntley. Watt only needed 15 games to reach 22.5 sacks, which was one game less than Strahan.