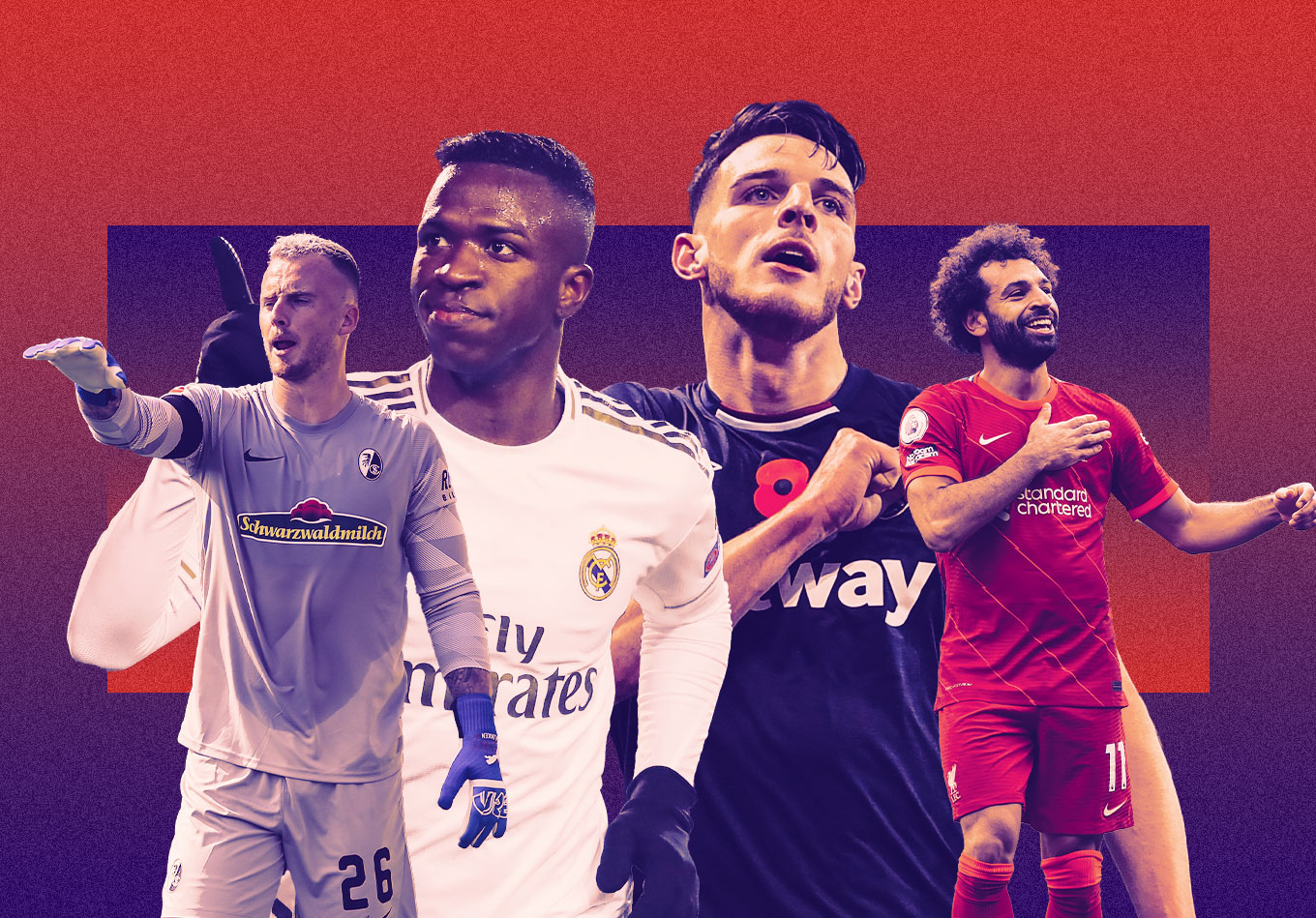 We’re now four months into the domestic season, with this an ideal time to look at some of the players across the big five European leagues to have impressed so far in 2021-22. Some are obvious, some less so – but the data tells us that they are players to keep an eye on for the rest of the campaign.

Since making his Serie A debut in 2016 Giovanni Simeone has endured peaks and troughs. Being the son of Diego brings its own pressures, but his performances in 2021-22 so far suggests he’s coping just fine.

Back in 2017-18, Simeone netted 14 times in Serie A for Fiorentina – a record that’s under threat this season with the 26-year-old currently on nine goals before December. His nine goals are the most ever scored by a Verona player in their first 12 Serie A matches in a single season, while five of these have been the first goal of the match: another league high.

Since Igor Tudor’s appointment as Verona manager on September 14, Simeone has scored nine goals in nine appearances to be the leading scorer across the big five European leagues across those two months – two more goals than players like Robert Lewandowski and Mohammed Salah (7).

Converting a ridiculous 56.3% of shots, his nine goals have come from shots totalling just three expected goals – with the Verona forward having the biggest over-performance across Serie A in 2021-22 (+6). We should probably expect a fall in his scoring numbers in upcoming months based on this data, but Simeone is certainly enjoying the ride while he’s on it.

Napoli are enjoying one of their best starts to a Serie A season, with their total of 32 points from the opening 12 games only being replicated once before – in 2017-18 when they eventually lost out to Juventus for the title.

We recently looked at how Napoli have played in the Italian top-flight this season under new manager Luciano Spalletti; their easy-on-the-eye style of play demanding quick yet effective passing. No player epitomises that in this Napoli side more than Fabián Ruiz, with the midfielder leading the Serie A ranks for both overall passes completed (834) and successful passes in the opposition half of the pitch (526).

Ruiz has been involved in 75 open play shot-ending sequences, with only Internazionale’s Nicolò Barella (76) having more. 44 of these (59%) have been in the build-up to shots, rather than taking the shot or creation of the shot, showing his importance to the less appreciated parts of shot construction.

Despite this, the Spanish midfielder has already been involved in more goals in the 2021-22 Serie A season (5) than in the whole of the last campaign (4).

Picking the best performing players from the Bundesliga is an easy job – you usually look no further than Robert Lewandowski, who is once again proving his class and having an exceptional 2021-22, but that would be too obvious.

SC Freiburg are enjoying a fantastic season so far, third in the Bundesliga table ahead of the resumption of the league following the international break – six points behind leaders Bayern and two points off Dortmund in second. One of the key players in this start has been goalkeeper Mark Flekken.

Excluding own goals, Flekken has conceded just eight goals from 48 shots on taget in the Bundesliga in 2021-22 so far – this despite facing shots with an expected goals on target (xGOT) of 13.2. As a result, his goals prevented total of 5.2 is the most by any Bundesliga goalkeeper.

The 28-year-old has spent a large proportion of his career in the German lower leagues, having made as nearly many appearances so far this season in the Bundesliga (11) than he had across his previous three campaigns in the top-flight combined (14). He’s certainly making up for lost time.

Yes, we’ve taken the easy option and selected a Bayern Munich player in our list of 10 – but Bayern are top of the league and impressing once again.

Joshua Kimmich has been the most used player for Bayern in the Bundesliga this season, with the German international having played 972 of a possible 990 minutes across the 11 games so far. Integral to how the record Champions play, Kimmich has completed the most passes both overall (765) and in the opposition half (409) for the club in 2021-22, as well as making the most interceptions for them in the German top-flight (15).

Kimmich’s importance and involvement in Bayern’s passing sequences this season cannot be underestimated – he’s been involved in a league-high 709 open play passing sequences, of which 45 have seen him involved in the build up without having the shot or creating the chance himself. Those 45 involvements are a league high, but often go unnoticed with Kimmich not playing the final part of the move. The Bayern midfielder has also started 15 open play passing sequences that have ended in a shot for Bayern in 2021-22, which is only behind teammate Leon Goretzka.

Kimmich has already scored three goals in 11 league appearances this season, being only one goal behind his tallies across the last two seasons: four goals in 27 games in 2020-21 and four in 33 appearances in 2019-20.

Mohamed Salah has already been involved in 17 goals in 11 Premier League appearances for Liverpool this season (10 goals, seven assists) – even by his standards a phenomenal start. These 17 goal involvements can only be matched by Karim Benzema across the big five European leagues in 2021-22 so far, while only Luis Suárez (21 in 2013-14) and Harry Kane (18 in 2020-21) have been involved in more across their opening 11 appearances to a single Premier League campaign.

Expect more to come this weekend, too. His Liverpool side host Arsenal on Saturday, with Salah being directly involved in nine goals in nine Premier League games against them (seven goals, two assists), while at Anfield he has scored four times and assisted two more for Liverpool in four league appearances against Arsenal.

As well as having the fourth-highest expected assists total from open play in the Premier League so far this season (2.15), Salah leads the expected goals ranking with 6.5 from non-penalty shots.

Declan Rice is building on a fantastic summer across Euro 2020 for England with an impressive 2021-22 Premier League season at West Ham, so far.

Despite the additional rigours of European club football following a summer packed with international appearances, Rice doesn’t seem to be tiring so far for the Hammers and has been an integral part of their Premier League success this campaign.

Rice has become one of the most accomplished passers amongst England players over the last few years, with his 2021-22 passing success rate of 92% level-best with Man City’s Rodri amongst all midfielders and forwards to play 500+ passes in the Premier League. That success rate only drops to 91% in the opposition half, while he’s completed 153/170 ending in the final third of the pitch across 990 minutes (90%).

Rice’s end product has also improved, with his three goals and three assists in 2021-22 already tallying to a career-high six goal involvements in a single season across his competitive club career.

As Alex Keble revealed on The Analyst last week, Rice tops the Premier League charts for carry distance (2,680 metres) and is fifth for upfield progress with the ball at his feet. After charging forwards, Rice has the confidence and assuredness to find a teammate, only Mohammed Salah has more assists than him following a ball carry. Rice has openly expressed he’s trying to improve the ball-carrying part of his game, and the numbers show this. Over the course of the last five season, his progressive carry numbers (dribbling the ball five metres or more up the field) have consistently increased.

Despite finding themselves behind Real Sociedad in the La Liga table and a shock Champions League defeat to Sheriff Tiraspol, Real Madrid are enjoying a pretty successful 2021-22 campaign so far. A key reason for that is the performance of Brazilian youngster Vinícius Junior.

Together with Karim Benzema, the pair have scored 17 La Liga goals this season – a tally only bettered as a pairing across the big five European leagues by Bayern Munich’s 19-goal duo Robert Lewandowski (13) and Serge Gnabry (6).

Rayo Vallecano have enjoyed an impressive return to La Liga following their playoff promotion from the second-tier last season – they currently find themselves sixth in the table and only three points off the top four.

A major player in their strong start has been central defender Alejandro Catena, who before 2021-22 had only made two top-flight appearances in his career – both with Rayo in their last La Liga campaign in 2018-19.

A ball-playing centre half, Catena has completed more passes than any other player at Rayo Vallecano in 2021-22 (469), with a 79% success rate. His importance to the team can be shown by the fact that he’s not missed a single minute of action in La Liga this season (1170).

Strasbourg’s Habib Diallo has scored seven goals so far in the 2021-22 Ligue 1 campaign, a total that only Gaëtan Laborde and Jonathan David (eight) have surpassed. However, with only 633 minutes to Diallo’s name, the Strasbourg star has averaged a goal every 90 minutes this season in the French top-flight – the best ratio of the 13 players to have found the back of the net on at least five occasions in 2021-22.

After 26 goals for Metz in their Ligue 2 title winning season in 2018-19, Diallo followed that up with 12 top-flight goals for the club in 2019-20 before making the move to Strasbourg last season. Since then, only Ludovic Ajorque (21) has more Ligue 1 goals for the club than Diallo (16), but the Senegalese forward has a superior minutes per goal ratio (185).

Strasbourg be lucky enough to have that Diallo/Ajorque partnership, with the pair producing 12 Ligue 1 goals this season (seven and five respectively), more than any other duo across Ligue 1 in the opening four months of the campaign.

Big things were expected from Mattéo Guendouzi following a strong start to his Arsenal career under Unai Emery, but a string of disciplinary issues eventually saw his playing time in England limited, with Mikel Arteta eventually freezing him out of north London.

Following a spell on loan in the Bundesliga at Hertha Berlin in 2020-21, Guendouzi signed for Marseille on loan in the summer with a view to the move being made permanent upon completion of his temporary stay. So far, the signs suggest that Marseille are getting the best out of the occasionally hot-headed midfielder.

On a more basic level, Guendouzi has impressed with a team-high 368 successful passes in the opposition half and 13 open play chances created – a tally only Dimitri Payet has bettered for the club in Ligue 1 this season (24). Drilling down further, it is only Payet again who has been involved in more open play attacking sequences than the Arsenal loanee (55 vs. 51).

Guendouzi’s ability to progress the ball upfield at his feet is a big reason why he earned a recall to the French senior squad for their recent international qualifiers, with the Marseille midfielder having the second-highest tally of ball carries (248) and distance travelled with carries (2,693m) in Ligue 1 across 2021-22 so far, behind only Angers’ Jimmy Cabot.