Played One... And Done | The Premier League's One-Hit Wonders 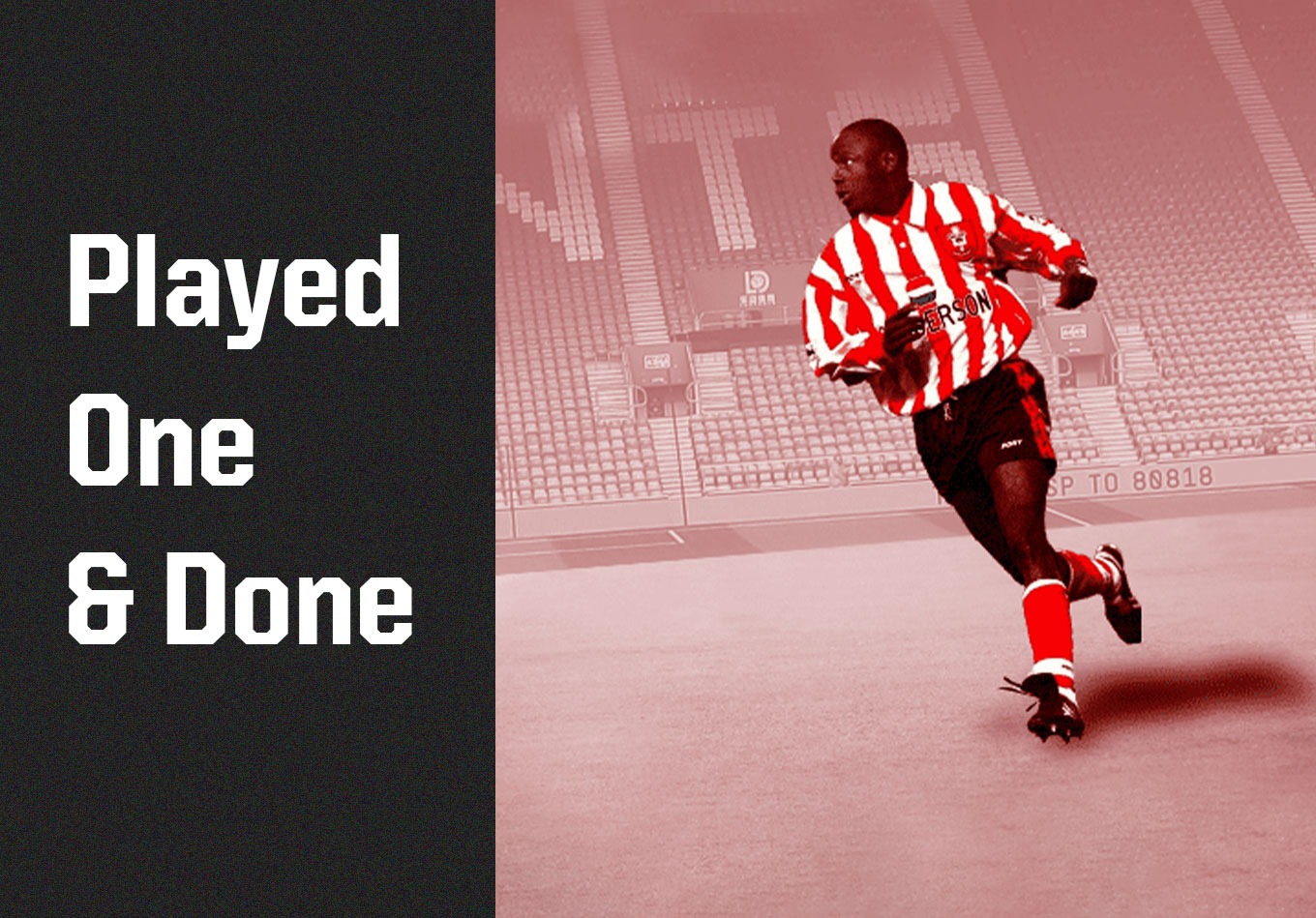 Played One… And Done: The Premier League’s One-Hit Wonders

On this date 25 years ago, Ali Dia made the most memorable cameo in Premier League history, coming on for an injured Matthew Le Tissier in Southampton’s game against Leeds. Dia had signed for the club on a 30-day contract after convincing manager Graeme Souness that he had the elite pedigree that came from being George Weah’s cousin.

But Dia wasn’t George Weah’s cousin and instead remains perhaps the least qualified player to run on to a Premier League pitch, lasting 53 minutes before being subbed off, never to be seen again. But while Dia rightly gets much of the attention in the achingly niche world of players to appear just once in the Premier League, there are 320 other players who share Dia’s single-game trajectory. Here we’ve selected a few of them who also deserve to live in the memory, whether they have a false-cousin narrative or not.

You are Steve Coppell and your Palace team are 2-0 down to Aston Villa in an early-season match in the shiny new ‘FA Premier League’. Villa look strong, title contenders maybe. You glance at your two outfield substitute options, Chris Coleman and Stuart Massey, and decide to bring both of them on after 58 minutes. A roll of the dice. Pure Coppell. The game ends as a 3-0 defeat. Coleman will go on to play 101 times in the Premier League but Massey, who had only joined the club from non-league Sutton United in the summer will never feature again. Last spotted swinging on the Adams Park crossbar celebrating Oxford United’s win at Wycombe in spring 1996.

Talking of Crystal Palace, if you ever manage to make a scoring debut in the Premier League then be concerned if it came against the Eagles. Only four players in the competition’s history have a record of one appearance and one goal, with three of them, Gary Bull, Chris David and Josh Harrop, all netting against Palace. The exception to that rule is Aidan Newhouse who scored for Wimbledon against Aston Villa on his only appearance in the Premier League. The venue? Selhurst Park. Of course it was.

Creativity was so hard to come by in the 1990s that no player assisted a goal on his debut and then failed to make at least one more appearance. You don’t discard artistry like that. The first example of a one appearance/one assist Premier League career is Derby’s Gary Twigg in 2002 and it has since been done four more times, perhaps most memorably by Manchester City’s Bersant Celina in February 2016 against Leicester. The Foxes won 3-1 at the Etihad on their way to the league title but Celina managed to assist Sergio Aguero for Manuel Pellegrini’s team. If that’s to be your only appearance in the English top-flight then it’s a reasonable story to tell. “I assisted Sergio Aguero,” “did you?” “Yes.” By the way, Lucas Piazon also has a story, but that comes later.

It seems Graeme Souness was no stranger to giving players a single opportunity by the time he picked Ali Dia in 1996. Four years earlier he had signed Hungarian Istvan Kozma from Dunfermline, yet Kozma’s league career at Liverpool amounted to just a single match against Wimbledon, coming on with seven minutes to go and failing to help the Reds turn around a 3-2 scoreline. Seven minutes of English top-flight football during which you had to face Vinnie Jones, John Fashanu and Dean Holdsworth must have been a brief but shocking introduction for a man who arrived at one of world football’s great clubs but one in a period of rapid decline.

The history of teams top of the Premier League giving a once-in-a-lifetime debut to players is limited to 14 players and it’s not surprising to learn that 10 of them have come in late April or May, in other words, once the league title had been sewn up and it was time to rest the first XI for a cup final or whatever. Finding a one-off debutant at a point in the season when things mattered is a harder task.

A recent example is Rafael Camacho playing for Liverpool in their 4-3 win against our old friends Crystal Palace in January 2019 (the last Premier League game to ever feature someone (Julian Speroni) born in the 1970s, by the way) but a better/older instance is goalkeeper Adam Rachel coming on for Aston Villa away at Blackburn on Boxing Day 1998. Villa had started the season superbly under John Gregory but things started to go wrong at Ewood Park when reserve keeper Michael Oakes, only playing because of an injury to first-choice Mark Bosnich, was sent off for deliberate handball. That meant third choice Rachel came on with 32 minutes to play, doing okay until two minutes from time when Kevin Davies assisted Tim Sherwood with his head and the future Villa manager scored past Rachel to give Rovers a 2-1 win. Welcome to the big time, kid.

Games got no bigger than those between Arsenal and Manchester United at the turn of the century. Alex Ferguson’s glittering treble holders made an early trip to Highbury in August 1999 and took a 2-1 win thanks to a rare brace from Roy Keane. The main drama came late on, though, when Martin Keown’s knee connected with United goalkeeper Raimond van der Gouw’s face, forcing the United keeper off and giving 21-year-old Nick Culkin an opportunity on one of the biggest stages in the game. United had a free-kick thanks to Keown’s loose limb but this was not the 2020s, there was not a chance an eager but nervous Culkin was going to play it short. Instead, he kicked it as hard as he could, only to hear the full-time whistle as the ball arced through the Islington sky. A short Premier League career but a winning one for a team who would go on to retain the title. How many of us can say we’ve done that?

Nick Culkin didn’t get to do very much but at least his side won a big game. Spare a thought for the four players whose teams lost by six goals in their only Premier League appearance. First up was Swindon’s Chris Hamon who came on with 13 minutes to go in the Robins’ 7-1 implosion away at Newcastle in March 1994. It was 5-1 when Hamon came on but he did, er, get to play alongside Frank McAvennie in the Scot’s final start in an English top-flight away game.

Next up is Derby 2007-08 pair Malcolm and Camara who played the first 59 and 63 minutes respectively at Anfield as Liverpool, boasting Xabi Alonso and Fernando Torres in peak form rattled the legendarily underperforming Rams side 6-0 at Anfield. It was only 3-0 when they came off, though, so you have to chalk that up as a positive.

Finally, Ishmel Demontagnac’s one game came in Blackpool’s 6-0 defeat to Arsenal in August 2010. No better way to witness Theo Walcott’s first Premier League hat-trick: watch the first two goals from the bench and then the third from the turf itself, the goal coming only seconds after you’d replaced Gary Taylor-Fletcher.

Not only is Mark Hughes the last baby boomer to score a Premier League goal but he also gave Glauber his only Premier League appearance in a moment that may, in reality, mark the point that Manchester City passed from Old City (think: David James up front) to New City (think: Sergio Aguero up front).

Glauber had appeared for Brazil in a friendly against Guatemala in 2005, so was technically an international footballer. Signed by City in late August 2008, the day before the club bought Robinho, Glauber had to wait until the final day of the season for his Premier League game, a 1-0 win against Bolton, in which he was raucously cheered by fans who may have realised the club’s banter era was fading before their very eyes. Glauber may not have featured for City again but he completed all five of his passes in the five minutes he was given and how many people can say that they have a 100% pass completion rate for Manchester City in the Premier League?

Almost nine years have passed since Brazilian Lucas Piazon’s first and so far only Premier League appearance. A late substitute for Chelsea in their 8-0 destruction of Paul Lambert’s Aston Villa, Piazon assisted Eden Hazard for Chelsea’s seventh and then, after being fouled, was given the chance to score on his debut from the penalty spot, only to see his effort saved by Brad Guzan. A promising start nonetheless. Yet despite spending a decade at Chelsea, Piazon never played another league game for them, or any other side in the English top-flight. Loan spells at Malaga, Vitesse Arnhem, Frankfurt, Reading, Fulham, Chievo and Rio Ave have taken him around the continent and from an 18-year-old prospect to nearly 27. Football is littered with Sliding Doors moments but that wasted penalty in an 8-0 win could have been infinitely more fateful than it seemed at the time.

You’ll struggle to find a better, briefer Premier League career than Jordan Slew had for Blackburn. Here are the ingredients:

– Your team is bottom of the league
– You are playing Manchester United at Old Trafford and they can go to the top of the division if they win
– It’s New Year’s Eve, which means it’s Alex Ferguson’s birthday, his 70th in fact.
– It’s the early kickoff so if you win (seems unlikely) you’ll have loads of time to get ready to go out.
– Mike Dean is the referee
– Your manager is Steve Kean and former UK foreign secretary Jack Straw has recently called for his resignation
– You come on in the last minute for Yakubu who has scored two of the goals in your team’s shock 3-2 win
– It remains Blackburn’s most recent win against United.
– Jordan Slew: icon.