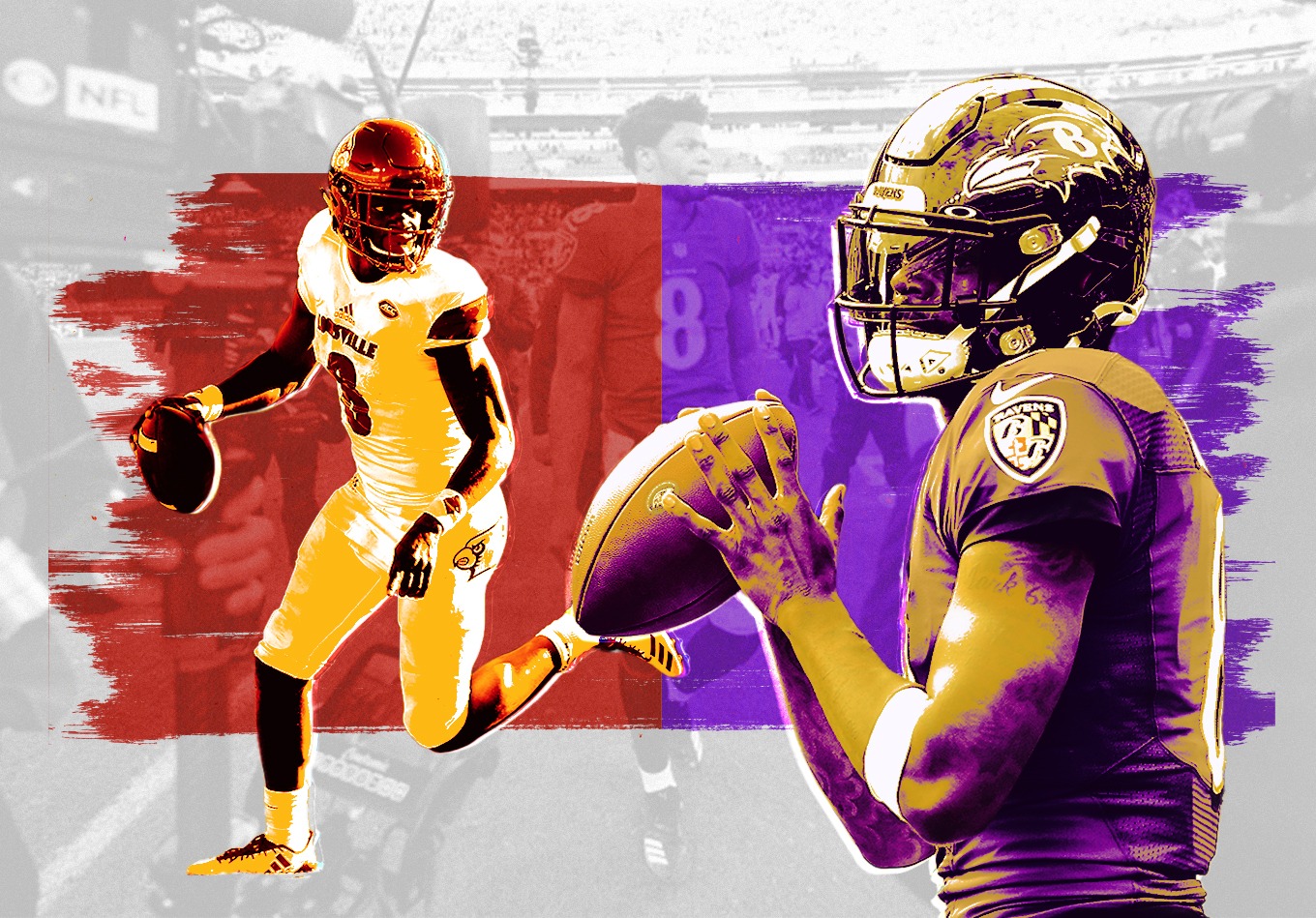 Myth Busting: Why Front Offices Should Have Foreseen the Rise of Lamar Jackson

Though some say Lamar Jackson’s development as a passer is unprecedented and exponential, there’s reason to believe his inability to pass at the college level was nothing more than a myth.

It is often heard, and lived out in the 2018 NFL Draft, that Lamar Jackson was just not a good quarterback.

An elite, one-of-a-kind athlete? Yes. But a good passer, specifically from the pocket? No.

This narrative led to former general manager and NFL analyst Bill Polian infamously making the comment that Jackson should move to wide receiver. Four quarterbacks were drafted in front of Jackson in 2018, including Josh Rosen – who is already on his fifth team in less than four years.

After winning the Heisman Trophy in 2016, Jackson returned to Louisville the next year. He put together another dynamic season as a junior, tallying 3,660 yards passing and 27 touchdowns through the air. He also added 1,601 yards and 18 scores on the ground.

His career-high 59.1 completion percentage, however, turned off many. Despite two Heisman finalist campaigns and all the fireworks Jackson provided during his time at Louisville, he fell all the way to the very bottom of the first round. Finally, general manager Eric DeCosta used the 32nd overall pick to bring Jackson to the Baltimore Ravens.

With the Ravens, Jackson has been nothing short of the dynamic athlete he was in college. Every year, we hear that the league has finally figured him out. And every year, Jackson continues to produce. And now with 1,943 passing yards through seven games in Year 4, he’s on pace to shatter the mark (3,127) he posted during his MVP season in 2019.

It’s safe to say the league has not, in fact, figured him out.

Last season, Jackson finished right around the league average (81.7%) with a well-thrown percentage of 81.5 over the middle of the field, above average (83.9) on passes under 10 yards in depth at 84.2, and slightly below average (62.2) outside the numbers at the intermediate level at 61.4.

This year, Jackson has started out on an even hotter pace than he did a year ago. He’s shown an improvement outside the numbers this year, with a well-thrown percentage of 72.5 that’s above the league average (72.2). When going deep so far, Jackson ranks 11th among all quarterbacks who have made at least 10 attempts of 30 air yards or more with a 55.6 well-thrown mark.

Those are hardly the numbers of a poor passer. In fact, Jackson’s 65.2 completion percentage since the start of the 2019 season ranks 14th among those who have played in at least 30 games over that span.

It’s easy to say in hindsight that NFL scouts overlooked Jackson’s skill set coming out of college, but should there have been more credit given to him as a passer going into the draft?

Looking back, Jackson’s ability to process the field from the pocket, move his eyes and deliver accurate throws to every level of the field was shocking based off pre-draft assumptions from nearly four years ago.

So let’s answer the question: Was he really a poor passer in college?

Polian’s comments in 2018 certainly haven’t been forgotten. Jackson had declined to run the 40-yard dash at the NFL Scouting Combine at that time in an attempt to end the wideout discussion. Now it seems difficult to believe those grumblings ever took place.

But even today, Jackson is still criticized for his inability to work within the pocket. It’s time to dispel that notion going all the way back to his time at Louisville.

A good place to start is with Jackson’s lower body mechanics. Were they top-notch by any means? No. He generally played with a narrow base, prohibiting himself to draw much power from his hips when he threw. However, given his quick-twitch ability, a shallower base allows for his feet to remain fast and for his change of direction to remain elite.

At the NFL level, the depth of his strides in his drop have improved drastically, and he plays from a much sounder base. There has been an uptick in ball velocity as a result as well as he works from the pocket. At the college level as well, Jackson had little issue standing in a clean pocket and reading out through his progressions before finding an open receiver.

There’s plenty of evidence that Jackson has the willingness and wherewithal to work from structure: move the pocket, step up in the pocket, or hang in a muddy pocket before delivering a strike. While his eyes could get stuck on his first progression at times while at Louisville, those tendencies were rooted in just being better than everyone else on the field.

The offense that Lamar ran at Louisville, however, was nothing like you see in college football today. At Oklahoma, Jalen Hurts was asked to execute very little pre- or post-snap and at North Carolina, Sam Howell runs a pedestrian glance-read offense. At Liberty, Malik Willis is generally on the move after just looking at a predetermined pre-snap read.

Jackson was given pre-snap responsibilities at Louisville, he was asked to make full-field reads, and he was not running RPO-based systems like many college quarterbacks are today.

Instead, Louisville ran a lot of pistol, 11-personnel looks in which Jackson had to hang in and execute deep crossers, dig concepts across the middle and one-on-one shots along the boundary. Of course, read-option was a big part of the plan as well to take advantage of Jackson’s once-in-a-lifetime tools.

While just glancing at the box score would show that Jackson completed just 59.1% as a junior at Louisville, the number is entirely misleading (completion percentage usually is).

Jackson’s accuracy issues were overblown, and he had a high drop rate at Louisville, which was tied for 44th out of 66 Power 5 teams in catch rating. The Cardinals were also eighth from the bottom in drops per target and tied for the seventh-most drops overall.

Was Jackson other-worldly accurate? No, but his pegged struggles coming out had to do with his accuracy both outside the numbers and deep down the field. On both of those aspects, Jackson hovered right at the average of what’s found when charting his throws.

And Josh Allen, who had much larger accuracy concerns coming out, was still taken in the top 10.

Jackson’s throws over the middle of the field were also highly indicative of his ability to anticipate and layer passes early on.

The touch displayed on Jackson’s 2017 tape is next level stuff that has clearly translated to the NFL as he’s running a Ravens offense to new heights.

Again, in hindsight, it’s easy to look back upon for a player who has won an MVP and is playing at another MVP level in 2021. However, we’re talking about a former Heisman winner who could layer throws over the middle at a high level, strike down the field at an average clip at least, and a quarterback who possessed other-worldly tools.

Every other team’s loss has turned out to be a massive gain for the Ravens as a franchise quarterback and unicorn under center fell into their laps. Jackson was overlooked coming out of college, and we may never see another player like him again.