Instant Makeover: How the Bulls Became a Defensive Force Seemingly Overnight | The Analyst 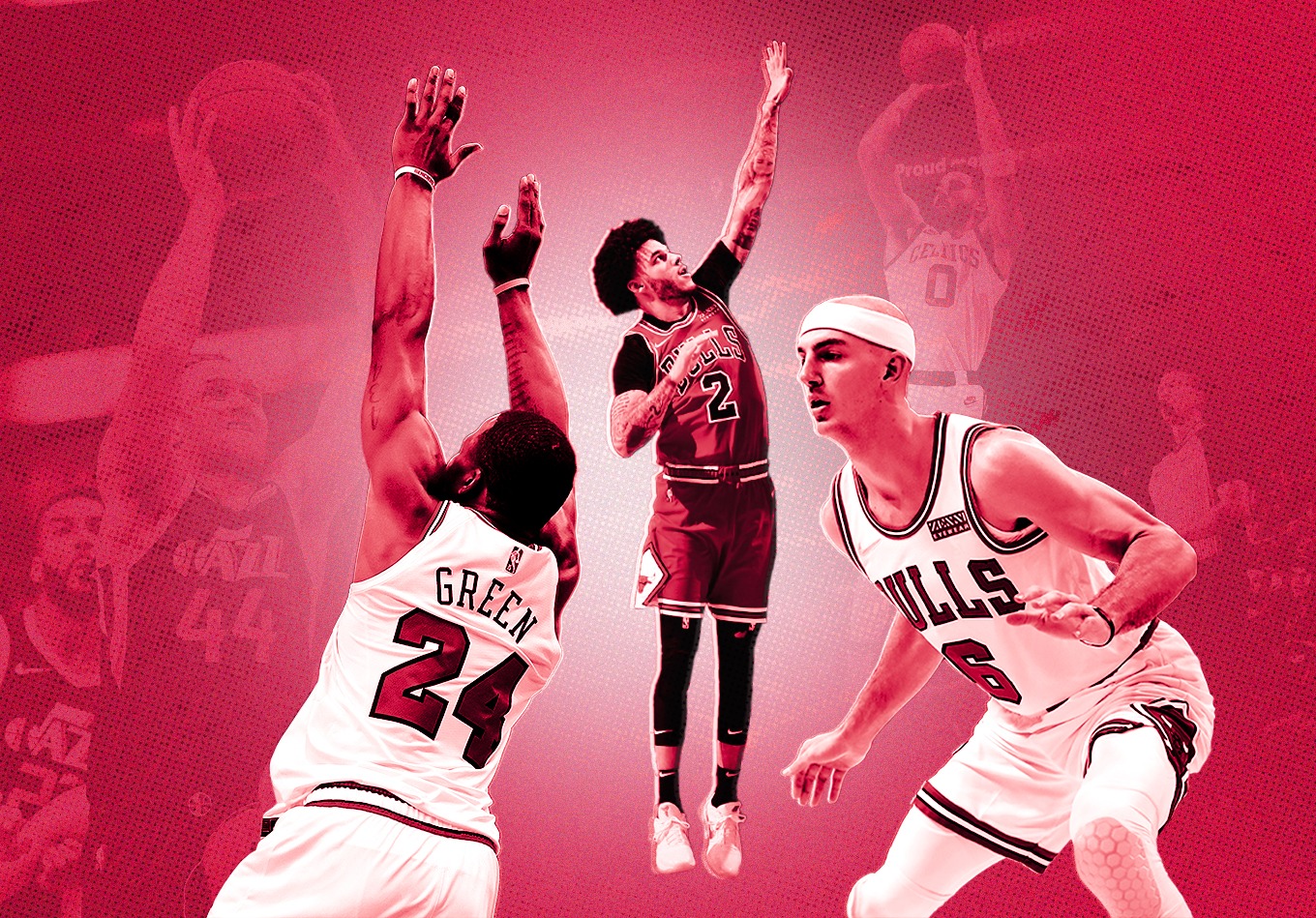 Think about some of the NBA’s elite defenses in recent years.

Envision who anchored them and amplified their greatness. The Milwaukee Bucks. The Golden State Warriors. The Los Angeles Lakers. The Toronto Raptors.

At the very least, sprawling, instinctive, menacing wing defenders are often featured in premier units. Rarely do a pair of guards spearhead a top-five defense like the Chicago Bulls tout this season. Rarely is a 6-foot-4 guard piloting the charge like Alex Caruso.

That is the charm of these Bulls, though. In a league flush with all-time interior defenders and stars such as Antetokounmpo, Davis, Rudy Gobert and Joel Embiid, Chicago’s defensive signature is stamped on the perimeter by a guard who’s the NBA’s 154th-highest paid player.

Through 14 games, a 10-win Chicago squad expected to rely on offensive gusto to actualize a playoff vision finds itself sixth in defense, 11th in offense and second in the Eastern Conference. Few, if any, anticipated such a development for a team that has a payroll dominated by Zach LaVine, Nikola Vucevic and DeMar DeRozan, and lacks size in the frontcourt.

Yet Vucevic’s responsibilities are narrowed in this context, DeRozan is playing perhaps the best defense of his career and LaVine, while still inconsistent in many respects, continues to refute the turnstile label incorrectly attached to his name.

Nonetheless, all of them remain cogs in this swarming machine that turns the 94×50 hardwood into a game of “you’ll go where we say you go” for the offense.

The two offseason additions in the backcourt, Lonzo Ball and Caruso, are playing like All-Defensive team honorees. Caruso ranks 21st (plus-1.3) in the NBA in defensive DRIP (D-DRIP), which projects a player’s contribution to a team’s plus/minus per 100 possessions on defense, while Ball is second on the Bulls in D-DRIP (plus-1.0).

Caruso doesn’t usually start games, but he certainly closes them and together, they’ve formed the NBA’s best defensive guard tandem this season.

On and off the ball, Caruso is just an outrageously awesome defender. He skinnies over screens, touts the strength and lateral quickness to slide up or down positional assignments and owns a permanent home in the passing lanes. His 4.3% steal rate leads the league and he’s second in total deflections (59).

The Bulls are playing a handsy, ultra-aggressive scheme where they’re sending feisty rotations to force turnovers (fifth in turnover rate) or dissuade simple passes. They load up help at the nail (middle of the free-throw line), brazenly stunt on most drives, dig down in the post and play with distinct physicality.

On the majority of possessions, they seem to at least get a hand on the ball and spark (temporary) perplexion.

Against Chicago, the pockets of space offensive players typically parlay into rhythmic success are instead inhabited by hawkish defenders who excel on stunts and prevent teams from proceeding as they prefer. Because the Bulls are confident their guys can recover, they’re constantly taking risks on the perimeter. It suits their personnel aptly. Nobody encapsulates this style and skill-set better than Caruso.

Despite already being a very good defender, Ball looks improved from last season. Once in that sub-All-Defensive team tier, he’s squarely in the discussion through four weeks of hoops. His screen navigation is significantly more efficient and he’s handling physicality much better – two weak points of his in 2021-22.

Similar to Caruso, he’s empowered to roam off the ball in the name of chaos, flanked by rangy reinforcements. He shares residency with Caruso at the nail. Against the New York Knicks, he frustrated Julius Randle into a handful of arduous possessions, relying on strength and exceptionally swift hands.

The off-ball wizardry was always there, but he’s now paired it with on-ball strides in a situation that augments his playmaking prowess, which was not the case in New Orleans. The results are wonderful. Ball is the main character of the clips below, but on many of them, look at how many guys have a foot (or two) in the paint.

Chicago is daring teams to thread snappy, decisive passes through swarms of limbs and mobile defenders.

Aside from a select number of teams rostering stoppers who can regularly wall off paint touches, most schemes, especially high-level ones, view their perimeter options through a “do-what-you-can” service and bank on rim protection to lead the way.

Chicago has inverted that concept, so the former is the crux and not the latter. Vucevic is the “do-what-you-can” man and the perimeter options, on and off the ball, lead the way. And what Vucevic can do is shining through the early portion of 2021-22.

Caruso and Ball’s economical screen navigation mask many of the deficiencies Vucevic (plus-0.4 D-DRIP) offers as an interior anchor. He’s not one of the NBA’s foremost mobile centers and his vertical pop leaves him susceptible to aerial threats soaring for slams.

But with those two premier defenders fighting over the top of screens and preventing Vucevic from having to play one-on-two scenarios, his positioning and active hands – two boons of his defense – become the bedrock of his ball-screen coverage rather than shortcomings serving as the primary influences.

When the space is cramped, which it often is with Caruso and Ball in the fold, Vucevic is able to deter pocket passes via astute positioning and devious hands. The Bulls also zealously crash help from the weak-side wing and corner to further complicate deliveries to the roller.

Among the slippery screen navigation, timely back-side rotations and Vucevic’s specific aptitude, this team is bottling up pick-and-roll pursuits.

Ball-screen defense is simply one manner in which Chicago demonstrates its team-wide cohesion. Its rotations are some of the best in the league and consecutive road wins over the Los Angeles squads this week demonstrated that.

The Lakers found little success posting up Davis on Tuesday because of how well the Bulls executed help responsibilities and closed out to shooters once the ball left the block in response to double-teams. Davis was a bit delayed in his processing of passing reads and while some of that is inherent in his game, the ideal reads were challenging to discern because of how well the defense positioned itself off the ball.

Controlled chaos is integral to this philosophy. Whether from ball movement, standard actions or star creation, opponents are influenced away from optimal shots they desire a given possession to produce. Chicago flies around the floor, flooding help, pinging from assignment to assignment and expecting everyone to fall in line.

It often seems as though the defense is setting the tone and the offense is responding – a rare yet valuable development in basketball.

One guy brings the double or rotates on a drive and it sets off an orderly chain of events that necessitates precise playmaking to disrupt, a trait most offenses have yet to wield consistently against this defense. Help the helper is a common basketball trope and one the Bulls actualize in their approach.

Ball and Caruso may be the tastemakers defensively, but they’re not the lone players thriving. Javonte Green has been marvelous, ranking third on the team in D-DRIP (plus-0.6). He inflicts damage with physicality and energy on and off the ball.

Since entering the rotation two weeks ago, Derrick Jones Jr. has been a pogo-stick of playmaking (17 combined steals and blocks in 168 minutes). Ayo Dosunmu’s positioning and on-ball chops have earned him substantial minutes as a rookie. DeMar DeRozan’s off-ball recognition is an all-time high. Up and down the lineup, dudes are exuding the mantra required for this roster to yield a top-five defense.

The Bulls are really good. And with a team D-DRIP that ranks 10th in the league with an expected defensive rating of 107.3, their defensive exploits feel sustainable, though elite passing teams and those with significant scoring talent in the frontcourt can pose problems. Head coach Billy Donovan tailors his scheme to fit the personnel and this personnel is saturated with good perimeter defenders.

Offensively, they might be starting to figure out the proper allocation of ball-handling duties. Six of their wins have come against teams sporting a .500 record or better.

Labeling Chicago a defense-first team long term is probably jumping the gun a bit, but this is not a fluke. The defense will factor prominently into its prosperity through an atypical lens that’s a delight to watch unfold each night.