The Rise of the Premierchamp | The Analyst 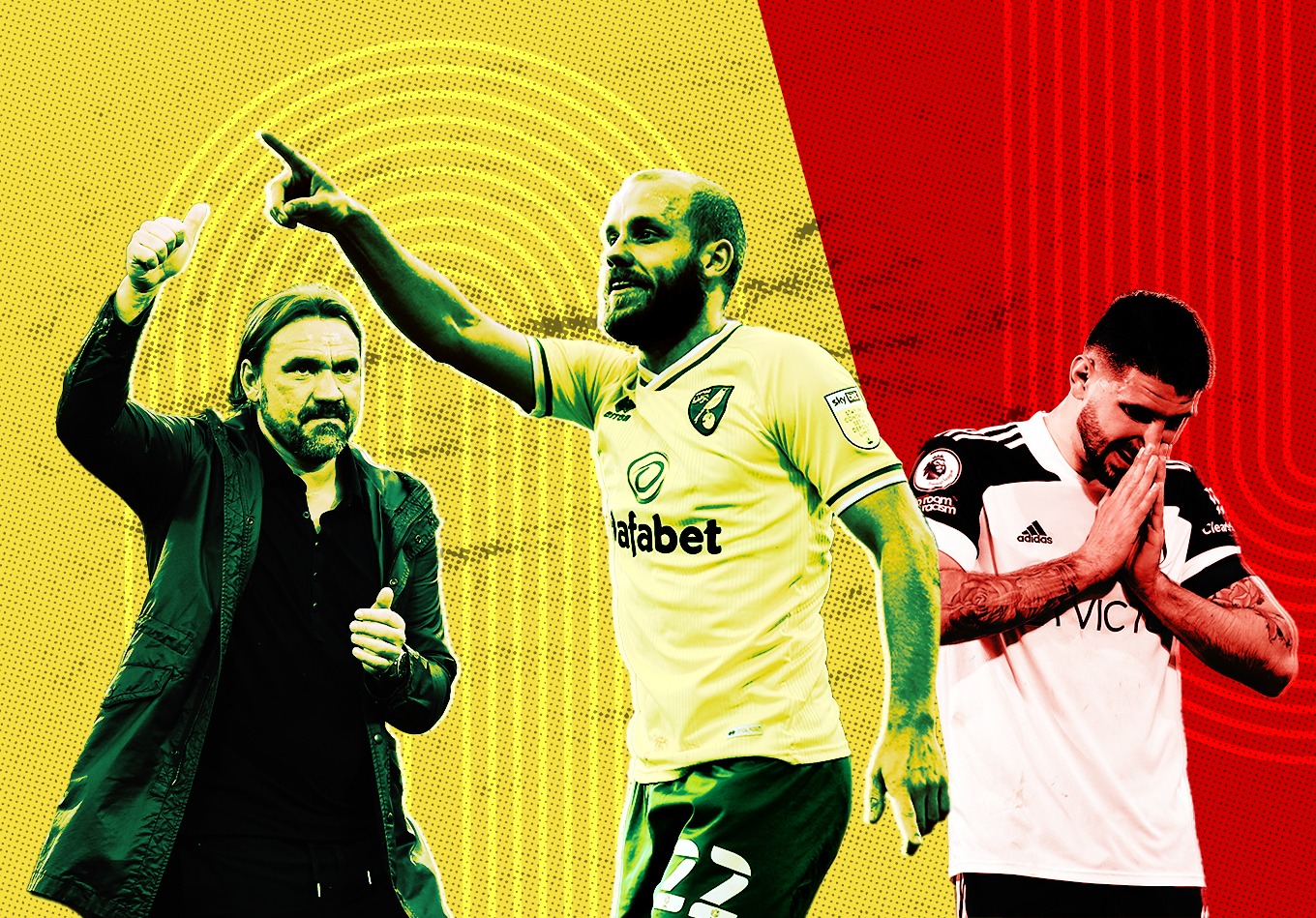 The Rise of the Premierchamp

A four-and-a-half-year managerial tenure is enough to constitute an era – but Daniel Farke’s sacking didn’t mark the end of one for Norwich. Not really.

It would be more accurate to call the genial German’s departure the end of a period – a period within the Canaries’ yo-yo era, an uncomfortable existence to which they’ve seemed condemned for the past six or seven years (depending on whether you start with 2015’s upward ‘yo’ or the downward one a year later).

Narrative merchants did a roaring trade off an axing which followed a win – 2-1 at Brentford in the last round of fixtures before the international break – but boards don’t deal in narrative, and a run of 20 Premier League matches without victory (the last 10 of 2019-20 and first 10 of this season, including last month’s 7-0 humiliation away to Chelsea) had likely already confirmed Farke’s fate.

Twice since 2014-15 Norwich have been promoted to the top flight; twice they’ve gone straight back down to the Championship, with 2019-20 the nadir as they finished rock-bottom on 21 points at an average of 0.55 per game – their lowest ever.

Norwich are not alone in their yo-yoing. Fulham began an up-down-up-down sequence in 2018 – but they have become the most prominent symbol of the widening quality gap between English football’s top two tiers in recent years – every bit the Canaries in the coal mine.

On only three occasions since the Premier League’s inception in 1992 has every newly-promoted team avoided relegation. It last happened in 2017-18 – when Newcastle, Brighton and Huddersfield all secured their safety before the final day of the season. QPR, Swansea and *checks notes* *checks them again* Norwich all survived in 2011-12 – the latter two actually came 11th and 12th respectively – while in 2001-02, Fulham, Blackburn and Bolton would all begin top-flight stays of a decade or longer.

Huddersfield’s against-all-odds survival would prove especially anomalous, though. The following season, the Terriers suffered a severe case of second-season syndrome (more on that in a bit), collecting 16 points – the third-lowest total in Premier League history, behind 2005-06 Sunderland (15 points) and the legendary one-win wonders, 2007-08 Derby (11).

Of the 86 sides ever promoted to the Premier League, 29 have been relegated in their first season (33.7%). Look at the last 10 years in isolation and that proportion goes up to 40%. And in the last five years alone, seven of the 15 newcomers (46.6%) have found themselves heading straight back to the Championship.

2020-21 marked a new statistical low in the Premier League era. West Brom and Fulham became the 28th and 29th teams to last only one season following promotion, with Sheffield United completing the bottom three. They finished on 26, 28 and 23 points respectively. Only once previously had even two sides failed to reach the 30-point mark (1994-95, when Leicester and Ipswich were both poor enough to fall short in a 42-game season).

Between 2001-02 and 2020-21, there have only been six cases of a newly-promoted side not managing at least 30 points – but five of them have been in the last five seasons, four in the last three. Since 2016-17, the lowest-placed newcomer has averaged 27.6 points, a fairly sharp drop from 31.8 across the previous five campaigns – although the average had been creeping up in the preceding years, indicating a certain cyclicality to things.

Nevertheless, it would appear that that first hurdle of an initial top-flight campaign is becoming harder and harder to clear. Could 2021-22 even be the season that we finally see a recurrence of what happened in 1997-98? Barnsley, Bolton and Crystal Palace went down as, for the only time, the Premier League’s relegation spots were made up entirely by the new boys.

Whoever the next Norwich boss is will have a tough job on their hands to keep them up, while Brentford have imploded of late – the Bees have been stung by four defeats on the bounce, having lost only one of their opening seven fixtures – and Claudio Ranieri still has much to improve at Watford. If Eddie Howe gets Newcastle firing – perhaps with the help of some transformative January signings – and Steven Gerrard does likewise at Aston Villa, it’s difficult to look far beyond Norwich, Brentford and Watford for the drop. There simply aren’t that many bad teams in the division.

Make it over the first hurdle, though, and you’re generally up and running. Second-season syndrome is not an uncommon affliction, but it’s rarely fatal; there have only been 10 instances of it leading to relegation (five of those involving a Yorkshire club though, so Leeds beware…).

Of course, Leicester went and made a mockery of the very concept of second-season syndrome by winning the title at 5,000-1 odds in 2015-16 – but that’s never going to happen again, is it?

What’s particularly striking about Norwich’s struggle to make it stick in the Premier League is the ease with which they’ve come up in the first place. Last season – as they claimed their second Championship title in as many attempts, both with Farke at the helm – they finished 10 points clear of Brentford in third and six ahead of second-placed Watford. In 2018-19, those gaps stood respectively at 11 points from Leeds and five from Sheffield United.

But this is where we see the impact of football’s principle governing force: money. It is surely no coincidence that of the last 30 teams to finish between first and sixth in the Championship (i.e. at least making the play-offs), nearly half (14) have been receiving parachute payments at the time. In fact, that has applied to eight of the last 12 sides to occupy those positions. Last season, it was the case for both of the top two (Norwich and Watford) – as it was for runners-up West Brom and play-off winners Fulham in 2019-20.

So, while the likes of Norwich, West Brom and Fulham may find themselves up against it financially in the top flight, they have been able to dominate the second tier. Parachute payments? Try projectile payments – such is the way they damage competition at that level.

Sure, Coventry are flying in fourth only two seasons after promotion from League One, but the chances of them breaking into the top two are slim to none. It’s been nine years since Southampton became the last team to go from the third tier to the Premier League with back-to-back promotions (a year after Norwich had done the same); it’s almost impossible to see that happening again with English football’s financial structure as it is.

Look at the Championship table right now: the top three are all receiving parachute payments. Bournemouth have taken 40 points from 17 games and Fulham 38, putting them eight and six points clear of third-placed West Brom respectively. The flip-side of that is that Sheffield United – relegated from the Premier League with West Brom and Fulham last season – are languishing down in 18th, although it was only in March that they went through the considerable upheaval of seeing immensely influential manager Chris Wilder leave the club, so the benefit of the parachute payments was likely to be offset somewhat as they began a new era under Slaviša Jokanović.

If meticulously well-run Brentford wind up back in the Championship in 2022-23, they ought to find themselves in pole position for a swift Premier League return. Some might call parachute payments rewarding failure – but can immediate relegation really be classed as failure when the bar for success is set so high?

We hear about players ‘falling down the gap between the Premier League and the Championship’. For so long the poster boy was Dwight Gayle, who’s now been succeeded by Aleksandar Mitrovic and Teemu Pukki (the Balkan and Baltic Gayle, if you like) – but what about clubs?

It does feel like there’s this sort of mini, quasi-league forming, enveloping the bottom of one division and the top of the other. The Leagueship? Hmm, that sounds a bit too ‘ITV2 period drama’. The Premierchamp? Let’s go with that.