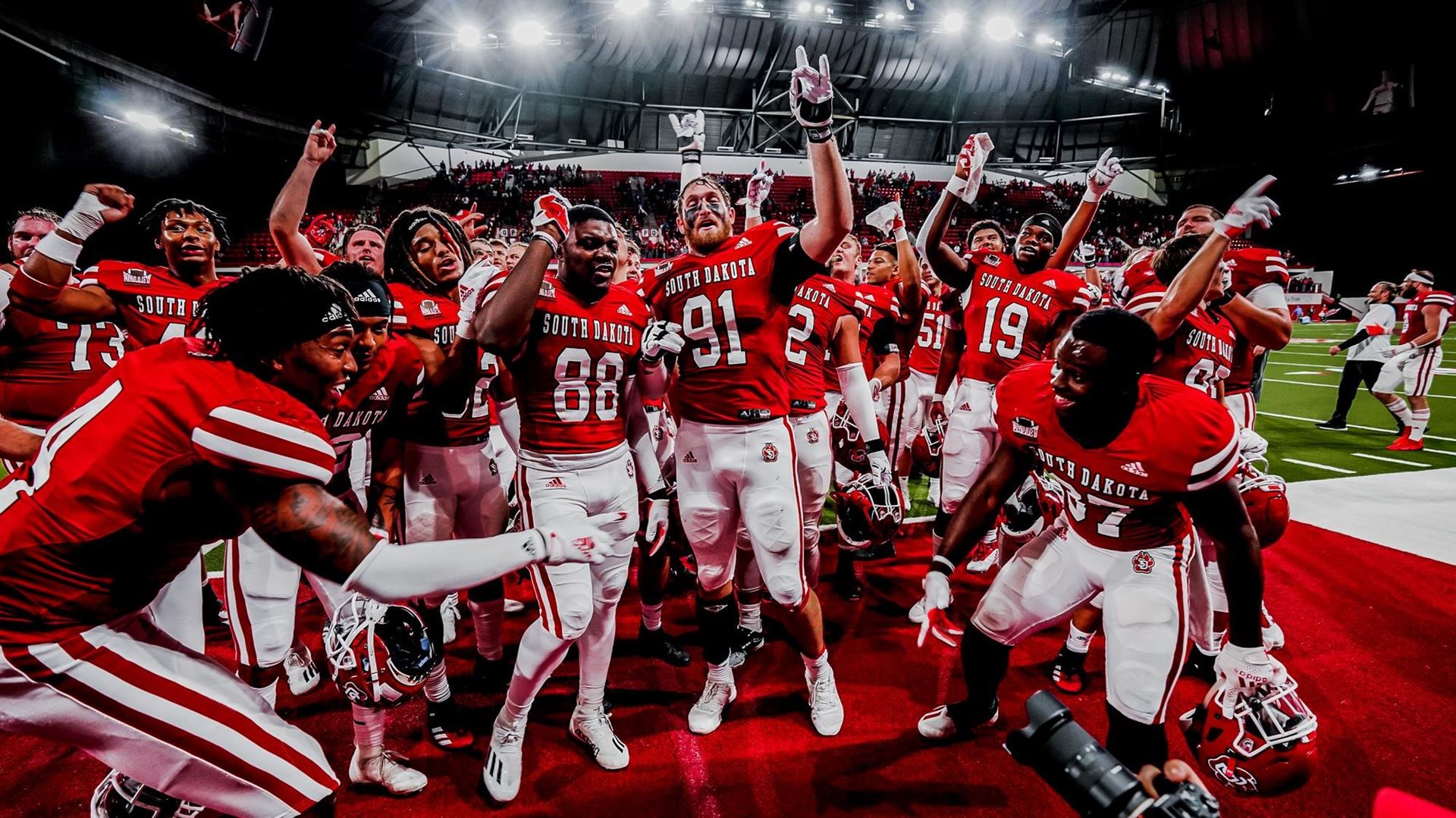 On the day the University of Montana learned it won’t be getting a visit by ESPN’s iconic “College GameDay” next weekend, FCS college football put on a showcase from coast-to-coast.

Conference titles and postseason bids started rolling in Saturday, with many more to come in the final full week of regular-season action.

Here are 10 takeaways from the terrific schedule of games in Week 11:

The wildest finish of the FCS season occurred in No. 19 South Dakota’s 23-20 victory over No. 4 South Dakota State in the Missouri Valley Football Conference. The visiting Jackrabbits were ahead 20-17 when they mistakenly left one second on the clock on Chris Oladokun’s intentional incomplete pass along a sideline toward the South Dakota end zone. That meant the Coyotes had one more offensive play from their 43. Quarterback Carson Camp scrambled out of pressure and lofted a Hail Mary attempt a few yards shy of the Jackrabbits’ end zone, but two defenders tipped the ball toward awaiting USD wide receiver Jeremiah Webb, who caught it at the 1, spun and dove in for his first career touchdown. With three top 25 wins, the Coyotes (7-3, 5-2 MVFC) have likely clinched their third all-time FCS playoff bid, but they also get to play for a share of the conference title next Saturday at North Dakota State (9-1, 6-1), which will be the outright champ with a win.

Big Sky still has a showcase

Montana’s social media campaign to land “GameDay” for the first time fell short to, um, Ohio State gaining its 50th all-time appearance on the show. It doesn’t get any better than the Grizzlies’ rivalry game against Montana State, but big games are a staple in a Big Sky Conference that appears to be headed toward receiving five playoff bids for the first time. Montana State (9-1, 7-0) and Sacramento State (8-2, 7-0) remained atop the standings with wins, but the biggest matchup saw No. 7 Eastern Washington improve to 10-0 all-time against UC Davis with a 38-20 victory over the No. 6 Aggies. Before fog rolled in across the field during the second half, Eagles quarterback Eric Barriere was in command, finishing with 411 passing yards and three touchdowns. He’s been over 400 yards 10 times in his career.

De facto championship games were set up in the Big South and Southern conferences next Saturday. Monmouth matched the Big South record with a 16th straight conference win, 44-7 over Robert Morris, and will visit No. 10 Kennesaw State to break their 6-0 deadlock atop the standings. In the SoCon, No. 11 ETSU will host Mercer for the title and automatic playoff bid. In ETSU’s 56-35 triumph at Western Carolina, Jacob Saylors surpassed Quay Holmes’ school record with 266 rushing yards and combined with Holmes (212) for the first set of FCS teammates to reach 200 in the same game since Northern Iowa’s Tyvis Smith (207) and Aaron Bailey (200) in a 2015 playoff win at Portland State.

Call them Mr. Everything

On a day in which three teams clinched automatic qualifying bids to the playoffs, it was appropriate defending national champion Sam Houston was the first with a 42-28 victory over Eastern Kentucky in the AQ7. Eric Schmid accounted for four touchdowns and passed for a season-high 392 yards, getting big games from playmaking wide receivers Ife Adeyi (seven receptions, 138 yards, one TD) and Jequez Ezzard (9-111-1). Also in the top-ranked Bearkats’ 20th straight win since 2019, cornerback Zyon McCollum snared his 13th career interception, one shy of the school record.

It makes sense how the NCAA kicking king is a Duke. James Madison’s Ethan Ratke kicked a program-record six field goals in the No. 2 Dukes’ 32-22 win at No. 25 William & Mary in the CAA. In doing so, he set NCAA all-division career records for field goals (100) and points by a kicker (517). He’s 28 of 30 field goal this season, one make shy of the FCS single-season record that’s held by North Dakota State’s Adam Keller with 29 in 34 attempts in 2014.

Lightning delayed the matchup of Patriot League unbeatens for an hour midway through the second quarter, but it seemingly struck more with the Holy Cross offense in a 52-24 win over Fordham that clinched at least a share of a third straight title as well as the Crusaders’ third straight bid to the playoffs under coach Bob Chesney. Fordham kicked a field goal shortly after the delay to go ahead 24-17, but the Crusaders (8-2, 5-0) scored the final 35 points. Quarterback Matthew Sluka accounted for 376 yards of total offense and four touchdowns, Jordan Fuller rushed for three touchdowns and the defense kept Fordham’s ninth-ranked offense in the FCS to 314 yards, 146 below its season average. The Crusaders have won 17 of their last 18 games against Patriot opponents since 2018.

UT Martin runs away with big haul in OVC

How rewarding was UT Martin’s 42-3 win over Tennessee Tech? The No. 13 Skyhawks set the school record with their ninth victory in a row, raised two trophies – the Ohio Valley and the Sgt. York contested between the four Tennessee schools in the conference – and earned their second all-time bid to the playoffs. The first time was in coach Jason Simpson’s first season in 2006, and he’s now one win shy of 100 with the Skyhawks. They averaged 10.6 yards per carry in their rout, led by Peyton Logan (seven carries, 116 yards, one TD) and Zak Wallace (8-90-2).

South Carolina State will represent the MEAC for the first time in the Celebration Bowl on Dec. 18 in Atlanta. The Bulldogs (5-5, 4-0) lost to North Carolina A&T 27-17 in a nonconference game, but Norfolk State’s second-half meltdown against Delaware State (a 26-0 lead became a 28-26 loss) allowed coach Buddy Pough’s team to clinch its first MEAC title since 2014, and for a record 18th time. The Bulldogs may wind up facing coach Deion Sanders’ Jackson State squad, which has won the SWAC East Division title and will play for a Celebration Bowl bid in the conference championship game on Dec. 4.

Make it 12 FCS wins over the FBS

Maine’s 35-10 roll past UMass made it 12 wins by FCS teams against FBS opponents this season, which has been topped only once in the last 20 years (16 in 2013). Quarterback Joe Fagnano returned from a seven-game absence due to injury to throw two touchdowns and Elijah Barnwell rushed for a pair of scores in the Black Bears’ fourth all-time FBS win. Linebacker Ray Miller racked up 16 tackles – the Campbell grad transfer’s fifth game in double figures.