Real Sociedad: Closing on the Elite with Homegrown Approach | The Analyst 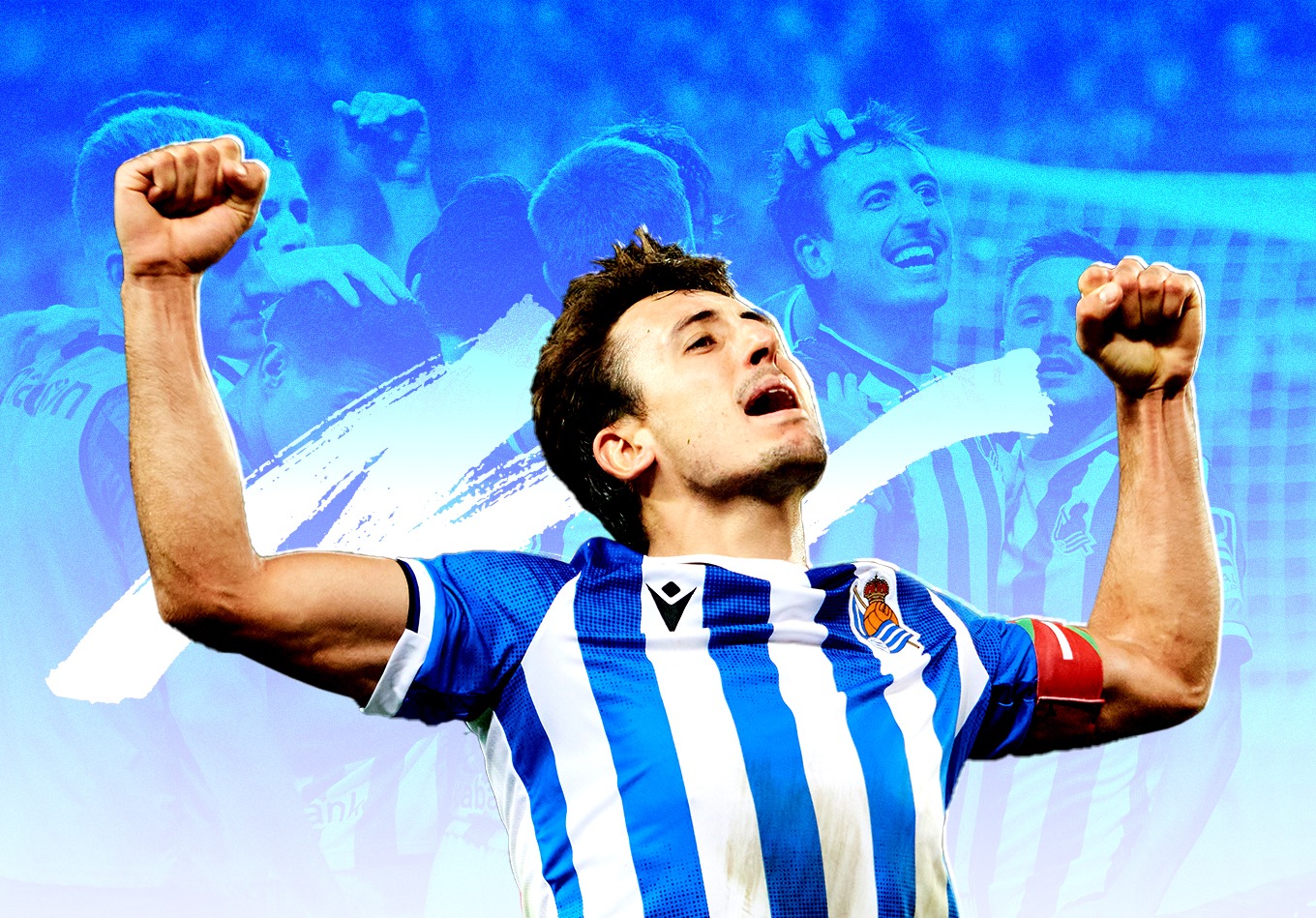 The presence of Real Madrid and Atlético Madrid at the top of the La Liga table is to be expected, but Real Sociedad joining them is less so. After a fifth-place finish in 2020-21, can they really challenge for the title this time around?

“I’m very aware of why I’m here,” Imanol Alguacil said. “Firstly, for the way I work, and secondly, for the work I’ve done with the players in the B team over these last three years.”

It’s December 26th, 2018 – the day on which Imanol Alguacil became Real Sociedad’s manager for good. He had been there before, although only temporarily, filling in for the sacked Eusebio Sacristán at the end of the 2017-18 campaign. Back then he filled his duty out of loyalty to his beloved club, albeit with a reluctance to frame himself as any sort of long-term solution.

Six months later, when Asier Garitano came and went after 17 league games, the then B team manager was thrust back into the spotlight and presented with the opportunity of a lifetime. After a run of managers brought in from the outside that hadn’t worked, Real Sociedad’s vision was clear: to empower what the club already had within it, by the hand of a man who knew it as well as anyone.

It’s now been almost three years since Imanol Alguacil accepted his dream job. In his two full seasons in charge, Real Sociedad have finished in the top six in both campaigns, featured in European competition in both and also lifted the Copa del Rey – their first major trophy since 1987.

Here’s the story of how they orchestrated their rise.

During Alguacil’s time in charge, Real Sociedad have gradually phased in and developed players from the youth setup to the point where many are now front and centre of their success. For example, of the 14 players who featured in their Copa del Rey final victory in April 2021, eight of them had come through the ranks at Zubieta – the club’s academy centre. Among those were a number of players that Alguacil had referred to in his unveiling in 2018: “There are a lot of players that have been with me at Sanse (the B team) and that has given me more confidence to take this step, because I think I can be useful for them.”

Another marker of the health of Real Sociedad’s youth movement has been the arrival of Real Sociedad B to Spain’s second tier this season, following their promotion from Segunda B. This has generated a unique dynamic in that, not only are they currently the only Spanish side with representation in the country’s top two divisions, but they filter players up and down between the teams with total freedom to suit their needs. The B team – managed by Xabi Alonso – employ similar principles of play as that of the first team, which allows for frequent movement between the squads.

“Our aim is nothing but to compete with our boys at the top level,” sporting director Roberto Olabe told El Pais in March. “The vocation of the club is very deep-rooted and it’s simply to promote the development of the footballers.”

Real Sociedad’s identity of youth isn’t merely for show, however. It has had a tangible effect on the club’s success under Alguacil, owing to how it both fits and feeds the particular style of play that now runs throughout the club. With what was the youngest starting XI in terms of average age in both 2019-20 and 2020-21 – as well as so far this season – La Real’s youthful core emboldens their style of aggressive pressure without the ball, while they show a bravery in possession that an education at Zubieta has prepared many of them for. Alguacil knows exactly what he can demand from those that make the jump.

Of ever-present La Liga sides since the start of last season Real Sociedad have the highest average sequence start distance in the Spanish top-flight (43.5 metres). This highlights how high, on average, La Real regain possession of the ball to begin a sequence of play. They also rank in the top three teams in this period for both PPDA (opposition passes allowed per defensive action) and high turnovers, which are defined as open play sequences that begin within 40 metres of the opponent’s goal.

Their commitment to this style was credited by David Silva – who is the only player aged 30 or over to have played for Real Sociedad this season – as one of the attractions for his surprise signing there in 2020. “(Alguacil) is a brave coach – he always aims for his teams to have the ball, to apply pressure high up and to recover it as soon as possible, and these were some of the reasons for why I decided to come here,” he told Diario AS last month.

Silva himself is a key example of how Real Sociedad infuse their academy base with selective opportunities from outside. The 35-year-old is coming to the end of his competitive peak, but in him they sought a perfect stylistic fit and a presence that could lead by example for a coming generation of midfield players at the club. Of course, the Canarian midfielder is a master of the ball too and this also had the effect of strengthening the model of play that they’re constantly building on.

To truly trouble the established elite of Spanish football, Real Sociedad are working to become masters of the ball themselves. Or as Roberto Olabe would say, space. “We talk about passes as a tool but the source of energy for a pass is space, which we can’t forget.”

Real Sociedad’s average possession in La Liga since the start of last season has been 55.2%; the fifth-most of any team, though only marginally behind Villarreal on 55.5%. They’re also one of only four teams in this period who have averaged 50% or more possession when in leading positions, along with Barcelona, Sevilla and Real Madrid. Alguacil’s hunt for more control is an on-going process that they haven’t always been able to master as yet, but it’s providing them with a consistent platform to collect points in the meantime. Besides, when you have Mikel Oyarzabal and Alexander Isak in the same team, troubling the scoreboard doesn’t require total domination of territory.

The Spaniard and the Swede have become one of La Liga’s best double acts over the last few seasons, with the former combining scoring instincts with final third creativity and Isak being a dynamic centre forward. Indeed, since the start of last season both players figure among the top 10 players in La Liga for combined expected goals and assists per 90, even when excluding penalties (Oyarzabal has scored eight from the spot in this period).

The pair are also another example of how Real Sociedad have successfully operated as a club in recent seasons. Oyarzabal is a player born out of Zubieta and someone who Alguacil coached in the B team, yet he’s now the club captain, the main symbol of the club and one of the most talented attacking players in the league. Isak, meanwhile, was a young player short on opportunities at Borussia Dortmund who they sensed could be brought in without a high fee yet had big potential once in the club’s developmental hands. That combination of talent built within their academy and sourced externally in the right moment has come to typify the club’s rapid progression in recent times.

Oyarzabal and Isak may be the face of Real Sociedad on the attacking front, but their performance as a team when it comes to generating chances also tracks well with their aspirations. Only Barcelona, Real Madrid and reigning champions Atlético Madrid have scored more league goals than Real Sociedad since August 2020, while based on our expected goals (xG) data, they have created the third-best chances per game during this period (1.61) – only behind Real Madrid and Barcelona.

Although their mentality is to use possession to attack, their control of games relative to most other sides has also made them a consistently strong defensive unit. By being able to defend with the ball for spells of games through possession, as many of Europe’s top sides do, Real Sociedad have limited scoring opportunities for their opponents at a similarly high level to their attacking performance. Alguacil’s side rank fourth for goals conceded (0.98) and fifth for expected goals conceded (1.04) since the start of last season in La Liga. And true to their nature, their back four this season has often been comprised entirely of players who graduated from the ranks at Zubieta.

Upon the resumption of the domestic season, Real Sociedad will return level on points with Real Madrid and Atlético Madrid at the top of La Liga. Despite having to compete across a number of competitions while relying on a squad that’s rounded out heavily by academy players – which will be tested to its limits – the key variable at the top of La Liga this season will be the events at Barcelona. If their results continue to suffer in the wake of Lionel Messi’s departure, there could well be an unexpected vacancy in a top four that had been strongly established in recent history. Real Sociedad are a club in a constant state of growth and will try to be there if the situation takes a favourable turn.

Short term success won’t define Imanol Alguacil’s Real Sociedad team, however. For the way they operate, their process takes precedence over trying to crack the top four at all costs. It’s a testament to their organisation as a club overall, from establishing a model of play that permeates down from the first team, creating direct links between the youth setup and the senior squad, and supplementing their core of players – who are mostly homegrown – through smart work in the transfer market by sporting director Roberto Olabe. The total sum has led to Real Sociedad being one of – if not the most – ascendent club in La Liga in recent seasons, and owing to their foundation of youth, there’s no telling how far they will be able to run with it.