The Yays and Nays: Our Week 8 Fantasy Football Projections, Top Plays and DFS Picks | The Analyst 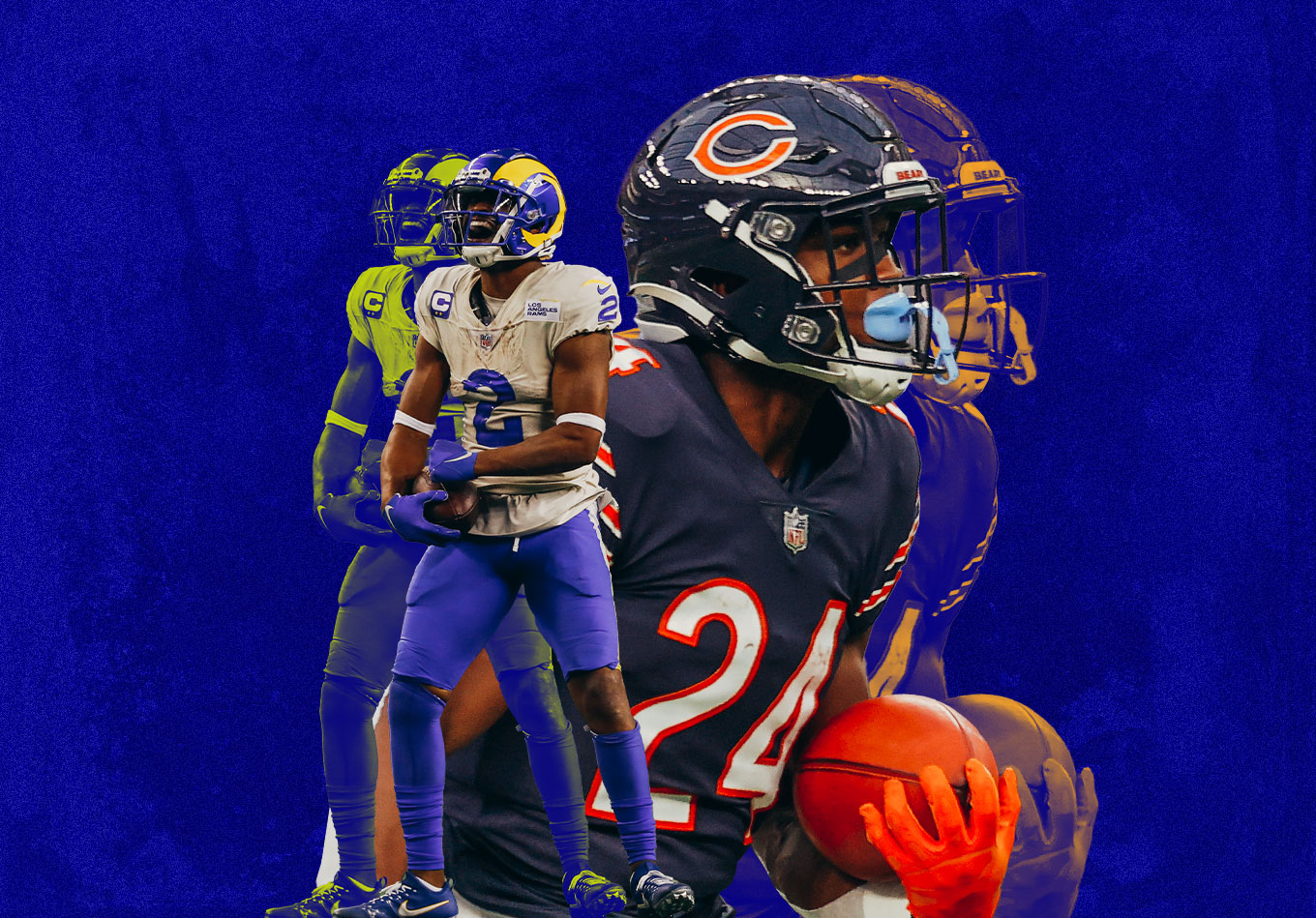 Back in Week 5, we discussed a strategy in fantasy football called “streaming.”

As a quick reminder, particularly as it relates to defenses, streaming is when you pick up and drop a defense depending on the matchup each week as opposed to just holding onto one all season.

Defenses playing rookie quarterbacks continue to prove to be worthwhile investments as Tampa Bay showed last week, forcing five turnovers against Justin Fields and the Chicago Bears on its way to finishing as the top defense of the week.

But it’s what the Buccaneers did on the other side of the ball that caught our eye.

They put up 38 points and after seven weeks, they led the NFL in total points scored (233). So, this week, let’s discuss a different fantasy football strategy called “stacking.”

Stacking is relatively self-explanatory. It’s when you roster multiple players from the same team, most commonly a quarterback and wide receiver. But it can also be aggressively utilized with the top two wide receivers from a team, a running back and a wide receiver, or any combination of players.

Understandably, it is a boom or bust strategy. Say you have Patrick Mahomes and Tyreek Hill (a common stack). Well, that can be an explosive strategy and lead to an easy win, like in Week 4 when they were the top players at their respective positions and combined for a stunning 78.72 points.

But one uncharacteristic performance – Kansas City in Week 7 perhaps – and you can also be facing an immense challenge, with only 20.44 fantasy points between Mahomes and Hill.

This year, there are lots of quality stacks. Cooper Kupp is WR1 and Robert Woods is WR19. Not only would you have the boom in Kupp’s game, but Woods has recorded double-digit fantasy points every week except Week 3. These two are averaging 41.3 points per week.

Maybe you bought stock in the Cowboys’ offense and employ a lineup each week that includes Ezekiel Elliott (RB9) and CeeDee Lamb (WR15)? What about deciding to draft Lamar Jackson’s two favorite targets? Marquise Brown (WR6) and Mark Andrews (TE2) would have made that a worthy investment.

Or maybe, you decided that the offense you wanted to grab multiple players from was Tampa Bay. If that’s the case, congratulations! You’re likely near the top of your league.

Tom Brady is QB1. Leonard Fournette is RB10. Mike Evans is WR7. Chris Godwin is WR13. Antonio Brown is WR23, but he’s averaging more points per game than both Evans and Godwin.

Stacking your team is mostly done during the draft, but opportunities do arise during the season. For example, if your quarterback is Jackson, you obviously need to pick up a different one this week. If you feel you are in a situation where you need to make a risky move to win, picking up a quarterback to pair with one of your key contributors might be the play.

So maybe it’s pairing Matt Ryan with Calvin Ridley or grabbing Kirk Cousins to pair with either Justin Jefferson or Adam Thielen. However it takes place, don’t be afraid to play multiple players from the same team, especially if you decide that you need to have a big week to snatch a win.

As always, let’s jump around and evaluate some Week 8 projections gathered from some of the top data-driven projections available using several of our AI-powered models. We’ll get into some yays and nays before highlighting a few DFS value plays.

Matt Ryan, QB (ATL) vs. CAR (ECR: 15, Our Rank: 10): The Atlanta Falcons slowly seem to be hitting their stride on offense, and it starts with Ryan. Atlanta has scored at least 27 points in each of its last three games after only averaging 16.0 points during its first three.

Ryan has thrown multiple touchdowns passes in five straight games and averaged 22.68 fantasy points in his last three. This week, he faces a Carolina Panthers defense loaded with talented players but struggling to produce many stops. The Panthers have allowed 29 points per game the last four weeks and let three of the last four quarterbacks they’ve faced to finish inside the top eight at the position.

With two top-11 performances in his last three weeks, our models indicate Ryan is likely to produce another. He’s a solid play this week.

Khalil Herbert, RB (CHI) vs. SF (ECR: 20, Our Rank: 12): Herbert did something extremely notable last week. That he ran for 100 yards wasn’t the big surprise. It’s that he did it against Tampa Bay. In a game where Chicago struggled to produce any offense and turned the ball over five times, Herbert finished the week as RB5 – the only running back in the top 10 to not score a touchdown.

Herbert has received at least 18 carries in each of the last three weeks. And luckily for Herbert, he gets a much more generous defense this week. The San Francisco 49ers have allowed at least one rushing touchdown in every game this season and at least 100 rushing yards in every game but one.

With scoring likely to be at a premium, look for Chicago to rely on Herbert. Against the Niners, we like his chances of having another strong week. He’s a top-12 play.

Kenneth Gainwell, RB (PHI) vs. DET (ECR: 22, Our Rank: 13): With Miles Sanders being placed on IR, it’s Kenny G time! Gainwell was already reaching a position where he was in consideration for a Flex spot every week, but with Sanders out, he immediately vaults into near-RB1 territory.

And boy is the Detroit Lions a good matchup to attempt to do just that. In its last four games, Detroit has allowed three different running backs to record at least 22.0 fantasy points. A large part of Detroit’s ineptitude over that time is that it has allowed opposing running backs to catch 21 passes. After Sanders was injured last week, Gainwell recorded four receptions for 41 yards and a touchdown.

Plus, Gainwell has proven he’s able to get in the end zone, something Sanders was seemingly allergic to. In three runs in goal-to-go situations, Gainwell scored twice. Sanders had no touchdowns in four such rushes. The matchup is great. Gainwell has our fourth-highest projected receiving yards from a running back. He’s a solid RB2 this week, with some RB1 potential.

Robert Woods, WR (LAR) vs. HOU (ECR: 22, Our Rank: 8): Because Cooper Kupp has been getting all of the attention, it probably slipped your mind that Woods entered the Week as WR19.

Want some good Los Angeles Rams stats and bad Houston Texans stats? The Rams lead the NFL in average yardage gained per pass play (8.45), while Houston allows the fourth most yards per passing attempt (7.53). The Rams are third in passing yards per game (301.7), second in passing touchdowns (19), and third in total scoring (207).

Houston, meanwhile, allows the third most points per game (29.0).

In fact, last week against Arizona, Houston allowed two wide receivers to finish inside the top 20. Kupp shouldn’t be the only obvious play from L.A. this week.

Over the last four weeks, Woods is averaging 17.0 fantasy points. With a great matchup, his ECR outside the top 20 is way too low. He’s inside our top 10 for the week.

Joe Burrow, QB (CIN) vs. NYJ (ECR: 9, Our Rank: 17): Burrow is coming off an impressive evisceration of the Baltimore Ravens. The New York Jets, meanwhile, just allowed the New England Patriots to light up the scoreboard with 54 points. On paper this should be screaming mismatch. And it should be in real life as well.

But, last week was the first time the Jets allowed a top-10 finish in fantasy football by a quarterback all season. It’s not even because the Jets are particularly good against the quarterback. It’s because quarterbacks don’t get nearly as many chances as normal to collect fantasy points. The Jets are one of four NFL teams who see a higher percentage of rushing plays (51.2%) than passing plays (48.8%) in the second halves of games.

With the Cincinnati Bengals defense playing at a high level, the chances of the Jets scoring a ton and creating an environment where Cincinnati needs to score to win is slim. Our projections reflect that. Burrow is a QB2 this week.

Leonard Fournette, RB (TB) vs. NO (ECR: 16, Our Rank: 27): It’s undoubtably been a strong start to the season for Fournette, snatching the starting job and turning that into heavy volume every week. But it’s been a stronger start for the Saints’ rushing defense.

In 23 carries against New Orleans last season, Fournette only mustered 68 rushing yards. We’re expecting similar troubles for him this week.

New Orleans leads the NFL by a wide margin in yards allowed per carry (3.32). Because the Saints’ defensive strength is on the ground, the Bucs are likely to attack New Orleans through the air. Tom Brady has our highest projected passing attempts this week.

Fournette likely won’t see the volume he is accustomed to on the ground. That makes him reliant on production in the passing game and the Saints have only allowed one running back all year to record five catches in a game. He is a touchdown dependent RB2 this week.

Sam Darnold was benched last week against a porous New York Giants defense. That should tell you all you need to know about the quarterback play Moore is experiencing. And yet, he’s still WR9 entering Week 8. Moore has recorded at least five receptions in every game, 10 or more targets in five games, and only has one game with fewer than 70 receiving yards.

Moore is averaging 6.6 receptions and 83.7 receiving yards per game. That base is rock solid and it’s quite close to the output our model predicts for him. That he’s doing this in spite of Darnold is impressive. Unfortunately for Moore fantasy managers, until he gets better quarterback play, he’ll have trouble reaching WR1 status without a touchdown.

In fantasy terms, McLaurin has four games with less than 10.5 fantasy points, and three contests with greater than 25.0. That has resulted in three top-five finishes, and four finishes outside the top 30. Going against a Denver Broncos team that hasn’t allowed a top 10 wide receiver finish since Week 1, McLaurin could be in for a rough week.

Ultimately, we are projecting the mean performance for each player. And McLaurin definitely has a chance of outperforming his ECR of 14. But there’s also a chance for another dud. While you’re likely starting him and hoping for another top-notch performance, he’s a risky WR play this week.

D’Andre Swift, RB (DET) vs. PHI (DK Price: 7,100): Swift was RB2 entering the week, but he’s only got the sixth-highest price among running backs. He’s a stud, and he’s better when his team is losing, which Detroit does, a lot. He’s our top RB value of the week.

Jakobi Meyers, WR (NE) vs. LAC (DK Price: 5,100): He’s going to score a touchdown eventually. Meyers is WR33 and remains the only wide receiver in the top 50 in PPR points without a touchdown. In the meantime, he’ll continue to sneeze his way into WR2 or WR3 output each week. His projected receptions (8.4) leads all players. He’s our top value play of the week.

Jamison Crowder, WR (NYJ) vs. CIN (DK Price: 4,800): The Jets stink. The Bengals do not. New York will likely be needing to throw the ball to play catch up. With at least six targets and four receptions in every game he’s played, Crowder has a strong chance of outperforming his price. 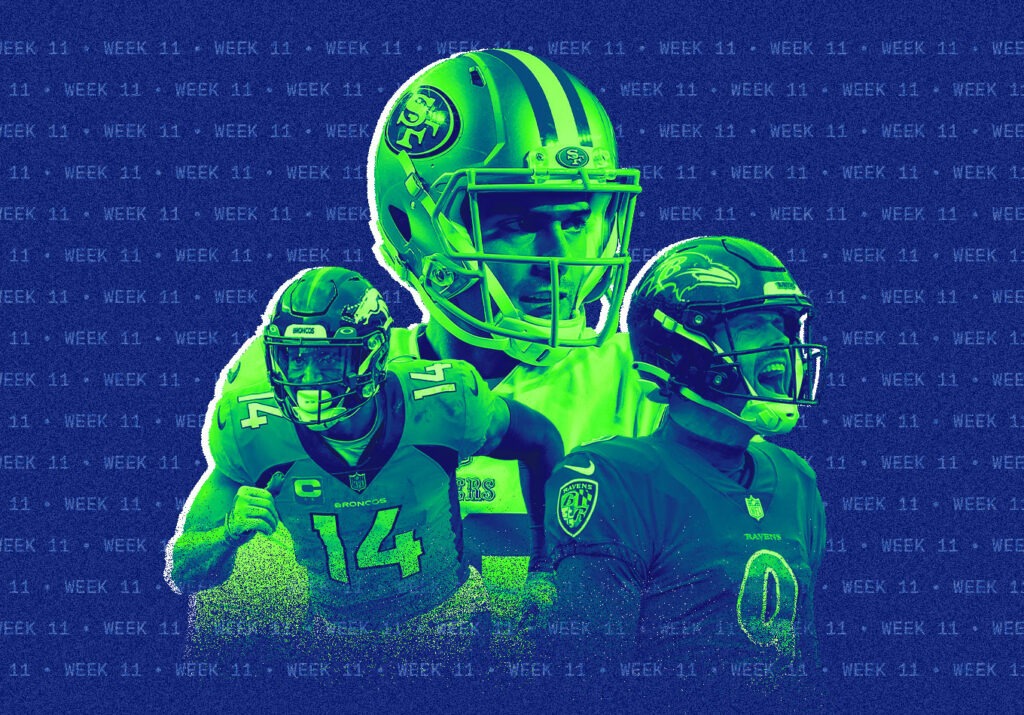 The Yays and Nays: Our Fantasy Football Rankings, Projections and Top Plays for Week 11