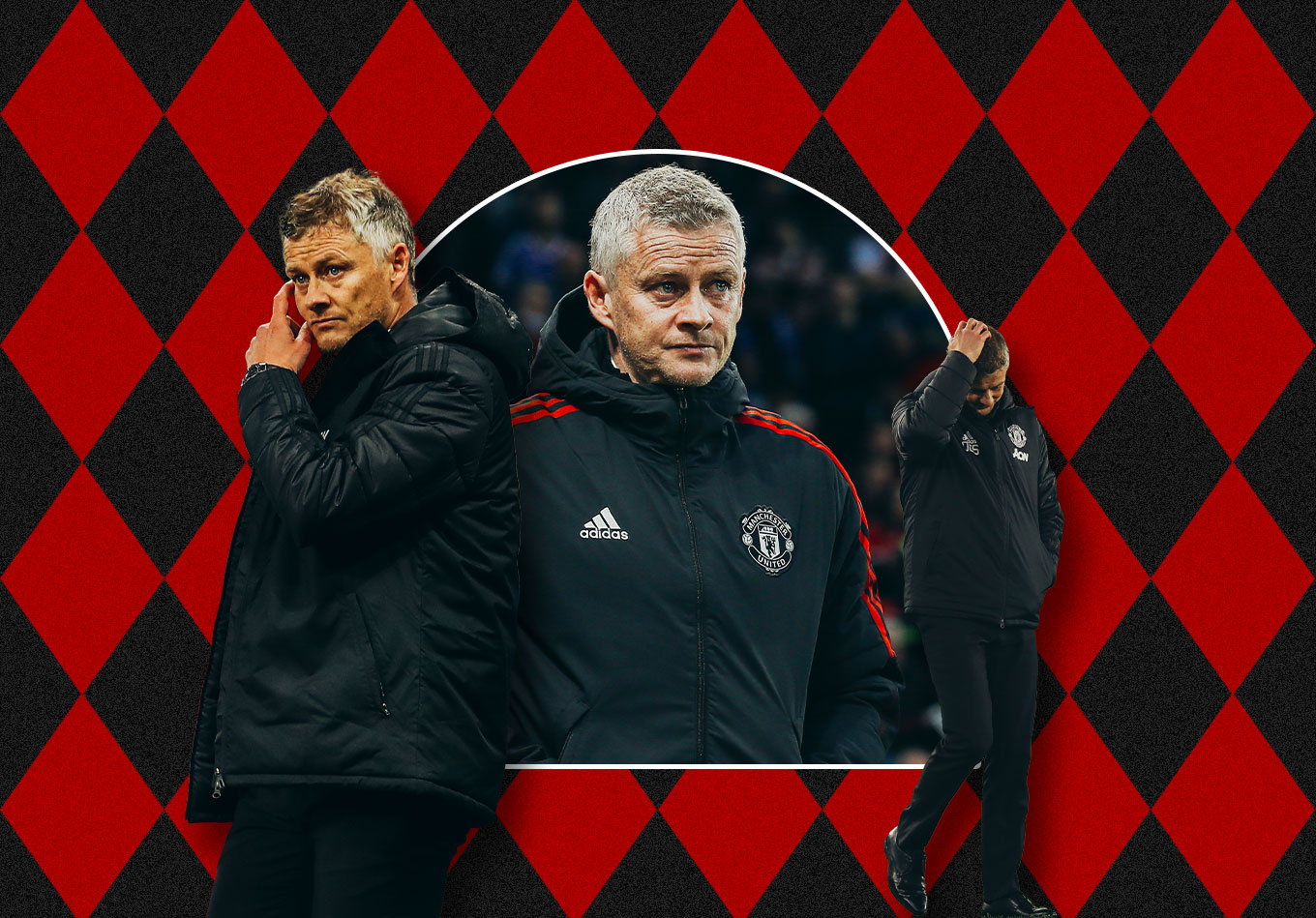 Solskjaer Hanging on, but Defeat to Liverpool Was No Surprise

Ole Gunnar Solskjaer is hanging on for dear life following a 5-0 defeat against Liverpool that will never be forgotten. This was a truly shocking and historic moment – an instant Premier League classic – and yet from a Manchester United perspective, it should not have come as a surprise.

It was a performance and result that had been coming for some time: confirmation of the club’s lack of coherent identity. Solskjaer might be a good man-manager and he might have fumigated a toxic Old Trafford following José Mourinho’s departure, but we’re three years into his tenure and his team don’t really stand for anything.

The cold, hard truth is that Solskjaer doesn’t appear to have what it takes. He has not demonstrated anything close to the tactical acumen to coach United’s players to the standards set by the likes of Pep Guardiola and Jürgen Klopp over the last half-decade of the Premier League, and while this has always been the case when it comes to attacking construction (more on that later) the Solskjaer project is unravelling because of a defensive problem, and even the defence is aware of it.

“I think at times we’re way too easy to play against,” Luke Shaw told Stadium Astro.

Even when United’s possession has been meandering in the past, even when their build-up play has been a formless gloop, Solskjaer could rely on a pretty solid defensive shape. Now even that has disintegrated.

This season Man Utd have attempted fewer tackles (104) than any other Premier League side and the third fewest interceptions (68). Only six teams have faced more shots on target, and only two have managed fewer than United’s single clean sheet. Perhaps most damningly of all, their duel win percentage is 47.5%, the lowest in the division. No, wait, there’s a worse one: they’ve made the most errors leading to shots (eight).

In all of these metrics, United’s numbers have dropped compared to last season, as the table below shows, and there are two main reasons for that.

The most widely recognised is the introduction of Cristiano Ronaldo, plonked at the arrowhead of the team’s formation. His disinterest in either pressing or blocking off passing lanes creates a rupture from which the rest of the team cannot recover. So far, he’s made fewer presses per 90 than any other Premier League forward to have played at least 270 minutes. It sets the tempo but also disconnects the forward line from central midfield – allowing opponents to pass the ball easily through the lines during the initial phase of build-up.

Leicester City’s 4-2 win a fortnight ago was the clearest example. Youri Tielemans consistently received a pass into feet from a Leicester centre-back and, turning 180 degrees in the gap between Ronaldo and the United midfield, was then able to play simple vertical passes into James Maddison. With two painfully easy balls, Leicester could cut United open, putting Fred and Scott McTominay in the unfortunate position of lunging desperately to cover the huge spaces through the middle of the pitch.

To illustrate the point, United recorded a total of just nine pressed sequences against Brendan Rodgers’ team, which is in the 76th percentile among all Premier League matches this season, while Leicester enjoyed 13 phases of possession where they made 10+ passes. They’ve only managed more against West Ham and Brighton.

The second reason for the defensive rupture is a strategy change from Solskjaer who, after spending heavily in the summer, has decided to play a more expansive game, particularly when facing big clubs. The idea is to sit higher, to spread out more, and to be a bit more adventurous… and if that all sounds a bit vague, well, that’s because it is.

As United look to press more, but seemingly without much coaching behind it, the tactical structure falls apart and United become a random swarm, sometimes literally falling over themselves in an attempt to mimic their rivals. It is telling that despite clear attempts to push higher and press harder, as Solskjaer has said multiple times in interviews, United are fifth bottom of the league for total presses (behind Tottenham Hotspur, Wolves, Norwich City, and Newcastle United) and rank lowly in various other measures of pressing:

Until now, Solskjaer has consistently avoided reaching crisis point by pulling big results out of the bag at the last, which he achieved by sitting his team in deep and rigid lines of four then waiting to improvise on the counter. It is the simplest tactical strategy to coach – the easiest way to compress space – but the United manager has now abandoned the one tactical element that was working. It has led directly to the concession of nine goals in the two Premier League games United have played against last year’s top five.

“I think, for example, you look at the first goal, it can’t be possible that they can have sort of three running through in the first five minutes,” Shaw said of Naby Keita’s fifth-minute opener. “We need to be more compact, we need to be better and we know that.”

Put simply, the depth of tactical detail in the modern game looks like it’s currently beyond Solskjaer’s reach. It requires years of tactical education to understand and coach the complexities of a unified press, or of the ‘automatisms’ required to enact structured and progressive possession. You cannot simply tell your players to press harder, to express themselves more, and expect it to work.

The Liverpool defeat was a horror show of wild, disordered pressing. For the first goal Mason Greenwood charged into the wrong position, Aaron Wan-Bissaka backed him up, and United left gaping holes in a domino effect of these lurching, panicky presses. This happened again and again for each of the Liverpool goals in what was the clearest sign yet that Solskjaer lags behind his contemporaries.

Only Watford rank lower than United for the average number of players involved in each press (2.31), which speaks to the individualism; the scatter-gun, make-it-up-as-you-go-along approach that was so obvious against Liverpool.

Astonishingly, United’s PPDA (passes allowed per defensive action) against Liverpool was the highest figure recorded in the league by any team this season at 62.1. Yes, losing Paul Pogba to a red card midway through the second half will have inflated that number, but it comes despite Solskjaer expressly attempting to press, as a report in The Athletic on Wednesday confirms: “Solskjaer is said to have given an instruction to press high on Liverpool but players were confused by the exact coordination. In training, United do not train much pressing, with an explanation being that the strategy under Solskjaer is for the man nearest the ball to close down the opponent in possession.”

But pressing is only one side of the modern game that paints the United manager in an unflattering light.

Overall, United’s attacking stats read relatively well: they rank third for shots on target (52) and third for big chances created (23) this season, just behind Liverpool and Man City on both counts, and are fifth for expected goals with 13.7. But the style of their build-up play into the final third is haphazard to say the least, relying on moments of individual magic rather than any cohesive pattern of play.

The ever-growing financial divide in the Premier League has created a pattern of possession-versus-counter, whereby the elite clubs are expected to dominate the ball and learn how to break down a deep-lying defensive shell. This is a trend that has increased consistently since Opta possession records began in 2003 (as measured by the number of games with a team having 60+% possession), but it jumped up significantly around 2016 – the moment Antonio Conte joined the Premier League and, along with Klopp and Guardiola, revolutionised the detail in structured possession football.

The new frontier of tactical strategy is learning how to outmanoeuvre a low block using ‘automatisms’: set-plays prepared in training until moves are etched into muscle memory. It is the natural next step to overcome the problem of territorial dominance – and the natural next step as coaches become increasingly exact in their instructions detailing where to stand, move and pass.

With United’s coaching team seemingly unable to teach these automatisms, they can at times look like a random splatter of red across the pitch. It contrasts starkly with the razor-sharp patterns – the even distribution of bodies, the neat one-touch football with players thinking and moving three or four steps ahead – we see at Manchester City, Liverpool or Chelsea.

United’s passing network against Liverpool shows this. The Red Devils create considerably fewer triangles and leave considerably larger patches of grass within the overall formation than their rivals.

The defensive collapse that defines the 2021-22 season is just part of the wider problem of Solskjaer’s coaching philosophy. It looks like he is going to survive for now, but it is surely just a matter of time, because after years of passive and formless football, the fundamental issues undermining Solskjaer’s tenure have finally tumbled out into the mainstream.