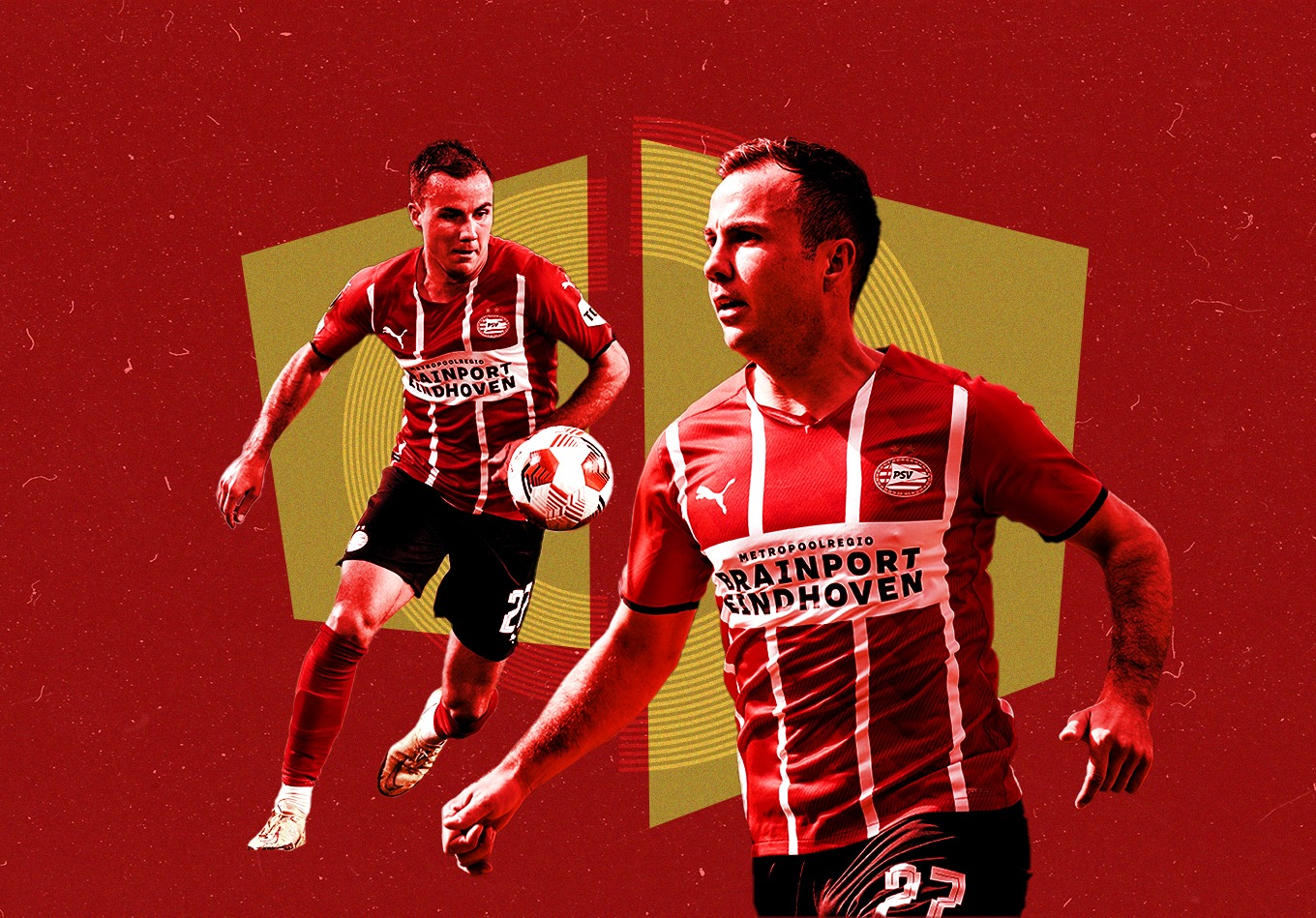 The Renaissance of Mario Götze

From a Bundesliga wonderkid and the only scorer and man of the match in a World Cup final at just 22 years old to arriving in the Dutch Eredivisie to kickstart his career just six years later, Mario Götze’s journey has taken some remarkable turns in the last few years. Still only 29, we look at the career of “Super Mario”.

Over the years, the Eredivisie has been home to some world class players. Romário, Ronaldo, Zlatan Ibrahimovic, Luis Suárez, and most of the Netherlands’ national team players have all launched their careers in the Dutch top-flight. These players usually travel on a one-way ticket – entering the Eredivisie as a youngster, maturing as a player before leaving for a bigger club in a more prominent league.

All that considered, when Mario Götze joined PSV Eindhoven on a free transfer on the eve of the 2020-21 season, the surprise could hardly have been bigger. Signing a former World Cup winner in his prime years, with almost 300 games in the Champions League and Bundesliga to his name is an extremely rare opportunity for a Dutch club. Sure, we knew the injuries and off-the-pitch issues that Götze had endured since that 2014 World Cup victory had an impact on the German – he’s not the ‘player’ he once was, and he found himself on the free agent scrapheap at only 28 years old. Many would see this as the end of their career, but Götze has battled back.

A Wonderkid Reaching his Potential

In his first few years as a professional, everything seemed to go according to plan for Götze. From making his Bundesliga debut under Jürgen Klopp at just seventeen years old, to playing 33 league games in his first full season and then becoming the youngest German national team player since Uwe Seeler, to then winning the Golden Boy award. Götze could count himself among the great players of his generation. Of all wonderkids born in 1992 – among them Neymar, David Alaba, Isco and Jack Wilshere – Götze seemed to be the most special.

Across his first three full seasons in the Bundesliga at Borussia Dortmund, Götze had a hand in 47 goals (22 scored, 25 assisted) in just 78 appearances – this naturally sparked interest from record champions Bayern Munich. Bayern went on to trigger his release clause and nab the German youngster from their rivals. It seemed like a great move at first, and after a relatively uneventful Bundesliga season in 2013-14 in which Bayern Munich won with a 19-point lead over Dortmund where he had a hand in 18 of their league goals, Götze enjoyed his moment suprême. With Germany and Argentina locked at 0-0 in extra time of the 2014 World Cup final, the then 22-year-old substitute slammed in the only goal of the game, just seven minutes shy of a potential penalty shootout. Germany became World Champions for the first time in 24 years and Götze had just won the trophy for them with a man-of-the-match performance.

Inevitably, after such a career high it was going to be hard to sustain that level. Sure enough, the downfall came. 2014-15 seemed to pass without much incident, with nine goals and two assists in 32 Bundesliga appearances – it even saw him shortlisted in the 23-man selection for the 2014 FIFA Ballon d’Or.

Towards the end of 2014-15, Götze was publicly criticized by Bayern legend Franz Beckenbauer for his performances. “He behaves and moves around on the pitch like a youth player. He just stops moving when he loses a duel. This is the behaviour of a child. This kind of behaviour does not fit in at Bayern. It is time for him to grow up,” was the view the former German captain – a damning statement on Götze. The following season was his last at the club, playing 957 minutes – just 31% of possible playing time in 2015-16.

He returned to Dortmund in 2016-17 and from 2017 onwards, Götze’s career appeared to be slowly falling apart. Reportedly suffering from metabolic issues, the midfielder missed a lot of minutes, lost form and picked up even more injuries. In his final year at Dortmund, he made only five starts in the entire Bundesliga season.

So, at the end of his contract in 2020, there was little cause to renew it. Götze found himself a free agent right after his 28th birthday, at a moment in his career where he was supposed to peak. Had he flown too high?

A German Partnership in Eindhoven

In hindsight, Götze becoming a free agent could not have come at a better time, as Roger Schmidt had simultaneously begun to build a new squad at PSV. The former Leverkusen and RB Salzburg manager had already signed some old acquaintances and managed to convince Götze to join the Eindhoven side as well. Schmidt felt that Götze could be the missing piece in the puzzle once he could get his fellow German in the right shape and Götze felt he had found the right challenge at PSV.

A little over a year later, there is little doubt that Götze is back in shape and on his way to reaching the levels we witnessed earlier in his career.

Since the start of 2021 in particular, the German has impressed with some great performances in both domestic and European competitions – dominating games like he did during his first spell at Dortmund. Across the calendar year, he’s already played the full 90 minutes on 16 occasions, which might not seem a big deal, but for Götze it’s his most in a single year since 2015 (18) and on course to surpass his World Cup-winning year of 2014 (19) at club level.

Playing under Schmidt means you are expected to put a lot of effort in pressing opponents aggressively. Especially for an offensive midfielder, this means a lot of running and chasing, which Götze seems happy to do. Him running over 10 kilometres in a game has become more of a rule than an exception, while he has been improving his ball-winning abilities as well. So far in his PSV career, he’s won possession back in the final third of the pitch at an average of 1.3 per game – over double his rate at Bayern (0.6).

But it’s not only hard work: Götze’s still got the finesse. While he fulfils an important role in pressing the opponents when they’re in possession, the German is an extremely dangerous threat when he’s in possession himself.

A simple list of PSV’s top creators in all competitions in 2021-22 shows that no one comes close to Götze’s creativity. He’s created 13 more chances from open play than any other teammate (37), providing six assists in the process. That is no coincidence, as he’s been allowed the freedom to roam when PSV is in possession, enabling him to look for promising positions to receive the ball.

In the Dutch top-flight this season, he’s been involved in 35 open-play shot-ending sequences for PSV – 14 of those as the creator, which is another team-high.

What more can we expect from Mario Götze? As he’s recently renewed his contract at PSV until 2024, there is hope among Eredivisie watchers that the German is planning to stay for a while. Götze will want to win the league and play in the Champions League after PSV just missed out on the group stage this season. Those goals would be perfectly fine, but still.

Although there is absolutely no shame in competing in the Europa League, there is an uneasy feeling seeing one of this generation’s finest talents playing in Europe’s second-level tournament. Götze himself is not one to complain about that – he is happy to be healthy and appreciated. While he counts his blessings, the Eredivisie fans will do the same.