Manchester United vs. Liverpool Through Time: The Viz | The Analyst 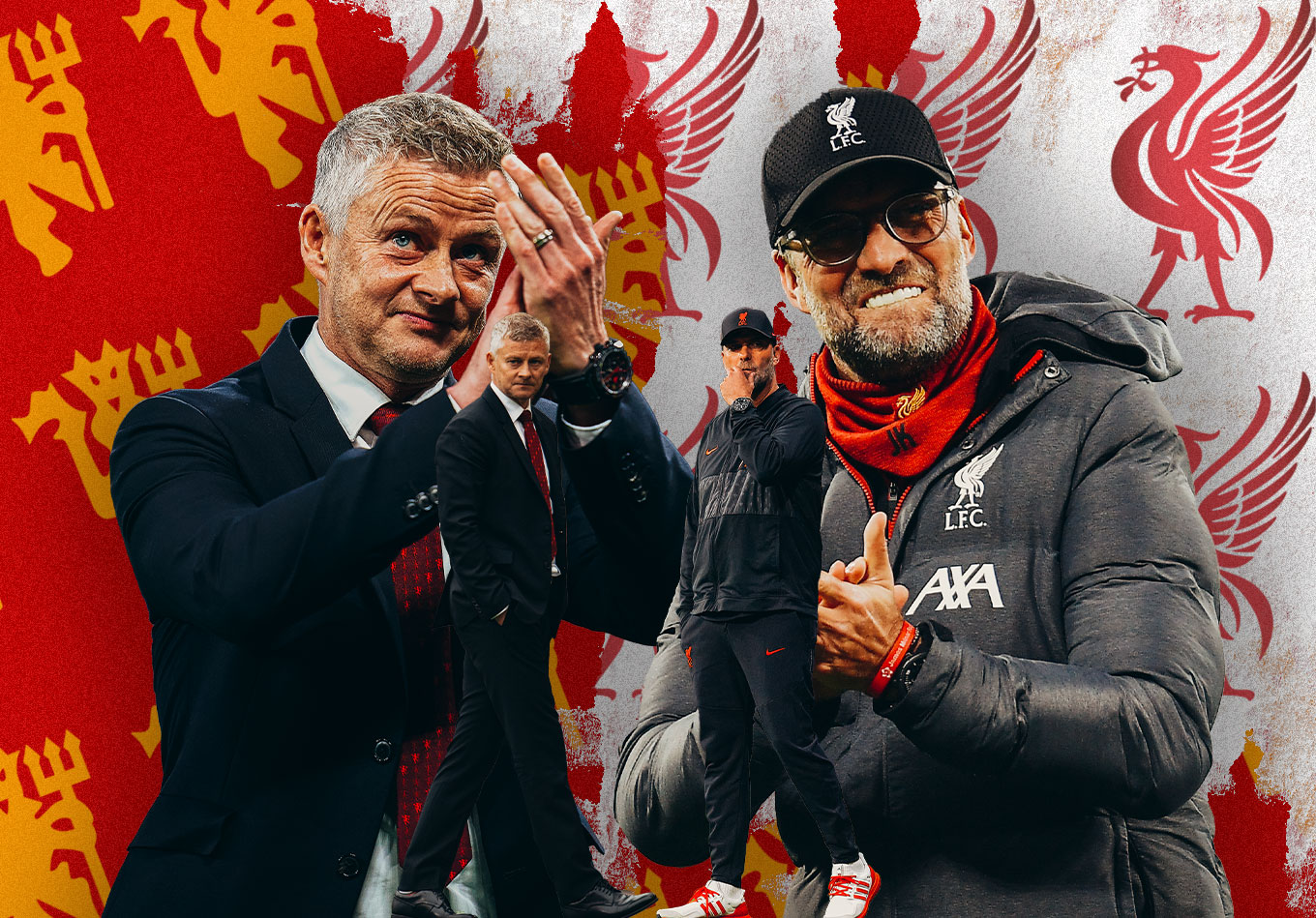 Manchester United and Liverpool renew their rivalry this weekend, with the two most successful English clubs meeting in the Premier League at Old Trafford. It’s the biggest fixture in the English football league calendar, so we decided to look at the game through time with a delightful array of data viz.

Including Man Utd’s years as Newton Heath, this will be the 208th meeting between these two clubs in all competitions. A fixture fuelled by the close proximity and industrial rivalry of the two cities, this is considered one of the biggest in English league football – so much so, that most fans would consider this bigger than their respective local derbies against Manchester City and Everton.

Manchester United lead the head-to-head record in this fixture across all competitions, with 81 wins to Liverpool’s 68 – just two of these wins have come in the last 13 encounters, however (W2 D7 L4).

Liverpool enjoyed a 4-2 victory at Old Trafford the last time the two sides met, back in May 2021. Should they seal another win in this game, it would be the first time that they’ve won two in a row against United since a run of three victories in October 2009. The last time that Liverpool won two trips to Old Trafford in a row came back in January 2002 under Gérard Houllier.

In league competition, Man Utd have failed to win against Liverpool in six successive attempts now – losing three and drawing three. This is their longest winless run against their rivals in the league since a seven-game spell between December 1989 and October 1992.

Manchester United’s 20 top-flight English league titles is a record, with Liverpool’s 2019-20 success their 19th top-flight crown – meaning these two clubs are the most successful in England.

Coming into the era of the Premier League in 1992-93, Liverpool led Manchester United by 18 titles to seven, but Sir Alex Ferguson’s first English title in 1992-93 changed the landscape. The Red Devils were able to win eight of the first 11 Premier League titles, eventually equalling Liverpool’s record in 2008-09 before overtaking them two seasons later with the 2010-11 title. Liverpool’s 2019-20 success – their first league title in 30 years – came in the covid-disrupted campaign, but they did it in style: winning the league with seven games to spare, to break the all-time top-flight English league record.

United finished below Liverpool in the English league pyramid across 23 successive seasons between 1968-69 and 1990-91, a record for either club in the rivalry and a run that ended with Manchester United’s 2nd place finish in 1991-92 – four places above Liverpool in sixth. The biggest gap ever seen between these two sides came in 1954-55, when United finished fifth in Division One while Liverpool ended in 11th place in the second tier. The record in the other direction is Liverpool’s title-winning 1900-01 campaign, when they finished 27 places above United in the league system – then as Newton Heath, who finished 10th in the Second Division.

As well as winning the most English top-flight league titles, these two clubs have the highest win ratios in the top-tier. United’s 48% edges Liverpool’s 47.2%, but Liverpool have secured the most wins (1993) and will almost certainly be the first team to reach 2000 top-flight wins later this season.

Liverpool have only finished above Manchester United in five of the previous 29 Premier League seasons but four of these have some in the eight campaigns since the retirement of Ferguson at the Red Devils in May 2013.

Since Ferguson’s retirement, United have an even Premier League record in this fixture with five wins apiece and six draws, but they have performed much worse than Liverpool overall. Since the start of 2013-14, Manchester United have won the fifth-most points (570), behind Spurs (573), Chelsea (606), Liverpool (640) and local rivals Man City (691).

In the above viz, you can clearly see a dramatic drop in United’s rolling 38-game points average following Ferguson’s departure, after a season of struggle under his replacement David Moyes, where they could only manage seventh place. This reached an all-time Premier League low point in February-March 2020 when United had averaged just 1.39 points per game over their previous 38 games.

United’s 38-game average currently stands at 1.97 points per game, with it being as high as 2.11 last month. This is higher than Liverpool’s record across the same time span, with their ratio currently at 1.84 – but it seems only one manager is under pressure ahead of this fixture, despite a better 38-game run than his opponent.

Earlier this month, Jürgen Klopp celebrated six years in charge of Liverpool following his appointment on October 8, 2015. Since his arrival, only Manchester City (508) have won more points than the Reds (482), with that points tally being 62 more than Man Utd from the same number of matches (228).

Klopp’s average of 2.11 points per game at Liverpool is the fourth-best ratio by a Premier League manager to have taken charge of at least 100 games in a spell at a club. José Mourinho’s first spell at Chelsea between August 2004 and September 2007 remains the best of all-time (2.33), with Pep Guardiola’s 2.32 ppg just behind.

Solskjær has averaged 1.85 points per game as Manchester United boss in the Premier League, the second-best at the club behind Ferguson (2.16). The Norwegian’s ppg average is the same as Kevin Keegan’s at Newcastle but below that of Rafael Benítez at Liverpool (1.90) and Mauricio Pochettino at Spurs (1.89).

Solskjær has overseen 105 Premier League games at Man Utd now, with the 194 points collected during his tenure the third-most collected behind only Man City and Liverpool (both 238). Interestingly, this is only two points fewer than Klopp at this stage of his Liverpool tenure (196, 1.87 ppg), but game no. 106 at Liverpool was the turning point.

Between games 106 and 171 of his Premier League managerial career, Klopp’s Liverpool side lost just one of their 66 matches (W57 D8 L1) and won 179 of a possible 198 points at a ratio of 2.71 points per game. Leading up to their shock 3-0 away defeat to Watford in February 2020, Liverpool had averaged a frankly ridiculous 2.89 points per game over 38 matches, dropping only four points overall. Had that been a complete season, Liverpool would have accumulated 110/114 points.

No Liverpool manager has ever gone seven league games in a row unbeaten against Manchester United – something Klopp could do here. Conversely, Solskjær could be the first United manager since Ferguson to go six games without winning against Liverpool (7 games between December 1989 – October 1992), with Tommy Docherty the last Man Utd manager to go six winless against the Reds from the start of his tenure (1973-1977).

We’re only eight games into the 2021-22 Premier League season, so the style of play of all 20 sides should probably be taken in context of the opponents that they have faced so far. With that being said, from these eight games so far, it would seem that the styles displayed by both United and Liverpool could mean this game is one to watch.

Of the 20 teams in the league this season, these two sides are the fastest yet intricate in the division – both United and Liverpool progress up the pitch quickly but do so with a shorter passing ethos rather than using long passes.

Only Leeds United (19) have had more direct attacks this season in the competition than both Liverpool and Man Utd (18), with direct attacks being open play sequences that start inside the team’s own half and has at least 50% of movement towards the opponent’s goal, ending in a shot or a touch in the opposition box.

Not only do Liverpool shoot frequently, but the average quality of these non-penalty shots are also impressive. Only Brentford (0.126) and Wolves (0.122) have averaged a higher xG per non-pen shot than Liverpool (0.119) in the Premier League this season.

Through the entire Premier League, Manchester United had never won more penalties in the competition than Liverpool…until the final day of the 2020-21 season, when Donny van de Beek was fouled by Wolves’ Romain Saiss and following a VAR review with Mike Dean a penalty was awarded.

This took United’s penalty tally one above Liverpool’s (166 v 165), with both sides being given one penalty since then they are the two teams with the most penalties won in Premier League history.

Despite both teams leading the charts for penalties taken in the competition, there have been just 19 awarded in 58 Premier League meetings between Man Utd and Liverpool – with three fixtures having won more and Spurs vs Liverpool (23) the highest.

Manchester United’s penalties fortunes really turned around following the arrival of Solskjær as boss. Since being named in December 2018, United have won 33 spot-kicks in the Premier League: 10 more than any other side, with Man City’s 23 the next most.

With 33 penalties in his 105 games in charge, he has seen United average a penalty every 3.2 Premier League matches – the lowest average by any of the 176 reigns of 40+ games by a Premier League manager.

Those 33 penalties in 105 games are also one more than Klopp has seen Liverpool awarded (32) in his 228 games in charge within the competition.