Italy vs. Spain: La Roja's Domination the Inspiration Behind Azzurri 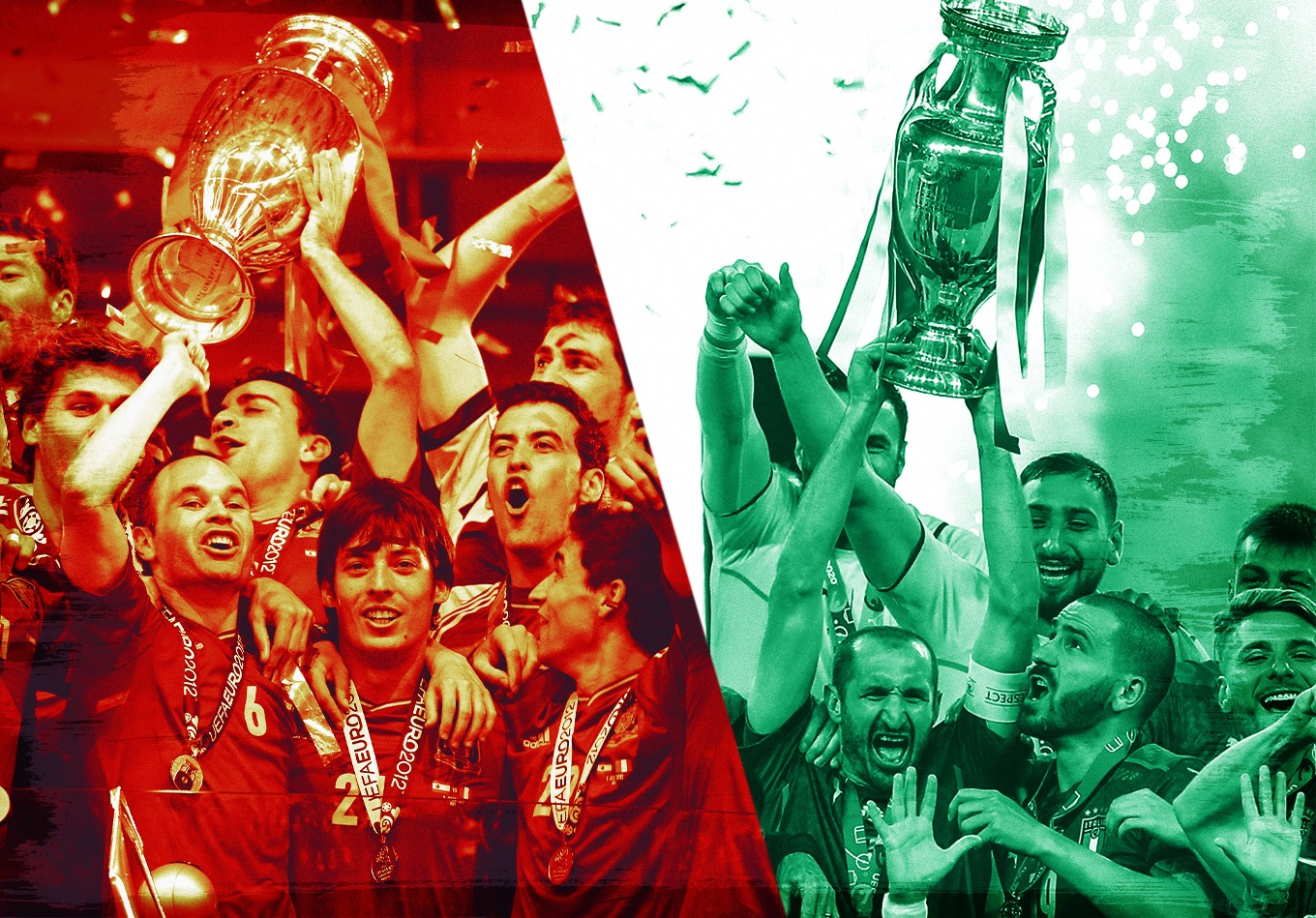 Spain equalled a world record amid their international dominance. That record now belongs to an Italian side hoping to emulate La Roja.

After 15 years without success on the international stage, Italy could win a second title in three months this week as the 2021 Nations League concludes.

That may come as a surprise to some – after all, given how recent Euro 2020 was and the fact the Nations League Finals are taking place amid a busy World Cup qualification period, it wouldn’t be unsurprising if most people had completely forgotten about UEFA’s secondary competition.

But here we are, it’s Finals week and hosts Italy have themselves a wonderful opportunity to clinch another trophy, with Portugal winning the inaugural competition – also in front of home crowds – two years ago.

France and Belgium will contest the second semi-final, with Italy going up against Spain first on Wednesday in a repeat of their Euro 2020 last-four clash, which Roberto Mancini’s men won on penalties.

Italy head into the tournament amid a world-record 37-match unbeaten run, last month’s draw with Switzerland and the subsequent 5-0 win over Lithuania taking them clear of Brazil and Spain.

Of course, the Spain team that had previously equalled Brazil’s world record back in 2009 were in the throes of their most successful period ever, and Italy will hope that’s a sign of things to come for them.

That legendary Spain side saw their 35-match unbeaten streak – a run that included Euro 2008 success – ended in 2009 by the United States.

While the Confederations Cup was never really seen as a hugely important title, hence FIFA pulling the plug on it in 2019, the USA’s 2-0 win in the semi-finals 12 years ago was a fairly big deal.

Jozy Altidore’s opener was the first goal Spain had conceded in 451 minutes of play and only their third concession in 17 matches, and it was added to by Clint Dempsey.

On the 10th anniversary, Spanish publication AS referred to it as “one of the biggest upsets in football history”. A little hyperbolic? Sure, but it certainly was a shock.

For starters, it remains Spain’s sole defeat in five meetings with the USA, while it’s still their only loss to a CONCACAF nation in 23 matches.

But perhaps the key fact from Spain’s perspective was coach Vicente del Bosque’s assertion of it only being a “little step backward” – a little over a year later, Spain were World champions for the first time and then they followed that up with Euro 2012 success.

That made them the first team since the foundation of the World Cup in 1930 to win three successive major international titles.

It was an iconic side that was routinely filled with players who’ll always be remembered as all-time greats for La Roja.

The foundation of their ascension to greatness lay in that unbeaten run, and Italy will find a similar status awaits them, regardless of how long they stay undefeated.

Many took for granted just how many remarkable players that Spain squad contained – it’s unlikely they’ll ever produce the same collective greatness in such a small period.

Xavi was the metronome and, as such, a key component. He played in all but two of the 35 matches in that unbeaten run, with Sergio Ramos (31), David Villa and Iker Casillas (both 29) next on the list.

But when it came to goalscoring, one man above all was the crucial cog: Villa.

A lethal striker for Valencia, Barcelona and – to a slightly lesser extent – Atletico Madrid at the peak of his powers, Villa scored 23 goals during La Roja’s famous run, almost three times as many as anyone else. Fernando Torres was next with eight.

Luis Enrique’s current team could do with a player of Villa’s skillset, given the dearth of quality available to him in that position. After all, his squad for this week has no recognised centre-forward in it, with Ferran Torres arguably the closest to fitting the bill.

Cesc Fabregas was the man supplying the best service for Spain’s goals in that period, with his 12 assists the most impressive return, while Xavi and Andres Iniesta had seven apiece.

Spain’s incredible run compromised of 32 wins and just three draws, while they scored 73 times and conceded only 11.

A Team, No Superstars

Of course, Italy’s world-record effort has already proven successful, with the 37-match run including their Euro 2020 triumph.

And in certain ways, it has actually been more fruitful than Spain’s, with the Azzurri scoring 93 goals and letting in just 12, though nine of those matches were drawn.

While Spain spent 174 minutes trailing, Italy have spent even less time behind in matches, just 109 minutes, and 65 of those were in one match – the Euro 2020 final against England.

The Azzurri have been much less reliant on a single goalscoring outlet as well, which is perhaps explained by the theory they are less a collection of superstars but instead a tremendous team unit.

Ciro Immobile is their top scorer over the last 37 matches, his haul of eight insignificant compared to Villa’s 23, whereas Lorenzo Insigne has been their most reliable source of creativity with seven assists.

But 10 players have scored at least four times for Italy, compared to only five in that Spain team.

Roberto Mancini’s comfort with rotating and being able to adapt to different groups of players has really shone through.

While the Spain side of Luis Aragones and then Del Bosque had 11 players feature 24 or more times, only five Italians have played that often in Mancini’s run, while the most he has used any single starting XI is twice – Spain’s most-used line-up was put out four times.

But the important thing most people remember when looking back at that Spain squad is not any specific unbeaten run in itself, but the wider context and history that streak was a part of.

Similarly with Italy, the vast majority of people in 10 or 15 years arguably won’t give much thought to their world-record unbeaten run because winning Euro 2020 is a bigger deal.

But Mancini and Italy will surely be hoping that was just the start of a period of domination, one that Spain’s unbeaten streak seemingly foretold.

While Nations League success isn’t going to elevate them to iconic status, it does provide another opportunity to continue building on a winning mentality ahead of next year’s World Cup, and the fact they are unbeaten in 61 competitive matches on home soil since 1999 is a good omen.

Succeed in Qatar and then we can start to talk about Italy’s legacy.