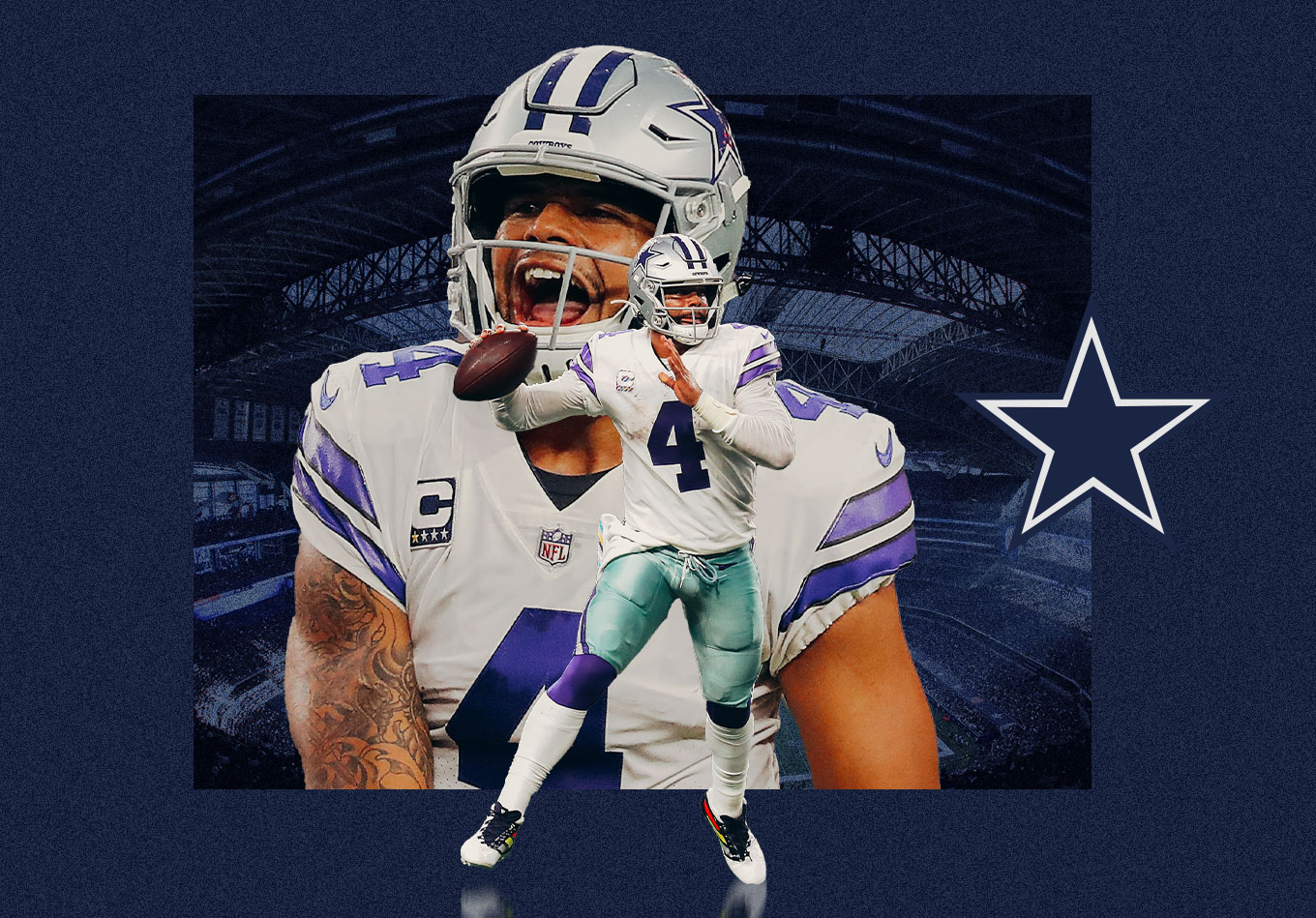 There has never been much room on the ‘America’s Team’ bandwagon.

Each NFL season seems to begin with scores of pundits and observers scrambling to find a reason why this could be the Dallas Cowboys’ year.

The difference in 2021 is they may actually be right.

Not since their Super Bowl win at the end of the 1995 season have the Cowboys reached the NFC championship game. But riding a five-game winning streak after a thrilling 35-29 overtime victory over the New England Patriots in Foxborough, there is no doubt the Cowboys are legitimate contenders.

And, though there are supplementary factors behind their success on both sides of the ball, the primary reason for that status is clear: Dak Prescott is playing arguably the best football of his career.

On his 75th career start, Prescott was once again imperious against the Patriots. He passed for 445 yards with three touchdowns and one interception, posting a passer rating of 108.7.

It marked his 39th game with a passer rating of at least 100, surpassing Philip Rivers (38) for the third most such games by a player in his first 75 starts. The two players above him are the man he replaced in Dallas, Tony Romo (41) and Aaron Rodgers (43).

Should he continue performing at the standards he has displayed through five weeks, a Prescott vs. Rodgers conference title game is not out of the question.

Returning from a compound fracture and dislocation of his right ankle that he suffered in Week 5 last year and entering the season with concerns over a shoulder injury, there were plenty wondering whether Prescott could recapture the form that saw him receive a four-year, $160 million contract extension from Dallas in the offseason.

Any such doubts have been emphatically dispelled.

Helming a Dallas offense that leads the NFL with an average of 6.58 yards per play, Prescott is second in the NFL with a completion percentage of 73.1, while he and Matthew Stafford are tied for the league lead in throws that have resulted in a first down, moving the sticks on 44.0% of attempts.

Completion percentage is not necessarily connected to a quarterback’s accuracy, yet in Prescott’s case, the link is clear.

Prescott has posted a well-thrown percentage of 82.9%, which is fourth among quarterbacks with at least 50 attempts this season. He trails only Kirk Cousins (84.6), Kyler Murray (84.0) and Patrick Mahomes (83.3).

A quarterback who has received comparisons to Peyton Manning for his work at the line of scrimmage, Prescott’s poise has allowed him to maintain his accuracy almost irrespective of the situation.

His well-thrown percentage under pressure is 77.1%, the average being 70.0, with only Murray (78.1) and the Patriots’ Mac Jones (81.4) above him among quarterbacks to have come under duress on at least 20 attempts.

Prescott has also been precise when throwing on the move, producing an accurate pass 85.7% of the time in that scenario. The former fourth-round pick’s composure under pressure and ability to deliver on the move shone through in the biggest moments at Gillette Stadium.

On second-and-11 early in the fourth quarter, Prescott connected with CeeDee Lamb for 33 yards after shuffling to his right and resetting his feet before delivering with late-arriving pressure in his face. On the final drive of regulation for Dallas, Prescott put the ball where only Cedrick Wilson Jr. could go up and get it on a critical fourth-and-5 with Matthew Judon bearing down on him following a spin move on right tackle Terence Steele.

His first throw of overtime was another hook-up with Lamb while rolling to his right and that drive culminated in Prescott finding the same receiver after executing a play-fake left and moving the opposite direction, hitting the second-year receiver on the over route on a throw delivered with his weight falling away to give Dallas a walk-off win.

It could be argued that the Cowboys’ own miscues put themselves in such a tight game, and his own coach is perhaps Prescott’s most significant obstacle to him delivering long-awaited glory to Dallas this season.

The Cowboys should be happy about the upcoming bye week after seemingly surviving a scare when left tackle Tyron Smith limped off with an ankle injury on Sunday, only to return after having it taped.

Smith will have the chance to rest and nurse his ankle and a troublesome neck problem, and by the time the Cowboys are back in action, they should have the entirety of their starting offensive line, with right tackle La’el Collins set to return from a five-game ban.

Dallas and head coach Mike McCarthy could also use the extra week to evaluate in-game decision-making, which made life a lot harder on Prescott in Week 6.

Whether it was the decision to call four successive runs from the New England 1-yard line in the second quarter, a sequence that ended with Prescott fumbling at the goal line, or McCarthy’s call to settle for a go-ahead 51-yard field goal on fourth-and-2 late in the final quarter, the Cowboys’ game management was a problem throughout.

McCarthy was bailed out after the latter mistake, Greg Zuerlein’s missed kick followed by a Pick 6 of Jones from Trevon Diggs, but the Cowboys cannot expect to get away with such misjudgements every week.

The Cowboys have an offense teeming with playmakers that is the most efficient in the league by yards per play and a defense second in takeaways with 14, Diggs (seven interceptions) accounting for half of those.

A potent offense and an opportunistic defense is a formula for a Super Bowl challenge, yet it can be ruined if the head coach consistently comes up short with his decisions in situational football.

Prescott has the Cowboys firmly on the path to the title push they have long since craved. It’s the man they hired to lead that charge who is the biggest threat to their dreams coming to fruition.