Bungles No More: How Burrow and Chase Are Restoring Cincinnati as an AFC Contender | The Analyst 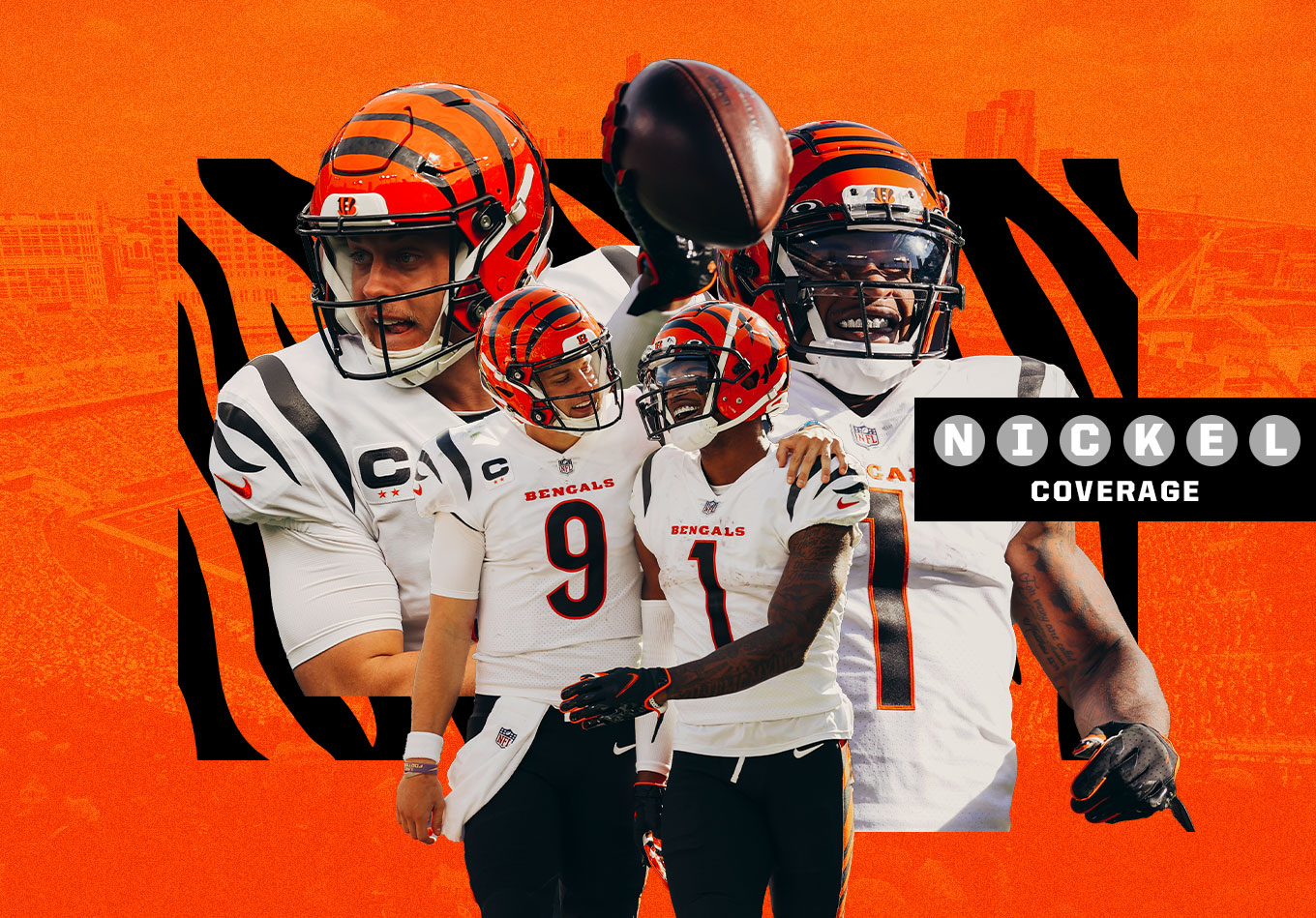 Bungles No More: How Burrow and Chase Are Restoring Cincinnati as an AFC Contender

Few things in the NFL are as important as continuity.

Teams that develop an understanding through the experience of consistently lining up with the same players have a distinctly better shot of enjoying success than those who are constantly chopping and changing.

Joe Burrow and Ja’Marr Chase already had a well-established rapport from their time at LSU, where they combined for 20 passing touchdowns in 2019 as a high-powered passing game helped the Tigers surge to a national championship.

The Cincinnati Bengals banked on that partnership translating to the pro game. A year after taking Burrow with the first overall pick in 2020, they passed on the top offensive linemen in the draft, much to the bemusement of many observers, to select Chase fifth overall.

Their faith in the mind meld between quarterback and wide receiver has, to this point, been handsomely rewarded.

Burrow threw for a career-high 416 yards and three touchdowns on Sunday while Chase went for 201 yards and a score on eight catches to help the Bengals emphatically brush aside the Baltimore Ravens 41-17 and take the lead in the AFC North.

With Cincinnati sitting pretty at 5-2, doubts over whether Burrow could showcase the required progress after the knee injury that prematurely ended his rookie year are a thing of the past. Meanwhile, Chase is in hot pursuit of history and looks a near-lock for NFL Offensive Rookie of the Year.

Separated by a year, Burrow and Chase remain firmly on the same page, and they are helping a well-balanced Bengals team write an exciting new chapter in the story of a franchise that has predominantly been a tale of its shortcomings.

Burrow, who racked up 406 yards and three scoring throws in a meeting with the Cleveland Browns last year, became the fourth player with two games with at least 400 yards and three touchdown passes within his first 20 career outings.

He joins a select club also featuring Patrick Mahomes, Nick Foles and Billy Volek. Given the contrasting careers experienced by those three quarterbacks, that achievement is no guarantee of future success.

However, the displays Burrow has put on show through seven games suggest he is on the right path to vindicating his selection as a first overall pick and becoming a top-tier NFL quarterback.

Burrow does not have the strongest arm in the league, but he can beat defenses with his accuracy and his poise, both of which came to the fore against the Ravens.

He delivered a well-thrown ball on 80.6% of his passes against the Ravens. That was only just above the league average of 79.8 for the week, but it was the highest among quarterbacks who threw 10 passes to have averaged at least 9.0 air yards per attempt.

Burrow finished the game with 11.0 air yards per attempt, illustrating his willingness to push the ball deep regardless of his perceived deficiencies in arm strength compared to some of the league’s best. And he remained accurate and aggressive in the face of pressure, his composure and intelligent movement in the pocket allowing him to excel even with Ravens pass rushers in his vicinity.

Burrow’s well-thrown percentage under duress was 81.8%, while he averaged 13.55 air yards on his 11 pass attempts with pressure.

Frustrating the Ravens with his ability to evade defenders in the pocket, Burrow’s cool was exemplified by the Bengals’ first touchdown of the game, which saw him shuffle to his left to avoid the monstrous figure of Calais Campbell after a play-action fake and uncork a perfect deep ball to an open C.J. Uzomah.

His prowess in that area has enabled Burrow to thrive while negating the issues on a still problematic offensive line, and having a receiver on a record-setting pace who has put concerns over his skill set to bed has significantly aided the 2019 Heisman Trophy winner’s cause.

The Bengals selected Chase after a pre-draft process that saw plenty of pundits voice their doubts about a player who opted out of the 2020 college football season and who often relied more on physicality than his route-running to defeat the coverage of opposing cornerbacks.

Averaging 107.7 yards per game, he’s on track to smash the Super Bowl-era record for rookie receiving yards set by former LSU teammate Justin Jefferson, who finished the 2020 season with 1,400, and the all-time record of 1,473 by Bill Groman of the Houston Oilers in 1960.

Chase, who is on pace for 1,830 yards, is producing at such a rate in part because of the prowess he has displayed as a route-runner.

Going against an All-Pro cornerback in Marlon Humphrey, who went into Week 7 having allowed receivers to get open on only 19 of his 72 coverage matchups, Chase excelled at creating separation.

With 32 seconds left in the first half, Chase beat Humphrey’s press coverage through selling an outside release and cleverly using his hands to render the corner’s attempt to jam him immaterial as he got free over the middle for a 26-yard catch and run, setting Cincinnati up for a go-ahead field goal.

But Chase saved his best for the game-breaking play of the contest. Initially stemming outside as he lined up against Humphrey again, Chase showed his lower-body flexibility with a fluid break back to the inside on the slant. He then adjusted to a pass thrown slightly behind him before using his balance and body control to avoid three tackle attempts and proceeded to gallop free for an 82-yard score from which the Ravens never looked like recovering.

Chase is fourth in the league in total burn yards with 841, behind only big-play veterans Cooper Kupp, DJ Moore and Davante Adams.

Announcer Kevin Harlan’s description of Humphrey being “in a blender” could hardly have been more accurate and it encapsulated what Chase has blossomed into at the next level.

Producing a big play on 41.1% of his targets – the sixth-highest rate among receivers with at least 25 targets – Chase is a wideout who can discombobulate even the most accomplished NFL corners, and more defenders seem likely to suffer the same fate as Humphrey as the Bengals plot a long-awaited return to the playoffs.

Cincinnati’s rise back to prominence is not all about Burrow and Chase, though.

They have played the most substantial role in the Bengals putting up 6.22 yards per play on offense, the third-best average in the league. Yet a Bengals defense that held the Ravens to their lowest point total of the campaign is also worthy of significant praise.

Cincinnati’s defense is allowing 5.14 opponent yards per play – the fourth fewest in the NFL – while doing an excellent job of putting opponents behind the sticks. Indeed, only the Carolina Panthers (48) have forced more negative plays from their opponents than the Bengals (47).

The combination of an efficient offense boasting a receiver adept at delivering explosive plays and a defense that excels at creating plays where their opponents lose yardage is a winning formula that can lift the Bengals to stunning upsets over well-established contenders like the Ravens.

It remains to be seen whether it can be sustained, but a franchise that at regular intervals in its history has been known for poor personnel decisions and underwhelming performances is being rewarded for making the right choice in this year’s draft and seeing its roster compete with rivals that entered the season viewed as existing on another level altogether.

It’s way too early to declare the Bengals a complete team. Seven weeks of evidence is not enough for an organization that has not enjoyed a winning season since 2015.

However, what can be said with some certainty is Burrow, Chase and a defense performing well above expectations have put the Bengals in a position where results akin to what they produced in Baltimore will not be a surprise for much longer.