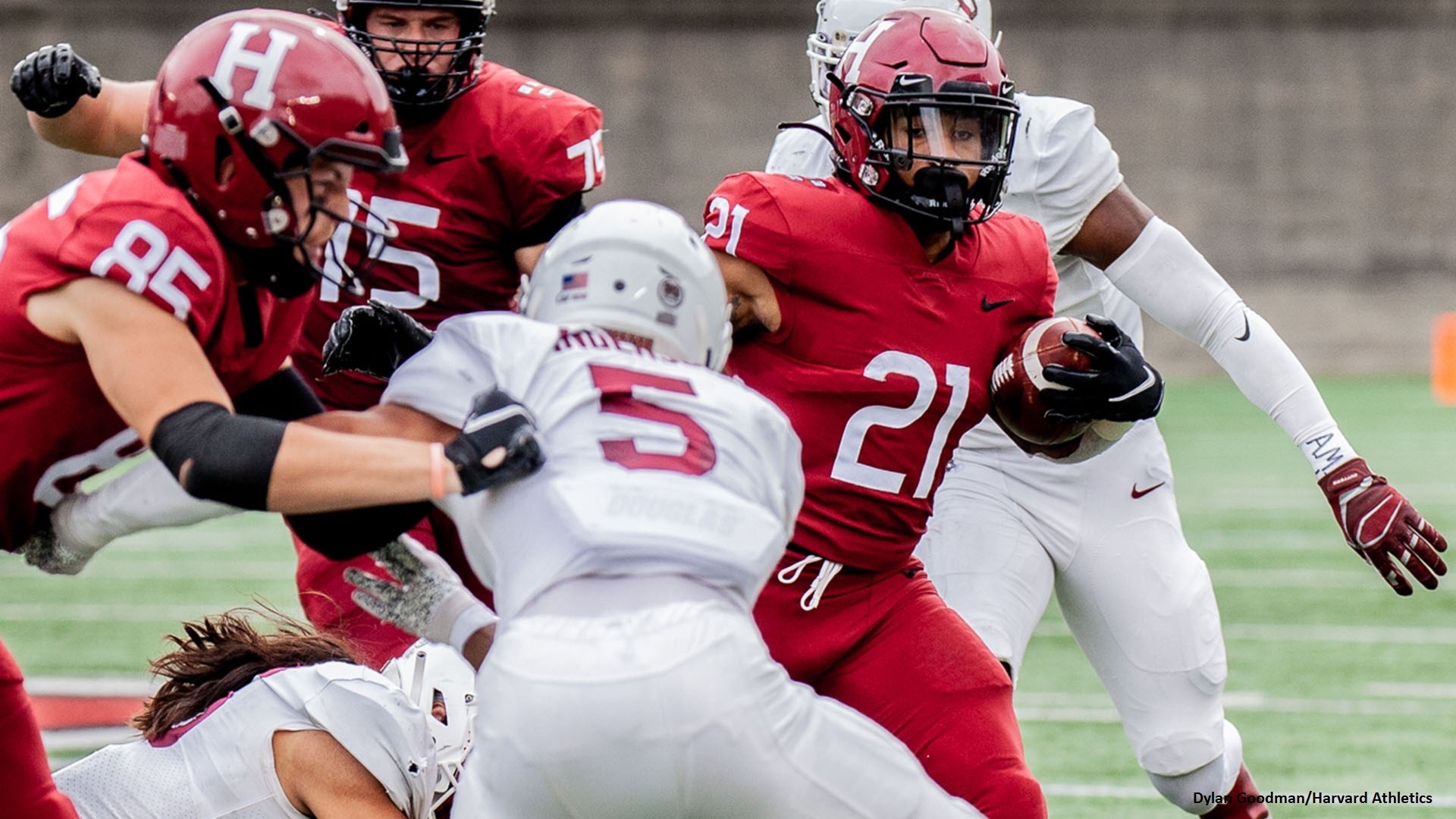 The beginning of the second half of the FCS season this weekend looked a lot like the first half, with heads shaking everywhere in disbelief.

Another eight ranked teams lost games on top of the nine last week.

And, yes, the Eric Barriere vs. Cole Kelley duel continued.

Here are 10 takeaways from the Week 7 action:

After being the only Division I conference to skip competition in the 2020-21 academic year due to the pandemic, the Ivy League has reached the midpoint of its schedule with three 5-0 teams – Dartmouth, Harvard and Princeton – which hasn’t happened in the Ancient Eight since 1968. Dartmouth received high production from its two quarterbacks, Derek Kyler (326 passing yards, two touchdowns) and Nick Howard (96 rushing yards, three TDs), in a 38-21 win at No. 23 New Hampshire, and Harvard’s Aidan Borguet rushed for 169 yards and two TDs in a 30-3 victory over Lafayette, which helped the Ivies finish off a 17-7 non-league record. Princeton’s Cole Smith passed for four touchdowns and Collin Eaddy rushed for four in a 56-42 Ivy win at Brown. The last FCS conference to have three teams start 5-0 was CAA Football in 2009 (New Hampshire, Richmond and eventual national champion Villanova).

Three other returning teams get their biggest wins of season

Dartmouth was one of four teams that didn’t play last season to beat a ranked opponent this weekend. Montana State (6-1, 4-0) was actually the higher ranked team at No. 9 when it won at No. 19 Weber State 13-7, perhaps ending the four-time defending Big Sky champion Wildcats’ hope of adding to their five straight playoff bids. Sacramento State (4-2, 3-0) also remained unbeaten in the Big Sky, upsetting No. 5 Montana 28-21 for its first win in 13 all-time trips to famed Washington-Grizzly Stadium. Towson (3-3, 2-1 CAA) handed No. 12 Rhode Island its first loss 28-7, getting a huge performance from linebacker Christian Dixon (11 tackles, four tackles for loss, two sacks, forced fumble) while limiting the Rams to 162 offensive yards (their lowest total in 34 games since 2017).

First it was Barriere, then Kelley

Eric Barriere and Cole Kelley wowed once again in leading the top-scoring offenses in the FCS. Eastern Washington’s Barriere was unstoppable in a 71-21 rout of Idaho, throwing for a career-high 600 yards – which tied for the eighth-most ever by an FCS quarterback – and matching his career best with seven touchdown passes while adding an eighth on the ground. Going 26 of 35, he averaged over 23 yards per completion, with three receivers finishing with over 100 yards – wide receivers Freddie Roberson (nine receptions, 192 yards, two touchdowns) and Andrew Boston (5-175-1) and running back Dennis Merritt (3-102-1). As expected, Southeastern Louisiana’s Kelley answered right back, passing for 398 yards and five TDs in a 61-24 rout of Houston Baptist. The reigning Walter Payton Award winner found 13 different receivers while going 31 of 38, which put him over a 73 completion percentage for the ninth straight game.

One week after South Dakota State and James Madison both fell by one point as the nation’s No. 2- and 3-ranked teams, respectively, they bounced back on the road doing what they do best. SDSU (5-1, 2-1 MVFC) let running back Pierre Strong Jr. (122 yards, two touchdowns) find the end zone as it pulled away from Western Illinois 41-17, and James Madison (5-1, 3-1) posted six sacks and limited Richmond to 188 yards in a 19-3 victory, keeping an opponent under 200 yards for the fourth time this season. James Madison, the 2016 FCS champ, has reached at least the national semifinals in four of the last five seasons, and South Dakota State has advance at least that far in three of the past four seasons.

The race in the Southern Conference is every bit as good as expected. Off to 3-0 starts in conference, No. 10 ETSU and Mercer were knocked off, and now five teams are separated by a half game in the standings, each with just one loss. Chattanooga (3-3, 2-1) kept ETSU from reaching 7-0 for the first time, with Devonnsha Maxwell recording a school-record 4.5 sacks and running back Tyrell Price and Ailym Ford combining for 193 yards and three touchdowns on the ground. VMI (5-2, 3-1), the defending champ, mauled Mercer 45-7 on the road, getting a pick-six from Alex Oliver on the game’s first play and then settling in behind running backs Rashad Raymond (163 yards, TD) and Hunter Rice (112, 3). Furman (4-2, 2-1) is the other one-loss team in conference.

In a weekend of impressive numbers, Jackson State basically had the biggest by attracting an FCS season-high 53,578 fans to Mississippi Veterans Memorial Stadium for its 28-7 win over Alabama State. The Tigers (5-1, 3-0), under Deion Sanders, er, Coach Prime, are off to their best start in 10 years, and have already beaten the only team (Florida A&M) within one game of them in the SWAC East standings. Sanders’ freshman son Shedeur passed for two TDs before the largest Homecoming crowd in school history, giving him 13 against just one interception this season.

Quite the burgeoning series

Eastern Kentucky posted its biggest comeback win in nearly 10 years by overcoming a 22-point, third-quarter deficit (35-13) at Central Arkansas, scoring the final 25 points for a 38-35 triumph in the AQ7. Quarterback Parker McKinney, who had two touchdown passes, put the Colonels (5-2, 2-0) ahead for the first time on a 40-yard run midway through the fourth quarter. The two schools have faced each other three times in just under a year after having never met previously, and each time the winning team trailed in the fourth quarter. They’ll continue to square off in the next ASUN football league next season.

The longest run of the FCS season lasted all of one hour. Marques DeShields set the Saint Francis record with a 98-yard touchdown run against Bryant. Stony Brook’s Ty Son Lawton then punched No. 14 Delaware right in the gut, going up the middle for a 99-yard TD dash. That had been done 13 times previously in the FCS, most recently by James Madison’s Jawon Hamilton against VMI in the first round of the spring playoffs on April 24. Furman’s Dominic Roberto (90) and Northern Arizona’s Kevin Daniels (89) later added the third- and fourth-longest carries of the season.

Sacred Heart has one of the leading rushers in the FCS, it’s just not Julius Chestnut. Junior Malik Grant has stepped in admirably since the spring national rushing champ and third-place finisher for the Walter Payton Award was lost to a lower-leg injury in the fall opener. Grant gained 183 rushing yards and a career-best three touchdowns in a 27-17 rally past Central Connecticut State, which gives him 824 yards in six starts and a national-high 853 for the season. The 5-foot-7 Grant just needed more of a chance with the defending Northeast Conference champ (4-3, 2-1), as he had 52 carries for 171 yards entering the season.

It’s not as though the St. Thomas Tommies are crossing the state line and beating up North Dakota State, but the FCS newcomers up from Division III have a 4-2 record, including 3-1 in the Pioneer Football League after pounding Stetson 38-7 in their first trip from St. Paul, Minnesota, to Florida in over 73 years. Sophomore running back Hope Adebayo was so thrilled to get his first collegiate start that he rushed for a 78-yard touchdown on the game’s first play from scrimmage, and he went on to amass 182 yards and four scores. The defense racked up six sacks and three intercepions.