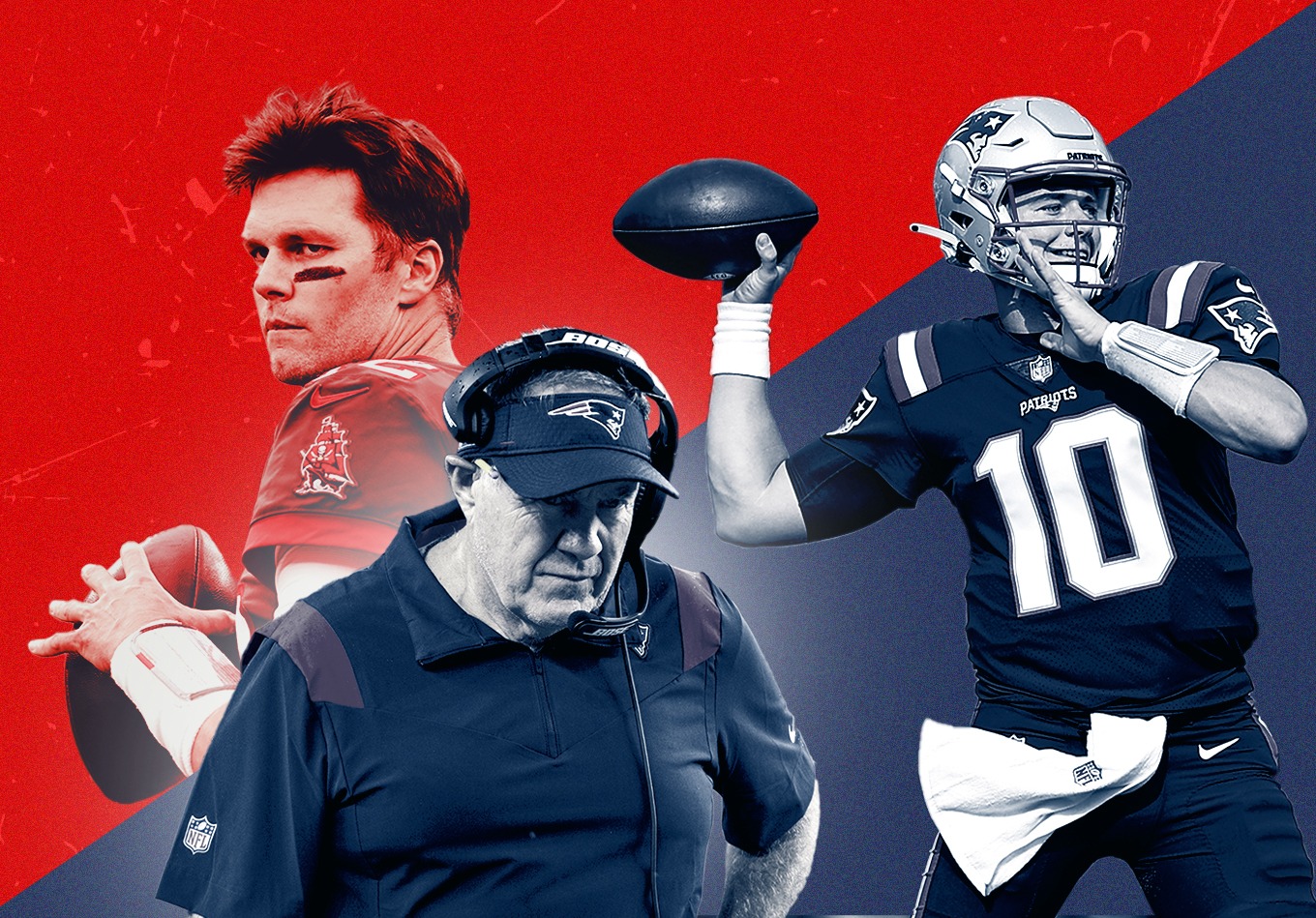 Is Mac Jones on Track to Be Brady’s Long-Term Successor?

In the ranking of cast and characters as Tom Brady makes his return to Foxborough, Jones might struggle to be considered a supporting actor. However, the timing of the showdown provides an opportunity to ask: Does he have what it takes to be the long-term successor in New England?

There probably won’t be too much focus on Mac Jones come Sunday night at Gillette Stadium.

In the ranking of cast and characters as Tom Brady makes his return to Foxborough after 20 seasons and six Super Bowl rings with New England and having added another in his first year away from the Patriots, Jones might struggle to even be considered a supporting actor.

Indeed, the dominant narrative as Brady brings the defending champion Tampa Bay Buccaneers to the place where he built a legend that stands above all others in the NFL will be one of quarterback versus former coach.

This is a chance for Brady to get one over on Bill Belichick and, for many, to prove that he was the chief reason for the two decades’ worth of success the Patriots enjoyed. In a landscape where hot takes rule over balance and nuanced conversation, the most obvious explanation that New England’s dominance was a product of a quite beautiful marriage between the greatest quarterback and greatest coach of all time is drowned out.

Talk of Brady claiming a narrative-winning triumph over Belichick ignores the fact that the deck is firmly stacked against New England. In almost every area, the Patriots enter this one shorthanded compared to their opponents and the reality is the Bucs should win handily regardless of who is coaching the opponent.

But for most this is a game in which that narrative trumps analysis and, with Brady almost certain to break Drew Brees’ record for all-time passing yards at the home of his former team, little importance is likely to be assigned to the Patriots’ first-round pick and how he performs with a team ill-equipped to topple the Bucs.

Yet in terms of the long-term outlook, that is the most important aspect of Sunday’s game for New England. Belichick will not care about Brady breaking records. His focus will be on how Jones meets the challenge of facing the team that entered the season as the class of the NFL.

Coincidentally, that test comes three days after the 20th anniversary of Brady’s first start for the Patriots in 2001, a season in which he improbably led New England to Super Bowl glory. The NFL has changed so much in those two decades that a direct comparison between Brady’s first games as a starting quarterback and those of Jones is difficult to make.

However, the timing of the most challenging and most significant game of Jones’ career to this point provides an opportunity to answer the question: Is he on track to be the long-term successor to Brady?

Having used the 15th overall pick on Jones, the Patriots will hope the answer is an emphatic yes.

On the surface, the difference in his numbers from his opening three games and those from Brady across the same limited sample size provides reason for encouragement.

Yet Jones’ advantage in those raw numbers is more than likely a reflection of a modern NFL that is far more hospitable to the passing game than it was in 2001.

And in the one area where Jones and the young Brady could be considered comparable, it is the latter who has the edge. While Brady did not throw an interception in his first three starts, Jones has already thrown three.

They all came in last week’s loss to the New Orleans Saints, a performance that lent credence to the argument that, while Jones has arguably been the most composed of the rookie quarterbacks to start a game this season, his poise and decision-making is not on the same level as Brady’s was back in 2001.

Jones cannot be considered at fault for all those picks. He certainly takes some share of the blame for the first. Jones stepped up into the arms of Kaden Elliss, who hit him as he delivered the ball, producing a wobbly pass that landed in the grateful arms of P.J. Williams.

The second, which was returned for a touchdown by Malcolm Jenkins, saw a well-thrown ball bounce off the hands of Jonnu Smith, while the third appeared to be the product of a miscommunication with Nelson Agholor as the throw went behind the receiver with the game well out of hand.

Only the first interception could potentially be ascribed to Jones and poor decision-making in the pocket, but the numbers offer an insight into when his turnover-worthy plays are coming and provide some cause for concern.

Jones has thrown a pickable pass on 2.56% of his attempts, putting him the right side of the league-wide average of 3.13%. The modern-day Brady, a seemingly ageless behemoth content to see how close to 50 he can continue playing, has thrown an interceptable pass 1.49% of the time.

The statistics indicate that Jones has been unperturbed by pressure. He has thrown three pickable passes in total this season, but none have come when under duress. Instead, they have all been thrown from a clean pocket.

Only two other quarterbacks, Dak Prescott (4) and Zach Wilson (6) have thrown more interceptable passes from a clean pocket. Brady has thrown one, with his other pickable pass coming under pressure.

The split speaks to Jones’ composure under pressure, but also raises doubts about his overall decision-making when he has the chance to properly scan the field, and further potential issues become apparent when looking at the Patriots’ quarterback under pressure versus when he has time.

Criticism of Jones to this point in his NFL career has surrounded an apparent inability to push the ball downfield. However, his air yards per attempt (8.24) is actually slightly superior to that of Brady (8.13).

But when he has the opportunity to assess his options, Jones eschews the more aggressive throws. His air yards per attempt average from a clean pocket is 7.38, only just above the average of 7.28 and below Brady’s 8.13.

It is when he is pressured that Jones appears more comfortable going deep. With the time to think taken away, Jones’ air yards average is 10.03, again above the average 9.97, but on the lower end of the scale.

Delivering a well-thrown ball 81.6% of the time under pressure, Jones stands above Brady’s 78.8 as tied for the third most accurate quarterback under duress.

It is his overall accuracy that gives the Patriots their primary cause for optimism with Jones. His well-thrown percentage of 80.3 is above the 78.9% average, though below Brady’s 82.1, and Smith’s drop that turned into an interception was illustrative of the lack of help he has received from his pass-catchers despite heavy investment from New England this offseason.

Receivers Agholor (66.7), Kendrick Bourne (57.1) and Jakobi Meyers (72.4) are all below the average for open percentage on plays where they are targeted among wideouts with at least five targets, speaking to a lack of separation from New England’s receiving weapons.

Jones might not be getting the best of assistance, but a blend of questionable decision-making and lack of aggressiveness from a clean pocket is not a winning strategy in today’s NFL. It is also not a combination Brady could be accused of ever possessing during his career, even if he did average fewer than 7.0 yards per attempt across his first three seasons as a starter.

Stepping into Brady’s shoes after Cam Newton’s failed bid to become the successor was always going to be a tall ask for a rookie, so it is important not to make definitive judgements on a player whose NFL career is still firmly in its infancy.

But the early signs for Jones are mixed and if he is to snatch some of the limelight in primetime, he will need to do a better job of taking advantage of protection and making the right reads and, in the process, keep the man who has built the NFL’s greatest resume off the field for as long as possible.