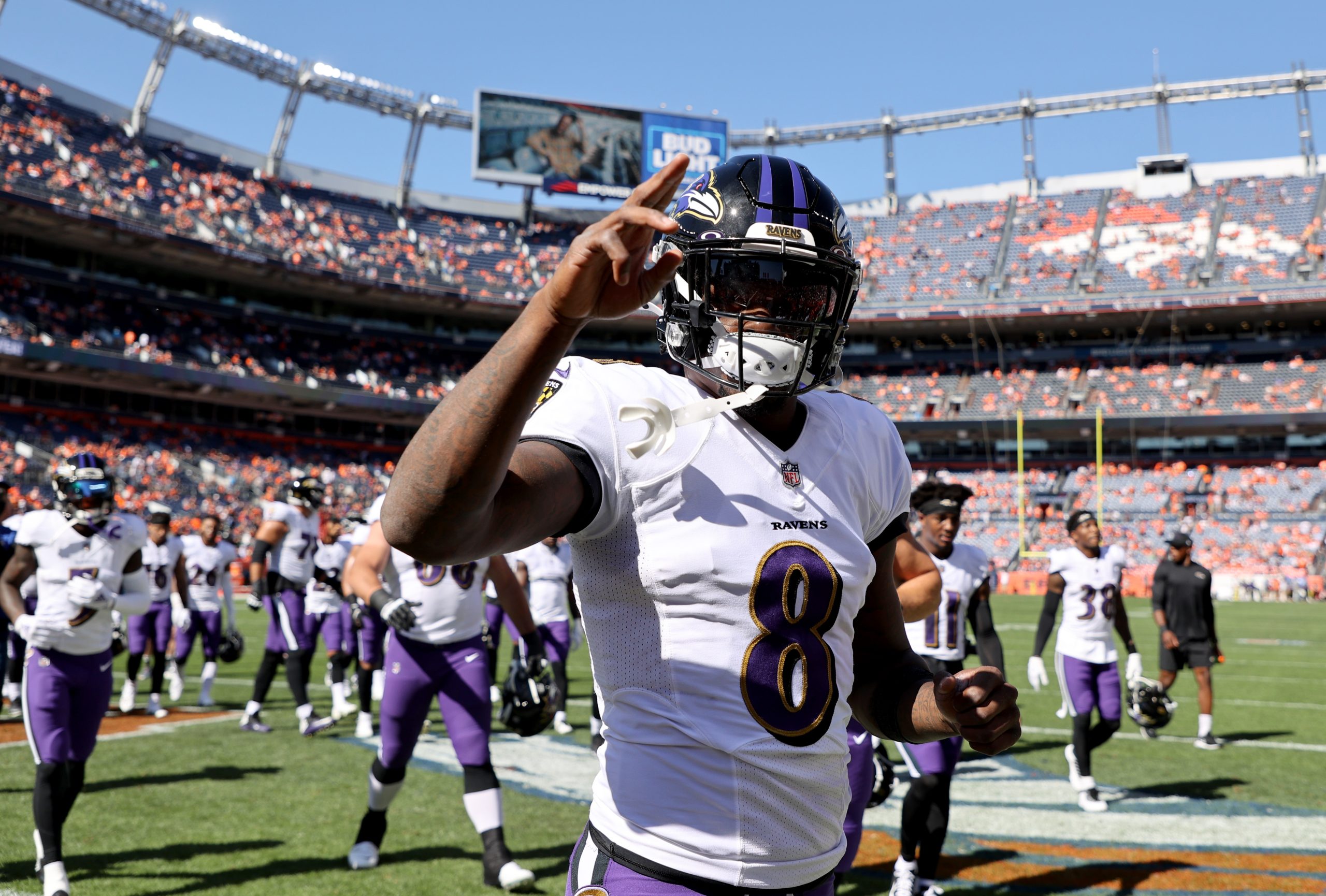 Nickel Coverage: The Consistently Inconsistent Ravens are Emerging as an AFC Threat

Baltimore Ravens wide receiver Marquise Brown made one of the most visually spectacular plays of Week 4 in the NFL. Watching a second-quarter moonball from Lamar Jackson threaten to fly out of his reach, Brown dove to reel in a stunning catch in the back of the endzone for a 49-yard touchdown and a 14-7 lead over the Denver Broncos that they would not relinquish.

It was a play that typified what the 3-1 Ravens have been in 2021: It was a catch that came from a wide receiver who dropped two passes on potentially big plays in Baltimore’s narrow Week 3 win over the Detroit Lions. Stone hands one week, expert ball tracker the next. As for the team as a whole, the Ravens were brilliant in overturning an 11-point deficit to stun the Kansas City Chiefs in Week 2, then unconvincing and undoubtedly fortunate in needing a record-breaking field goal to beat the winless Lions. They are consistently inconsistent.

The historic aspect of their 23-7 win over the Denver Broncos provided a further illustration of this. With a five-yard carry from Lamar Jackson on the final play of the game, the Ravens tied the NFL record for the most consecutive 100-yard team rushing performances with 43. They did so while averaging only 3.4 yards per carry. An inconsistent performance from a usually consistent rushing attack, and an achievement entirely in keeping with their identity under John Harbaugh.

Yet, with a Week 1 overtime loss to the Las Vegas Raiders firmly in the rearview mirror, the Ravens are again doing what has typically come natural to them during Harbaugh’s tenure: winning.

They are doing so while failing to put together a complete performance through four weeks of the season. The victory in Denver was perhaps the closest they have come to such a display, and the fact the Ravens now stand atop the AFC North without truly clicking as a team should strike fear into a conference they have the talent to win.

Lamar not Limited by Inaccuracy

In terms of accuracy, Jackson is the picture of inconsistency.

Through the first four games of the season, Jackson’s 74.1 well-thrown percentage ranks 27th among quarterbacks after Sunday’s games. However, what he continues to do with reliability is deliver the explosive plays on which NFL games often hinge.

Jackson leads the league in air yards per attempt with 12.21 and is third in the NFL in completions of 20 yards or more, his 19 trailing only Tom Brady (23) and Derek Carr (21) prior to the Raiders’ Monday Night Football clash with the Los Angeles Chargers. He is also third with 12 passing plays of 25 yards or more, putting him easily on pace to surpass the 25 he produced last season.

More impressively, he is having success attacking downfield while generally avoiding turnover-worthy throws. Jackson has been intercepted three times this season, yet he is only credited with two pickable passes on 116 attempts, and his pickable pass rate of 1.72% is eighth best among quarterbacks with a minimum of 20 attempts. What does that say about Jackson? Perhaps that through four games he’s been a quarterback who has taken care of the ball fairly well but has been comprehensively punished for his poorer throws.

Averaging 6.64 yards per carry, Jackson’s abilities as a runner have played a critical role in the Ravens’ ground game continuing to excel despite a rash of preseason injuries in the backfield. His eight runs of 10 yards or more are tied for the fifth most in the league.

But, in the modern NFL, the passing game is king, and it is Jackson’s apparently improving rapport with a group of pass-catchers showing promising signs of progress that is fueling a surge in the Ravens’ production through the air.

The Ravens finished the 2020 season in the top 10 in yards per passing play with 6.25. In 2021, they are seventh with 7.57. The Chiefs, the Raiders and the Cincinnati Bengals are the only AFC teams above them on the list.

Standing out as a primary reason for this improvement are the strides made by Baltimore’s receiving weapons, with Brown chief among them. Producing a burn on 71.4% of his targets, Brown is blossoming from pure speedster into a No. 1 receiver with the upside to flip the field in an instant.

His 18.3 burn yards per target ranks second among receivers with at least 10 targets, while Brown’s burn yards per route average of 6.1 is seventh. Put into the context of Brown having the seventh-highest average depth of target (16.4 yards) of such wideouts, those numbers are even more admirable.

Brown is getting crucial separation while running longer routes – on which it’s typically more difficult to escape from defenders – and his big-play percentage of 48.2, which is third among receivers with 10 targets. His explosiveness has been critical to the Ravens’ improved passing game efficiency.

Meanwhile, tight end Mark Andrews remains an excellent complement to Brown. His 84% burn rate leads tight ends with at least 10 targets and is second among that group in burn yards per target (14) and third in burn yards per route (4.2).

The efforts of Brown and Andrews have arguably turned the pass-catchers into the most consistent element of the team, with that duo supported by the increasing contributions of Devin Duvernay and James Proche.

And it may soon get even better. Rookie first-rounder Rashod Bateman is back practicing after being activated from injured reserve following a groin injury, and Baltimore will look for Bateman to replicate the impact that saw him finish fourth among Power 5 receivers with at least 25 targets in his last full college season in 2019 with a big-play percentage of 50.4.

That will be a challenge to replicate at the highest level, but on the surface the Ravens are set to add more potency to help the offense potentially provide further support to a defense of which the numbers paint a fittingly mixed picture.

The Ravens’ defense ranks 16th in opponent yards per pass play allowed (6.62) and 14th in opponent rushing average (4.13). In other words, up and down, middle of the pack, inconsistent. You get the theme by this point.

But after allowing the Lions to average only 4.8 yards per play in Week 3, the Ravens restricted the Broncos to 4.3 in Week 4. Indeed, this is a defense with an intriguing blend of youth and experience that appears to be rounding into form.

The Ravens managed 15 pressures of Broncos quarterbacks – 10 fewer than they recorded against the Raiders – but you would be forgiven for thinking they produced double that number. Save for a drive that ended in a three-yard touchdown for Broncos tight end Noah Fant in the second quarter, Baltimore’s defense dictated play, registering five sacks.

The Ravens have tallied 23 opponent negative plays for minus-111 yards. That’s tied for the sixth-highest negative yardage for opponents produced by a defense this season.

Up front, the development of defensive tackle Justin Madubuike and edges Tyus Bowser and Odafe Oweh has been key, with the trio undoubtedly benefiting from the veteran influences of Calais Campbell and Justin Houston. All-Pro Marlon Humphrey is leading the way for a secondary managing to survive the loss of cornerback Marcus Peters to a season-ending injury.

The progress of recent weeks can partially be attributed to going from facing the Raiders and Chiefs – each in the top 10 in yards per play – to meeting with two offenses in the bottom half of the league in that category in the Broncos and Lions.

And, with the win over the Broncos the first the Ravens have claimed by double digits this season, talking up Baltimore as challengers to Kansas City and the Buffalo Bills in the AFC may seem premature at this point. However, the blend of explosive offense and an imperfect defense that has so far lived on creating negative plays is one that has delivered a Super Bowl title as recently as the 2019 season when the Chiefs lifted the Lombardi Trophy.

That formula is apparent for a Ravens team that has gone from staring at an 0-2 start to reeling off three straight wins without fully clicking. Though far from perfect, it’s a turnaround that should leave the rest of the AFC hoping Baltimore’s consistency never comes.