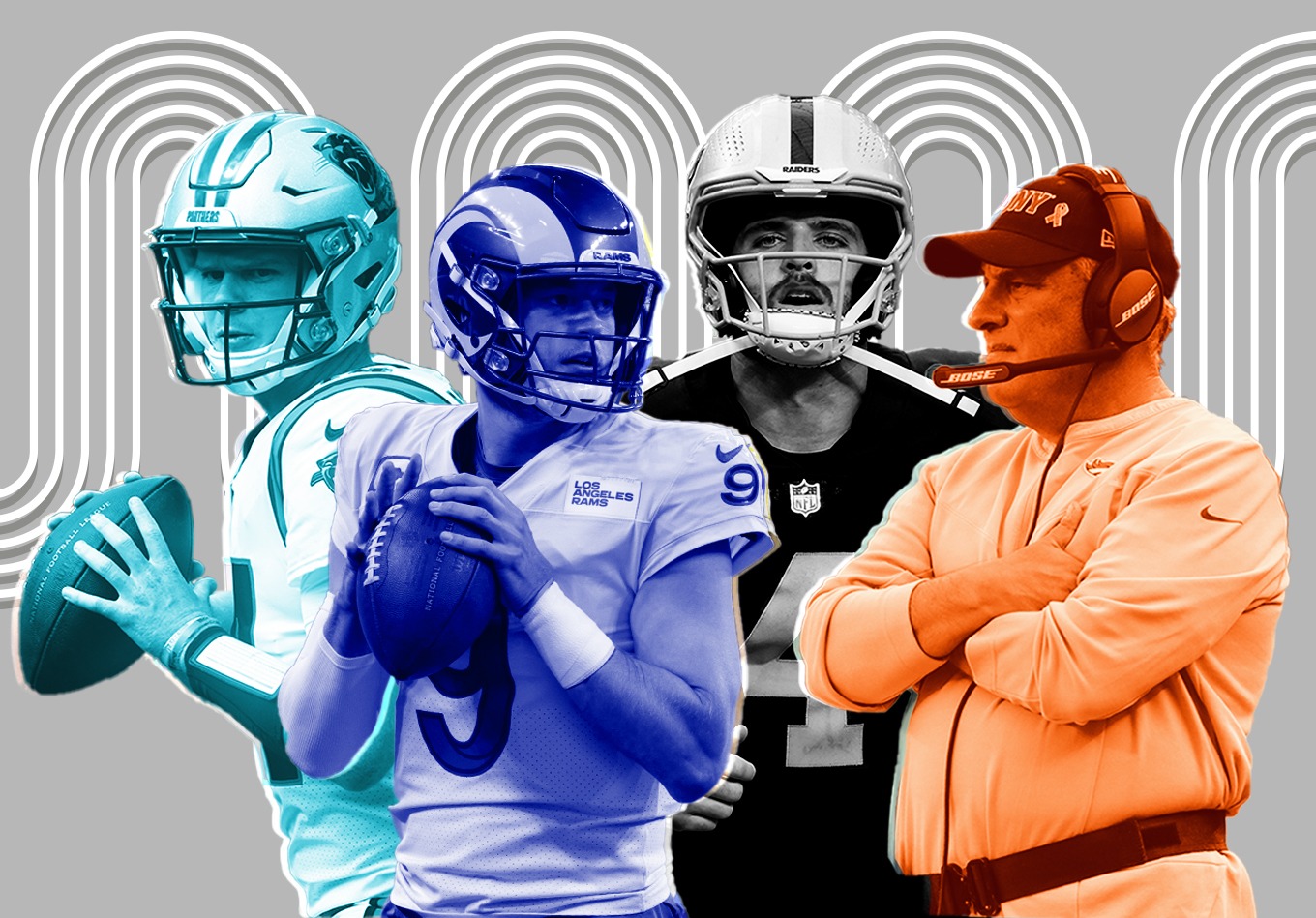 You might have heard by now that Tom Brady is coming back to New England this weekend, and he’s bringing Gronk and AB along with him.

Lost in the tsunami of hoopla surrounding the Mother of All Revenge Games, the Tampa Bay Buccaneers’ visit to Gillette Stadium that’s sure to boost the already massive ratings NBC is generating for its “Sunday Night Football” telecasts, is that the defending Super Bowl champions currently aren’t leading the NFC South as the 2021 season nears its (traditional) quarter mark.

For now, at least, that distinction is held by the upstart Carolina Panthers, one of five teams still unbeaten through the first three weeks. Two others, the Arizona Cardinals and Las Vegas Raiders, can be viewed as genuine surprises as well, while another (Denver) is still seeking a measure of validation for its 3-0 start after feasting on a cookie-dough soft slate of opponents thus far.

The Broncos, a team we tabbed as a potential AFC sleeper heading into the season, will get that chance to justify those claims when the formidable Baltimore Ravens descend upon the Mile High City for one of our feature matchups of Week 4.

Stern challenges figure to await both the Panthers and Raiders as well. Carolina faces a seemingly daunting task as it heads to Dallas to take on the rejuvenated Cowboys without offensive lynchpin Christian McCaffrey, while Las Vegas draws a tough assignment of its own with a Monday night road date with a confident Los Angeles Chargers team fresh off an impressive win in Kansas City.

And let’s not forget the other game taking place in palatial SoFi Stadium, where the Cardinals will pit their juggernaut offense up against the seemingly bulletproof Los Angeles Rams in the week’s lone clash of unbeatens. With the over/under now raised to 55, this early-season NFC West showdown should be a must-watch for those who crave high-scoring, back-and-forth affairs.

So, which of the league’s unbeatens will still be left standing after the first weekend of October? Here’s our inside take on how these four games may play out.

It’s hard to find a power rankings list that doesn’t have the Rams sitting at the top following last week’s statement-making 34-24 win over the Buccaneers. The Matthew Stafford-led offense leads the NFL in scoring efficiency, producing points on 58.6% (17-of-29) of its drives thus far, and Los Angeles is one of four teams yet to allow a first-quarter point thus far (the Bills, Panthers and believe it or not, the Giants, are the others).

Brady and Tampa Bay’s accomplished cast of playmakers couldn’t keep pace with the Rams’ enviable blend of precision and big-play ability. Is there any reason to believe the Cardinals can?

The only team to have scored at least 31 points in all three games this season, Arizona may have the most diverse passing attack in league history as the first team to have six players with 10 or more receptions through three games. The Cardinals also have the NFL’s most accurate quarterback by our metrics, as Kyler Murray’s well-thrown percentage of 85.6 tops all players with at least 50 pass attempts this season. The 2019 No. 1 overall pick has also been deadly against the blitz, recording a league-best 152.6 passer rating with three touchdowns in those situations.

Arizona has generated touchdowns on 34.3% of its drives, tied for the third-highest rate in the NFL, so it’s well-equipped to handle a possible shootout. The Rams rank second in that category at 37.9%, so such a scenario could very well unfold.

If there’s one area the Rams may have a notable edge, it’s in the turnover department. Murray’s pickable pass percentage of 4.12 ranks 24th of 33 qualified QBs (min. 40 pass att.), which could spell the difference in what should be a close and entertaining contest.

Sure, Sam Darnold has so far thrived out of the pressure cooker that is New York, but a fast and aggressive defense has been the biggest reason why the Panthers are already more than halfway towards reaching their win total in each of the last two seasons. Carolina’s 573 total yards allowed is the fewest by any team through three games of a season since 2008, when the Ravens yielded 560 en route to an 11-5 campaign capped by an AFC Championship Game appearance.

The Panthers have also been the beneficiaries of some good fortune, however. They’ve faced a rookie quarterback making his first NFL start in two of those three wins, and the other came against a discombobulated Saints team playing without a slew of assistant coaches due to a COVID-19 outbreak.

That streak of good luck may have run out in Week 3, when Carolina lost McCaffrey and impressive rookie cornerback Jaycee Horn to multi-week injuries in a methodical victory over the talent-deficient Houston Texans.

Having registered a rushing attempt, reception or target on a hefty 42.1% of the Panthers’ offensive plays at the time he bowed out with a hamstring injury, McCaffrey’s absence will unquestionably alter the ball-control game plan of an offense that ranks second in the NFL in time of possession. Still, it can be argued that Horn looms as an even greater loss leading into an already trying matchup against Dak Prescott and a locked-in Dallas offense.

Buoyed by a fully healed ankle and a giant new contract, Prescott has made a strong early case for Comeback Player of the Year – and perhaps something greater – with a sensational stretch in which he’s joined Drew Brees (2018) as the only player in the Super Bowl era to complete over 77.0% of his passes with 100 or more attempts through a season’s first three games. His well-thrown percentage of 85.5% trails only Murray for tops in the league (min. 50 attempts), and he’s spread the ball around with wideouts Amari Cooper and CeeDee Lamb and tight end Dalton Schultz each having a game with at least six catches. To say he’s a more difficult test for Carolina’s now shorthanded secondary than Zach Wilson, Davis Mills or the bad version of Jameis Winston is a criminal understatement.

Darnold has more than held his own during his brief time as the Panthers’ starting quarterback, but he’s also yet to be put in a situation where he must carry a team. Carolina is the only team yet to trail at any point this season.

That may change Sunday.

With wins over the Giants, Jaguars and Jets – teams that are a combined 0-10 – it’s understandable that there isn’t an army of believers that the Broncos have turned a corner after four consecutive seasons of mediocre to poor results. But there’s enough early indicators to suggest that Denver may have finally found the right formula for its first real success of the post-Peyton Manning era. The Broncos play lock-down defense, they don’t beat themselves with mistakes and the offense, with the ultra-efficient Teddy Bridgewater backed by a solid running game and sound offensive line, may be better than most think.

It’s also hard to decipher what to make of Baltimore thus far. The optimist says the Ravens would be one of these 3-0 teams we’re highlighting if not for some Derek Carr late-game magic in Week 1. The glass-half-empty person counters that they needed a historic Justin Tucker field goal to beat the downtrodden Lions and avoid a 1-2 start. The optimist then points out that Detroit has been quite competitive in its three games, all against quality opponents.

Whatever your take on the Ravens, everyone can agree this will be Denver’s toughest foe to date, and quite possibly the type of team that can give the Broncos a real headache.

The Broncos have been the league’s best at defending the pass this season, and it’s not especially close. They’ve held enemy quarterbacks to a 57.8 passer rating, a 52.4 percent completion rate and an average of 5.2 yards per attempt – all best in the NFL. But Vic Fangio defenses have generally always been adept in that area; stopping the run is usually the Achilles’ heel. A look back at least season proves this point, as Denver went 1-5 when allowing 130 rushing yards or more. And the one win was a miracle 31-30 victory over the Chargers that came on a last-second touchdown set up by a defensive pass interference call on fourth down.

Including the postseason, Lamar Jackson has made 44 career NFL starts. The Ravens have rushed for over 130 yards in 37 of those games, or 84.1 percent of the time.

Jackson’s missed practice time this week with a back issue, however, and could very well be limited in his mobility. And Bridgewater has been the better quarterback in the early going anyway. The unheralded veteran has three straight turnover-free games with at least 230 passing yards and a 75% completion rate, becoming the fourth quarterback in the last 30 years with such a streak. The other three are named Rodgers, Brees and Peyton Manning.

As our win probability suggests, this one could go either way. The Ravens have already had their share of frantic finishes. This has the makings of another.

Are the Raiders finally for real in year four of the second Jon Gruden regime? Well, three straight wins over teams that posted double-digit victory totals in 2020 is impressive, though the Steelers and Dolphins appear to have taken steps back. And they’re coming up aces in close games thanks to some truly elite play from Derek Carr, who can become the first quarterback in the Super Bowl era to start a season with four straight outings of 375-plus passing yards and at least two touchdown passes.

The Chargers seem to have some credentials as well, with a last-second field goal by Dallas’ Greg Zuerlein in Week 2 keeping them from joining the list of early-season unbeatens. Sure, the Chiefs pulled a rare self-destruct job last week, but any win in Kansas City still carries weight regardless of the circumstances.

While Las Vegas’ defense has been considerably tighter than its sordid 2020 version – especially against the pass – it’s about to face its greatest challenge of the young season from rising star Justin Herbert and the Chargers’ stellar receiving duo of Keenan Allen and Mike Williams, the league’s lone combo with at least 20 catches and 250 receiving yards through three games. The Chargers have had issues converting in the red zone early on, but they scored touchdowns in four of five trips against the Chiefs and face a Raiders team that’s yet to prevent a TD in four red-zone situations this season.

The Raiders’ greatest strength may be their resiliency, as they’ve overcome early 14-0 deficits to win twice already this season. Carr has been a big reason for both those slow starts and fast finishes, as he’s recorded a pedestrian 77.5 passer rating in the first half of games and a terrific 123.3 rating in the second half and overtime.

Largest Improvement in Passer Rating First Half to Second Half/OT

This one may be worth staying up late for, as it’s got all the makings of a game where whoever has the ball last wins. The Raiders have trailed in the fourth quarter in all three of their victories, while the Chargers have entered the fourth with a deficit in each of their two wins. It easy to envision how this one could go against the win probability that leans in LA’s favor.