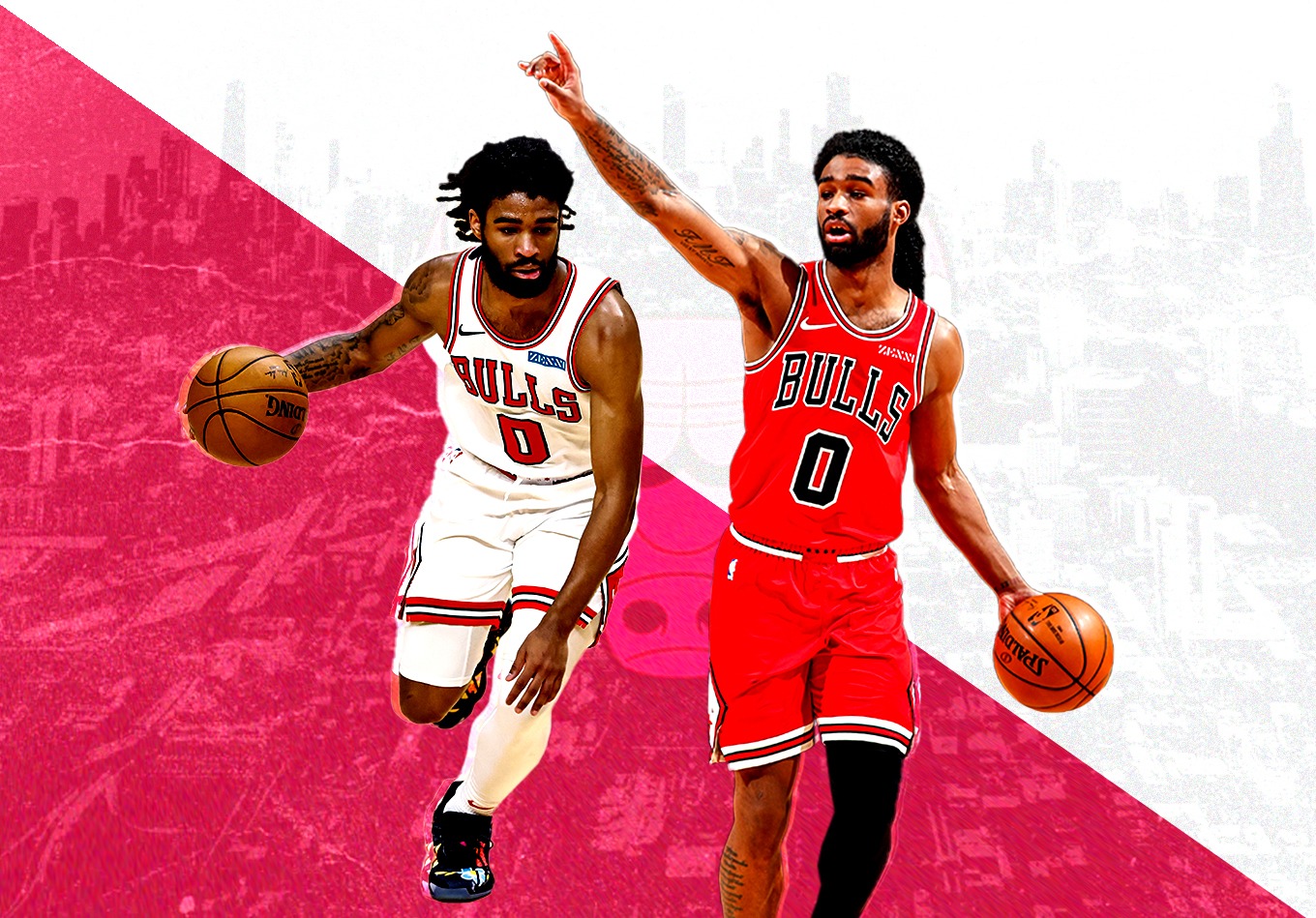 Point Taken: Why Coby White Could Shine in His New Role With the Remade Bulls

Only two holdovers remain from the Chicago Bulls team that Executive Vice President of Basketball Operations Arturas Karnisovas inherited upon his hiring on April 13, 2020.

Of course, franchise pillar Zach LaVine is in town. Over the past six months, Karnisovas and Co. have rebuilt the roster to convey a commitment of winning to the All-Star guard and maximize his rising prime. And then, alongside LaVine, is 21-year-old Coby White, entering his third NBA season without much more clarity than his rookie debut two years ago.

Due to surgery on his left shoulder back in June, White’s 2021-22 premiere will be delayed by a few weeks, though the Bulls announced last week it’s “anticipated” he’ll make a full recovery in November. When he does, he’ll join a squad with the most infrastructure conducive to his success that he’s encountered across three seasons.

Versatile All-Star center Nikola Vucevic is slated for his first full season after being acquired shortly before the trade deadline in March. Two-way playmaker and budding shooter Lonzo Ball inked a four-year, $85 million deal this summer. As part of a sign-and-trade with the San Antonio Spurs, DeMar DeRozan traded his Southwestern digs for Midwestern ones, bringing skillful slashing and passing to Chicago. 3-and-D guard Alex Caruso bounced from Los Angeles to become a Bull, cemented by a four-year, $37 million contract.

Not only is this team significantly more talented than six and a half months ago, but it’s also curated to help provide stability for White and provide him distinct responsibilities in what projects as a paramount season for him to establish NBA footing.

That’s not to say these moves were engineered specifically with him in mind. They’re almost assuredly a ripple effect from the broad aim of constructing a winner. But a roster better designed for the seventh overall pick of two years ago to locate a defined role could conceivably help progress that intention of playoff basketball in the Windy City.

During White’s first two seasons, the Bulls have tried to balance the development of his on- and off-ball offense, and justifiably so. He was the seventh overall pick in 2019. Any smart franchise would gauge the tenability of an offensively inclined guard’s creation equity. But it hasn’t panned out.

Despite some alluring pull-up flashes, White hasn’t met the requisite decision-making threshold to earn on-ball touches and further refine the pull-up game. He doesn’t appear close to reaching that benchmark either (yet?).

His handle is too shaky and enables defenders to constantly prod at it to the point of turnovers. In ball-screens and creation attempts, his high, loose dribble forces him to abandon many pursuits. He doesn’t think through the ramifications of a decision or act based on how the defense is configured.

Too often, possessions with him as a conductor feel frenzied – as they naturally might for someone of his age thrust into that gig. He’ll latch onto a certain choice and proceed without checking to see if it aligns with reality. In a word, he is premeditated, and it corners him into precarious situations.

If Chicago was still orienting itself toward youth development, another season allocating ball-handling reps to White would be logical. This team wants to win, snap its four-year playoff drought and convince LaVine to re-sign next summer, though. Enduring another campaign of White’s tenuous education as an initiator runs counter to those priorities.

This isn’t a dilemma. He should slot in as an off-ball scorer whose decision-making tree is narrow; both he and the team benefit from this shift. Previously, the surrounding personnel didn’t invite that dynamic. Now, with LaVine no longer the only “trusty” on-ball creator (apologies, Tomas Satoransky), White has a chance for suitable tasks.

LaVine, Vucevic and DeRozan can all serve as the nucleus on a given possession. LaVine is this team’s primary handler, but all three will rotate to commandeer the offense. During White’s first two years, he sometimes spearheaded the action to let LaVine cook off the ball, where he’s both a menacing cutter and capable movement shooter.

White doesn’t have to be the one who scales up when Chicago wishes to deploy its star scorer in that manner anymore. Off-ball LaVine doesn’t have to potentially come at the expense of the offense or White individually. DeRozan can replace him there. Vucevic is also an offensive hub from the elbows and post. The Bulls can diversify their offense, while still featuring LaVine, without needing to possibly jeopardize their success.

Similarly, the expansion of well-equipped offensive drivers should offer White a much grander off-ball role. Through two years, he’s netted 36.6% of his 576 catch-and-shoot triples. By no means is that some guaranteed harbinger of an elite future, but it’s adequate and a good baseline for someone of his age. Credence in a high-level shooting outcome can be justified.

The goal for him and Chicago is that clip nudges closer to 38 or 39% and includes some equitable versatility to invigorate the offense. Because beyond LaVine – and, perhaps, Ball – this rotation doesn’t look rich with movement shooting. White might be able to offer that wrinkle.

His career 3-point rate is .490. Somewhere north of .600 next year is preferable. Fire away, fella. Where he levels out as a shooter long-term might drastically influence his utility in this context and the NBA broadly because consistent profits as a ball-handler feel quite murky.

So what might work? Deploy him as a short-roll release valve on the backside of LaVine-Vucevic pick-and-rolls or their varying advantage in general. Send him off flare screens. Utilize him as a screener and test the limits of his movement shooting. Scheme Chicago and Delay actions to leverage his potential pull-up gene and burst without necessitating he pilot the possession.

Beyond the spot-up shooting, it’s unclear whether White has the means to garner all this usage, but if he’s going to succeed offensively, off-ball sets to display his jumper seem like the most prudent investment.

White’s first two seasons have seen the Bulls ask him to be a creator and to manufacture efficient scoring chances for himself or others. He requires more structure than that. Affording him a vast set of options to navigate produces suboptimal results. This season should represent a change, transitioning from creator to scorer and attacker. Instructions can be simplified. The handling and playmaking burdens are predominantly reserved elsewhere.

However, that does not mean his only contributions must be derived beyond the arc. Pre-draft, one of his hallmark traits was speed. He’s shown the afterburners in the NBA, yet his handle has largely prevented his burst from functioning as a reliable tool to beat defenders. Off the ball, when he’s ideally operating against scattered defenses rather than static ones, as is the case on the ball, his quicks can accrue more relevance.

The theme of his usage doesn’t have to differ from the shooting blueprint. Encourage him to wield the threat of his jumper and puncture closeouts, while Chicago’s premier creators initially compromise defenders. Dial up screens. Promote the idea of off-ball randomness. Shooting will certainly be the headlining force behind his off-ball scoring, but it shouldn’t be the lone factor, given his jitterbug nature at 6-foot-5.

This revamped version of the Bulls appears as though it can offer White a much-improved context to flourish. How exactly they go about putting him in lineups to yield this success is a bit hazier.

His defensive limitations engender some disharmony between himself and the team’s offensive bedrocks, given each of their offensively slanted ethos. White is a very poor defender, especially at the point of attack. He’s routinely hung up on screens, lacks positional versatility because of his slender frame and 6-foot-5 wingspan, and doesn’t compensate with meaningful contributions on rotations or via event creation.

Both on and off the ball, LaVine is a better defender now than a few seasons before. Vucevic, while not a daunting rim protector, is typically positionally sound and an adequate deterrent. DeRozan is not particularly good in most facets. All three, nonetheless, ideally rank low on a defensive hierarchy. Adding White into the mix challenges that sentiment, even if it’s a sound concept offensively.

Fortunately, both Ball and Caruso could help buoy units defensively and Troy Brown Jr. is a rather useful reserve wing defensively. Head coach Billy Donovan embraced three-guard lineups in Oklahoma City two years ago. This Chicago roster is ripe for a similar tactic, with some tandem of Ball, Caruso, LaVine and White earning burn.

Two lineups that strike me as worthwhile to explore are White-Ball-LaVine-Brown-Vucevic and the same one with Caruso in place of Ball. Swapping Patrick Williams, who also might miss the start of the season (ankle), for Brown also suffices. Creation is imperative alongside White, but he and Chicago’s initiators warrant defensive insulation.

There will be some gaps in many of the Bulls’ quintets. Such is life when the talents of the three highest-paid players skew heavily toward offense. The hope is the offense overrides much of the wonkiness and defensive concern.

For White’s own chances of a breakthrough third season, it probably must be the case.