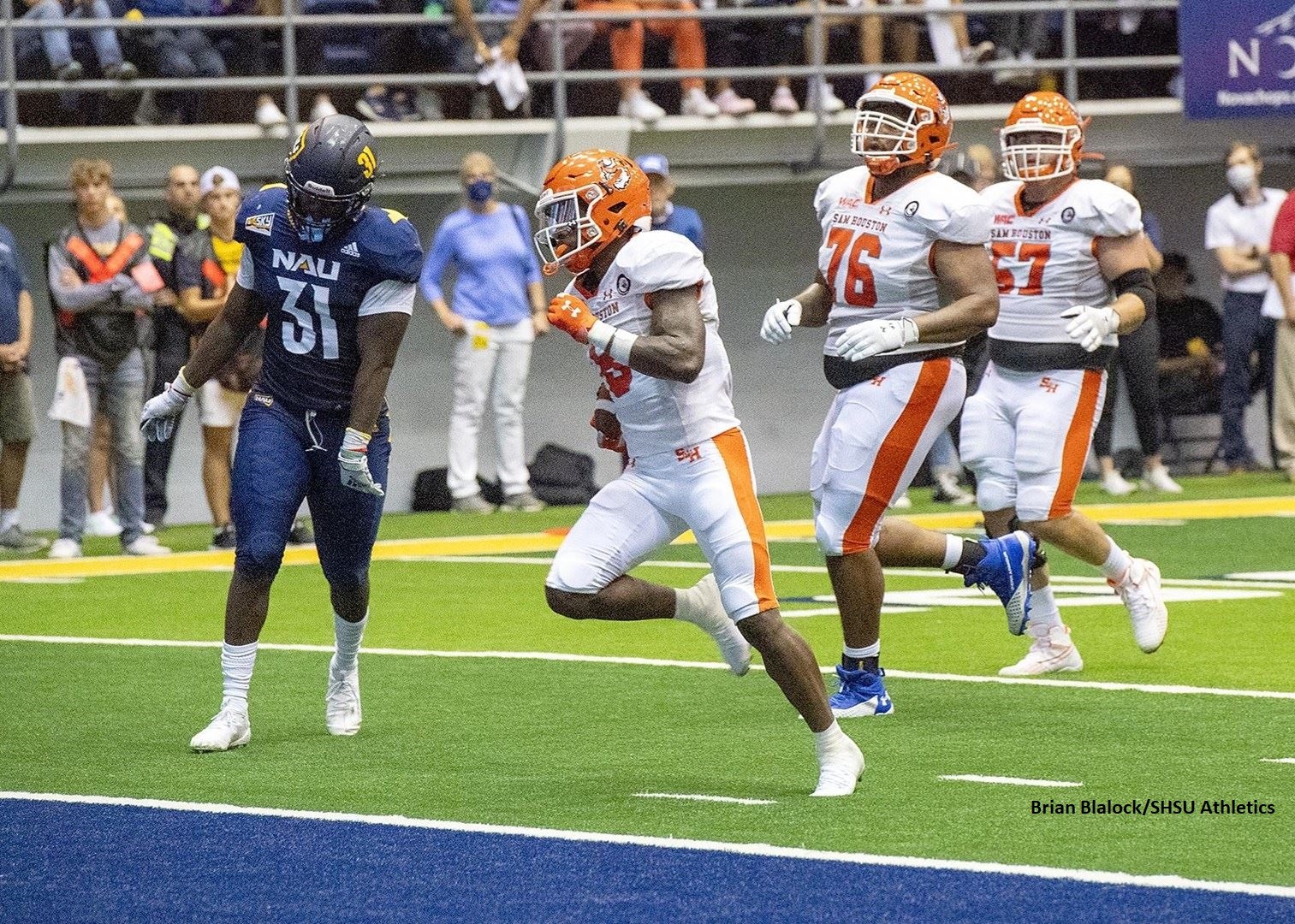 That North Dakota State’s dynasty program is ranked fifth in FCS college football says a lot about the strength of top teams this season.

Sam Houston, the defending FCS champion, has been No. 1 since the preseason Stats Perform FCS Top 25, but many agree South Dakota State, James Madison and North Dakota State – who also started in the top 5 – and Montana – which was ninth in the preseason – have made early season cases for the top spot as well. There’s almost no wrong and all right answers with the group, and the points drop from No. 5 to No. 6 (an equally impressive Eastern Washington) is the biggest between any consecutive spots in the poll.

Here’s a snapshot of the top-5 teams, which have combined for the last 10 FCS championships as well as five runner-up finishes in that time:

The No. 1 Case: The ease to how the reigning champ has put away two above-average opponents is notable (Northern Arizona has since beaten Arizona), and the Bearkats’ FCS-leading 13-game winning streak includes the sweep of North Dakota State, James Madison and South Dakota State in May. Running back Ramon Jefferson’s fast start (296 rushing yards, three touchdowns, 13.5 yards per carry) has helped provide offensive balance. The defense’s aggressive style (19 tackles for loss) immobilizes offenses.

If There is a Negative: Over 50 FCS teams have a completion percentage of at least 60, and the Bearkats aren’t one of them. It’s a level they haven’t finished above since 2016.

What’s Ahead: Sam Houston has an easy finishing stretch in the regular season, so a potential 10-0 mark will basically be determined prior to Halloween with Saturday’s trip to No. 25 Central Arkansas (the Bearkats are 2-5 in visits to Conway) and additional AQ7 games against rival Stephen F. Austin (Oct. 2) and Jacksonville State (Oct. 23).

The No. 1 Case: Coach John Stiegelmeier’s 25th season opened with a thorough win at a Power-5 conference opponent. The Jackrabbits haven’t had a turnover or allowed a sack, basically putting transfer quarterback Chris Oladokun (seven total touchdowns) off to an unstoppable start. Opponent scoring has occurred mostly in the fourth quarter with the games out of reach (20 of the 30 points allowed).

If There is a Negative: That the Jackrabbits entered the season with the FCS’ best running backs duo is vital because Isaiah Davis is expected to miss much of the remaining regular season with an upper-body/shoulder injury. The workload will increase for NFL Draft prospect Pierre Strong Jr.

If There is a Negative: There have been too many injuries among key players, so this week’s bye is helpful. All-America defensive end Mike Greene played for the first time last weekend, but All-America running back Percy Agyei-Obese (hamstring) and safety MJ Hampton (foot) have missed all three games, and cornerback Wesley McCormick (ankle) hasn’t even played a full half.

What’s Ahead: The rout of Maine has James Madison off to a winning start in the CAA. The heart of the conference schedule is a four-week stretch of road trips to New Hampshire (Oct. 2), Richmond (Oct. 16) and Delaware (Oct. 23) surrounding a home game versus Villanova (Oct. 9). All four teams are currently ranked in the Top 25.

The No. 1 Case: The “Dub” at UW (then No. 20) was the first by an FCS program over a nationally ranked FBS team in five years. The defense has nine sacks and six takeaways. Add in two spring games and the unit has allowed only two touchdowns and a 228.3-yard average over four games. Offensively, quarterback Cam Humphrey has spread the wealth between a bunch of running backs and wide receivers.

If There is a Negative: While the Montana history is exceptional, the Grizzlies are just returning to an elite level. They’re seeking their first Big Sky title since 2009, having lacked the kind of success that the other top-5 teams had during the 2010s decade.

What’s Ahead: The different feeling under coach Bobby Hauck suggests there won’t be hiccups in games that are sure wins. If so, the decisive games ahead are the Oct. 2 trip to Eastern Washington and the Nov. 20 regular-season finale versus archrival Montana State.

The No. 1 Case: The Bison have the best track record in the FCS, going 147-16 (.902) since the first of their record eight national championship seasons in 2011. They have pounded the opposition, ranking No. 1 nationally in rushing offense (348.3 yards per game), No. 2 in scoring defense (4.3 points per game) and No. 3 in total defense (196.7 ypg). The early season play of wide receiver Christian Watson and offensive tackle Cordell Volson has supported their status on the Senior Bowl watch list.

If There is a Negative: A poor nonconference strength of schedule, which ranks 102nd out of 128 FCS teams, according to the Massey Ratings, is a reason to argue against No. 1.

What’s Ahead: The Missouri Valley schedule is relentless, with a trip upstate to North Dakota on Oct. 2 serving as the opener and the South Dakota State showdown also on the road on Nov. 6.