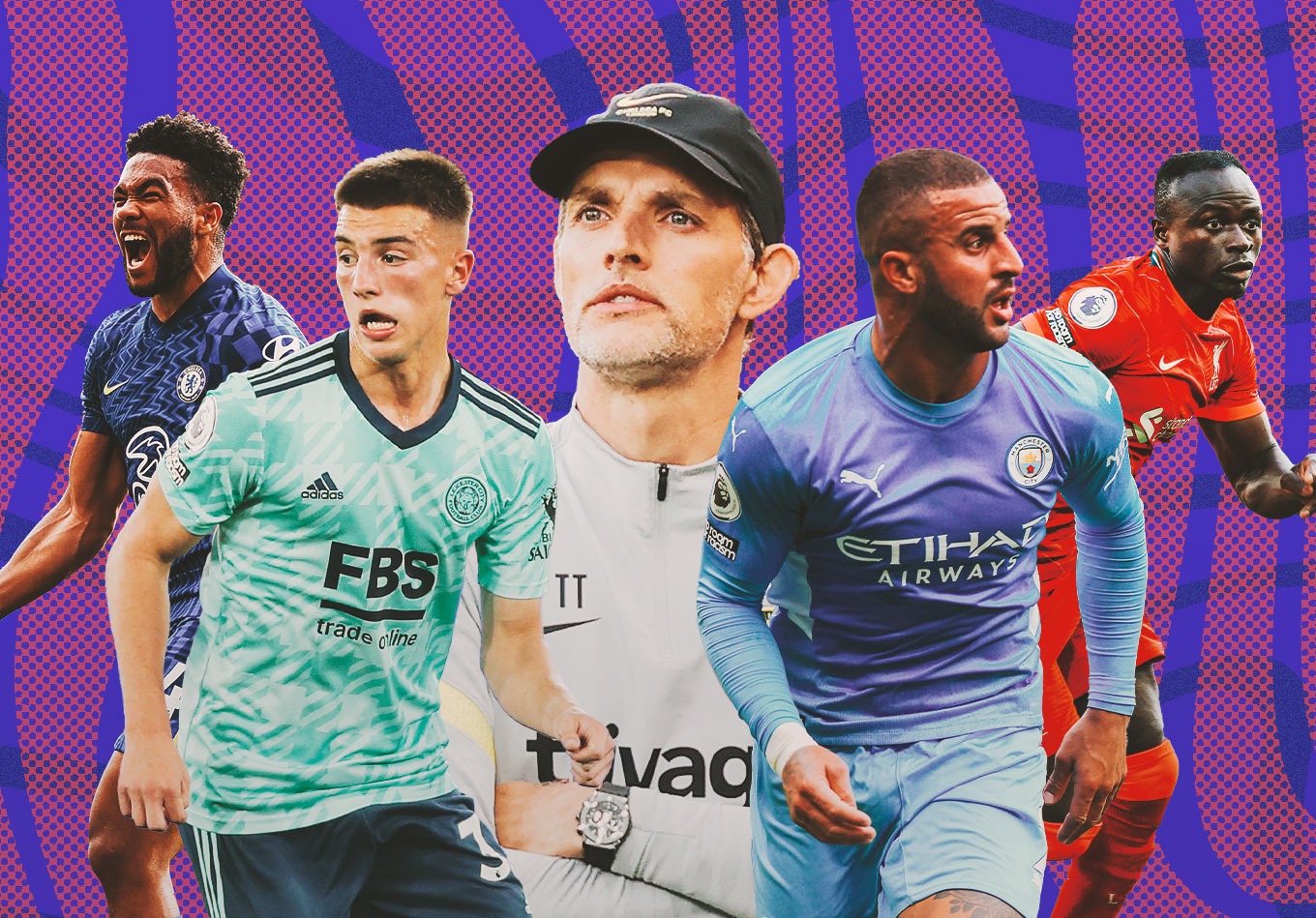 The Download: Tactical Learnings From the Premier League’s Opening Month

The return of full-capacity crowds has reinvigorated the Premier League after a year of uninteresting football from a tactical perspective, but statistical analysis of the 2021-22 season shows things aren’t quite as they seem.

Alex Keble takes a look at the four biggest trends of the new season so far, analysing the speed and intensity of matches, the use of back threes, the growing prominence of the full back, and how ‘Big Six’ contests are changing shape.

Returning Crowds: Not Had the Tactical Impact We Anticipated

Having staggered like zombies through the last 12 months, infected by the brain fog of lockdown and without a crowd to snap them out of it, the return of supporters means a return to volatile, fricative, and high-intensity action. Or maybe not. That might be what the first three rounds of action looked like to the naked eye, but the statistics tell a different story.

The average PPDA (passes per defensive action, a measure of pressing intensity) across the Premier League so far this season is 13.5, exactly the same as last year and slightly higher than the 12.9 in 2019-20. Another way to measure the tempo of matches is to look at average passes per minute, which is down from 5.3 in 2020-21 to 4.9 this year, while a manic start to last season means there have been fewer goals – 85 compared to 104 from the first three rounds of 2020-21.

In other words, we have not yet returned to pre-pandemic levels of speed or intensity. It was widely expected that the Premier League would be reshaped by the emotional destabilization of bums on seats, but in reality, the psychological impact of live crowds seems to be just that: psychological, affecting how the games look and feel but not necessarily the tactical rhythms.

That is not to say supporters have had no impact on results. Home advantage is beginning to return – up from 41.1% to 46.7% – and crowds baying for blood, like Brentford’s supporters did in their 2-0 win over Arsenal on the opening weekend, may have had an unmeasurable effect on the respective confidence and anxiety of the two teams.

Three at the Back Comeback?

There is a clear trend towards the use of back threes or back fives over the last few years, and although we are technically down from 31.2% of games featuring a back three last season to 26.7% this season, the data is merely skewed by the small sample size. What’s more, often the nominal formation shown on pre-match team sheets does not reflect the real shape, especially at the top clubs, where coaches expect their players to shift between systems.

Manchester City, Arsenal, and Leicester City regularly deploy a back three by positioning a full back (Kyle Walker, Callum Chambers, and Luke Thomas respectively) as a third centre-back when on the front foot.

We can illustrate this simply with two examples from Leicester’s win over Norwich, on Matchday 3.

Out of possession their backline clearly shapes up in the classic four-at-the-back formation.

But in transition, as was the case for their opening goal, Thomas drops in to become a third centre back, while Ricardo Pereira bombs forward.

This is an example of the formation shown on the pre-match team sheet shifting during the action.

Beginning with Antonio Conte’s title-winning 3-4-2-1 back in 2016-17, the Premier League’s elite clubs have increasingly attacked in a rough 3-2-5 shape that utilises the half-spaces (the column of the pitch between full back and centre back) as the most creatively fertile area. As Conte showed and the rest have found, the configuration of a 3-2-5 produces the highest number of triangles across the width and length of the pitch.

But while Chelsea under Thomas Tuchel directly mimic Conte’s use of inside forwards in this zone, Pep Guardiola deploys free eights – a free position somewhere between a central midfielder and support striker – in Kevin de Bruyne and İlkay Gündoğan, to occupy the half-spaces while Jürgen Klopp tucks Sadio Mané and Mohamed Salah infield.

The prevalence of back threes is a knock-on effect of this trend: to counter-balance the use of half-spaces a team needs to maintain width, via wing backs or full backs, which in turn necessitates greater defensive cover behind them – hence a third centre-back becoming the new norm.

The Importance of the Full Back

As the half-spaces become filled with playmakers and defences become trios, we tend to see fewer three-man midfields – and certainly fewer two-man pivots holding down the middle of the park. That’s because these tactical trends lead to teams being ultra-compressed between the lines, reducing the necessity of packing the middle with bodies.

The weakening influence of the midfield battle is particularly prominent in territorially uneven games. The defending team’s narrow defensive shell encourages overlapping full backs to work around it, with counter-attacks then funnelled down the flanks to expose the space the full backs have vacated.

Consequently, those full back positions have surpassed central midfield as the most important zone of the pitch. Reece James and Trent Alexander-Arnold stole the headlines a fortnight ago, the former smashing his record of four touches in the opposition box with 11 against Arsenal and the latter produced 12 crosses and created seven chances against Burnley.

To illustrate the importance of the position note the variation in how different players interpret the role; Alexander-Arnold regularly dips into the half-space and rarely gets to the byline while James overlaps more traditionally.

There is a notable shift from last season, too. Three of the current top eight Premier League players for open-play expected assist totals are full backs (Alexander-Arnold, James and Vladimir Coufal), compared to just two among the top 14 in 2020-21.

Although Liverpool’s 1-1 draw with Chelsea in Matchday 3 was played at a good intensity, at least until James’ red card, it was nevertheless a game of possession versus counter. Tuchel’s team held 37% possession even before going down to 10 men. Having first adopted a more conservative mid-block in the late stages of the Champions League as Paris Saint-Germain manager, Tuchel has brought this style to big Premier League games.

After years of furious end-to-end matches at the top of the table as Guardiola and Klopp went hell for leather, several factors have aligned to create a new trend towards more careful sparring as one side absorbs pressure. Tuchel’s safer approach, the long-term impact of pandemic football on the tactical landscape, and the presence of Rafael Benítez and Nuno Espírito Santo among the Premier League top 10 suggests we will see less chaos and fewer goals in six-pointers.

In all four of the ‘Big Six’ matches so far this season one team has held at least 65% possession, compared to only one out of the four corresponding fixtures in 2020-21. The catastrophe unfolding at Arsenal perhaps skews the data somewhat (Mikel Arteta isn’t deliberately losing the possession battle) but Tottenham’s appointment of Nuno should ensure the trend remains. Spurs’ possession average is down from 51.3% last season to a remarkable 44.8%.

Along with Ole Gunnar Solskjaer’s preference for a safe, non-pressing mid-block and quick breaks in ‘Big Six’ matches, this year’s Premier League’s blockbuster occasions will be all about careful sparring and possession versus counter-attacks.

They will also, of course, be defined by the intensity and emotion of a full crowd, by back threes holding the line, and by full backs taking centre stage. This is Premier League football, 2021-22 style.