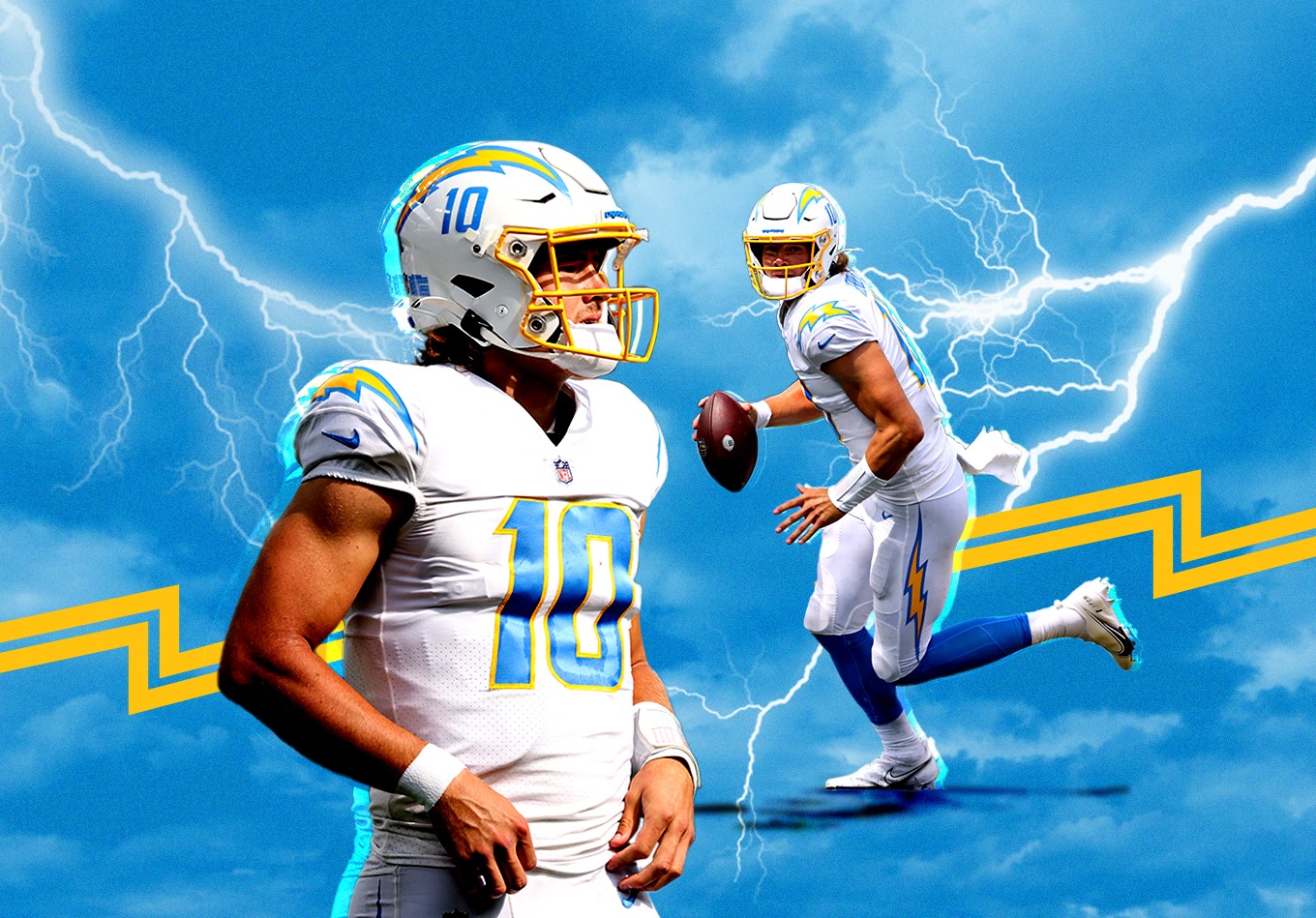 Nickel Coverage: Is Justin Herbert Emerging as an MVP Candidate?

Justin Herbert just went blow for blow with Patrick Mahomes and the Kansas City Chiefs – and prevailed. It’s early, but the Los Angeles Chargers star has to be considered in the MVP mix. Right?

‘It’s too early to talk about the MVP!’

That’s what you might think when the NFL’s most prestigious individual award is brought up in discussion in September. On the surface, that is reasonable logic three weeks into an extended 17-week season. There are many twists and turns to come that will ultimately decide the identity of this year’s Most Valuable Player.

Yet the reality is that talk of who is most deserving of the game’s top solo prize plays a critical role in forming the narrative of a season. Conversation over which quarterback – sorry, Aaron Donald – is most deserving of the award at certain points of the campaign and what impressive performance does for a player’s hopes consistently captures attention and creates heated debate, regardless of whether we think such talk is premature.

By the end of last year, Aaron Rodgers had rendered any suggestion of alternative candidates pointless with a stunning 2020 season for the Green Bay Packers. While Rodgers did his prospects of retaining the award no harm by making 37 seconds seem like an eternity in the Packers’ last-gasp win over the San Francisco 49ers on Sunday night, the opening stages of the season suggest he will have intense competition.

And perhaps his biggest threat plays his home games several hours south of Levi’s Stadium, where Rodgers unsurprisingly was the leading man in the theatre the Packers and Niners produced in primetime. Indeed, long before Mason Crosby was sending a 51-yard field goal into the Northern California night to settle a fierce NFC battle, Justin Herbert and the Los Angeles Chargers took a similarly dramatic AFC contest off the leg of their kicker, with Brandon Staley’s faith in Herbert and the passing game rewarded with a win that alters the complexion of the playoff race.

Herbert’s four-yard touchdown pass to Mike Williams, the second time in the game he hooked up with the former Clemson star, sealed a 30-24 win over the Kansas City Chiefs that solidified the Chargers’ status as a threat to the two-time defending AFC champions, who dropped to a losing record for the first time since 2015.

It was just reward for a display in which Herbert furthered his MVP credentials. The reigning Offensive Rookie of the Year outshined Patrick Mahomes on a day where the man most regarded as the game’s most talented and most explosive quarterback made history.

By throwing for 260 passing yards, Mahomes took his career tally to 15,092, becoming the first quarterback in NFL history to reach 15,000 in 50 games or fewer, doing so in his 49th appearance. Herbert is not quite on the same pace, averaging 294.0 passing yards a game through the 18 he has played so far in his still embryonic career. Last year’s sixth overall pick is on track to reach 15,000 in 51 games.

But he outshone the 2018 MVP in Week 3, finishing with 281 yards, four touchdowns and zero interceptions while Mahomes threw for three scores but with two picks, including one with the game tied that set the Chargers up to go for the game-winning score.

Herbert became the fifth player in the Super Bowl era to record five games with at least three touchdown passes and zero interceptions in his first two seasons. He joins Lamar Jackson (six), Dan Marino (six), Mahomes (five) and Dak Prescott (five) on that list. Three of the other four members of that exclusive club have all won the MVP.

The raw numbers – fourth in passing yards with 956 but 17th in yards per attempt (7.59), tied for 10th in touchdowns (six) and 18th in passer rating (97.9) – do not fully support the argument that Herbert is a candidate to join Jackson, Marino and Mahomes this season.

However, an understanding of why Herbert deserves to be firmly in the mix through three games requires a deeper look at his statistics and an examination of the high-level throws he is making look ridiculously routine.

Herbert finished Week 3 with a well-thrown ball percentage of 91.7. Only one quarterback, Kirk Cousins (91.9), to attempt more than one pass was superior in that regard going into Monday Night Football.

He did much of his best work when under pressure too, delivering a perfectly thrown jump pass to Keenan Allen for Los Angeles’ opening touchdown with defensive tackle Khalen Saunders in his face, and putting a pass down the right sideline to where only Williams could get it when the duo connected for the first of two fourth-quarter scores despite Chris Jones screaming off the edge.

More exquisite placement came on the decisive drive when Herbert found Williams on a lofted back-shoulder throw to put the Chargers close. It was a pass he delivered with his weight falling away from it. He then hit the same receiver for the game-winner.

Those plays will be the ones most remember from Herbert’s contribution to an engrossing encounter that ended with a failed Hail Mary from Mahomes after the Chargers inexplicably left him with over half a minute to produce a reply.

Yet just as impressive from Herbert were the plays that came up short, including a second-quarter missile from his own 45-yard line – one he uncorked after escaping pressure and rolling left – which was broken up in the endzone to prevent Jalen Guyton hauling in a spectacular touchdown. But that incompletion served as yet more evidence of Herbert’s near-boundless ceiling.

Herbert has consistently demonstrate that upside over the first three games of the year. His well-throw percentage of 84.4 is fifth in the NFL among those to attempt multiple passes, with Kyler Murray (84.5) the only player to have averaged 7.0 or more air yards standing above him on the list.

While Murray provides a greater running threat than Herbert, the Chargers’ signal-caller has done a superior job of taking care of the ball. He has thrown a pickable pass on 2.46% of passes, compared to 4.12% for Murray.

Though Murray has one more win than Herbert this season, he does not yet have the signature moment the former Oregon man produced at Arrowhead.

With already 1,005 passing yards to his name to go with seven touchdowns and a further three scores on the ground, Murray is building a strong case of his own for MVP. Yet wins over the Tennessee Titans, Minnesota Vikings and Jacksonville Jaguars are unlikely to move the needle to the extent that Herbert’s victory over Mahomes should.

Murray’s MVP stock could receive a bump when the Cardinals face fellow unbeaten division rivals the Los Angeles Rams in Week 4. However, for now, he is playing catch-up to Herbert in terms of a potential season-defining win that permeates the consciousness of the wider NFL public.

Anybody who has taken even a passing interest in a Chargers franchise known in recent years for letting opportunities slip through their grasp should recognize Herbert will have a plethora of hurdles to overcome before he can claim to be an MVP frontrunner.

But over the first three games, he has the production, at least in terms of overall yardage, and has showcased the accuracy to stand as the top challenger to succeed Rodgers at this extremely early juncture.

Herbert enters Week 4 in a position of which few quarterbacks have experience, going blow for blow with Mahomes and coming out on top. If he maintains that level of play, Herbert will have an excellent shot of replicating Mahomes and Jackson in winning the MVP in his second season.