Barcelona 2-8 Bayern: The Numbers Behind an Unforgettable Game 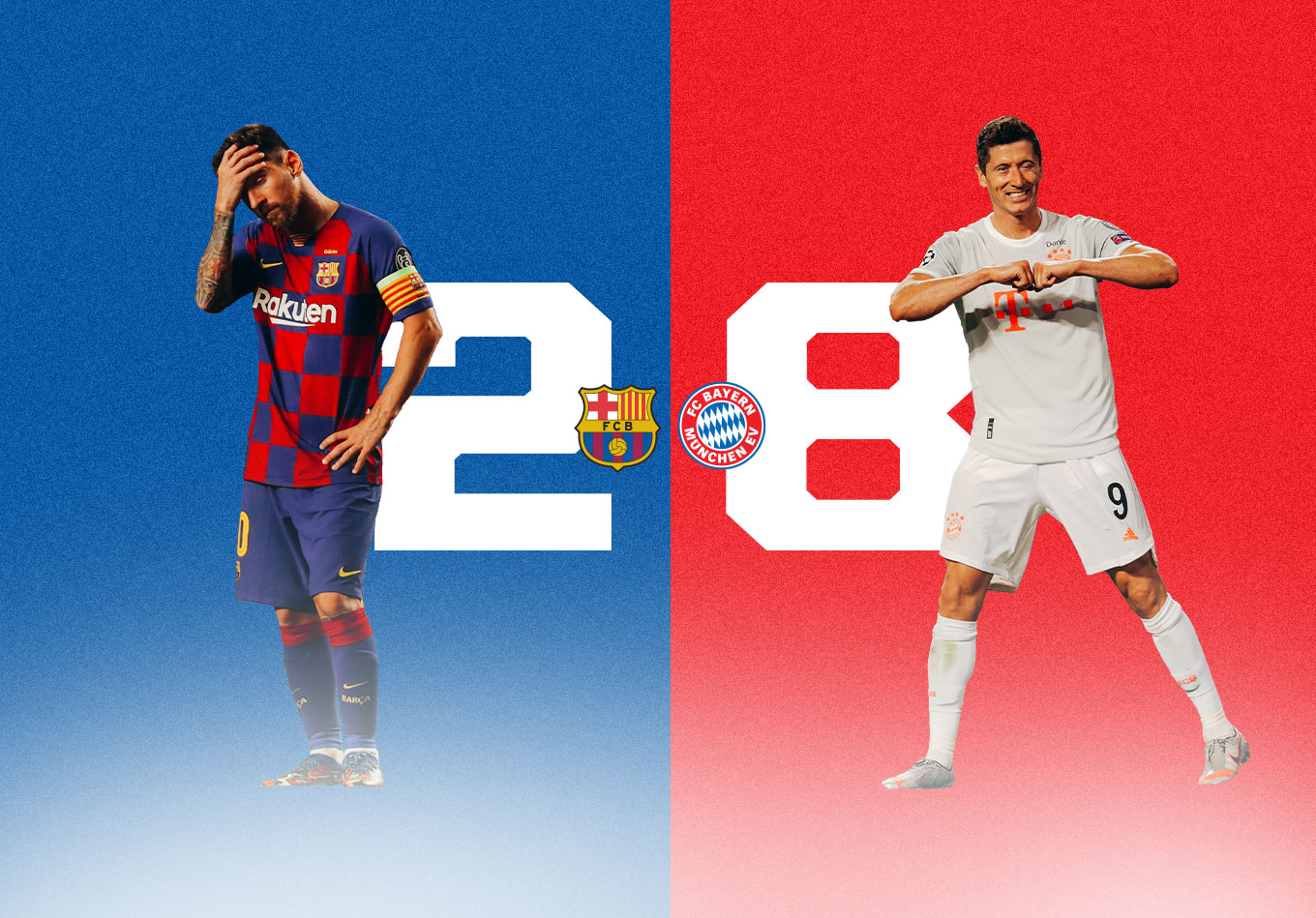 Barcelona 2-8 Bayern Munich: Reliving the Numbers Behind an Unforgettable Game

For different reasons, Barcelona and Bayern Munich fans will never forget the last time these sides met in a Champions League match.

Barcelona and Bayern Munich will lock horns on Tuesday in a tantalising Champions League group game at Camp Nou.

It will be the first meeting between these sides since last August in Lisbon, when they served up a 10-goal contest that will live long in the memory – although that’s something Barca fans must wish were not so.

Bayern were 8-2 winners in that quarter-final, utterly dismantling a Barca side who looked increasingly lost at sea with every goal that went in. It was a match with seismic repercussions, too: while the Bundesliga giants went on to win the treble, Barca sacked head coach Quique Setien, Lionel Messi asked to leave and the end of Josep Maria Bartomeu’s presidency was hurried along.

It was 1-1 after just seven minutes, a David Alaba own goal cancelling out Thomas Müller’s opener, but that was about as close as the contest ever got.

Ivan Perišić, Serge Gnabry and Müller again scored before the break. It was the first time a team had conceded four goals in the first half of a Champions League knockout match for five years, and the fact all four of Bayern’s first goals came inside 31 minutes was a record in the competition.

Luis Suárez got a goal back, but the game quickly descended into farce for Barca, with Joshua Kimmich, Robert Lewandowski and Philippe Coutinho – on loan from the Catalans – adding to the scoresheet. It meant Bayern became the first team to score eight times in a knockout game in the modern competition, as Barca conceded eight goals for the first time since an 8-0 Copa del Rey loss to Sevilla in 1946.

Barca faced 26 shots in total, the most they have ever faced in a Champions League match along with a game against Bayer Leverkusen in December 2015, when they had already won their group. Their expected goals against figure of 5.72 was by far the highest they have conceded in a game in this competition, the nearest being 3.44 against Borussia Dortmund in the group stages. Perhaps that was a warning…

It was certainly a game to forget for Marc-Andre ter Stegen in Barca’s goal. He had never before conceded more than four in a Champions League match for the Catalans, saving just 38% of Bayern’s attempts. By contrast, he saved all but one of the 26 shots Leverkusen had in that game six years ago.

Of course, it was an occasion to savour for Bayern and their forwards. Müller’s double took him to six goals in five games against Barca, more than any other player has managed in the Champions League (Andriy Shevchenko scored five against them). It also took the German international to 23 career goals in the knockout phase, a tally at the time bettered only by Messi (47) and Cristiano Ronaldo (67).

Lewandowski’s goal took him to 50 in the competition for Bayern in just 60 matches. Ronaldo is the only player to have achieved the milestone in fewer games for a single side, having done so in 50 appearances for Madrid. Lewandowski also became the first Bayern player to score in eight consecutive games in the tournament, and the fifth overall.

Even Coutinho enjoyed himself against the club where he has barely made an impact since his mega-money move from Liverpool. He has only ever scored more in a single Champions League game once – a hat-trick for Liverpool against Spartak Moscow in 2017 – and he had only managed four goals in his previous 20 appearances in the competition.

For Barca, the game descended into disjointed chaos after that end-to-end opening. Suárez ended up touching the ball in his own box as often as he did in Bayern’s (three times), while Nelson Semedo endured a torrid outing a right back, giving up possession 10 times and being dribbled past on three occasions. On average, he completed fewer than three passes for every one instance he lost the ball.

As for Messi, who probably thought this would be his last Champions League game for his boyhood club, he managed just 59 touches of the ball, his lowest figure in a game he started since the 4-0 loss to Paris Saint-Germain in February 2017. In the end, Bayern scored more goals than Barca managed shots (seven) in the contest.