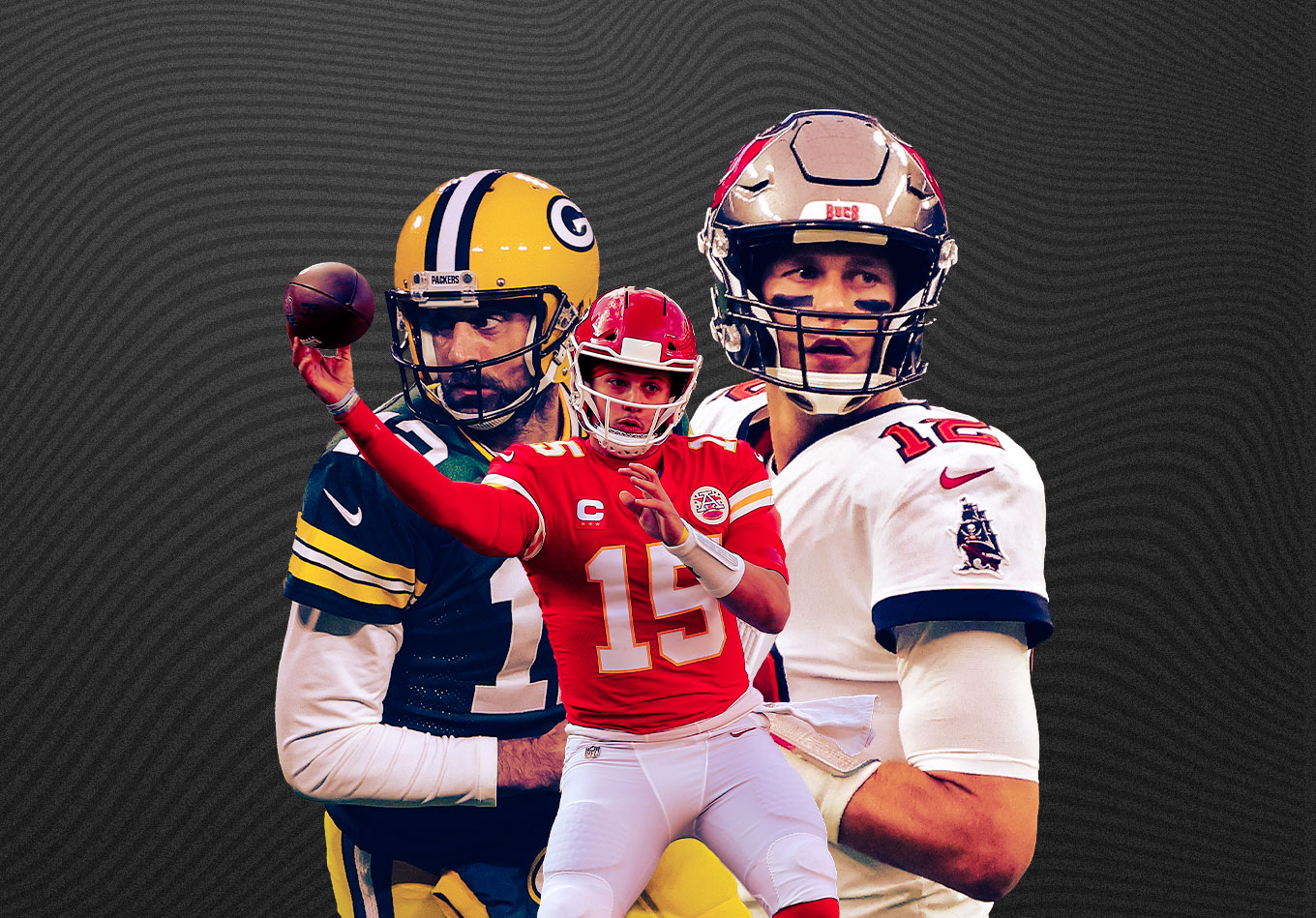 The Week 4 meeting of Tom Brady’s Tampa Bay Buccaneers and Bill Belichick’s New England Patriots should capture the entire league’s attention as Brady returns to Foxborough for the first time since saying a shocking farewell to his home of 20 seasons before going on to win a seventh Super Bowl ring with the Bucs.

Or how about a duel between Patrick Mahomes and the Kansas City Chiefs and Aaron Rodgers and the Green Bay Packers in Week 9?

It will pit the reigning MVP against the 2018 MVP and Super Bowl LIV MVP. Rodgers finished third in the NFL in well-thrown percentage at 82.4 last season, while Mahomes was fourth at 81.1% in 2019 when he led the Chiefs to the Lombardi Trophy before falling to 26th with a 76.7 mark a year ago.

But the games with the best narratives on the surface do not always produce the best matchups. Let’s take a look at five other games on the schedule that are in the mix to be among the most exciting of the 2021 campaign.

The Packers trounced a 49ers team decimated by injuries last season, though that was probably hollow revenge for Green Bay’s NFC championship game humbling at the hands of San Francisco in the 2019 season.

Typically, when Rodgers has visited the team he idolized in his youth, things have gone poorly for the Packers. He has won two of his four regular-season meetings with the Niners in the Bay Area but has lost to San Francisco on each of the three occasions he has faced them in the playoffs, with two of those defeats on the road.

Still, it promises to be a fascinating duel of NFC contenders. And the allure would only increase if somehow No. 3 overall pick Trey Lance is the starting quarterback in the contest.

With Rodgers still around, the key matchup in this one is the reigning MVP and the Packers offensive front against a Niners defensive line that should get back edge rusher Nick Bosa after he missed most of the 2020 season with a torn ACL.

Rodgers’ well-thrown percentage under pressure ranked ninth in the NFL at 71.0 in 2020 and he’ll likely have to maintain that accuracy under duress if Bosa is back to his best. The 2019 Defensive Rookie of the Year trailed only Adrian Clayborn and elder brother Joey with a pressure rate of 28.3 in his first season in the league and he sacked Rodgers in the regular season and the NFC title game.

Yes, Brady vs. Belichick is the game everybody in Tampa will be most excited for, and the season opener between the Super Bowl champions and the Dallas Cowboys will be a primetime ratings monster, but perhaps the best duel involving the only player with seven Super Bowl rings will take place when the Buccaneers head west.

The Rams edged the Bucs 27-24 in Tampa last season and should provide a stern test again at SoFi Stadium with Matthew Stafford taking over under center. But Brady will certainly be more concerned about three-time Defensive Player of the Year Aaron Donald on Los Angeles’ defensive front.

Brady was phenomenal when it came to avoiding interceptable passes last season. He threw a pickable pass on just 13 of 590 pass attempts in 2020, a percentage of 2.20 that trailed only Alex Smith (2.12). When that number increased to 3.45 under pressure, though that was still the fourth-lowest pickable pass rate in the NFL under duress.

But no defender in the league strikes fear into the heart of quarterbacks quite like Donald, who led all defensive tackles in 2020 with a pressure rate of 27.7 and an adjusted sack rate of 5.5.

Donald can destroy the best-laid plans of any offense, and surviving the challenge he and the Rams will pose will be one of the biggest tests for Brady and the Bucs in their bid to repeat as champions.

This will be a rematch of last season’s AFC championship game in which the Bills did not produce an effort reflective of their breakthrough 2020 season. This year, Buffalo appears to be the team best placed to challenge Kansas City in the AFC.

The headline act of this clash is Mahomes and Josh Allen – two of the leaders in the revolution of athletic, cannon-armed quarterbacks who have taken the league by storm.

But an underrated aspect of this game will be Stefon Diggs’ performance against a Chiefs secondary that does not get the credit it deserves. Kansas City held him to six catches for 77 yards in the playoff matchup, though Diggs later revealed he played through the postseason with an oblique tear.

When healthy, Diggs has the ability to do significantly greater damage. He led the NFL with 1,535 receiving yards in his first season in Buffalo and trailed only Davante Adams (3.9) with 3.6 burn yards per route.

However, the Chiefs’ projected starting cornerbacks might have the means to slow him down. L’Jarius Sneed was fifth among all corners in preventing big plays, allowing a play of 20 yards or more on just 14.5% of his targets. Charvarius Ward was fourth among corners in burns allowed, giving up a burn on just 32.7% of his targets.

The balance of power in the AFC North is shifting towards the Ravens and Browns and their Monday Night Football game in Cleveland last year was among the most entertaining of the 2020 campaign.

In the end, the Browns’ inability to stop Lamar Jackson, even after his apparent ‘comfort break,’ from making the big plays in Baltimore’s thrilling comeback was the decisive factor in the Ravens’ 47-42 triumph.

Cleveland took steps to stop such a scenario from playing out again, using their first-round pick on a cornerback in Greg Newsome II. He easily led college football with a 13.9 burn-allowed percentage in an abbreviated final season at Northwestern.

His addition, and that of versatile second-round linebacker Jeremiah Owusu-Koramoah, should help the Browns do a better job of slowing down opponents.

But whether those arrivals are enough to make the difference against Jackson and the Ravens is another matter.

An underrated downfield thrower whose well-thrown percentage of 60.0 on throws of 25 or more air yards was seventh in the league last year, Jackson has another dynamic weapon to target in the form of receiver Rashod Bateman. The first-round pick, who should be well healed from August groin surgery by the time this one kicks off, ranked sixth among Power Five wideouts with at least 50 targets with 16.2 burn yards per target during his stellar 2019 season. He could be the No. 1 receiver Jackson has long since lacked.

Bateman, who only played five games for Minnesota in 2020 before opting out, excelled at creating separation two years ago while having an average depth of target of 16.2. With him and speedster Marquise Brown in the mix, Jackson does not lack big-play weapons, and Cleveland’s ability to keep them under wraps could be critical in deciding an ultra-competitive division in 2021.

The Bears have rarely been high on the list of teams to look out for when it comes to intrigue in recent years, but that all changed when they traded up to draft Justin Fields 11th overall.

Once Chicago ends the charade of committing to Andy Dalton as starting quarterback and goes with the high-upside rookie, the Bears have the potential to be an extremely interesting watch.

That could be the case this late in the season when the Bears face the quarterback they reportedly pursued before picking Fields in Seahawks star Russell Wilson.

A quarterback battle between Fields and Wilson would feature two signal-callers who each excel with their accuracy throwing the deep ball. Of quarterbacks with at least 25 throws of 25 or more air yards, only three players (Ryan Tannehill, Philip Rivers and Derek Carr) had a higher well-thrown percentage than Wilson’s 63.0 on those attempts last season.

Fields was similarly proficient in attacking downfield in his final year for Ohio State, posting a well-thrown percentage of 76.5 on throws of 15 or more air yards that was superior to that of Trevor Lawrence, Zach Wilson and Mac Jones.

If his success in that regard quickly translates to the NFL, the Bears’ trip to the Pacific Northwest could turn into a scintillating showcase of the deep passing game. For the first time in a while, the Bears have the potential to be must-see TV.