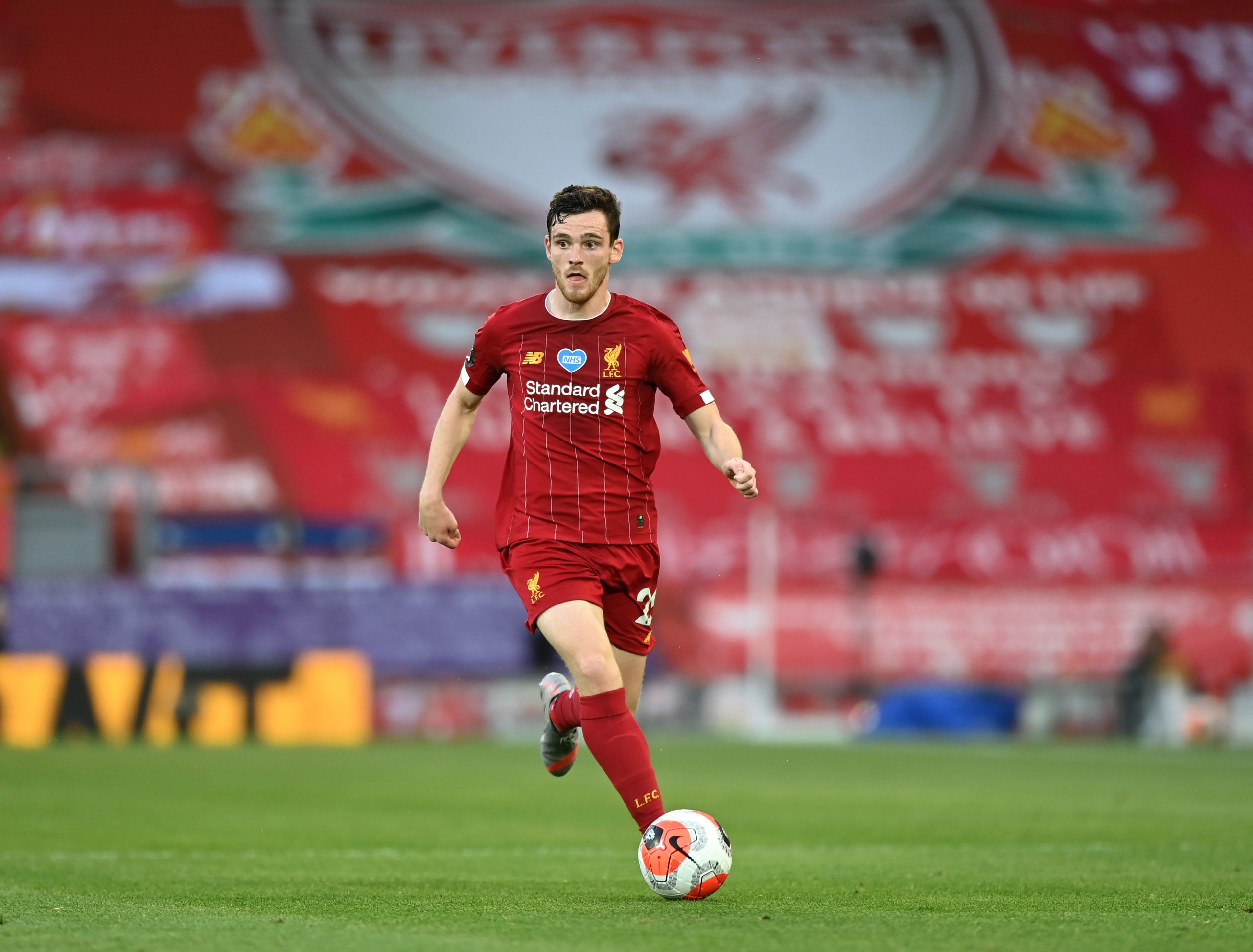 Andy Robertson will miss the start of the new Premier League season after suffering ankle ligament damage in Liverpool’s friendly with Athletic Bilbao on Sunday. While a scan banished any fears of a fracture, revealing – in Robertson’s own words – “nothing too major”, the ligament damage still means that the Scotland left-back will be facing a spell on the sidelines. It means that Liverpool are without their very own Robbo Kop.

Robertson has been a virtually ever-present member of Jurgen Klopp’s side since joining from Hull City in 2017. Since his arrival, only Mohamed Salah (203), Roberto Firmino (202), Georginio Wijnaldum (195) and Sadio Mané (189) have played more matches in all competitions than Roberston (177), and the full back started every single one of the Reds’ games last season.

Together with Trent Alexander-Arnold, it’s not disingenuous to say that the pair have redefined the role of the modern-day full back. Tasked with maintaining heavily advanced positions, the duo are essentially left- and right‑sided playmakers, supplying the ammunition for Liverpool’s deadly front three. Both have set new assist records for defenders under Klopp.

They’ll also be without Robertson’s lung-busting energy up and down the left. The Scottish international made more sprints last season (843) than any other player in the league.

So, what does this mean for Liverpool? Well, it means that Kostas Tsimikas – who the club singed for £11.75 million from Olympiacos – is set to make his first Premier League start for the club in their opener against Norwich City. There’s not a lot to say about his Liverpool career so far: he played just six minutes of league football in his debut season at Anfield. But the Reds are known for shrewd transfer business, so they must have seen something they liked.

It was Tsimikas’ loan spell at Willem II in the Dutch Eredivise that first caught their eye. The Greek international made 33 appearances for the Dutch side and was the team’s main creative thrust from left-back. He created 32 chances that season – more than anyone else on his team – and racked up 5.2 expected assists, again more than any of his teammates. That figure suggests he was unlucky not to register slightly more than his three assists that season. In fact, the xA number was enough to rank him fifth overall in the Dutch Eredivisie for defenders that season.

He further impressed with his performances for Olympiakos in the Champions League in 2019-20.

In Liverpool’s final pre-season game against Osasuna last night, Tsimikas put in a timely performance, creating the team’s second goal for Firmino with a devilish whipped ball after sharp interplay with Takumi Minamino.

The repopulated Kop will be hopeful that the Greek can replicate that performance over the next month or so and deputise ably in the place of the inspirational Robertson.

Twenty five years ago Newcastle United were the players in the global transfer market, paying a world record £15m to bring Alan Shearer to St James’ Park. This summer, not so much, with Magpies fans feeling a little concerned that their club was standing still while those around them were revamping and/or bolstering. But over the weekend news emerged that United have agreed a fee of around £25m with Arsenal to bring Joe Willock to the north east of England permanently. Willock’s goalscoring form at Newcastle in the spring was enough to keep the club clear of any relegation worries, as well as allowing him to break a fairly significant Premier League record. Newcastle fans, including Shearer himself, approve of this news.

Signing a player who you borrowed the previous season may lack the sheer glamour of, say, getting to steal Lionel Messi from Barcelona so you can team him up with Neymar and Kylian Mbappe, but Newcastle at least know what they are getting with Willock. It’s sometimes forgotten that Premier League clubs in the 1990s were forbidden from loaning players to each other, a rule that was changed in 2003, only for Newcastle to lend Lomana LuaLua to Portsmouth, who then scored against Newcastle, thus forcing another tweak of the regulations, to prevent players featuring against their parent club.

Willock scored on his Premier League debut against Southampton in February, enjoying the fact this was his third game against them in his last six Premier League appearances, thanks to scheduling, but it was the form he ended 2020-21 with that has convinced Newcastle to spend big on him. Goals in each of his last seven appearances, the first three of which came as late substitute appearances, equalled a club record (held by Alan Shearer, naturally), and puts Willock only four behind the Premier League record, set by Jamie Vardy in Leicester’s unforgettable 2015-16 campaign. While it remains unlikely Willock will score in his first four appearances this season, the presence of Vardy and Ruud van Nistelrooy twice in the top five suggests it is a trait certain players have, rather than a completely random process. Willock also became the youngest ever Premier League player to score in six successive matches, breaking a record held by Romelu Lukaku ahead of Thierry Henry, Cristiano Ronaldo, Michael Owen and Shearer. Decent company to be in.

Willock’s impressive shot map from 2020-21 shows eight goals from an xG of 4.3, with three great chances in the six yard box all tucked away like a natural finisher. He even found time to squander a penalty against Manchester City in the excellent 4-3 defeat against the champions in May. Without Willock last season Newcastle picked up one point per game. Over a season that spells big trouble. With Willock they averaged 1.4 points per game. Over a season that means around 53 points and blessed safety. Sometimes certain players and certain clubs just work out. If a transfer of more than £20m pounds can be deemed a no-brainer, Joe Willock to Newcastle is surely it. DA

The perfect partnership that many thought would never end, until the burofax came in last summer. Since then, it’s been a partnership of convenience for a year until Messi’s deal finally ran down and he could escape. Now the divorce seems complete, with the all-time club legend announcing that despite a previous change of heart, he wishes to continue his career elsewhere.

There are many reasons why this is happening, but we aren’t the place to come to find those out. We’re here for the cold, hard stats. Lionel Messi is a number freak, so here’s a look back at his Barcelona career.

Lionel Messi played 778 competitive games for Barcelona in all competitions, scoring 672 goals and delivering a further 266 assists – a total of 938 goal involvements overall at the club. His first goal for the club came on May 1, 2005 versus Albacete at Camp Nou, assisted by Ronaldinho.

Messi scored in 21 league games in a row between November 2012 and May 2013 – the longest run for a player in the competition ever.

Messi played the most games (219), scored the most goals (211) and collected the most assists (79) under Pep Guardiola. This gave him a record of 0.96 goals per game under the current Manchester City boss – only under Tito Vilanova did Messi have a better ratio (1.20).

2011-12 was Messi’s best-ever season in front of goal. In Guardiola’s final season as coach of Barcelona, the Argentine scored 73 goals and assisted 29 more (another career-high) in 60 games for the club – but this still wasn’t enough to seal the La Liga title. Sixty of his goals that season came in the Spanish top-flight, but with their next top scorer being Alexis Sánchez on 12 goals, his goals alone couldn’t seal the league championship.

He may have only scored five goals in a game once in his career, but overall he scored 48 hat tricks for Barcelona in competitive matches. The last of these came on February 22, 2020 against Eibar, when he scored four times in a 5-0 victory.

His first-ever hat trick for Barcelona came against Real Madrid in a 3-3 La Liga draw back in March 2007 – the only time that Barca didn’t win a match that Messi scored a hat trick in.

Overall, Messi scored 26 goals against Real Madrid – the all-time leading goalscorer in El Clásico. He scored 15 goals at Santiago Bernabéu in all competitions, more than any other venue as visitor for Barcelona.

It was against Sevilla that Messi inflicted the most damage, however. Messi scored 38 goals in 43 games against them, six more than he did against any other opponent. Overall Messi scored against 38 different opponents in La Liga, more than any other player in the history of the competition.

The goalkeeper to concede the most competitive goals against Messi in a Barcelona shirt was Diego Alves, who conceded 21 goals across matches played versus the Argentina international for Almería and Valencia.

One of the fractures that eventually led to the break in the relationship between Lionel Messi and Barcelona came when Luis Suárez was sold to Atlético Madrid ahead of 2020-21. The Uruguayan forward assisted 47 goals for Messi at Barca; five more than any other player.

Messi’s 474 goals in La Liga is the most ever by a single player and an incredible 163 goals more than the next most; Cristiano Ronaldo (311). His 50 goals in 2011-12 are also the most by a single player in a La Liga season, while he’s topped the scoring charts in eight different seasons – another record.

While Messi’s overall goal tally in the UEFA Champions League (120) is lower than Cristiano Ronaldo’s (134), Messi is the top scoring player for a single club in the competition. He reached the 100-goal mark quicker than Ronaldo (123 apps vs 137 apps) and was also two years younger (30) than Ronaldo (32) when reaching 100 goals in the Champions League.