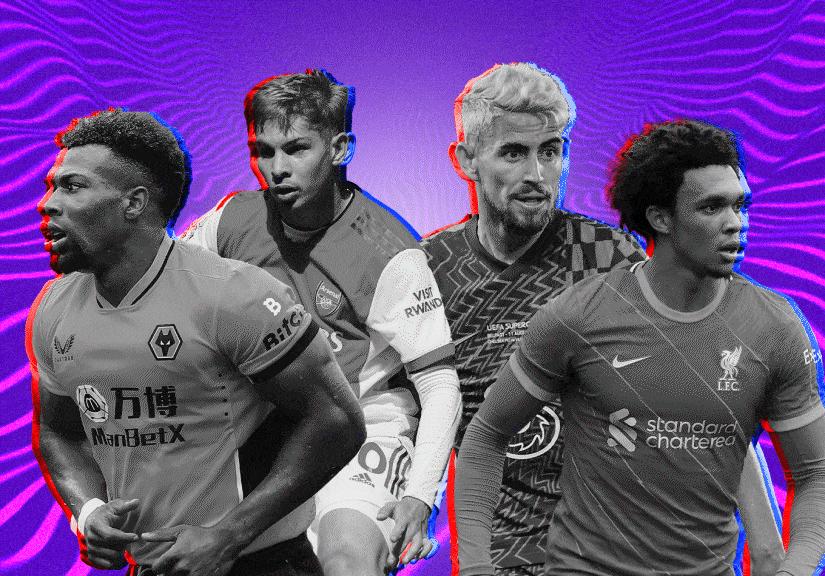 Combining things to make something even more useful is progress. Two parts hydrogen and one part oxygen gives you water, while combining football event data – shots, passes etc – with spatial information – where the players are and were on the pitch – allows us to pose sporting questions that have hitherto been unanswerable.

The Premier League Insight feed is such an output, so ahead of the 2021-22 season, here’s a look back at just a few of the trends from the last campaign.

The guttural roar of anticipation that greets the award of a corner in a game of football in England is largely misplaced, with historically only around 2% of them resulting in a goal. Connoisseurs of the wide set-piece, though, know that there are layers to it, and the way corners were taken in the Premier League in 2020-21 illustrates this.

What’s “better”? An evil inswinger stuck right into the heart of the six-yard box, questioning the very life choices of the goalkeeper, or an arcing outswinger that causes dismay to zonal and man-to-man markers alike.  The former is the chosen approach of Sean Dyche, with Burnley creating a divisional high 29 chances from inswinging corners, five of which resulted in goals. David Moyes at West Ham also saw his side score five goals from inswingers, although the Hammers varied their approach much more, creating as many chances from outswinging corners as they did from inswingers.

Fans of the less invasive but perhaps more progressive outswinging corner should respect Chelsea and Liverpool, who both created a Premier League high 32 chances from outswingers, followed by Brighton on 29. The likes of Manchester City and Manchester United were a lot more even in their application of the routine, with City taking 78 short, 73 inswingers, 86 outswingers and four straight corners. Ah yes, the drilled straight corner, like a 1990s computer game that can’t simulate curvature. Roy Hodgson is obviously a fan as Crystal Palace delivered a league-high 27 of them. Four chances were created, none were scored.

And trust Marcelo Bielsa to do things differently. Not only did Leeds deliver their corners at a higher average speed than any other Premier League team (76.1 kph) they also had the lowest average number of players in the six-yard box for corners, at just 0.32. Burnley, perhaps unsurprisingly, had the highest at 2.44.

Horses for courses, different strokes for different blokes. Be assured: the humble corner will be further monitored in 2021-22 for anyone trying anything different or revolutionary.

We all remember the kids at school who could lash goals in from long range, but who became so drunk on the occasional outcome of their efforts that it became their default choice of shot, even when there were “loads of people in space mate.” That obviously doesn’t happen in professional football, or not quite as much anyway, but there are still players who frequently back themselves to score an xG-defying banger when they seemed to have plenty of passing options available to them.

Now we can tell if they did. The raw numbers from 2020-21 show that Arsenal’s Thomas Partey and Wolves’ Rúben Neves were the chief culprits, with Partey having an average of 3.92 passing options available to him per shot, and Neves on 3.84. Overall Partey had 25 open-play shots and failed to score, while Neves had 50 open-play shots and scored with one of them. Both men are capable of brilliant finishes, but the evidence suggests they could profit from seeking out a teammate more regularly in 2021-22.

Talking of passing, what about the players who not only have finding a teammate at the top of their agenda but also do so in a way that gives that player the best chance of further progressing the ball effectively. In 2021 we all know constructing passing sequences is a solid platform for success, but we can now identify players such as Jorginho, Jordan Henderson, Mateo Kovačić and Gini Wijnaldum who led the way among midfielders last season for average passing options of receiver.

Is it fair to class all four of them as the sort of players who managers revere but who sometimes get taken for granted by supporters? Perhaps, and so the ever-increasing ways of objectively quantifying player performance is a good thing because we can now praise the likes of the men above. Of course, Wijnaldum will not be in the Premier League in 2021-22 having transferred to Paris Saint-Germain, where he will now play a key role in progressing the ball to Lionel Messi, a man whose brain surely sees more options than any other player in the game’s history.

The performance of Liverpool’s front three in 2020-21 was clearly not as productive as it had been in previous seasons, with the combination of Roberto Firmino, Mohamed Salah and Sadio Mané absolutely crucial in winning the Champions League in 2019 and the Premier League a year later. Even so, Salah still scored 22 goals, while Mané and Firmino both provided seven assists each, as well as scoring 20 goals between them. In short, a slight decline from previous heights, but not the end of an era that so many were declaring.

We can also determine this from looking at the Insight feed for runs into the box, which tracks sustained off-ball player movement into the penalty area and thus shows, in a way, the forwards who are working hardest and/or most cleverly making angles for their teammates. The Liverpool trio were first, third and fourth respectively in 2020-21, which is testament to the fact that they were still doing what had made them so successful in previous seasons.

Firmino, as you might expect, was well clear of everybody else, efforts that will eternally endear him to coaching staff at whatever team he is playing for. The Brazilian scored twice for Liverpool against Osasuna last weekend and might be a good bet to put last season behind him and start 2021-22 at a canter.

It’s interesting to see Ollie Watkins in second place too, given that he was credited with a ‘Firmino-like intensity’ at numerous points last season in what was an excellent introduction to top-flight football at Aston Villa. Villa have subsequently added Danny Ings to their squad this summer and, though an excellent finisher, Ings is a very different sort of player. Where Watkins was making 42.3 runs per 90 and 9.8 per 90 into the box, Ings was making 25.7 and 7.5 respectively. What you can see in those numbers is that Watkins’ athleticism allows him to make runs and pull defenders around across the attacking third, whereas Ings reserves the majority of his off the ball movement for the penalty area.

Watkins could be utilised out wide as he was earlier in his career but Villa have strengthened in those areas too. Certainly something to watch in the first few weeks of the new season.

Rare is the team in contemporary football who can afford not to press their opponents, or not expect to be pressed themselves. We now have precise numbers to back up what our eyes told us, and it’s not a huge surprise to learn that in 2020-21 Bruno Fernandes was literally at the heart of every Manchester United game. The Portuguese was not only the most pressed player in the Premier League (1,714 times) but also the player to make the most pressures on his opponents (1,886 times), leaving him in a virtual binary state of either fending off challengers or doing the same to them.

West Ham’s excellent sixth-place finish was the result of copious hard work, and this is reflected by the fact that the second and third places in most pressures behind Fernandes were taken by Pablo Fornals and Tomáš Souček. Burnley’s Dwight McNeil, another player who bleeds work rate, was fourth.

It’s all very well pressuring players when they have the ball, but the sign of a player who has been underlined in red marker pen on an opponent’s whiteboard is being pressured when they don’t have the ball. A form of pass interference for football, it’s perhaps unsurprising to learn that the player who led this category in 2020-21 was Sadio Mané, ahead of Bruno Fernandes and Roberto Firmino. Yves Bissouma and Adama Traoré complete the top five, all players who, in their own way, define and create danger for their team.

In the highly coached, high-wire world of Premier League football it’s no surprise to see these sort of players targeted week in week out by their rivals. It’s up to them to find a way around it.