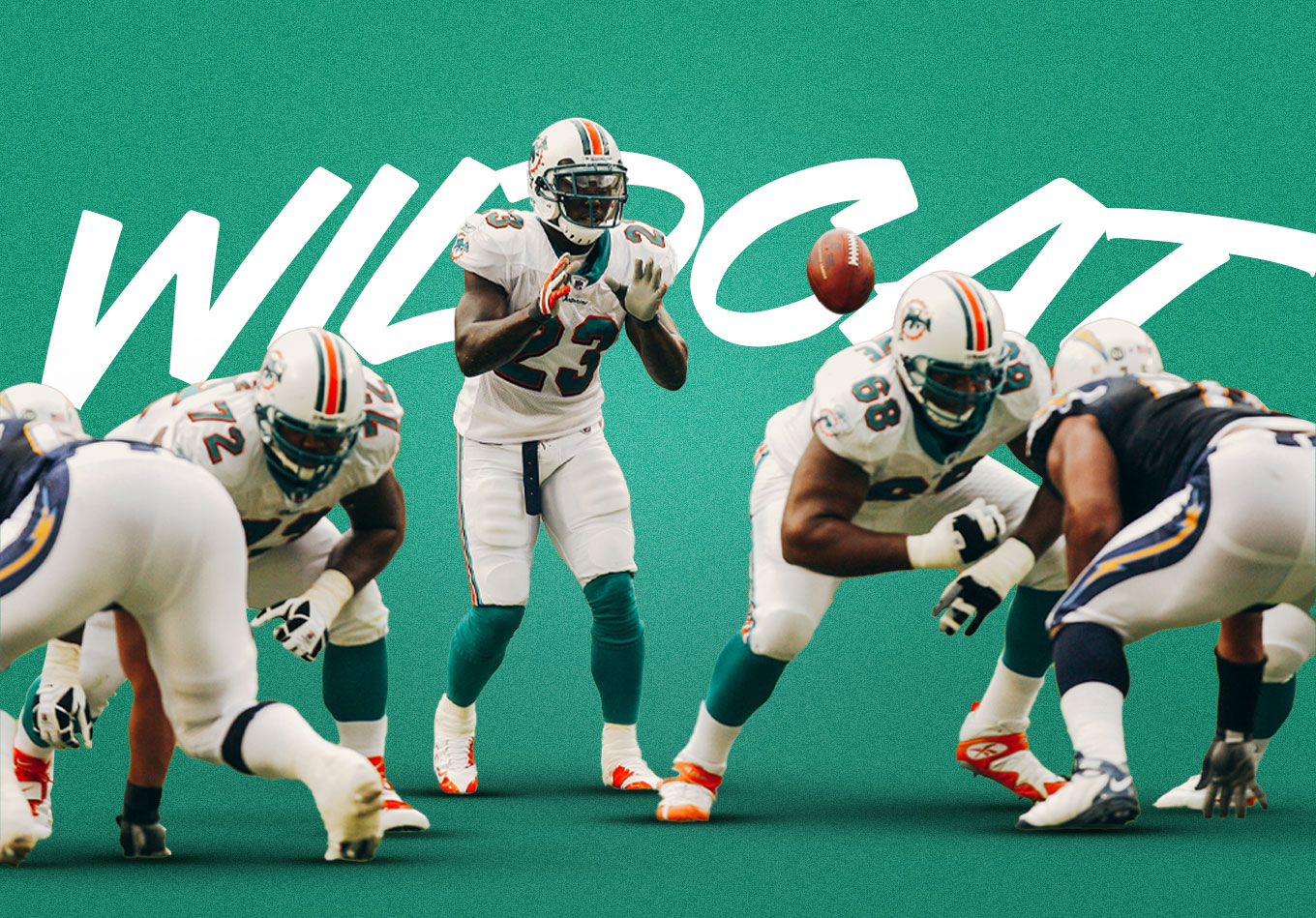 How the Once-Visionary Wildcat Formation Evolved Into the RPO

The Dolphins – losers in 20 of their previous 21 regular-season games – were an afterthought as 12.5-point underdogs on that sunny afternoon. As you might recall, the Dolphins stunned the Patriots 38-13 while introducing the league to the Wildcat, a formation that challenged the conventional structure of an offense and promised to revolutionize the league moving forward.

At least, that’s what some believed at the time.

To say that the Dolphins invented the Wildcat, or even introduced it to the league, is really a misnomer. The play has a rich history. It was included (albeit under different names) in college playbooks at Pitt and Notre Dame in the early 1900s, bears a striking resemblance to the popular single-wing offense of the ’60s and was even discussed in a ’98 scholarly article about the direct running back snap. In reality, the Wildcat is firmly ingrained in football’s past.

However, as Dolphins running back Ronnie Brown broke away on a 62-yard sprint for his fifth touchdown of the game, nobody was thinking about the past. People were thinking only of the future. This was a play that had taken down one of the league’s great dynasties. And a play that had seemingly baffled Bill Belichick, one of the greatest head coaches of all time.

It was a play that gave offenses optionality, big-play ability and short-yardage strength. The Wildcat was surely here to stay.

We may be compelled to ask – what changed? How did the Wildcat offense, the purported formation of the future, become banished to the back page of playbooks? And what have offenses learned from it?

Well, there’s an easy answer to that first question. Not very many players, or teams, were actually good at running it.

As you might have expected, Miami’s Brown and Ricky Williams were particularly adept at it. Elsewhere around the league, Jets wide receiver Brad Smith (a quarterback in college) and Browns return man Josh Cribbs also had success.

Aging backfields and undersized receivers embraced the Wildcat and, in turn, helped create the hype about the formation that perhaps overstated its actual effectiveness.

Outside of those specialists, there’s a distinct lack of high-usage, effective Wildcat rushers. Tashard Choice and Darren McFadden ran the Wildcat for above-average yards per carry but were used sparingly, while DeAngelo Williams and Shonn Greene ran the formation with some regularity but weren’t very effective.

In more recent years, Derrick Henry and Mohamed Sanu (who excelled in the formation at Rutgers) carved out a Wildcat niche for themselves but not in a high-usage role. All-in-all, the vast majority of Wildcat runners have operated at below league-average yards per carry. Even backs as talented as LaDainian Tomlinson, LeSean McCoy and Fred Jackson struggled to have real success in the formation.

An underlying factor as to why league-wide Wildcat success has been difficult to come by is that the play isn’t as innovative as had been advertised. It’s an offense that has optionality only in theory. Just 7.7% of Wildcat plays between 2007-19 were passes and those were generally ineffective, with a completion rate of just 44.7% and an interception rate of 6.8%.

While runs from the Wildcat formation could be varied – through the use of counters, misdirections, and sweeps – they simply stopped fooling defenses over time. This was been particularly true by the time 2019 came around, as Wildcat calls averaged just 3.58 yards per play – the previous low for a season was 4.33 in 2017.

The Wildcat may have seen its last days in the spotlight as a premiere play for NFL offenses, but teams have found it still has value as a trick-play formation and in red-zone sets (think the Philadelphia Eagles’ famous Philly Special from Super Bowl 52).

Here’s an example from Week 1 of 2019 when Carolina Panthers running back Christian McCaffrey scored after taking a direct snap and faking a handoff to quarterback Cam Newton:

The legacy of the Wildcat extends beyond its marginal use in modern game plans.

The very core of the innovation – to provide the offensive team with an equal-man or man-up advantage by (in the case of the Wildcat) eliminating the traditional quarterback position – has become common practice in offenses. For the Wildcat, this man-up advantage has been offset by the defense’s ability to scheme for a relatively rigid offensive play type.

Elsewhere, though, this idea has survived and adapted.

Take the run-pass option (RPO), which became mainstream when Robert Griffin III entered the league in 2012 (some forms of the RPO existed before this, but they were generally not ‘true’ option plays). The RPO works to isolate a single player on the defensive side of the ball and the quarterback reads where that player is going before choosing to hand off or pull back for a pass.

If executed well, the offensive team achieves a man-up advantage for the chosen play type.

That may be because a significant number of quarterbacks across the league have shown proficiency in running the RPO. Mobile QBs who ran the RPO in college have understandably been successful. What may be surprising is that stationary passers have also been effective at it.

The RPO has shown robustness across different players and different playbooks that Wildcat snaps never did. In particular, young quarterbacks like Lamar Jackson, Baker Mayfield and Patrick Mahomes have been successfully running the RPO in high quantities.

This is likely a product of the RPO’s huge influence on the modern college game as well as the quick-read simplicity of the play as the quarterback is only responsible for making a single decision off a defender read.

Below you’ll see Josh Allen of the Buffalo Bills running an RPO in Week 16 of the 2020 season against the Patriots. He waits until the safety hesitates during the run fake before pulling back and throwing the slant:

The RPO also generates legitimate optionality. And more than 12 years after we were introduced to the Wildcat, the NFL appears to have found its new play of the future, and it’s not all that different.

The RPO may be lacking a signature moment – say, Brown’s five-TD game or the Philly Special – but it seems to have the qualities that make a play last.