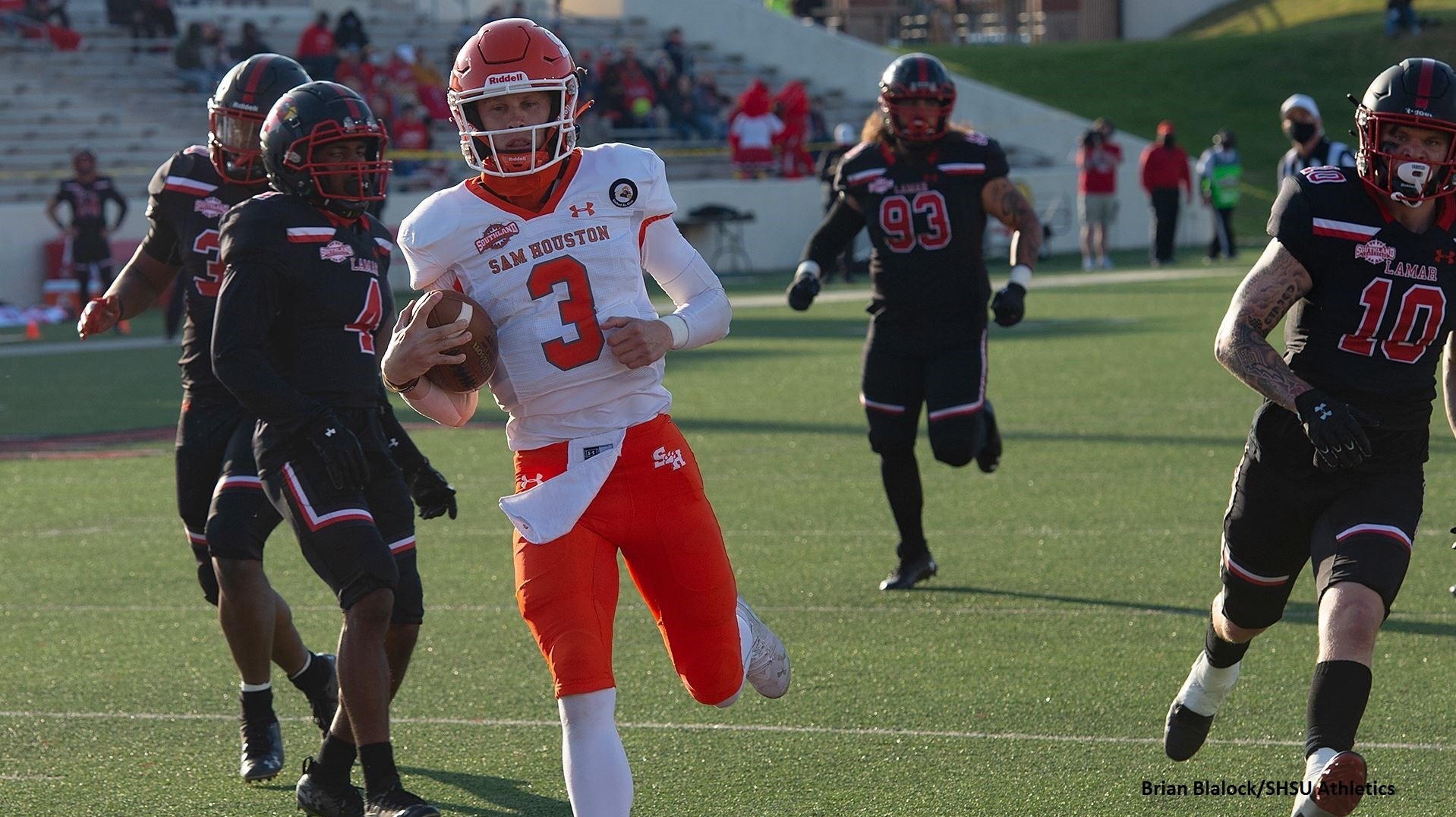 The ASUN and Western Athletic Conference – the two newest FCS leagues – have formed a one-season partnership for this fall to meet the NCAA postseason minimum (six schools) for an automatic qualifier to the national playoffs.

The truth is, the AQ7, or WAC-ASUN Challenge, has strong enough programs that there would be multiple at-large qualifiers to the playoffs even if the two conferences were competing separately. Heading into the season, defending FCS champion Sam Houston (1), Jacksonville State (10) and Central Arkansas (14) are highly regarded in the Stats Perform FCS Preseason Top 25.

Sam Houston is joined by Abilene Christian, Lamar and Stephen F. Austin out of the WAC, while Central Arkansas, Jacksonville State and Eastern Kentucky are ASUN members, with each school playing three home games and three road games. WAC members Dixie State and Tarleton are involved in the AQ7’s joint schedule, but aren’t eligible for the postseason in their second year of NCAA reclassification.

Here’s a preview of the upcoming AQ7 season:

1. Sam Houston (10-0, 6-0 Southland) – Including first-teamers Jahari Kay (defensive end), Zyon McCollum (cornerback) and Jequez Ezzard (punt returner), the national champs tied for the most selections on the Stats Perform FCS Preseason All-America Team with six. The Bearkats, who are sticking to 10 regular-season games and are the lone AQ7 team not facing an FBS opponent, have the best defensive line in the FCS (in the spring, they allowed 2.6 yards per carry and had 37 sacks for 228 yards in losses).

2. Jacksonville State (10-3, 6-1 OVC) – Quarterback Zion Webb replaced an injured Zerrick Cooper for the spring season and now Cooper (8,260 yards of total offense and 78 total touchdowns in 29 JSU games) is back in for an injured Webb. Defensive end DJ Coleman’s 42 quarterback hurries in the last two seasons are dizzying.

5. Eastern Kentucky (3-6, 0-0 OVC) – Linebacker Matthew Jackson seeks to build off a breakout season (79 tackles, including double figures in five of his eight games). Rushing leader Alonzo Booth transferred out of the program, but Parker McKinney-to-Jacquez Jones is a solid passing combination.

6. Abilene Christian (1-5, 0-0 Southland) – The wins have been slow to follow fifth-year coach Adam Dorrel (14-26), who won three Division II championships at Northwest Missouri State, but there are clear opportunities on the home schedule of the Wildcats’ 100th season. On defense, it starts in the middle with burly defensive tackle Quent Titre.

7. Lamar (2-4, 2-4 Southland) – In coach Blane Morgan’s first season, the Cardinals had all new starters on the offensive line and behind center. This time around, signal caller Jalen Dummett and the entire O-line are returning starters. Run defense is a priority after the Cards surrendered 7.2 yards per carry and 20 rushing TDs in six games.

Ineligible Due to NCAA Division I Transitional Period

Dixie State (2-3 Independent) – In their second D-I campaign, the Trailblazers face opponents that in their most recent season had a combined .714 winning percentage (60-24). It helps to return a veteran lineup that features 6-7 quarterback Kody Wilstead, who in his last six games since 2019 has 15 TD passes against zero interceptions.

Sam Houston quarterback Eric Schmid – While oozing clutch ability, Schmid threw for a touchdown in all 10 spring games, including six against Nicholls in the regular season and three versus South Dakota State in the national championship game. Not shy about running from the pocket, he averaged nearly 10 carries per game, finishing with 436 yards and eight TDs on the ground.

Jacksonville State safety Nicario Harper – In his first season at JSU following a transfer from Southern Miss, the 6-foot-1, 205-pound Harper led the Gamecocks with 92 tackles and had four takeaways, including a 64-yard fumble return for a touchdown.

Sam Houston wide receiver/returner Jequez Ezzard – Being undersized at 5-9, 190 works to Ezzard’s advantage because defenders struggle to get a hold of him. His 2,847 receiving yards rank No. 1 among active FCS players and 25 yards per catch over 114 career receptions mark the highest average in FCS history (among qualifiers). He returned two punt returns for touchdowns last season.

As basic as it sounds, being focused is pivotal. The schools are coming off two pandemic-impacted school years, with five of the nine having a short turnaround from a spring season. Plus, some of the schools unfamiliar with playing each other and will be going separate ways after the one-season arraignment.

Abilene Christian at Stephen F. Austin (Oct. 30) – These Texas schools have a nice rivalry going with ACU leading 11-10 all-time in the series and the last two meetings needing overtime.