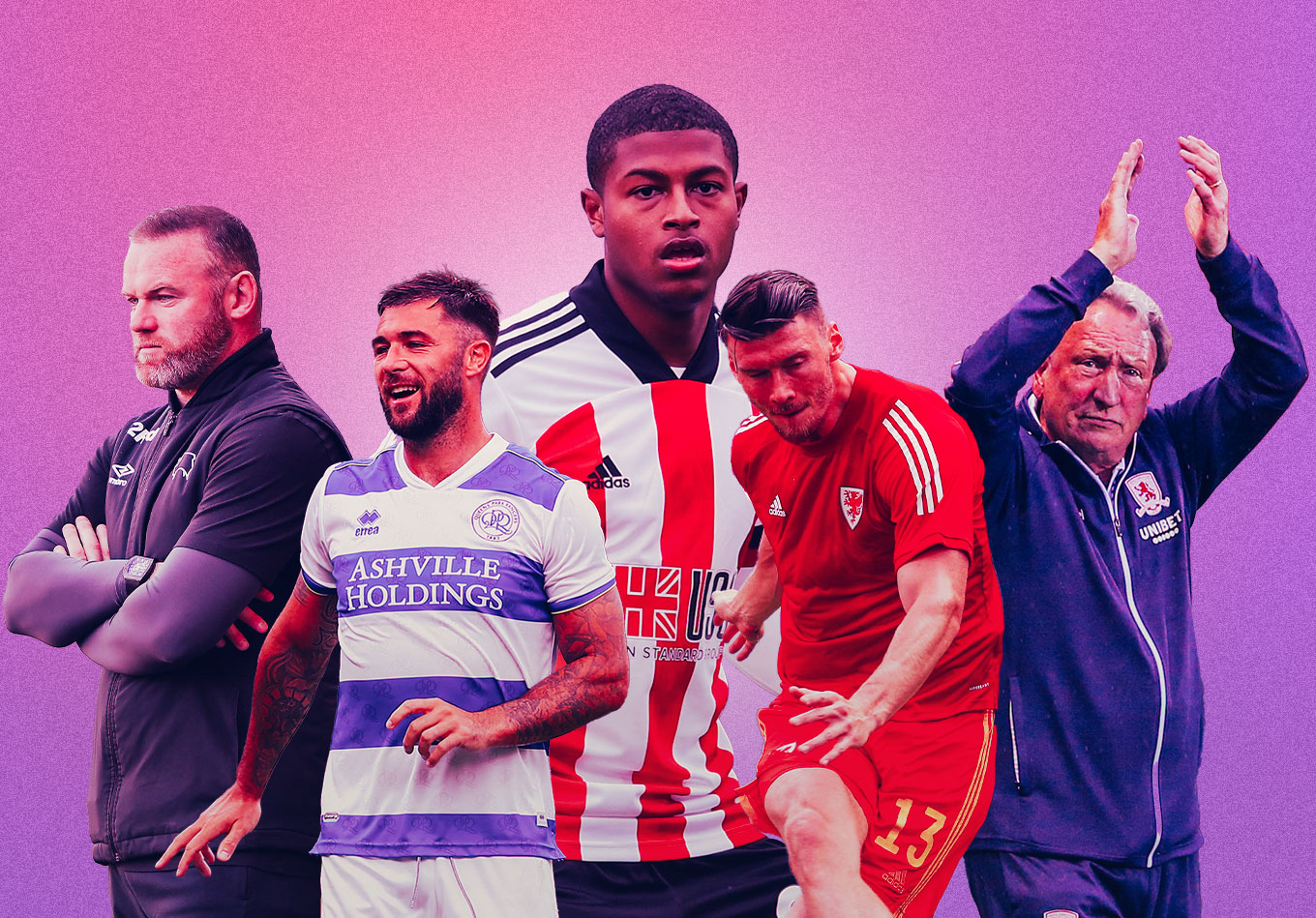 The Most Exciting League in the World? The Championship Returns

The 2021-22 English Championship kicks off on August 6, with Bournemouth hosting relegated West Bromwich Albion. The competition is renowned for it’s competitiveness and unforgiving schedule, but the potential end prize of promotion to the Premier League makes it all worthwhile. We look at some key stories to preview the new season.

Of the 24 confirmed managers set to take charge of a Championship team on the opening weekend of the 2021-22 season, seven of them have previously won promotion to the English top-flight in their managerial careers, amassing a total of 13 promotions combined. Promotion-specialist Neil Warnock has secured passage to the top-flight twice as many times as any other current Championship manager (four), although the division this season does boast a whole host of experienced managers with promotions to their name.

Outside of English football, QPR’s Mark Warburton and Fulham’s Marco Silva have also earned top-flight promotions in their managerial careers. Warburton led Glasgow Rangers to the Scottish Championship in 2015-16 and Silva secured the Portuguese second tier title in 2011-12 with Estoril. Therefore, with nine of the 24 managers in this season’s Championship having previously achieved a top-flight promotion in any country, it bodes well for an exciting and tightly contested race to the Premier League.

With the likes of Ivan Toney and Teemu Pukki earning promotion to the Premier League, Cardiff City striker Kieffer Moore will be one of those eyeing up the Championship Golden Boot this season.

The towering striker is coming off the back of a career-defining campaign in which he scored 20 goals in the Championship, his best return in the Football League. To cap off a fine season, Moore also featured for Wales at Euro 2020, bagging himself a goal versus Switzerland in the group stage.

In 2020-21, Moore was the first Cardiff player to score 20+ goals in a league campaign since the late Peter Whittingham in 2009-10. Moore can occupy defenders anywhere on the pitch and if the service into the box is right, he can be devastating, netting all 20 of his goals inside the box. Indeed, five of Moore’s 20 goals in 2020-21 were headers with only Ivan Toney (six) scoring more in the Championship. Unsurprisingly, Moore won more aerial duels (439) and attempted more headed shots (44) than any other player in the second-tier last season.

It’s been far from easy for Moore to reach this point in his career, with plenty of ups and downs along the way. However, with his stock rising with every appearance and the striker fully established at international level, Cardiff will be hoping he can improve upon last season’s excellent total and fire the Bluebirds into promotion contention.

With six games remaining last season, Sheffield United suffered the joint-earliest relegation in Premier League history, alongside Ipswich Town (1994-95), Derby County (2007-08) and Huddersfield Town (2018-19). It was a miserable year for the Blades as they ended the campaign in 20th with just 23 points to their name. Indeed, they became the first team to finish as high as ninth in the Premier League and be relegated the following season since Birmingham City (ninth in 2009-10, relegated in 2010-11).

However, with Slaviša Jokanović installed as manager, Sheffield United will be hoping he can be the man to turn the tide and make an immediate return to the Premier League. The Serbian comes into the steel city with an excellent record at Championship level, earning two promotions to date. In 2017-18 he guided Fulham to the promised land via the playoffs and in 2014-15 he took Watford up, finishing in second place. Should Jokanović guide United to promotion this season it will be the first time they have directly followed relegation from the top-flight with promotion in the next campaign – no mean feat at all.

The Blades not only have excellent Championship pedigree in the dugout but also on the field too. They are well stocked for second tier experience and crucially have a set of forwards accustomed to finding the net at this level. Their current forward line has scored a combined 237 goals in the Championship (including play-offs), with skipper Billy Sharp accounting for 114 of those strikes.

It will also be fascinating to see if Rhian Brewster can break his Sheffield United duck, with the young striker suffering under the pressure of a big money move in a struggling side. Brewster has failed to score or assist in 30 appearances in all competitions since moving from Liverpool.

Despite Brewster’s poor start to life at Bramall Lane, Blades fans can take solace in the fact that his only spell in the Championship (including playoffs) in 2019-20 was a productive one. Brewster scored 11 goals from an expected goals total of just 8.4, demonstrating his potential to be an efficient finisher. His stint in the Championship was in stark contrast to his Premier League numbers in 2020-21, where he was afforded very few quality chances to score (1.8 xG), possibly owing to a mixture of poor service from his teammates and ineffective movement from Brewster. However, with a clean slate under a new manager in a division below, it could well be the tonic needed for Brewster to restore his confidence and show off his true abilities.

Queens Park Rangers were the Jekyll and Hyde side of the Championship in 2020-21, with their form before the turn of the year a complete contrast to their fortunes in 2021. In dark depths of December, QPR were languishing two points above the relegation places with 21 points from 22 games.

QPR failed to win any of their eight league games in December 2020, which was the most league games they’ve played in a single month without winning in their history and it was fair to say Mark Warburton was on the brink. However, a gutsy draw versus Norwich at Carrow Road pointed to potential green shoots of recovery. The board backed Warburton in the transfer window with four key loan signings (Charlie Austin, Stefan Johansen, Jordy De Wijs, Sam Field) which helped propel the club to a ninth-place finish.

The additions of Charlie Austin and Stefan Johansen were especially crucial in turning the season around and only promoted pair Norwich (53) and Watford (54) won more points in the Championship than QPR (47) in 2021. The experience and quality of Austin and Johansen were transformative on and off the pitch for a young squad bereft of confidence.

Austin found the net eight times, taking his tally to 56 goals in 110 games for the club, while no QPR player created more chances for the R’s than Johansen since his debut in February (34). This summer QPR have moved quickly in the window. They’ve secured all four previous loanees permanently, while also adding the likes of Sam McCallum, Jimmy Dunne, Andre Dozzell and Moses Odubajo to further strengthen an already solid squad.

There’s real stability at QPR now, with Warburton set to begin his third campaign with the club, becoming the first manager to start three consecutive seasons since Ian Holloway in the early 2000s. Gone are the wild free-spending days, with QPR now re-positioned as a club that will help develop players en-route to the bigger and better things.

The slick passing identity Warburton has tried to instil in his time at Loftus Road is bearing fruit. Among the Championship teams that were above the league median for passes-per-sequence in 2020-21, QPR were the team who had the highest direct speed, essentially becoming the most direct version of the higher pass-per-sequence sides, which made for an enjoyable watch. If they can continue their momentum from last season, it could be fun ride for the club who are growing from strength to strength.

Many will be casting an eye on the progress of Wayne Rooney and his Derby County side this season, with Rooney’s reputation and Derby’s off-field issues proving to be everlasting talking points in the football world. It has certainly been a mixed time for Rooney as Derby manager. Derby won nine of their first 18 league games before enduring a shocking run of form that almost cost them relegation into League One.

That poor run saw Derby (seven) win fewer points than any other Championship side in their final 15 games of the regular 2020-21 campaign. Worryingly, they ended the season just one point and place above the relegation zone and were very much at the hands of the EFL this summer as to whether they would be further penalised with a points deduction or even relegation owing to financial issues.

Looking at the broader picture of last season, Derby did show certain improvements during Rooney’s tenure compared to their start under Phillip Cocu, although it is hard to ignore the collapse of form at the end totally. Rooney will need to inspire his team again like he did during his first 18 games in charge where the Rams were more solid at the back, keeping nine clean sheets and conceding just 12 goals in the process.

Overall, Derby seemingly simplified their game under Rooney, making fewer passes-per-game and having less possession but were still more effective at both ends of the pitch in terms of scoring more and conceding fewer goals.

It is hard to say if the new season will be a clean slate for Rooney and Derby especially with the EFL casting a looming shadow over their summer preparations. They will, however, be leaning on any experienced players at the club on the opening weekend. One of those will be veteran striker Colin Kazim-Richards, with the former Turkish international having a hand in more league goals than any other at the club last season (eight goals, two assists). In fact, Kazim-Richards was also directly involved in more open-play sequences that ended in a goal for Derby (11), highlighting his importance to the way they attacked last season.

As a result of their punishment from the EFL, Derby are very limited in the transfer market this summer making it extremely tough for Rooney to supplement his squad effectively. It could be a long season ahead for the Rams and with Rooney still honing his managerial skills on the job, it could really go either way for the former Manchester United and England legend this term.