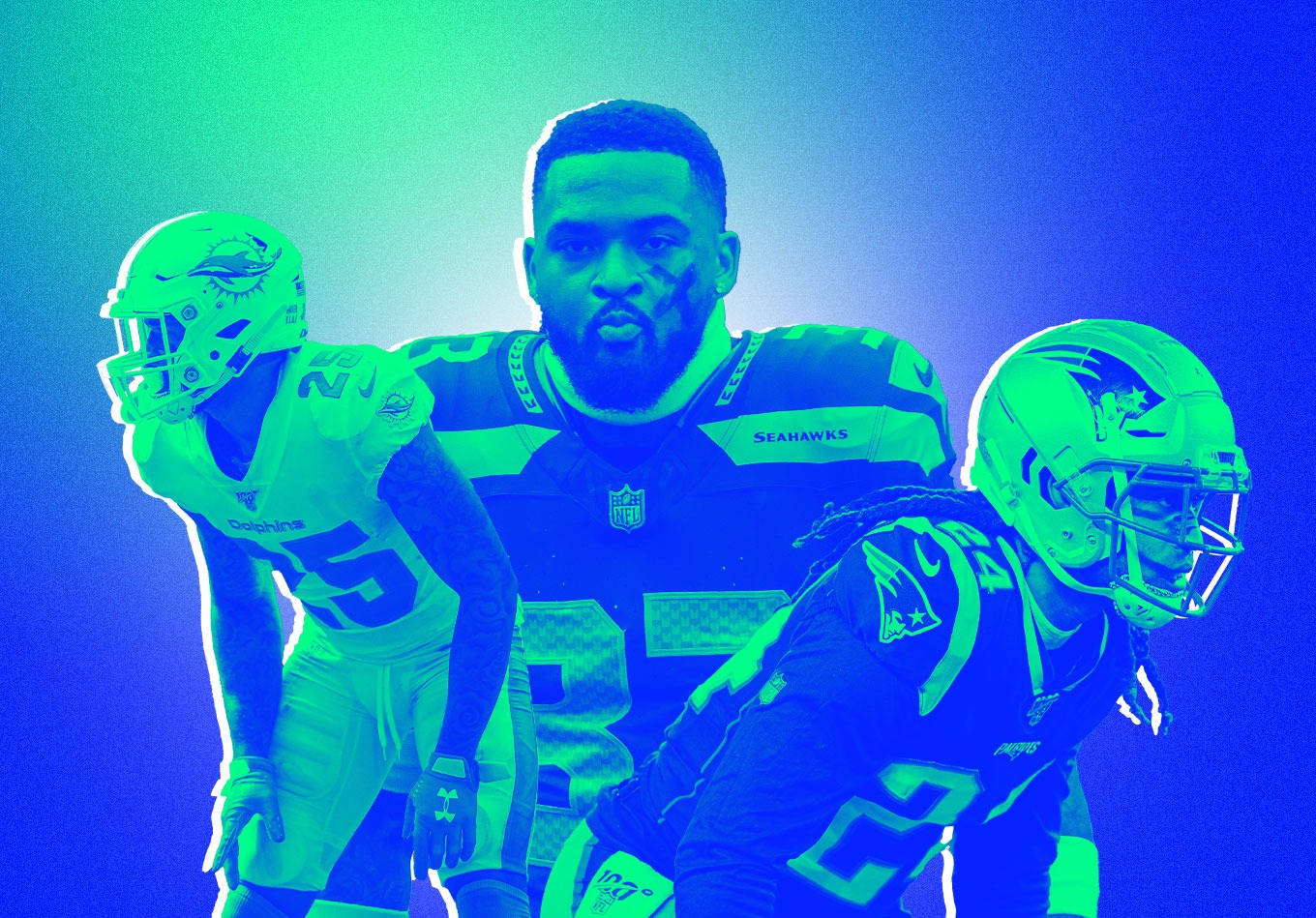 Which Holdouts Have Built the Best Cases for a New Contract?

Several high-profile NFL players are holding out of training camp for new deals. We examine which players deserve lucrative contracts the most.

It wouldn’t be an NFL offseason without some contract controversies.

Though the two most recent collective bargaining agreements have made it more difficult for players to hold out, several teams are still approaching the start of training camp needing to resolve issues surrounding players unhappy with the terms of their current deal.

Aaron Rodgers’ continued self-enforced exile has cast a shadow over the offseason, but his staring contest with the Green Bay Packers is not tied to his level of compensation.

For four big-name defenders who skipped mandatory minicamp – though Jamal Adams was permitted to do so due to personal reasons – it is indeed about the money.

New England Patriots cornerback Stephon Gilmore said recently to ESPN: “I just want what I’m worth, however that plays out. Every player should be paid what they’re worth. That’s just how it is.”

But what is the worth of Gilmore and the three other high-profile defensive players? And should the teams in question make the effort to sign them to more lucrative deals?

We looked at the advanced metrics surrounding each player to assess the best course of action for their respective franchises.

Gilmore’s demand to be paid what he is worth may strike some as bemusing from a player who carries the highest salary cap hit among cornerbacks ($16.27 million) and missed five games in a down year.

However, his wish is more likely related to his base salary rather than his overall cap number. Gilmore is due $7 million in base salary in 2021, half of what Byron Jones of the Miami Dolphins, whose $14 million base salary is the most among corners, is scheduled to receive next season.

Though 2020 was a disappointing year for Gilmore and the entire Patriots defense, he has a strong case for narrowing that gap to Jones.

While he only managed one interception and three pass breakups, Gilmore still had the edge over Jones in several metrics. His adjusted open percentage, which measures how frequently an opponent got open against a defender’s coverage, adjusted for position, was 24.18 compared to 26.16 for Jones.

Though both spent time playing as inside corners, both Gilmore and Jones are primarily outside defenders and there was a contrast between the two when they lined up at that spot in 2020. Gilmore allowed a burn – when a receiver wins his matchup on a play where he is targeted regardless of whether the pass is catchable – on 50% of his targets, compared to 60.4% for Jones.

The Patriots used a lot of their salary cap space on a free-agency splurge hoping that will get the team back in contention. However, given Gilmore’s past level of performance – since signing with New England in 2017, he has racked up 52 pass breakups, tied for sixth-most in the NFL, and 11 interceptions – they might be wise to find a way to negotiate a contract with an increased base salary for a player whose unadjusted open percentage of 46.6 was fourth among outside corners in his last full season in 2019.

Like Gilmore, Howard may also be comparing his contract to that of Dolphins teammate Jones, whom Miami made the highest-paid cornerback in the NFL with a five-year, $82.5 million deal in March 2020.

Howard still has four years left on a deal paying him over $15 million a year, but the All-Pro will have his eyes on a contract closer to Jones’ average annual value of $16.5 million.

Such compensation would unquestionably be deserved given Howard led the league in interceptions for the second time in three seasons in 2020 by picking off 10 passes.

His adjusted open percentage of 25.19 was almost a full percentage point better than that of Jones, and he had a significant edge in burn yards per target, though Howard was not exactly impressive in that category, giving up an average of 11.12 while playing on the outside.

Yet that number is likely more reflective of how often the Dolphins left Howard in single coverage. Indeed, Howard’s average depth of target of 14.5 yards speaks to the frequency with which he was given the task of staying in tight coverage with a receiver downfield.

The Dolphins aren’t flush with cap room – Miami sits just over $5.5 million under the 2021 cap – but, in a year where the team will be expected to make a year-three leap under head coach Brian Flores, identifying a method by which to keep Howard happy is the smart move.

With a league-leading 18 interceptions in the past three seasons, Howard is a playmaker the Dolphins need on the field and motivated if they are to challenge in the AFC.

Having long since angled for a lucrative extension even before his blockbuster trade to the Seahawks last offseason, Adams is finally in line for his payday at some point this year.

Still playing on his rookie contract and due to earn close to $10 million in 2021, Adams will have designs on becoming one of the highest-paid safeties in the NFL.

Justin Simmons of the Denver Broncos is the safety with the top contract, his average annual salary coming in at over $15 million, but a better comparison for Adams may be division rival Budda Baker of the Arizona Cardinals ($14.75 million).

Baker and Adams each spend a significant amount of time in the box and down near the line of scrimmage and the latter’s representatives will base much of their argument in negotiations around him leading the Seahawks in sacks with 9.5 last year.

Yet, they may struggle to make a compelling case when the discussion turns to his skills in pass coverage.

Adams finished the 2020 season with an adjusted open percentage of 24.94, comfortably below that of Baker, who had the fourth-best mark among all NFL defenders at 16.38. A disparity that big would, on the surface, make it tough to justify Seattle giving Adams a deal akin to that of Baker.

But after surrendering two first-round picks to pry Adams from the Jets, the Seahawks have locked themselves into a situation where they have no choice but to pay him. Though he has proven himself a playmaker near the line of scrimmage, his performance in coverage should lead Seattle to try to ink Adams to a deal with eye-catching headline numbers but a team-friendly structure.

Due to earn $15.5 million in base salary and carry a $20.8 million cap hit in the final year of his contract in 2021, Jones’ desire to receive the compensation he believes he is due before his deal expires is likely motivated by the Cardinals’ decision to sign J.J. Watt to a two-year, $28 million deal this offseason.

Watt remains an ominous presence on the defensive line, but – now 32, with a checkered injury history, and having posted nine sacks in 24 games over the past two seasons – his signing is a gamble by the Cardinals, and Jones may be wondering why they did not instead invest in keeping him around.

Jones has been the picture of consistency for the Cardinals, posting double-digit sacks in each of his first four seasons with Arizona before a torn bicep cut his 2020 campaign short after five ineffective games.

The Cardinals’ reluctance to pay the 31-year-old now is understandable given that recent injury, but Jones will feel he has already proven himself dependable heading into 2021 and is more deserving of a new deal than several of his fellow edge rushers who have already received paydays this offseason.

In his last full season in 2019, only one edge rusher, Cameron Jordan (70), had more pressures where he beat a pass protector than the 69 Jones produced.

Watt had 51 such pressures in 2020, Shaquil Barrett received a $17 million-a-year contract from the Tampa Bay Buccaneers after producing 53, and Leonard Floyd was paid $16 million a year by the Los Angeles Rams after beating a man on 39 pressures.

Those deals complicate matters for the Cardinals, who might have to choose between paying a player they may not trust to stay healthy and potentially shipping out the most productive pass rusher in their recent history.

The obvious solution is a new deal laden with playing-time incentives that rewards Jones for staying healthy. If that cannot be done, then the Cardinals could possibly soften the blow of losing him by getting a few 2022 draft picks to help them restock their defense by trading Jones to the highest bidder.