Hunting for Gold: Does FRACAS Project Collin Morikawa to Stay Hot at the Tokyo Olympics? | The Analyst 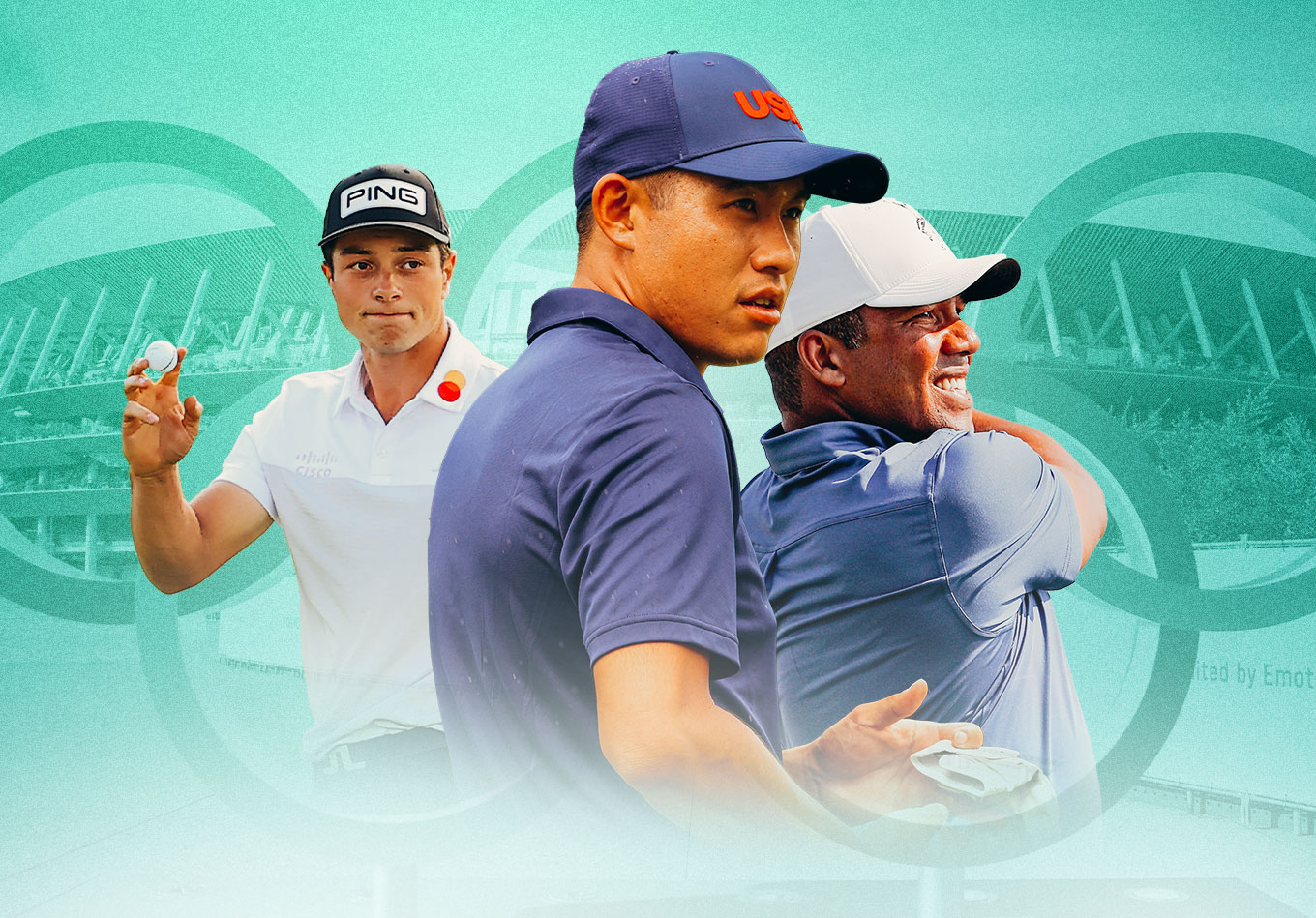 Hunting for Gold: Does FRACAS Project Collin Morikawa to Stay Hot at the Tokyo Olympics?

The field for the Olympic men’s golf competition is remarkably strong.

It’s not World Golf Championships strong, but it does have a median FRACAS of 0.71 strokes better than an average PGA tournament. The forced withdrawals of Bryson DeChambeau and Jon Rahm weaken the field a little, and we would have loved to see Santiago Tarrio take Rahm’s place over Jorge Campillo, but the field remains a good group.

With plenty of names from lesser tours, it’s also a tournament where our FRACAS values will be particularly useful. Of the players in the field, only Udayan Mane of India has fewer than 16 recorded rounds in our database. Players like Norway’s Kristian Krogh Johannessen and Germany’s Hurly Long are both top-200 players in the world per FRACAS, but they haven’t appeared in any major tournaments until now and are mostly unknown to the public.

The Olympic competition is hosted by Kasumigaseki Country Club. The course has not been used for international competition, so we must make some inferences about how it will play using yardage and quotes from people on-site. It’s a “long” par 71 at 7,447 yards, and we put “long” in quotes because the course has six very long holes and 12 short-medium holes.

In other words, there’s length but it’s not the prevalent hole type on the course. That’s most clear when looking at the par 4s, where there are six that play 420 yards or less and three that play 499 yards or more. While it isn’t projected to be a particularly difficult course, it does look like it will take some imagination to hit the required shots.

Fresh off a major win at the Open, Collin Morikawa is firing on all cylinders and is the model’s pick to win gold.

He currently trails only Jordan Spieth and Rahm in FRACAS’ world rankings and is the strongest player in this field by almost half a stroke. It also looks like he’ll be an excellent fit for this course. He’s the best in this field on short par 4s and long par 5s, which encompasses eight holes, and his weaknesses are long/easy par 4s and easy par 5s, of which there are only two on this course. Of the top four in projected win percentage, only Morikawa has a positive course fit at Kasumigaseki.

Not only is Morikawa our FRACAS pick to win, but we also think he’s somewhat of a value play. We have Morikawa with a 6-1 chance to win, a decent value over the 7-1 in the market.

Continuing with the worldwide youth movement in golf, Viktor Hovland is our highest value pick not named Morikawa.

After being forced to withdraw from the U.S. Open with a bad case of sand-in-the-eye, Hovland won in Germany the following week and then finished tied for 12th at the Open. He’s had plenty of spike weeks and a few letdowns, but overall he’s been steadily improving since the start of this year.

The consensus odds have Hovland at 11-1 to win gold, but we think it should be more like 9-1.

Morikawa and Hovland may be the only favorites to like but looking a little further down the board there are two players we like as longer-odds winners who could also finish in the top five.

Venezuela’s Jhonattan Vegas had a frustrating 2020, but he’s been far more consistent in 2021. He’s missed just one cut since the start of February with a trio of second-place finishes. One of those was last week at the 3M Open where he finished fourth in Strokes Gained: Tee to Green and was one of just eight golfers to gain two or more strokes both off the tee and on approach.

His putter is almost always his downfall, and if it turns into a putting contest, he isn’t likely to perform well. But it’s looking as if ball-striking will be key, Vegas is striking it well now. Our model has his chances for gold at 35-1, much higher than the 50-1 offered by the consensus. We also have him at about 11-2 odds to finish in the top five and he’s being listed around 17-2 in the consensus market.

Chile’s Mito Pereira has been a fixture in this column since before his promotion to the PGA Tour. After a rough debut at the Rocket Mortgage, he’s followed up with a 34th, fifth and sixth and is doing almost all of it with stellar ball-striking. In those three tournaments, he’s averaging almost 7.0 Strokes Gained: Tee to Green and is absolutely bombing it off the tee. His course suitability comes out about average for this tournament. Pereira has played in each of the past four weeks, but after working his way up through the PGA Tour Latinoamerica and the Korn Ferry, he’s familiar with grinding out start after start.

Since the start of May (right after the big dip on his chart) he’s put together round after round of impressive golf. Like Vegas, he’s a long shot to win gold in Japan at 43-1, but we do like his odds of a top-five and top-10 finish. We have him at a little over 6-1 and 3-1 in those markets, respectively. The consensus odds put him at 11-1 and 4-1 with those same props.

Norway’s Kristian Krogh Johannessen is coming in with the fifth-highest odds in the consensus market at 419-1 to capture the gold medal. Our own model puts his odds at 209-1 to win and just 20-1 to finish in the top five but looking at his odds to finish in the top 10 and 20 is where we can find how undervalued he is.

We have KKJ as the 28th-best player in this field, far from fifth to last. We like his chances more than popular names on the world stage like Henrik Norlander, Thomas Pieters and Si Woo Kim. We have 55 rounds for KKJ in our database and he’s shown steady improvement since the start.

In this competition, we give Johannessen about a 36% chance to finish inside the top 20 or odds of 14-5. The consensus is offering odds of around 9-2, meaning they think he’ll finish in the top 20 only about 22% of the time. That’s some massive value for KKJ this week.

We evaluate players at the percentage of time they appear in the top 10% of DraftKings in our simulations, while also setting a floor on which players qualify. Additionally, we’re comparing expected times in the top 10 vs. expected, relative to salary, to pick which players we are interested in.

With only 60 players in the field, no cut, a clear group of elites, and a big drop-off to the next level of golfer, this week will be peak stars-and-scrubs and projected ownership will be a huge consideration for us.

At the upper levels, ownership almost doesn’t matter. We’re happy to eat chalk with the best players in the world and find our lineup differentiators at the lower salaries, though Reed offers a bit of an ownership discount and has thrived in the past when representing his country.

Similar story here as Viktor Hovland will almost certainly be the highest-owned golfer, but we’re fine playing him.

Guido Migliozzi is our best value in this range, but he drops out of our picks due to projected ownership. We’ll instead pivot to Tommy Fleetwood and Marc Leishman, though we’ll be using all four of these players sparingly.

Here is the range where ownership will really dictate what we do. Jhonattan Vegas and Mito Pereira are by far our highest valued plays, but with ownership for both likely eclipsing 20% we’re out on both. The $6,000 range is probably where we’ll throw our darts, but Thomas Detry and Jazz Janewattananond will be sprinkled in as well.

This range is what will make playing the top golfers much easier. There’s great value to be had with Adrian Meronk, Kalle Samooja, Hurly Long and Kristian Krogh Johannessen and none of the four are likely to be more than 5% owned.

The week after a major is often a chance for second-tier players to make a little noise and gain some valuable ranking points.

Cameron Champ once again took advantage, netting his third PGA win in as many years. Champ had only one top-20 finish in 2021, but he rode a hot putter to find the winner’s circle. He gained 8.5 strokes on the greens while finishing just 27th in Strokes Gained: Tee to Green. As a result, Champ saw a massive jump in FRACAS, moving up 208 spots to 180th in the world. That’s low for a PGA tournament winner, and we’re not sure his success is here to stay.

Elsewhere in the world, Nacho Elvira won on the Euro Tour in a playoff over Justin Harding. Like Champ, Elvira was also searching for form, missing nine cuts in his previous 11 tournament appearances. It was a limp to the finish, and FRACAS considers his poor performances in Rounds 3 and 4. Overall, he climbed 325 spots, moving up to 372nd in the world. We’re also cool on Elvira maintaining his success.

On the Korn Ferry Tour, Dylan Wu took home the victory and secured his PGA Tour card for the 2022 season, moving up 175 spots to 161st in the world. Taylor Moore finished runner-up and is currently the most intriguing projected Korn Ferry graduate. Moore currently sits at 31st in the world with finishes of ninth, ninth, 24th, third, MC (missed cut), 26th, fifth, seventh, first and second in his last 10 tournaments. Even playing against weaker competition, that kind of sustained success is rare. He’s one we’ll have our eye on next season.

Within the top 100, Mikko Korhonen saw the biggest rise, moving up 92 spots to 78th in the world. Justin Harding finished runner-up in Europe, continuing a run of strong play and now sits at 38th in the world.