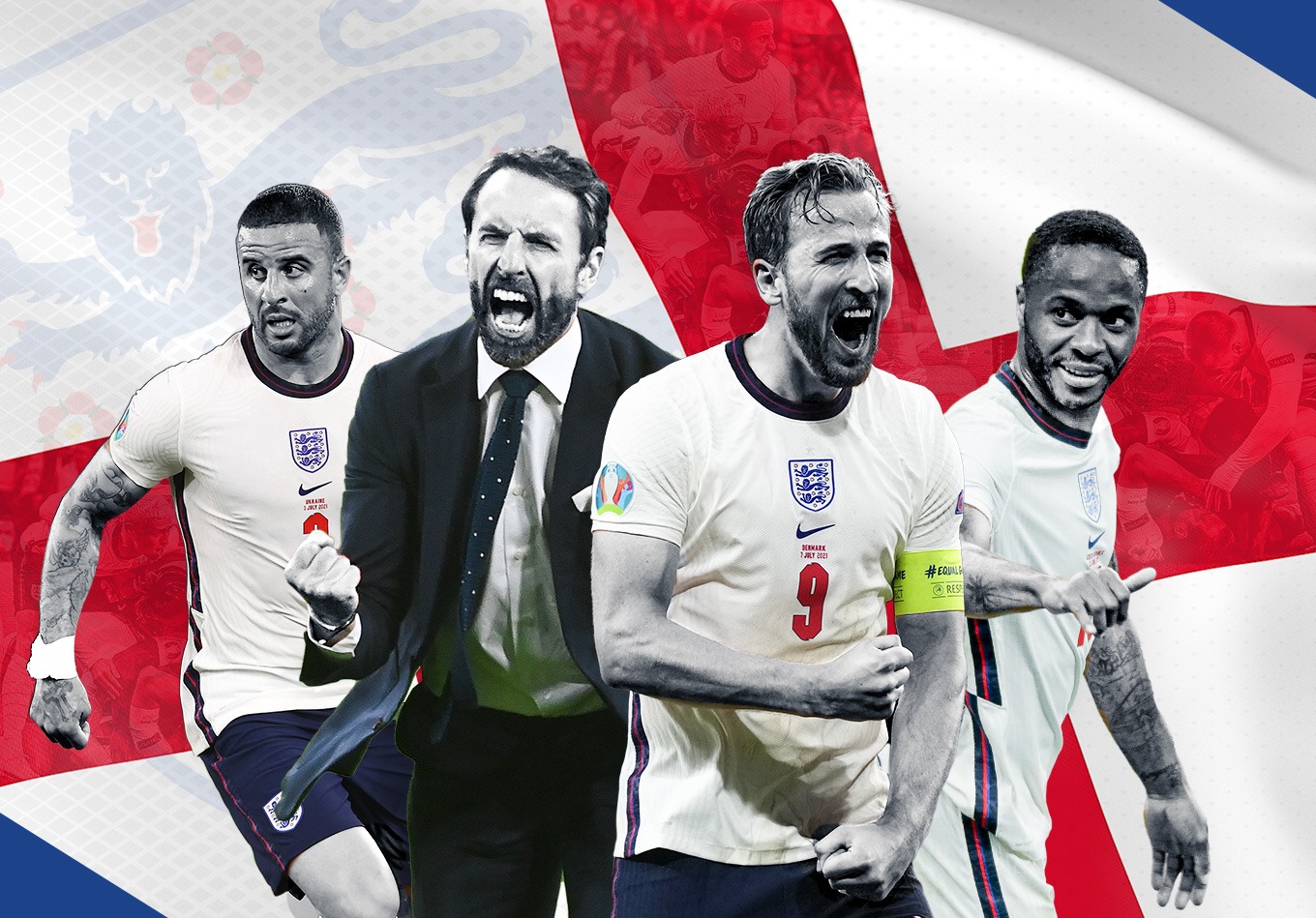 The 3 Minutes That Defined This English Generation

Joakim Maehle, a threat all tournament from left-back – albeit one that had been nullified all night by an effervescent Kyle Walker – finally gets on the ball in the final third and hoists a dangerous cross towards England’s back post. The crowd holds its breath. Please, no.

They needn’t have worried.

Harry Maguire rises highest and heads it behind. Because of course he does. Until tonight he hadn’t lost a header all tournament, and the nine he won against Denmark is the most of any England player at Euro 2020 in one game so far.

But still, the danger looms. Daniel Wass stands over the corner. Lee Dixon wobbles ‘Come on England’. He tries to sound confident. But the tremor in his voice belies the truth: it’s a desperate plea, a prayer.

He needn’t have worried. England clear the corner, with that man Walker heading away the danger.

Denmark come again. It’s Maehle, dribbling, driving, carrying towards to heart of the England defence. He glides past one, two, three. Fingernails have gone. Hands are covering eyes. Fans in Wembley and up and down the country have had enough drama.

We needn’t have worried.

Walker explodes forward and dispossesses his opposite number. The clock ticks to 116:20.

And then something amazing happens. For 2 minutes and 41 seconds, England do not lose the ball. They make 54 consecutive passes, knocking the ball around with all the ease of a training drill. Every single player touches the ball. The ball goes from right to left to right again, pulling the tired, spent Danes across the park.

Chants of ‘Olé ring out at Wembley, and at pubs up and down the country. Olés. In a semi-final. With England playing. What is going on? Who is this team we’re watching?

That sequence of 54 passes is the longest possession at Euro 2020 so far, eclipsing a 43-pass move from Germany against Portugal in the group stages. Third on that list? England’s 42-pass moves against both Croatia and Ukraine. Tiki Taka? No, more like Tiki Saka.

This is Gareth Southgate’s team. This is an England team in complete control, playing with total confidence. Of course they sense the pressure, the weight of expectation from a nation so deprived of the very thing it loves above all else. But this is a side that embraces that pressure, harnesses it. They trust themselves, their manager, the process.

The process told them substituting Jack Grealish was the right thing to do. It was a big call. Bring on an extra defender, swap to five at the back and hold firm. Grealish became the third England player to be both subbed on and subbed off in a match at a major tournament, after Jamie Redknapp (vs Scotland in Euro 1996) and Aaron Lennon (vs Portugal in the 2006 World Cup). Both those tournaments had rather unhappy endings. This story goes on.

We’ve come a long way. And the numbers show it too.

In the last five minutes of the match, England had 75% possession. They’ve averaged just shy of 54% in the tournament so far. In extra-time they completed 90% of their passes.

And the sheer number of them? Travel back to the hit-the-channel Badlands of the early 2000s and explain this England team and no-one would even be able to comprehend it.

We should not have been surprised. England have displayed this type of sure-footed assuredness all tournament. An unrelenting calm amongst a relentless media storm.

There was always that niggle. The ‘what happens if England go behind?’ question. Tick it off, it’s been answered.

Even after going behind in a match of this magnitude, England did not panic. The response was calm and measured. The team knew they were the better side, it would come. It did. And in doing so, England broke another curse. Winning a European Championship knockout game after going behind for the first time ever. This generation are built different.

With this victory, this team make history and they break history. The nation’s first ever European Championship final. Their 37 games (including this match) was the most any team had played in the competition without ever reaching the final.

It’s the longest gap between major finals for any European nation (55 years). And now, just like that, it’s over.

We have not seen this for a long, long time. One game to go. One more step to take.