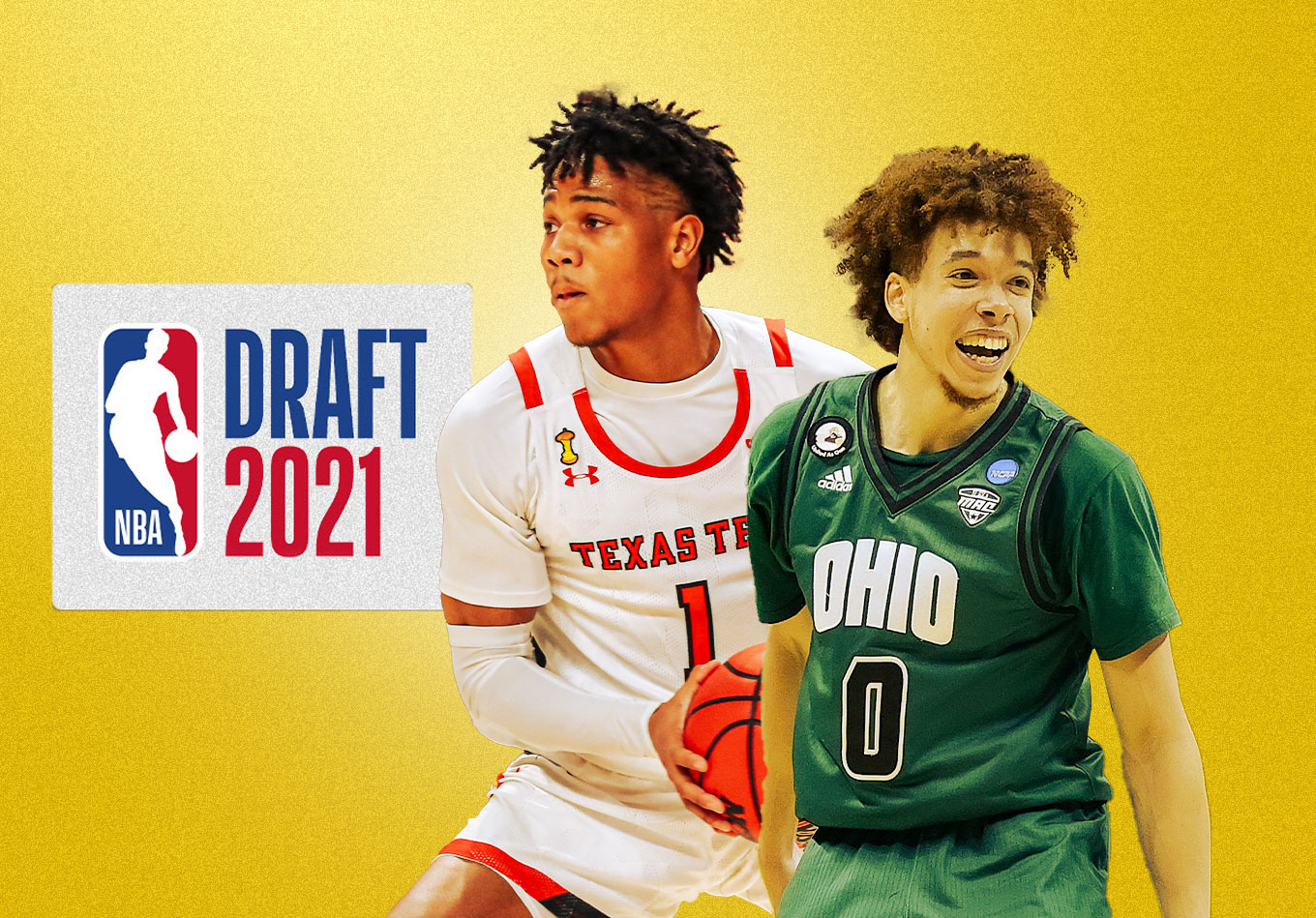 The Draft Files: A Look at the Biggest Withdrawal Deadline Decisions

The draft is a mere three weeks away and the NCAA withdrawal deadline has come and passed, granting us further clarity on the 2021 NBA Draft player pool.

Following the G League Elite Camp, NBA Combine, and a slew of agency pro days in Chicago, many prospects testing the waters were finally faced with making the decision whether to remain in this year’s draft or withdraw and return for another year of college hoops.

Using our NBA Draft model and new AutoStats data, we’re diving into some of the most consequential decisions made in the 72 hours that led up to the draft withdrawal deadline.

Our draft model is derived from an array of volume- and rate-based statistical inputs, consensus draft rankings and biographical/anthropometric information to determine where a prospect stands relative to his peers in the class.

And as we mentioned in a previous analysis, AutoStats leverages AI-enhanced body recognition technology to identify player position and movement across the entirety of the court without the need for in-venue technology. The tool collects comprehensive tracking data from any game through any television broadcast, expanding the depth of information available to be collected for prospect analysis and comparisons.

Preston’s rise from an unheralded recruit averaging about 2.0 points as a high school senior to a legitimate NBA Draft prospect is an incredible underdog story.

The versatile initiator was one of only two consensus top 100 prospects in the 2021 draft class to average at least 7.0 assists and 7.0 rebounds this season.

The two-time All-MAC selection continued to showcase his well-rounded game at the NBA Combine, where he was one of only five prospects to accumulate more than seven rebounds and seven assists throughout the course of five-on-five scrimmages and posted the highest true shooting percentage of that group:

Preston had been testing the draft waters under the guidance of Roc Nation Sports, which is among the shortlist of NCAA certified agencies. While there remains high variance as to how Preston is valued among NBA front offices, he’s gained enough believers in his upside as a late-blooming playmaker with high IQ, feel, vision and potential to realize a sharp development curve early in his NBA career.

While his consensus ranking currently sits in the late 40s, that will likely creep up as more intel flushes through mock drafts and big boards. Expect Preston to be firmly in the mix for a guaranteed contract and potentially receive late first-round looks.

A former top 50 recruit, Wiggins has been on NBA radars for quite some time. He endured some struggles throughout his first two seasons in College Park, but made a notable leap this season as a junior.

Wiggins was among the most impressive prospects at the G League Elite Camp, putting up 23.9 points per 36 minutes on a red-hot 69.3 true shooting percentage and certainly looking the part of an NBA-caliber wing. This strong showing earned Wiggins a call-up to the NBA Combine, where he recorded the fourth-fastest shuttle run (3.0 seconds) and sixth-fastest three-quarter court sprint (3.04 seconds).

With his draft stock on the rise, Wiggins’ decision to stay in the draft and capitalize on his momentum seems wise. He’s poised to warrant second-round looks and likely ends up on a two-way contract.

As an undersized upperclassman that lacks length and athleticism, Alvarado wasn’t on many NBA radars heading into the season. However, the Brooklyn native forced teams to pay attention and played his way into draft consideration. Alvarado earned ACC Defensive Player of the Year honors and furthered his reputation as one of the toughest, most competitive players in America. But what do the numbers say?

Alvarado, who signed with Octagon while testing the NBA Draft waters, is the most prolific backcourt agent of defensive chaos in the draft class, ranking first among all consensus top 100 prospects in steal percentage (a historically strong indicator of prospect translatability) by a significant margin:

This certainly isn’t a statistical blip, as Alvarado has eclipsed the 3.0 steal percentage threshold each year of his NCAA career.

For a historical perspective, over the past 10 NCAA seasons, only three players between 6-foot and 6-foot-2 have posted greater than a 4.0 steal percentage, 20.0 assist percentage, 37.0 3-point percentage and 80.0 free throw percentage:

Alvarado lived up to this reputation at the G League Elite Camp, knocking down tough crunch-time shots and racking up seven combined steals and blocks during scrimmage play – tied for the most at the event.

Alvarado’s path to sticking in the NBA will likely parallel those of fellow hard-nosed, defense-oriented guards like Carter and McConnell. Whether or not he ultimately hears his name called on draft night, his decision to stay in the draft was warranted and he has a real chance to stick.

Onu, the NAIA shot-blocking machine who we profiled as a sleeper to watch, tested the NBA Draft waters under the guidance of NCAA certified agency Beyond Athlete Management. After seeing through the process, working out with numerous teams, receiving feedback from NBA decision-makers and weighing all of his options, Onu decided to forgo a potential high-major grad transfer and keep his name in this year’s draft.

His upside as both a stretch big and rim-protector places him firmly in the two-way contract wheelhouse and potentially in the mix for a late second-round selection.

Bagley proved a difficult prospect for NBA executives to get a solid feel for due to a small sample of meaningful scouting opportunities. He wasn’t thought of as a potential one-and-done prospect until COVID-19 came about, limiting potential opportunities to showcase his talent at typical springtime prep showcase events following a breakout season as a high school senior. Once he got to Tempe, his freshman season was cut short due to injury with only 350 total minutes played.

That small sample size coupled with his election not to participate in five-on-five combine scrimmage action ultimately produced too much uncertainty and risk for front offices to be comfortable taking a swing on Bagley in a range that he’d be willing to stay in the draft.

As a big, fluid wing with a smooth jump shot, he’ll certainly be a rising sophomore to monitor ahead of the 2022 draft.

Versatile wings are en vogue in the NBA and Shannon certainly made some notable strides as a 3-point shooter this season, but it wasn’t enough to boost his draft stock to a level commensurate with remaining in the draft as an early entrant.

While Shannon has shown proclivity as an opportunistic cutter, slasher and effective mover without the ball, he lacks juice as an on-ball self-creator. Per AutoStats, 33.8% of Shannon’s isolation chances resulted in a turnover – by far the worst mark of all collegiate NBA Draft early entrants with at least 30 isolation chances. The average mark is 6.2%.

While he measured in with a less than a three-inch wingspan differential, Shannon is a functional athlete with a good sense of team defensive concepts and projects well on that end.

As a very young sophomore (younger than the likes of Evan Mobley, Jalen Suggs, and Sharife Cooper), Shannon could very well boost himself into first-round consideration in the 2022 NBA Draft if he’s able to show continued incremental offensive improvements as a junior.

Abmas had some of the worst anthropometric measurements and athletic testing results of all attendees and struggled mightily throughout five-on-five scrimmage action. Abmas knocked down only one shot and his 18.8 field goal percentage throughout the scrimmages was the second-lowest mark at the combine.

While he may have struggled shooting the ball, offense certainly isn’t what holds Abmas back as a prospect. His small frame and lack of athleticism lead to significant struggles on defense, particularly when it comes to fighting through ball screens.

While it will be tough sledding to try to recapture this season’s March Madness magic without Kevin Obanor (the Robin to Abmas’ Batman) next year, Abmas can certainly work on the holes in his game to show NBA evaluators that he’s more than just a dynamite mid-major scorer.

While Juzang has pedigree as a big-time high school recruit and went on an absolute heater throughout UCLA’s Final Four run, many question marks still remain as to his translatability to the NBA.

While his pull-up jumper is a force to be reckoned with, he is often over reliant on difficult shot-making because he lacks the athletic juice to get to the rim.

Per AutoStats, among consensus top 100 NBA Draft prospects with at least 70 drives, Juzang notched the second-lowest percentage of drives resulting in shots near the basket.

Lowest % of Drives Resulting in Shots Near Basket, Top 100 Prospects

What stands out about Juzang among this group is that he towers over his peers that struggle getting to the rim. At 6-foot-7, this is an alarmingly low frequency.

Juzang also had a suboptimal showing in Chicago, tallying the second-worst true shooting percentage among all NBA Combine attendees that participated in scrimmage action.

While it often makes sense to cash in one’s draft stock chips after a memorable March Madness run, Juzang’s decision to return to a loaded UCLA team with legitimate title aspirations appears to be a wise one.

If he can shore up his defensive consistency and improve his explosiveness in getting to the rim, he has a chance of improving his standing as a 2022 NBA Draft candidate.

Aldama, who has been firmly on NBA radars since earning MVP honors at the 2019 FIBA U18 European Championship, absolutely dominated Patriot League competition in a COVID-shortened sophomore campaign.

Lacking complementary talent, he nearly willed a well below .500 team to the NCAA Tournament, falling short in the conference championship game. On the morning of the NCAA withdrawal deadline, Jon Rothstein reported on Aldama’s intent to turn pro:

This vaguely worded report notably doesn’t specify intent to remain in the 2021 NBA Draft. This begs the question as to whether Aldama, a Spanish native, will follow the less than conventional path of signing a (likely lucrative) professional contract overseas, withdrawing from the current draft, and becoming auto-eligible for the subsequent draft.

This approach would mirror that of Filip Petrusev, who left Gonzaga following his sophomore season. He tested the 2020 draft waters, withdrew his name, signed with KK Mega Soccerbet of the Adriatic League and became auto-eligible for the 2021 draft.

This path was rather effective for Petrusev, who was able to showcase previously subdued aspects of his game in Serbia en route to Adriatic League MVP honors and a notable boost in his draft stock. But what should Aldama do?

While the level of competition wasn’t the stiffest, Aldama’s production was off the charts. Aldama was one of only two NCAA Division-I players to average 20.0 points and 10.0 rebounds (Terry Taylor, Austin Peay) this season.

Unlike Petrusev’s sophomore campaign, Aldama was given the green light to fire away as a stretch big, knocking down 36.8% of his 5.1 3-point attempts per game. He’s the only consensus top 100 prospect to attempt five or more 3s per game and block at least 1.0 shot per game.

Aldama also showed some intriguing passing flashes at his size. He is one of only three early entrants standing at least 6-foot-11 to average more than 2.0 assists, with USC’s Evan Mobley and Utah State’s Neemias Queta being the others.

The stats only version of our NBA Draft model values Aldama as a mid-to-late first-round pick, well above his consensus draft standing.

Aldama has until July 19 to clarify his intentions.