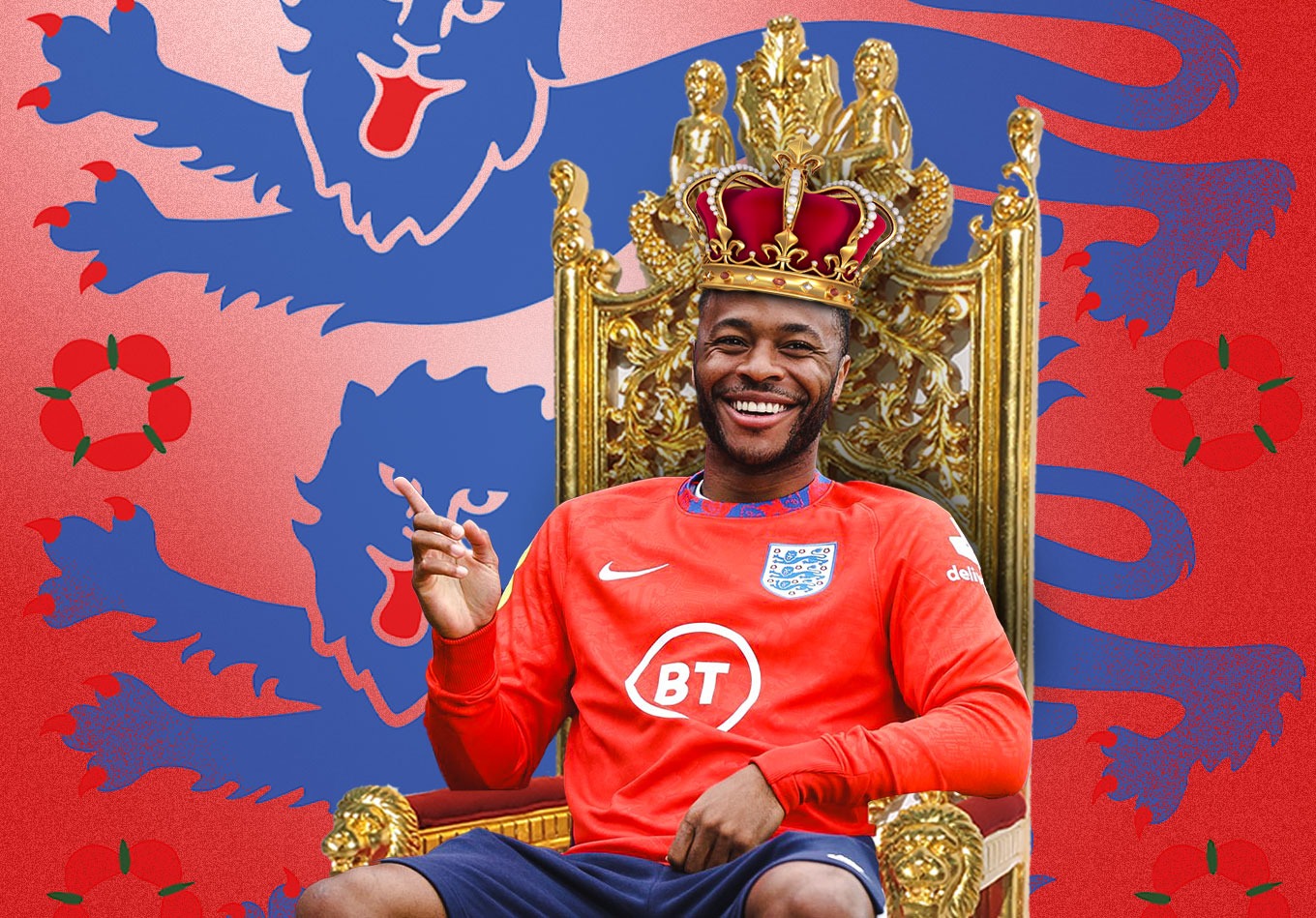 Raheem Sterling: Heavy is the Head That Wears the Crown

It’s only been five years since Raheem Sterling was infamously labelled as a ‘footie idiot’ by an English tabloid newspaper. As a data analysis site, we’re not here to delve into the background of the suspect treatment that Sterling has received in the press over the years – you all know that story. This instead looks at how an extremely talented footballer has vindicated his selection by inspiring England to the final of Euro 2020, leaving the country on the cusp of its first major title in 55 years.

Sterling made his England debut in November 2012 against Sweden. A remarkable 4-2 defeat in which Zlatan Ibrahimovic scored all four of the Swede’s goals, Sterling debuted for the Three Lions alongside Steven Caulker, Leon Osman, Ryan Shawcross, Carl Jenkinson and Wilfried Zaha. Sterling (67 caps) has gone on to make nearly 10 times as many appearances for England than those other five combined (7), but it didn’t always look like it would end up this way. He had to wait another 16 months for his second England cap and then went on to be harshly sent off in only his fourth cap, following a tussle with Antonio Valencia in a humid 2-2 pre-World Cup friendly against Ecuador. This red card meant that at the time he was the least experienced England player to be sent off in an international, while being just the second-ever in a non-competitive match for the Three Lions after Trevor Cherry in a 1977 friendly with Argentina.

In hindsight, Sterling’s England debut and subsequent 16-month absence from the international football scene was probably a good thing. He’d only played 896 minutes of top-flight league action for Liverpool ahead of the defeat to Sweden and at 17 years and 342 days old became just the fifth player in English men’s national team history to feature before turning 18.

Fast forward to the present day and Sterling is the most-capped player in England’s Euro 2020 squad. The semi-final win over Denmark was his 67th cap, four more than the next most-experienced player Jordan Henderson (63). All this despite being only 26 years old. Of the nine players to be capped 100+ times for England men’s team, only Wayne Rooney was younger when playing in their 67th international for the Three Lions than Sterling was in the semi-final (26 years, 211 days). There’s every chance he could go on to break Rooney’s outfield appearance record, and maybe even Peter Shilton’s all-time total of 125.

Sterling has been one of the best players at Euro 2020, there’s little doubt about that. His match-winning performances carried England through the group stages, he then scored the opening goal against Germany, assisted Harry Kane’s first against Ukraine and won the penalty against Denmark that, eventually, sent England to the final on Sunday. But for his England career to reach such a high, Sterling has had to endure the lows.

He played all three games in England’s embarrassing 2014 World Cup experience, where they exited the group stage with just one point, before enduring more disappointment two years later at the European Championships where Roy Hodgson’s side exited in the Last 16 to a harder-working Iceland team. These exits were far from Sterling’s fault, but he bore the brunt of criticism from a section of England fans and very public concerns were raised for his state of mind following the loss to Iceland in 2016. Labelling himself #TheHatedOne on Instagram following the 1-1 draw with Russia in the opening game, to being withdrawn at half-time of the second game versus Wales after being booed by supporters in the ground and then being left out of the third group game altogether.

Coming into England’s UEFA Nations League tie against Spain in October 2018, Raheem Sterling hadn’t been able to convert his impressive Premier League form into anything on the international stage across his 45 caps for the Three Lions. Sterling remains the eighth youngest English player to reach 50 Premier League goal involvements, something he achieved over a year before this match in Seville, but for England he’d produced two goals and nine assists in 45 appearances at a rate of one every 271 minutes. Then it all changed.

His two goals against Spain helped a very impressive England to a 3-0 lead inside 38 minutes. Spain scored twice after half-time, but England held on and Sterling’s performance against one of the strongest teams in European football was widely praised. His opening goal in the 16th minute ended a run of 1,825 minutes and 27 games without scoring for his national team and lifted a huge weight from Sterling’s shoulders.

In the 22 games starting from that victory in Spain, Sterling has been involved in 22 goals, scoring 15 himself and assisting seven more. Over that time, Harry Kane is the only England player with more goals (19), assists (9) and goal involvements (28) and the pair are the only two to have reached double figures in terms of the latter metric.

Coming into Euro 2020, Sterling’s form at domestic level had dropped enough for his starting position in the team to again come into question – even more so when coupled with other great options in the two forward positions alongside Harry Kane that Gareth Southgate had at his disposal.

His 24 goal involvements for Manchester City in 2020-21 across all competitions was his lowest tally since Pep Guardiola arrived at the club in 2016-17, while he’d never created fewer chances for teammates in a season for City than he did last season (53). He was also struggling to find great goalscoring positions that he’d become so well known for under Guardiola’s management, with his lowest non-penalty expected goals per 90 rate in a Premier League season at the club since 2016-17 (0.37), while his creative spark had abandoned him with just 0.19 expected assists per 90 – another top-flight seasonal low across the same period. Even for England, since the start of the 2020-21 season to before Euro 2020, Sterling’s output had escaped him slightly, with two goals and no assists in five appearances of 404 minutes of playing time. This culminated in his starting place in England’s tournament opener against Croatia being one of the major talking points alongside the decision to play right-footed Kieran Tripper at left-back and Kalvin Phillips’ first-ever tournament appearance in central midfield. As has often been the case, Southgate’s choices proved to be correct.

Four weeks on, the derision caused by Sterling’s selection in the front three for England against Croatia feels laughable. Sterling scored England’s only two group stage goals, with winners against the Croats and the Czech Republic followed up by a goal, while overall at the tournament he’s been the biggest English threat with a combined xG and xA total of 5.0.

Sterling’s ability to strike fear into opposition defenders with his rapid acceleration and ability to change direction in a split-second have made him an ideal weapon in the English attack. He’s both attempted (32) and been successful with (18) more take ons than any other player at Euro 2020, with nine of these coming in the last match against Denmark – the most by a player in a single European Championships game since Eden Hazard vs Hungary at Euro 2016 (12). Another take on would have been added to this count had he not been fouled in the action when winning the penalty on Wednesday night. The decision was undoubtedly on the soft side but came about because of Sterling’s quick feet and positive running.

For a team that relies on wide players to create the bulk of chances, England need Sterling to be on song. Just 25% of England’s attacking half touches against Denmark came in the middle third of the pitch, a ratio that was even lower against Ukraine in the quarter-final (16.8%) and versus Germany in the previous round (22%). Southgate has shown the trust he holds in him to provide this threat, as he’s been the only consistent wide player in every game at the tournament so far, with Bukayo Saka, Jack Grealish, Jadon Sancho and Phil Foden being swapped as the third player in the front three with Sterling and Kane. Sterling’s been on the pitch for 91.4% of possible minutes at Euro 2020 and it was easy to see why, when in extra time at Wembley on Wednesday night, he was still making lung-busting runs to create chances for both teammates and himself despite the heavy legs.

Sunday’s final against Italy won’t be make or break for the 26-year-old – he should have already earned the right to be considered one of the best players that England have had this century. Earlier this year he was recognised by the Queen in her annual birthday honours, being awarded an MBE for his services to racial equality in sport. Hopes and dreams of glory this weekend are certainly ranked higher than expectation this weekend – England fans are used to experiencing disappointment after all. But should the England men’s team do what they haven’t achieved for 55 years since the 1996 World Cup victory, Raheem Sterling’s crowning as one of the most important players in the nation’s history will be complete.