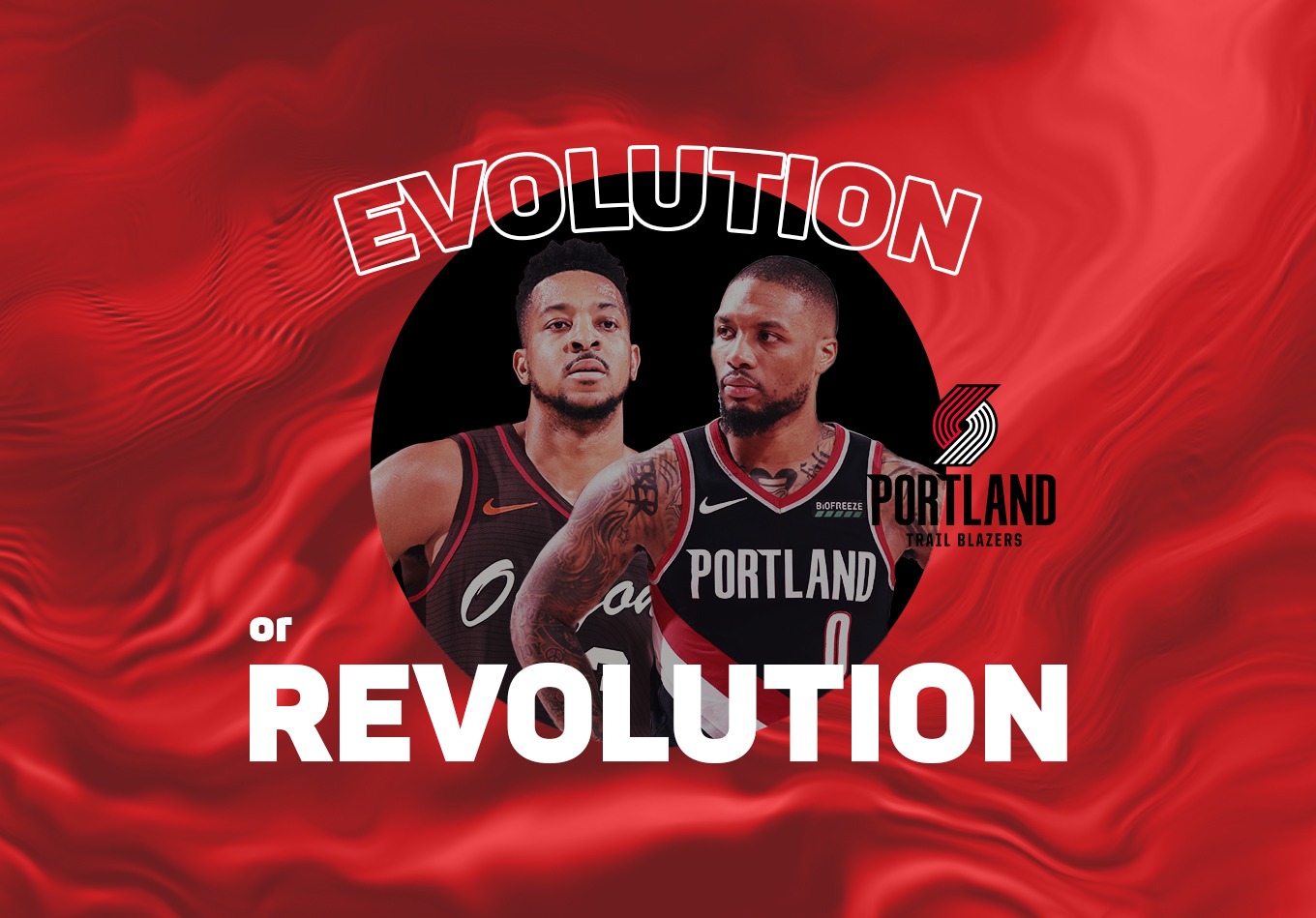 Has the Clock Struck 12 on Dame Time in Portland?

Evolution or Revolution is a series that analyzes whether a team needs a few tweaks or a fundamental reboot. This edition focuses on the very different routes the Trail Blazers could take this offseason.

We’ll listen to arguments for newly crowned Finals MVP Giannis Antetokounmpo and the Milwaukee Bucks, but is there a current NBA star who’s as synonymous with the franchise he represents as Damian Lillard and the Portland Trail Blazers?

Nine seasons in Rip City, six All-Star appearances, six All-NBA selections, 743 combined regular season and playoff games, 743 starts. The reputation as one of the most clutch shot-makers the league has ever seen. That signature scowl that occurs after another buzzer is beaten, the facial indicator that Dame Time has just taken place.

But more than all that, Lillard has adopted Portland and the Pacific Northwest as his home. It’s truly hard to imagine the Oakland native playing anywhere else.

But after a second consecutive first-round exit, Dame’s time in a Blazers uniform might finally be running short. Terry Stotts is gone and first-time coach Chauncey Billups is in his place, a coaching search Lillard, apparently, did not enjoy.

So what’s next in PDX? Are there tweaks to be made to return this roster to the state of contention, where it resided two seasons ago prior to a Western Conference finals loss to the Warriors? Or is it time to truly shake things up and disband one of the most offensively effective small backcourt duos the league has seen?

Does Lillard Finally Want Out?

Lillard is currently off in Tokyo trying to lead Team USA to a fourth consecutive gold medal, but that doesn’t mean all is quiet as it relates to his stateside future.

Lillard signed a four-year, $196 million supermax extension two summers ago, and he’ll be earning well north of $40 million per season in the final three years of a deal that includes a player option in 2024-25. Earlier this month, one report suggested that Lillard would request a trade in the upcoming days. Lillard denied that while training for the Olympics in Las Vegas, but gave a press conference in which he demanded that Portland’s front office “be more urgent” in changing the roster.

“I haven’t made any decision on what my future will be,” Lillard said, which is a stark contrast to the comparisons he made to his desire to emulate Dirk Nowitzki’s one-team tenure with the Dallas Mavericks upon signing the supermax in 2019.

But two years is a lifetime in the modern NBA landscape, and a pair of early playoff exits with, essentially, the same cast of characters can be frustrating for one of the league’s best players while fellow superstars join forces around the league.

Let’s pretend Lillard does want out and Portland decides to accommodate him. Where could he end up? There aren’t exactly a ton of realistic options if you assume that the Blazers will try to do right by their franchise icon. Lillard obviously wants to contend, so sending him to Oklahoma City for Shae Gilgeous-Alexander and half of the draft picks in the Thunder’s treasure trove of assets isn’t something the Blazers would likely do.

At the same time, pairing him with a contender gets tricky. If Portland’s in full rebuild mode, they’ll want young players with upside and picks, which few championship-caliber teams even have to offer. And any contender who does deal for Lillard would run the risk of leaving its cupboard completely bare and depleting its roster, making a title run tricky even after acquiring a superstar.

A report Tuesday suggested that the Heat, Kings, Knicks, Rockets and 76ers have been the most aggressive teams in inquiring about Lillard’s availability. Of that list, only Philadelphia fits the list of a) contender, and b) a team with anything resembling a core piece they’d be willing to part with – and even that prospect depends on how you feel about Ben Simmons.

Maybe a sort-of hometown reunion with the Warriors for the Oakland native (some combination of the Nos. 7 and 14 picks, James Wiseman, future picks) or a chaos-inducing pairing with Nikola Jokic (a currently injured Jamal Murray or Michael Porter Jr. plus a pick or two)?

If Lillard goes, the rest of the roster is open for business as well. Even if he doubles down on his former desire to be a Blazer lifer, there’s a good chance CJ McCollum won’t be back.

What Could McCollum Bring in Return?

McCollum has averaged 20 points in six consecutive regular seasons and six consecutive postseasons, which isn’t bad for an undersized shooting guard who was the 10th pick in the 2013 NBA draft from a Patriot League school.

But that lack of backcourt size, paired with a similarly sized guard in Lillard who isn’t exactly known for playing lockdown defense, has led to some significant vulnerabilities. Portland has gone from a mediocre defensive team at the beginning of the Lillard-McCollum marriage to a downright awful one the last two seasons.

Now, that’s certainly not just a McCollum problem. In fact, the Blazers gave up only 112.8 points per 100 possessions with him on the floor, and his plus-6.2 overall rating was second on the team behind Jusuf Nurkic (plus-6.9).

As good as he is offensively, McCollum has never made an All-Star team. It’s unrealistic to think he can be the second-best player on a championship-level club, yet he’s Portland’s most attractive asset not named Lillard.

Perhaps a Simmons-McCollum deal materializes, but the Blazers would likely have to surrender additional assets, and McCollum probably isn’t the Portland guard that the 76ers would target anyway. Would the Pacers be interested in McCollum and a young player for something like Myles Turner and T.J. Warren? Would the Pelicans offer Brandon Ingram? Those options make sense from a salary standpoint and the talent is probably close enough that those teams would consider it, but McCollum is always going to be a tough sell as a true difference-maker for any team that might have interest in acquiring him.

The Cost of Norman Powell

The Blazers shipped Gary Trent Jr. and Rodney Hood to Toronto at the trade deadline for Powell, who was in the midst of a career season with the Raptors.

But after averaging 19.6 points on 64.5% true shooting with Toronto, Powell’s numbers slipped to 17.0 points per game and 57.6% true shooting in the Pacific Northwest. Still solid – particularly for a guy who earned $10.8 million – but not quite as needle-moving as his Raptors production.

Now, Powell is about to get paid. He told Yahoo Sports that he’ll turn down his $11.6 million player option and become an unrestricted free agent Aug. 1, and he’ll be one of the top available wings in a fairly unimpressive market.

The Blazers have Powell’s Bird rights, so they can exceed the cap to sign him – which they can and should do, even if it’s costly. Powell may be looking for a contract that pays him around $20 million per season, which will likely put Portland in the luxury tax, but there’s not really another choice. If the Blazers let him walk, they don’t have a viable replacement. It would hurt even worse after giving up a legitimate asset in Trent for him just a few months earlier.

Portland would still wind up over the cap even if Powell went elsewhere, leaving just the $9.5 million taxpayers’ mid-level exception to replace him. The Blazers don’t have leverage here, especially considering the need to appease Lillard. Paying Powell is a no-brainer.

There were 30 five-man lineups that played at least 200 minutes together this season, when injuries and health and safety protocols threatened much of the league’s continuity. Of those units, the Blazers’ most common starting five – Lillard, McCollum, Powell, Nurkic and Robert Convington – had the ninth-best defensive rating (104.8) and was plus-13.4 per 100 possessions in its 370 minutes together.

That’s outstanding, but the wheels tended to fall off defensively when the bench was significantly involved. Two of the primary culprits – Carmelo Anthony and Enes Kanter – are free agents. Derrick Jones Jr. is a solid defender but mostly fell out of the rotation once Powell came aboard. Zach Collins, the team’s 2017 first-rounder who has played 11 games in the last two seasons and just had surgery on his latest injury, may never play in the league again.

Anfernee Simons looks like he can be a rotation player in the backcourt, and Portland will have to hope Nassir Little can make a similar jump toward contributing in his third season.

The biggest needs are on the wing and up front, though the Blazers may opt to bring Kanter back. Daniel Theis or Nerlens Noel could be options for mid-level exception money.

This one comes with a big caveat. If Lillard truly wants out, this is going to be a blow-it-up-and-start-over revolution. They’ll get the best possible package they can for their superstar and then look to deal some of their other veteran pieces to fully align with the teardown.

More likely, it’s a somewhat minor revolution as Portland tries to thread the needle to keep contending. It’s already underway with Billups replacing Stotts, and he’ll focus on making the Blazers a more defensive-minded team – much like those he led during his days in Detroit. That’s going to take a significant amount of work.

Lillard may want big changes, but the roster and cap situation leaves Portland without much room to swing for the fences. The Blazers should see what kind of deal is out there for McCollum and try to pair Lillard with a bigger backcourt mate who doesn’t mind playing at both ends.

Unless Lillard is ready to leave the only NBA home he’s ever known, much of this roster is probably going to look similar. That’s OK – trading a 20-point per game scorer to try to find one or two other significant rotation pieces still qualifies as a monumental offseason move.

The Lillard-McCollum pairing has been loads of fun to watch for the past six seasons, but it’s time to change it up.