Getting Defensive: Can the Timberwolves Find The Elusive Path to Playoff Contention? | The Analyst 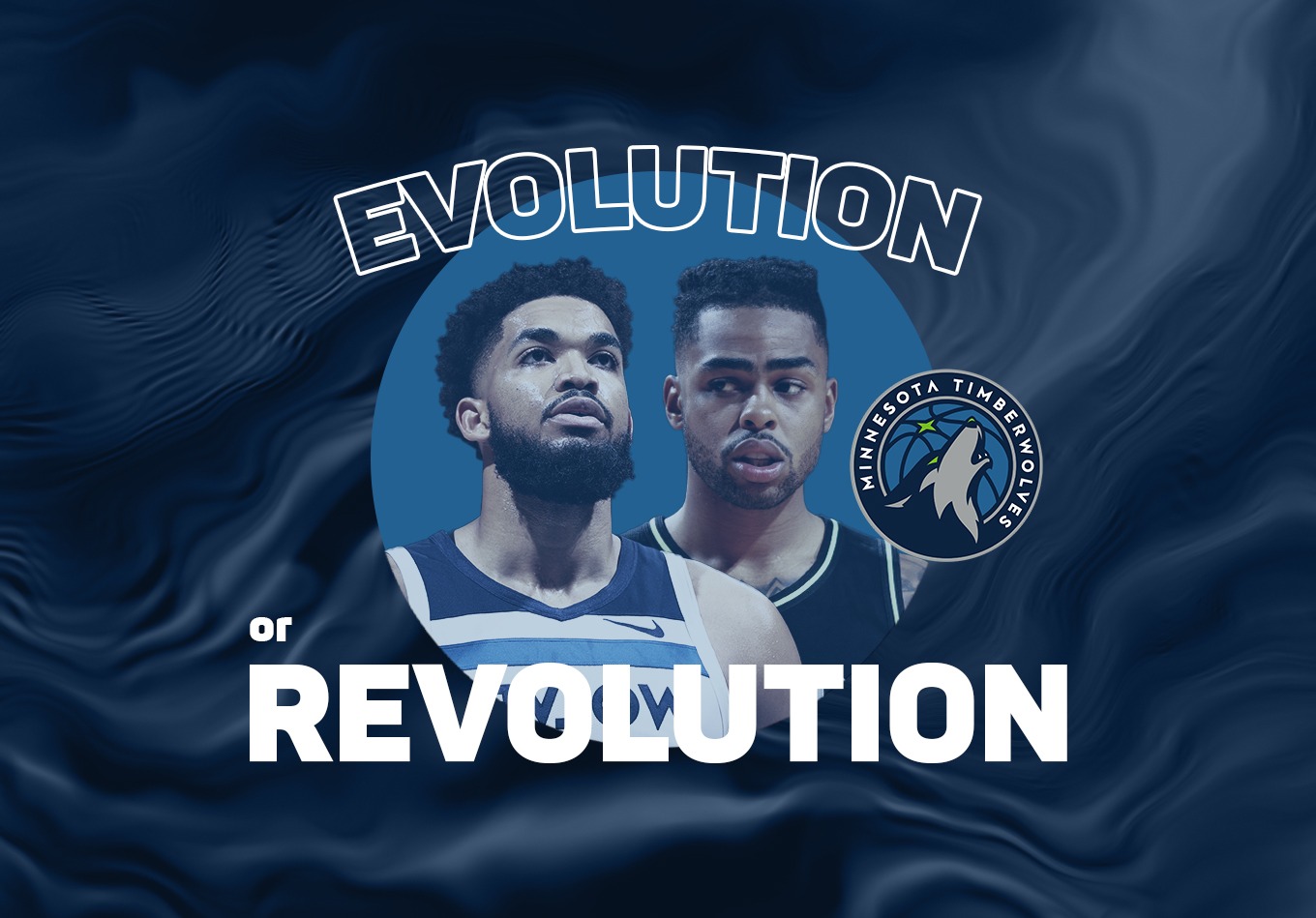 Getting Defensive: Can the Timberwolves Find The Elusive Path to Playoff Contention?

Evolution or Revolution is a series that analyzes whether a team needs a few tweaks or a fundamental reboot. This edition focuses on whether the Wolves should invest in the Karl-Anthony Towns, D’Angelo Russell and Anthony Edwards trio.

The Minnesota Timberwolves were the youngest team in the league last season, and they looked every bit their age for most of the slate.

But the Wolves were extremely competitive over the last month, going 9-7 with a top-10 offense (116.1 points per 100 possessions) over their final 16 games as Anthony Edwards flashed star potential.

Aside from Edwards and fellow former No. 1 overall pick Karl-Anthony Towns, though, what sort of building blocks does this franchise have going forward? Minnesota went into Thursday night’s draft without a selection – the seventh pick, which originally belonged to the Timberwolves, went to Golden State as part of the D’Angelo Russell deal – and now heads into free agency up against the luxury tax with a core that includes those three, Malik Beasley, Jaden McDaniels and not much else.

They didn’t totally sit things out Thursday, though, agreeing to a deal that will send Ricky Rubio and a 2022 second-round pick to Cleveland for Taurean Prince. That will save Minnesota approximately $4.8 million heading into next season.

Is there a path to playoff contention in the Western Conference for a franchise that’s won just one postseason game in the last 17 years? Or is there a major deal to be had to shake up this roster and push the timeline for contention back even further?

Can Towns Be the Best Player on a Contender?

Towns and Russell went 1-2 in the 2015 NBA draft and have been good friends dating back to high school. They spent the first four and a half seasons of their NBA careers apart but talked about wanting to join forces and eventually be part of a super team.

This probably isn’t quite what they had in mind. The two have only shared the floor for 486 minutes in a possible 85 games since Russell came over from Golden State in February 2020. Towns missed 22 games last season, Russell 30 and Beasley 35, leaving the Timberwolves with little idea how this core will function together with Edwards.

Towns is often forgotten in conversations about the league’s truly elite players, but the statistics say he absolutely belongs in that category. Stephen Curry and Kyrie Irving are the only other players to have averaged at least 20 points while shooting 40% from 3-point range over the last four full seasons. He’s one of 17 players ever to average 22 and 11 in their first six seasons, and the 15 who aren’t active are all in the Hall of Fame. Add in a career-high 4.5 assists in the 50 games he played last season, and it’s hard to say Towns is anything but special.

Coach Chris Finch, who took over in February, spent the 2016-17 season as a Nuggets assistant and made Nikola Jokic’s high-post passing the fulcrum of the offense, which, in case you haven’t heard, turned out OK. Towns doesn’t have Jokic’s preternatural passing ability, but there are sets Minnesota can run that take advantage of his vision and help get open shots for Russell (38.7% from 3-point range last season) and Beasley (39.9%).

Is Edwards Primed to Go Up Another Level?

The first month of Edwards’ rookie season was a disaster. There was the 34% shooting, the incredibly low free-throw rate and the porous defense.

As the season wore on, Edwards showed why he was the No. 1 pick – beyond the absurd athleticism and thunderous dunks, like this one that forced Raptors forward Yuta Watanabe to enter witness protection. He averaged 23.8 points, 5.3 rebounds and 3.8 assists over his final 34 games on 56.8% true shooting after posting a 47.1 TS% in his first 38 contests. There’s still much work to be done on his shot selection, but that’s a positive climb to league average considering that number over the first half of the season ranked 173rd out of 175 players to log at least 25 minutes per game.

The perimeter defense needs to get better, but there should be a natural step forward with his first offseason to watch film and understand pick-and-roll coverages and where he needs to be. Edwards should also benefit from getting more consistent minutes with the rest of Minnesota’s stars, who were rarely all on the floor at the same time.

OK, So Where Can They Reasonably Upgrade?

Towns’ extension runs through 2023-24, Edwards is on his rookie deal and Russell is under contract for two more years at a price ($61.4 million total) that, combined with his inability to stay healthy, isn’t going to be very enticing to anyone who picks up the phone and calls Gersson Rosas looking for a deal.

After the Rubio deal, there’s just north of $30 million in expiring deals between Prince, Juancho Hernangomez, Jake Layman and Josh Okogie, though expiring deals aren’t exactly the currency they once were. McDaniels and Naz Reid, the team’s lone center aside from Towns, are on cheap rookie deals and don’t figure to be headed anywhere.

Minnesota expects Leandro Bolmaro, who came over in a 2020 draft-day trade and was part of the ACB Best Young Players Team last season for FC Barcelona, to be in the NBA next season. The 20-year-old Bolmaro, who shot 45.2% from 3-point range last season and is currently playing with Argentina in the Olympics, is 6-foot-8 and can add some punch off the bench.

The Wolves’ biggest need is at power forward, where names like Danilo Gallinari and restricted free agent John Collins are often connected with Minnesota. Getting Collins, in particular, away from Atlanta seems unlikely.

Would the Timberwolves consider trading Beasley? It might be their best path to get a rotation big, though Beasley’s off-the-court history (he pleaded guilty to a felony charge that led to a 12-game suspension last season) could make him less attractive to a potential trade partner. He also missed the last 23 games with a hamstring injury, but 24-year-old guards who shoot 40% from 3 don’t exactly grow on trees.

Ben Simmons has been a name connected with Minnesota, but there’s not really a logical fit unless the Sixers decide they want to settle for some combination of Russell and a future pick or two.

The Defense Can’t Get Worse … Right?

It’s unfair to lay the blame for Minnesota’s inability to get stops entirely at the feet of Towns, but this has been a rough defensive team ever since he entered the league.

The defense got worse after Finch took over (116.1 points per 100 possessions), but the new coach is putting assistant Joseph Blair in charge of improving the defense in the offseason.

“I think that’s a great place for us to start. At least a good goal for us to work with,” he told the St. Paul Pioneer Press. “Obviously, you look at the teams that really make those long runs, they’re typically top 10 in both offense and defense. We want to get there moving forward, but we have to be realistic. We just want to take one big step forward defensively this year, for sure, and I think a big part of that is just trying to encourage effort and accountability on the defensive end, and understand that we are a very powerful offensive team, but we need to be resilient on our defensive end, as well.”

It could prove possible that playing Edwards, Russell and Beasley together, even for stretches, is too much to overcome on the defensive end. But this isn’t a roster completely devoid of defensive talent. Towns has improved since coming into the league and can be an above-average defensive player with the right pieces around him. Edwards has the physical skills and athleticism to be a capable two-way player.

One power forward the Wolves should consider is one of their own. Jarred Vanderbilt, a 2018 second-round pick who was part of the four-team trade that also brought Beasley to the Twin Cities, provided excellent interior defense and energy in just under 18 minutes a game last season. When he played at least 20 minutes, he averaged 9.2 points, 7.9 rebounds, a block and shot 66.4%.

Minnesota only had seven five-man units that played at least 60 minutes together last season. Vanderbilt was part of four of those, all of which put up impressive defensive statistics in their small sample sizes. There are lots of factors at play in these numbers, but they’re certainly encouraging to his future as a rotation piece.

A throw-in in that four-team deal, Vanderbilt is now hitting restricted free agency, meaning another team could throw a contract at him that the Wolves might be hesitant to match as they veer toward the luxury tax. But Minnesota should do everything it can to bring him back. As it tries to establish a winning culture and implement a viable defensive scheme, Vanderbilt can play a part in both.

The good parts of this roster simply haven’t had enough time together.

The Timberwolves never made it into the bubble at the end of the 2019-20 season, robbing Russell and Beasley of what could have been some formative time together, then both struggled with injuries last year.

Minnesota needs to spend a season hoping that its key players are healthy and seeing what it has. It needs to watch Edwards develop and see if he’s on the path to becoming just an elite scorer or an all-around, franchise-caliber star. It needs to let Finch implement a system, give Blair a chance to form a defensive identity, and let the inexpensive young rotational pieces like McDaniels and Vanderbilt find out where they fit.

For the first time in a while, there’s reason to be optimistic about the Timberwolves. There’s no need to hit the panic button here. It’s time to watch this young core blossom together.