Do the Heat Have Another Playoff Run in Them, or Has Their Bubble Burst? | The Analyst 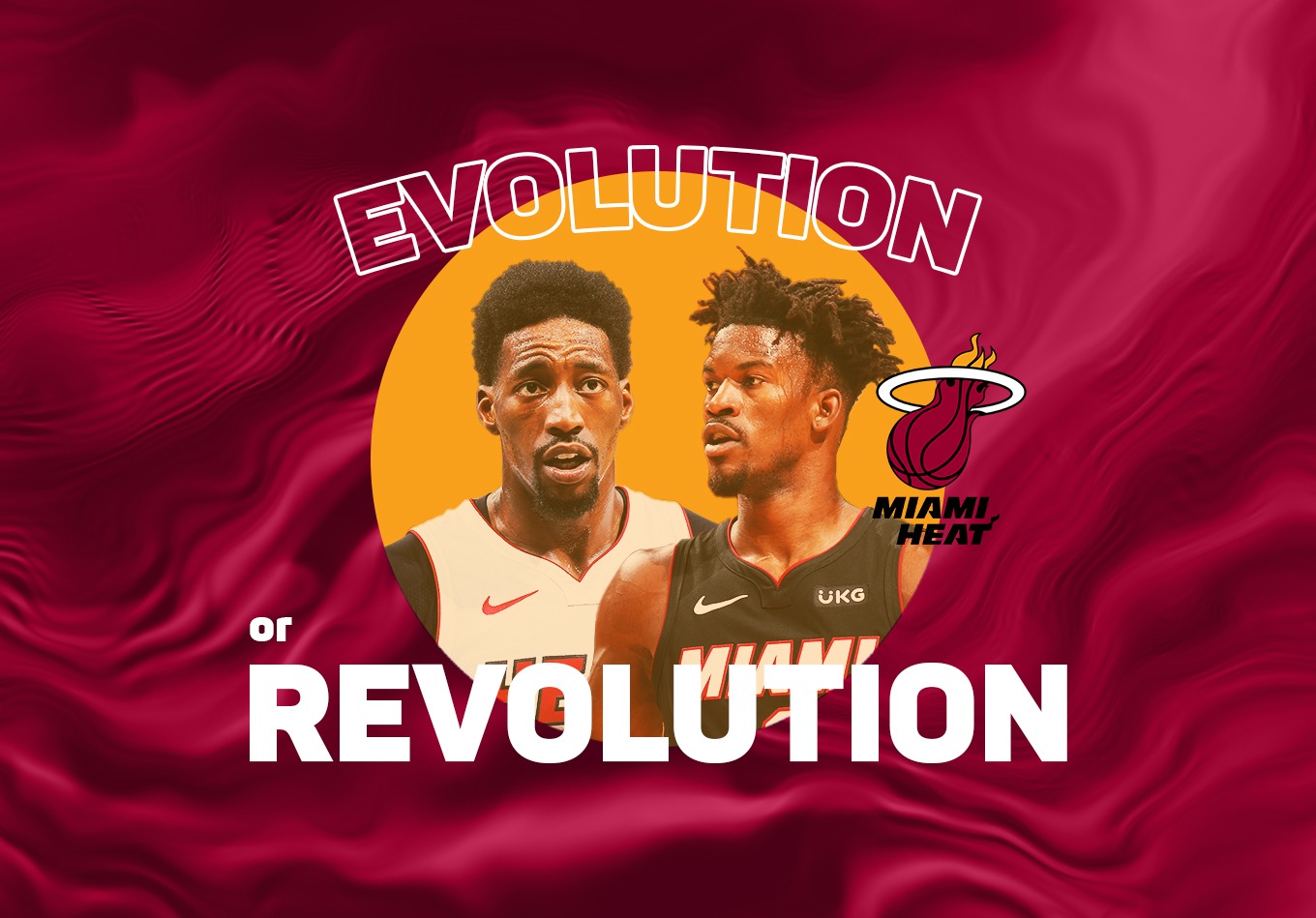 Do the Heat Have Another Playoff Run in Them, or Has Their Bubble Burst?

Evolution or Revolution is a series that analyzes whether a team needs a few tweaks or a fundamental reboot. This edition focuses on whether this season was just a step back or a shift back to reality for the Miami Heat.

The Miami Heat faced a huge challenge when trying to improve on a season that finished with an NBA Finals appearance inside the bubble.

Perhaps unsurprisingly, the Heat seemed right at home in Orlando. Having finished up as the fifth seed, Miami fought its way through the Eastern Conference to be the last team standing, setting up a clash with the Los Angeles Lakers.

In the end, a familiar face halted the unexpected but impressive title charge. LeBron James was a champion twice during his time with the franchise, but he helped mastermind Miami’s downfall in a series that went six games.

The next chapter saw several players on the Heat hampered by COVID-19 protocols and injury, yet Miami still finished up as the sixth seed. There was no extended playoff run this time, though, as the Heat were swept by the eventual champion Milwaukee Bucks.

Now president Pat Riley has some key decisions to make, and the team did not have a first-round pick in the draft in which to add help.

Riley has never been afraid to push all his chips into the middle if he feels a player is worth the gamble. However, it appears he is ready to hold on when it comes to his two aces, Jimmy Butler and Bam Adebayo, describing them as a “great core” in his end-of-season media conference after losing to the Bucks.

Butler averaged 21.5 points per game in the regular season, a slight increase on his 2019-20 number (19.9). His three-point shot continues to be off (as in milk left in the fridge a week past its sell-by date off), but he feasts much closer to the basket. His average attempts in the restricted area finished up at 5.9, while he managed 3.9 in the paint (non-restricted area). It is surprising, then, to see his free throw attempts fall, though he set career-high marks for assists (7.1) and steals (2.08), showing his all-around value to Miami.

Adebayo too saw an increase in terms of his offensive production, going for 18.7 points per game in the regular season. The center’s presence also helped Miami give up the fewest points in the paint (41.3 per game), while overall the team ranked fifth in terms of points against (108.0).

However, the Bucks stifled the duo on offense in the postseason, which has to be a cause for concern. Adebayo shot 45.6% from the field while averaging just 3.3 free throw attempts, way down from the 6.1 from the previous playoffs.

Butler’s struggles were even greater, as he shot 29.7% from the field in four games, leading to an average of 14.5 points while playing 38.5 minutes. His plus/minus ended up at a ghastly -21 per game, the worst ranking of all 239 players to feature in the playoffs.

The 31-year-old is eligible for a contract extension during the offseason, which would be a maximum four-year deal potentially worth as much as $181 million, and despite what happened against Milwaukee, the Heat seem ready to commit to the five-time All-Star. If Butler plays out the season under his current contract, he has a $37,653,300 player option for 2022-23.

With Adebayo locked in for the long term, Miami needs to identify exactly who can help them out, starting with those they already know.

Tyler Herro was a playoff revelation in the bubble. Here was a young player ready to embrace the challenge, a shooter capable of knocking down big shots (he set a new record for 3-pointers by a rookie in the postseason), reaching double figures for points in all but one of his appearances.

His regular-season numbers in 2020-21 improved (15.1 points compared to 13.5) despite a dip in production from beyond the arc – and amid ever-growing whispers about being traded. While the deadline passing silenced such speculation, it is likely to get louder again in the coming weeks.

“We’ll figure it out with him, but what happened to him going down the stretch, I actually thought he got better as a player,” Riley said, maintaining Herro is a “core player.”

However, the former Kentucky Wildcat appears to be the major asset for any big deal, so the Heat must decide if what they saw in the past season – including in the playoffs when the guard averaged just 9.3 points in four games – has made them consider selling on the 13th overall pick in 2019.

The Heat have an opportunity to create a major chunk of cap space by declining team options for two experienced veterans.

Goran Dragic can be retained at a cost of $19.44 million, a number that feels high despite the significant contributions he has made in the past two seasons when playing big minutes, mostly when coming off the bench.

The 35-year-old saw a decrease in points and assists in the 2020-21 campaign (reverting toward the numbers he posted in 2018-19), while he was also restricted to 50 games during the regular season.

Likewise, Andre Iguodala’s declining impact may mean a cap number of $15 million is too much for the Heat to contemplate paying a 37-year-old who averaged 4.3 points per game in both the regular and postseason combined, despite whatever intangibles he may bring to the team.

Then there is the Victor Oladipo conundrum. Miami gave up Avery Bradley, Kelly Olynyk and a 2022 pick swap to get the two-time All-Star from Houston ahead of the deadline. The deadline acquisition played all of four games before suffering a right quadriceps injury that required season-ending surgery.

Now, Oladipo is a free agent with an uncertain future. It is not known when he will return to the court – there were initial reports he may not play at all next season – with the Heat left to make a judgment call based on all 111 minutes of action he played for them. Good luck with that, Pat. Since averaging 23.1 points in 2017-18 for the Pacers, Oladipo has played in 88 regular-season games.

They do have far more information and experience when it comes to two other players who are set to hit the market in free agency, though.

Show Them the Money!

Duncan Robinson and Kendrick Nunn are about to get paid – but will it be Miami who coughs up to keep them?

Both have excelled at times for the Heat after going undrafted out of college, with the team benefiting from signing the pair on cut-price terms. The low-risk moves paid off spectacularly, but now comes the financial backlash.

Nunn posted relatively similar numbers in his second season following an impressive rookie year, even improving slightly from 3-point range (38.1%, compared to 35.0%) and in terms of steals (0.93 from 0.84).

Set to be a restricted free agent, the guard could be set to receive offers around $15 million per season, according to reports. That number may well make the Heat decide to pass, considering the league-wide depth at the position.

Robinson’s situation is the same in terms of his contract situation, but his outlook appears even rosier than Nunn’s. A career 42.3% shooter from deep, he was the fastest player to 500 three-pointers in terms of games played, reaching the milestone in just 152 outings. To put that achievement into context, Stephen Curry did so in 221 games, while Damian Lillard achieved it in 199.

The 27-year-old averaged 2.7 catch-and-shoot three-point attempts per game, behind only Washington’s Davis Bertans in the entire league during the regular season – and he was successful on 41.7% of those tries.

Add in the fact he started all 72 games, an impressive achievement in itself, and Robinson can expect to be on several teams’ offseason shopping list.

Miami, of course, has the right to match any offer. Alternatively, having spotted and nurtured him during his early years, they may feel positive about finding another Robinson-type project at a cheaper price, but that is a gamble, considering the CV they have helped the player build across three seasons.

Riley has already made clear the focus in the offseason is adding the necessary parts to bring the best out of Butler and Adebayo, rather than looking to move either of them on in a blockbuster trade.

Miami finished with a 55.6 winning percentage despite the constant rotations forced on coach Erik Spoelstra due to a myriad of absences, plus the acquisition of Oladipo that was made with a focus on another deep playoff run failed to pan out through no fault of their own.

There were links with Kyle Lowry at the time of the deadline too, and the point guard could be a target again.

Miami could also explore sign-and-trade deals to make sure they get something in return for those they are willing to let move on. Whatever happens with those restricted free agents, it seems probable there will be a much-changed roster come the start of the next campaign.

A front-court partner for Adebayo who offers an outside shooting threat would be most helpful, as would a playmaking presence at point guard, particularly if both Nunn and Dragic are not to return.

Riley made clear he is ready to “roll forward” with the team himself, showing no signs of slowing down in his desire to reconstruct a roster at 76. No matter his age, it is all about a win-now mentality with him at the helm.