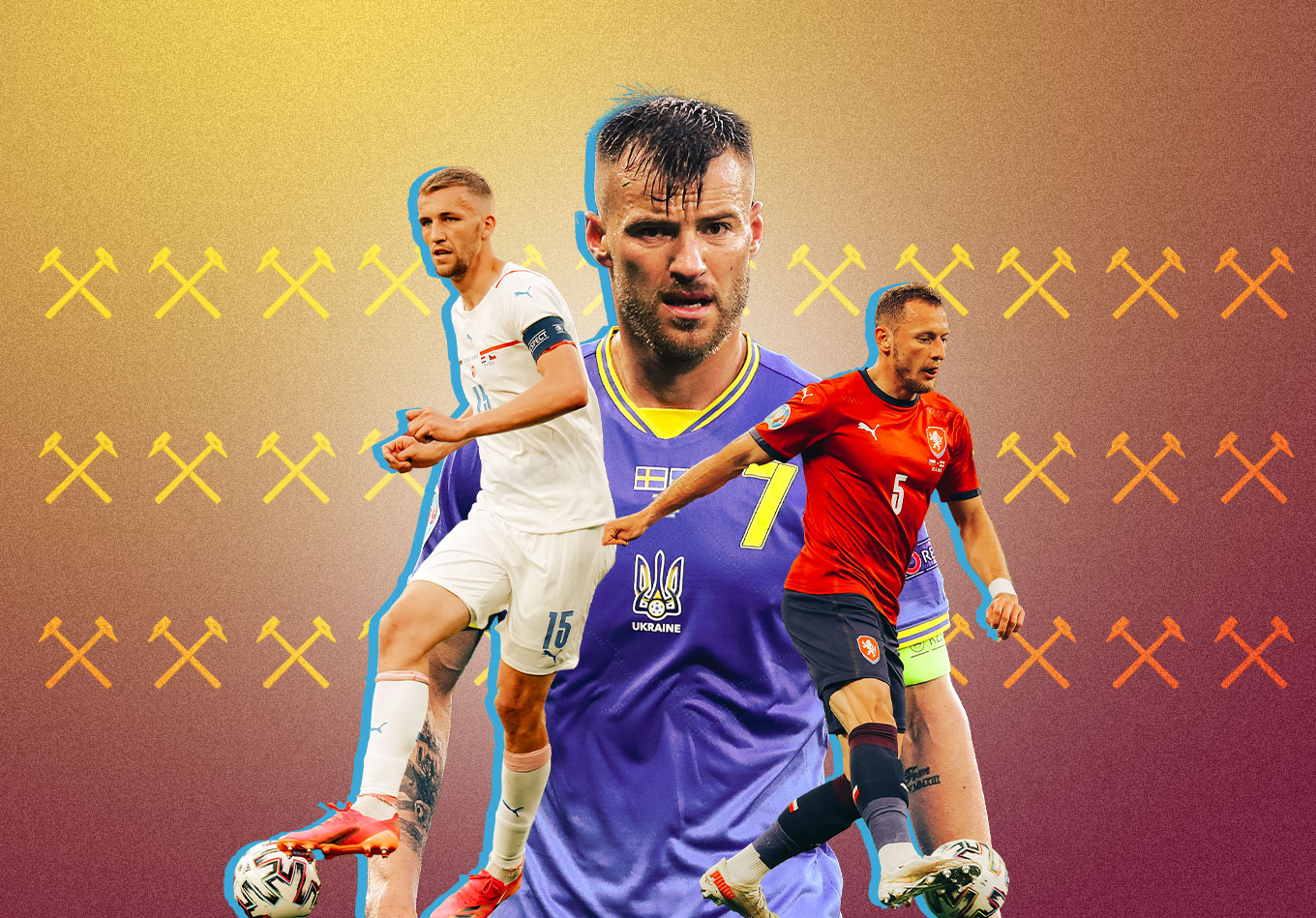 When people attempted to explain West Ham’s top-six finish in the 2020-21 Premier League campaign, plenty of theories were put forward.

The presence of a number of players at their theoretical peak was one suggestion, with the addition of 28-year-olds Vladimír Coufal and Jesse Lingard an element of this. An ability to keep a small squad relatively healthy also played a part. And then there were those who, perhaps harshly but not entirely unfairly, wondered if the absence of an occasionally hostile London Stadium crowd was crucial in allowing Moyes’ side to rebound from a tough start and achieve results with a style conservative enough to attract impatience in more normal circumstances.

‘Hostile crowd might have cost Moyes his job’, writes man who might have been part of said crowd.

Since then, though, something strange has happened.

Five members of West Ham’s 2020-21 squad have gone to Euro 2020, four have started every game for their country, and all four of those have reached the quarter-finals. What’s more, England’s victory over Germany was achieved with a West Ham-like 3-4-3 in attack and 5-2-3 in defence approach, attacking through a mix of lopsided full-backs and an additional full-back in the centre of defence.

As with those who only half-jokingly attributed the Hammers’ resurgence to Moyes himself isolating after a positive Covid test and thus stopping the rot, it’s important to consider how much of this can be put down to mere coincidence. Yes, these are the same players – Coufal, Tomáš Souček, Declan Rice and Andriy Yarmolenko – who spent the last season in east London. However, the players around them are different, as are in some cases the expectations, so it’s worth examining their tournament roles a little more closely.

In the 2020-21 season, West Ham’s chance creation from fast breaks was evident to the naked eye in a way which is backed up by the numbers, though their chance conversion (six goals, second only to Leeds United) stands out more than the 20 chances created, in line with their league position in sixth.

Additionally, as one might expect from a Moyes side – as well as a side with a strong aerial threat (from Souček and others), the club led the way in terms of goals created from set pieces (16) while again tied for sixth in terms of chances created from those situations. It plays into the suggestion that West Ham were benefiting from taking their opportunities in an area set up for marginal gains.

Set-piece strength was also a factor in the Czech Republic’s qualification for Euro 2020 – 54% of their goals in qualifying came from set pieces, the joint-highest of teams at the tournament along with Hungary – but since kicking off their campaign at Hampden Park last month, that has been far from the case.

Indeed, the roles of West Ham’s two Czech internationals in the, admittedly small, sample size of Euro 2020 matches suggests it might be too reductive to claim the club scenario in E20 represented a pure deviation to the skill-sets of the players at their disposal.

What’s immediately notable, as far as Souček and Coufal are concerned, is the freedom with which they have operated during the tournament. Even if the concept of a ‘free role’ in a Moyes side is about as common as tartan paint, there are still plenty of eye-catching aspects.

West Ham had less of the ball than their opponents for the most part last season, with their 42.5% average placing them below three of the bottom six. Not having the ball means two things. One is an onus to do more on the occasions it is in your possessions – see the goals from set plays and fast counters – and another is a reliance on certain players to act in a destructive way.

However, while Rice’s role for England isn’t too far removed from the role he performs at club level – 2.0 tackles per 90 at the Euros, compared to 1.8 in the last league season, albeit with fewer interceptions as England have seen themselves with more of the ball than his club – his central midfield partner at the London Stadium has taken on a different role.

Souček has averaged fewer than half as many tackles per 90 at the Euros as he recorded in his first full season in England (1.0 compared to 2.1).

Tomáš Holeš, Souček’s central midfield partner for three of the Czech Republic’s four games, has made more tackles than his colleague in less than three quarters of his time on the pitch, averaging more than three per game. Like Rice, Holeš is a man who has spent time as a defender before fulfilling his present role in the side (and, like Rice, may well return to a defensive role in the future), so this isn’t an obvious point of difference, and one might intuit West Ham’s movement between 5-2-3 and 4-2-3-1 as more likely, not less, to afford their midfielders freedom with the ball.

Instead, though, Souček has doubled his progressive carry distance per 90 compared to last season’s Premier League campaign and added more than two thirds to his total carry distance per 90. These numbers have largely left his international colleagues in the dust, with one notable exception. You guessed it, it’s Vladimír Coufal.

There’s no doubting Coufal’s place as an outlet for West Ham during his maiden season with the club – of the eight other Hammers defenders to play 10 games last season, only two completed more dribbles per 90 minutes – but his role here was often concerned with reclaiming the ball and starting counter-attacks, or receiving it in attacking positions as well as taking it there himself, notable in his assist for Sébastien Haller’s Goal of the Season contender against Crystal Palace.

He led the way among West Ham defenders for tackles per 90 (2.2), but his dribbles – while not the lowest from an intra-club perspective – were significantly rarer than most players in his position: four right-backs (João Cancelo, José Semedo, Kyle Walker-Peters and Kyle Walker) averaged more than two dribbles per 90, while the three right-backs with a lower return than Coufal include two (Cesar Azpilicueta and Mason Holgate) who played a large number of games in the middle and one who, without wanting to put too fine a point on it, is Nathaniel Clyne.

At Euro 2020, however, Coufal has become the man who does everything. His progressive carry distance per 90 has nearly doubled, from 4.8m to 9.0, while his carry distance has also shot up to more than 150% of his 2020-21 league total. He has also attempted significantly more passes, with a significantly higher success rate. However, among all this, the number of tackles has also increased.

It is also worth noting the form of Andriy Yarmolenko at the Euros, where he has already played roughly the same number of minutes as he managed in all of last season in England. West Ham predominantly used their more attacking winger on the right last season, with left-sided options Pablo Fornals and Saïd Benrahma averaging twice as many tackles per 90 as Jesse Lingard and more than 1.6 times as many as Jarrod Bowen. While the sample size is obviously small, it’s interesting to note that Yarmolenko averaged more tackles and fewer shots per 90 than his right-sided club colleagues, but has thrived at the Euros with less of an onus to contribute defensively. If the Ukrainian stays at West Ham and stays healthy, one senses only one of these versions will gel especially well with Coufal.

While Souček’s carries have been a notable factor in his country’s play in this tournament, a glance at the Czech Republic’s four games paints a curious picture. Yes, the raw numbers represent the actions of a regular ball-carrier, but the midfielder has notably been prepared to collect the ball in very different areas of the pitch depending on the opposition.

We could see this factor into the quarter-final in a defensive sense as well as a counter-attacking one, with the 26-year-old asked to perform something closer to his West Ham role, though this may depend on the extent to which manager Jaroslav Šilhavý is determined to take the game to the Danes.

Both nations are towards the top of the rankings when it comes to high turnovers and high turnovers ending in a shot, so it remains to be seen whether the Czechs will look to play to one of their own main strengths or actively seek to suffocate a strength of their opponents.

Additionally, in terms of player involvement in shot-ending sequences, Denmark’s main threat across the tournament so far has come from two men – Pierre-Emile Højbjerg and Joakim Maehle – whose positions see them in direct opposition to Souček and Coufal respectively.
After watching the West Ham duo show us they can do everything, the Denmark match will be a test of whether they’ll carry on choosing to do that.