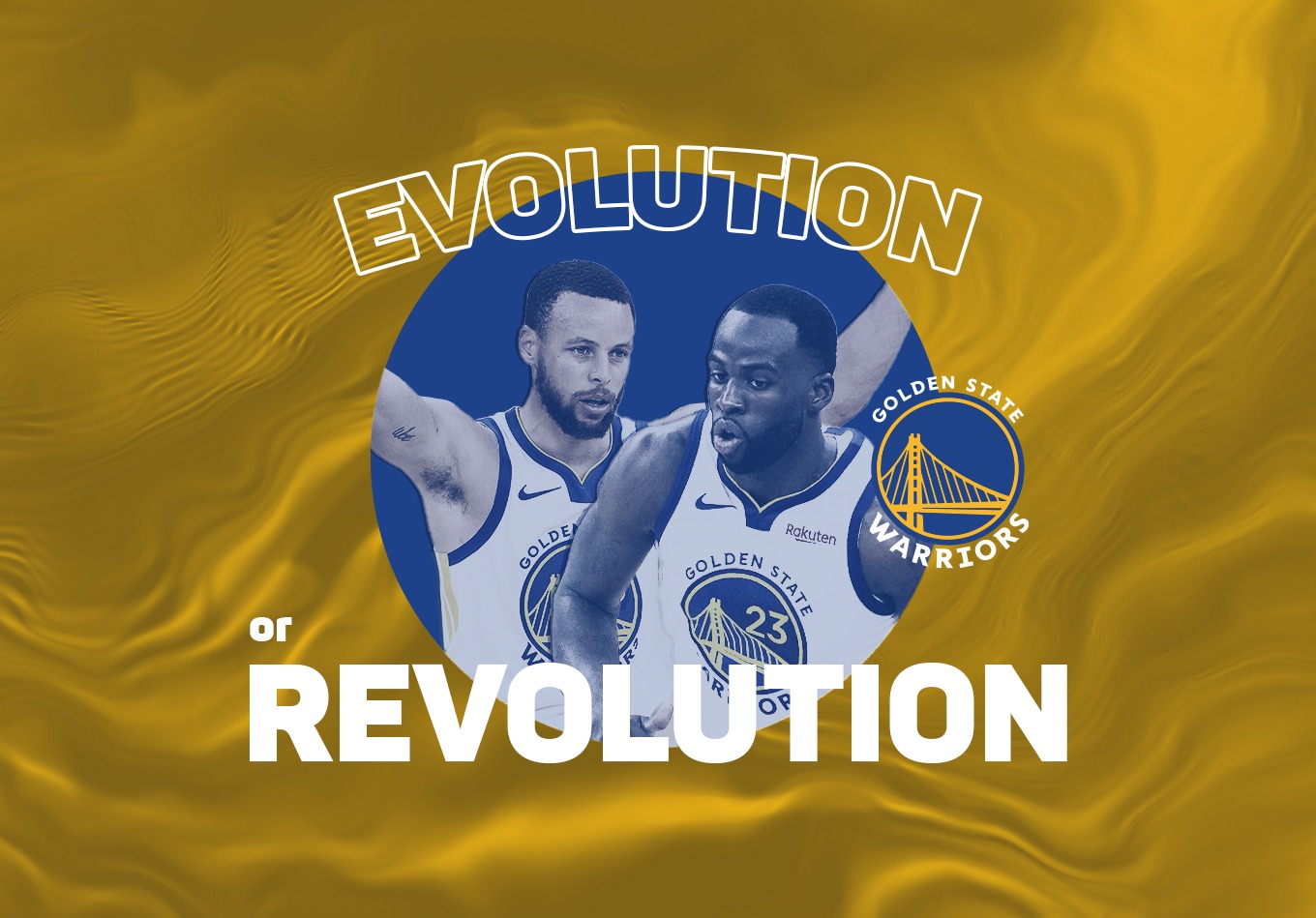 Can Steph and the Warriors Find a Way to Rule Once More?

Evolution or Revolution is a series that analyzes whether a team needs a few tweaks or a fundamental reboot. This edition focuses on how Golden State might be able to revive its dynasty.

The Golden State Warriors’ 2020-21 season ended in heartbreaking fashion, but you might not know that reading head coach Steve Kerr’s most recent comments.

Golden State rode an MVP-caliber season from Stephen Curry to the eighth spot in the Western Conference and a place in the play-in tournament.

Yet that was where it all fell apart.

The Warriors missed out on the seventh seed as a miracle LeBron James 3-pointer helped the Los Angeles Lakers to a dramatic victory, and the Warriors were then outplayed by the Memphis Grizzlies in the final play-in game to ensure they would be watching the postseason from home.

Despite that bitter end, Kerr was left extremely encouraged after seeing his team win 16 of their last 22 regular-season games despite playing a second successive season without Curry’s backcourt running mate Klay Thompson, who suffered a torn Achilles before the campaign.

“I’m really excited. I feel like we got our mojo back at the end of the year,” Kerr told The Athletic. “The offseason has been productive in terms of Klay now breaking through. He’s on the court, he’s running, he’s feeling good. I talked to him last week. He’s just in a completely different mindset. The light’s at the end of the tunnel.

“Steph and Draymond (Green) are both in a great place after that close to the season, feeling like they are on top of their games. Andrew (Wiggins) had a good season for us. Jordan Poole emerged. Juan (Toscano-Anderson) has turned himself into a rotation player, perfect for our style. Now we get a training camp with James (Wiseman), a whole season of development, plus (picks) seven and 14 in a deep draft.”

However, Kerr’s excitement for the new season being vindicated hinges on what they do with those picks and how they stack the roster to help the core of Curry, Thompson and Green contend for at least one more championship.

So should they use those prime draft selections and continue to develop Wiseman with a view to building sustainable long-term success, or trade the picks and young assets for another star? It’s truly a case of evolution or revolution for the Warriors this offseason and, with Kerr in Japan with Team USA, he won’t be in the building to influence the final call.

Curry Cooks Up a Storm

Curry’s season merited more than the five first-place votes he received in the MVP race.

His points per game average of 32.0 was the highest of his career, topping the 30.1 he produced in 2015-16 when he was named unanimous MVP and the Warriors broke the single-season wins record by going 73-9.

Per 75 possessions, Curry’s scoring average of 32.1 was second only to Joel Embiid (32.9) as he continued to embellish his resume as the greatest shooter of all time.

Curry’s 5.3 3-pointers made per game was a league record, and the 2020-21 season was the third in which he averaged at least 5.0. He remains the only player to achieve the feat even once.

Curry had seven games with 40-plus points and at least 10 3s last season. No other player has registered more than three such performances in their career.

Becoming the first player to post three 50-point games in a season at age 32 or older and producing a scoring average that was the highest by a player of that age in league history, Curry is clearly showing no signs of slowing down.

Still, his usage rate of 34.8% is probably not sustainable, but if the Warriors are to allow Curry more rest in 2021-22, they must solve the problem of what happens when he comes off the floor.

The most dramatic illustration of the Warriors’ struggles without Curry came back in April. With Curry and Green each on the sideline, they were thrashed 130-77 by the Toronto Raptors.

The 53-point reverse was the second-largest defeat in franchise history, though it can be argued it was a necessary low point for Golden State. The Warriors subsequently lost to the Atlanta Hawks before embarking on that 16-6 surge.

And the numbers from across the season paint a telling picture of Curry’s importance to the Warriors’ cause.

Their point differential was 4.3 with Curry on the court compared to minus-4.5 when he played the role of spectator. The Warriors effectively lost 8.8 points per 100 possessions when their leader was absent.

Ensuring that disparity is not as severe in 2021-22 will be a key focus of the Warriors’ offseason, yet there were still some encouraging performances from those not named Curry to build hope that Golden State can contend in the postseason again.

Wiggins set career highs in field goal percentage (47.7) and 3-point shooting (38.0) while Poole established himself as a productive option off the bench, shooting 42.2% over those final 22 games.

Perhaps the best find of the season was Bay Area native Juan Toscano-Anderson who, having been signed to a two-way contract in December, landed a full-time deal in May.

Toscano-Anderson was seventh in the league in effective field goal percentage (66.7) and eighth in true shooting percentage (67.6), deservedly earning a spot in the frontcourt rotation.

Yet for all the positives that emerged as the Warriors got hot late in the campaign, their ability to take a step towards vying for the title may be decided by what they decide to do with last year’s most high-profile addition.

The Warriors have the capital to stack the deck in Curry’s favor with the addition of either seasoned pros or promising prospects. They were one of the winners of the NBA lottery as the top-three protected pick the Minnesota Timberwolves sent them in the Wiggins-D’Angelo Russell trade became the seventh selection in this year’s draft.

That gives them the flexibility to pursue a trade for more experienced help, but whether they go down that avenue may depend on how the Warriors view Wiseman, whom they took second overall in 2020 despite him having only three games of collegiate experience.

And they were not granted a full season’s evidence to aid their decision about the 20-year-old center as a meniscus injury brought his rookie campaign to a premature end.

There were signs that Wiseman could blossom into the dominant athletic big man who can make a difference at both ends, and center has long since been a position of concern for the Warriors even at the height of their dynasty.

He posted double figures in points in 24 of his 39 games but a net rating of minus-10.1 was reflective of a player who still needs time to acclimatise to the challenge of playing at the highest level.

That is no surprise given Wiseman’s inexperience, and Kerr is hopeful he will make strides with the chance to get a full offseason under his belt. However, with the front office reportedly exploring trade options, will the Warriors have the patience to stick with him with potentially more immediate contributors available?

Golden State would surely have to include Wiseman in any potential blockbuster trade, with the Warriors mentioned as a potential destination for Oakland native Damian Lillard, the increasingly maligned Ben Simmons and Raptors star Pascal Siakam.

Bradley Beal, who Curry beat out for the scoring title, is reportedly viewed as the Warriors’ top option in a trade, but there haven’t been signs that a deal is on the horizon.

After another year with no postseason play, Golden State wants the talent to improve markedly in a hurry. But if the Warriors do not identify a player whom they deem worthy of a price that includes Wiseman, they may need to instead hope he makes a second-year leap and starts producing the dividends a player of his obvious physical gifts can deliver.

The Warriors are the team to watch in the days leading up to the draft as reports of trade discussions continue to swirl.

Despite being flush with capital, it is appearing more and more likely that if they do send some of their resources to a rival, it will not be as part of a trade that changes the complexion of the league.

Instead, the more feasible outcome is that the Warriors do a deal to supplement the core that initially shook up the NBA in 2015 by jump-shooting their way to the title, rather than reshaping it with the addition of another bonafide star.

Myles Turner is said to have been the subject of talks between the Warriors and the Indiana Pacers, and his arrival would give the Warriors a difference-making big on both ends of the floor.

Turner missed the final 18 games of last season with a sprained toe, but still led the NBA with a block percentage of 8.8 and was seventh among centers that played a minimum of 25 games with an average of 1.5 made 3s.

In the draft, the reported urging from Curry, Thompson and Green for the organization to get players who can help them now may force the Warriors to target more experienced rookies after going young with Wiseman last year.

Oregon guard Chris Duarte is 24 and was named to the Pac-12’s All-Defensive Team last season while finishing third in the conference with a field goal percentage of 53.2.

Davion Mitchell turns 23 in September and led the Big 12 in 3-point shooting, converting on 44.7% of his efforts from beyond the arc, and James Bouknight of UConn is thought to be in the mix as a younger shot-creator who was second in the Big East in 2020-21 with 23.7 points per 40 minutes.

The Warriors’ front office is seemingly facing external and internal pressure to utilize their draft capital to land a premier player who can propel the Warriors back to the top of the Western Conference and firmly open the window for Curry, Thompson and Green to polish their resumes further.

Yet a team led by a player who has spent his Hall of Fame career redefining limits with his remarkable shooting range may find their trade possibilities restricted, and Curry and Warriors fans alike might have to reconcile themselves with an offseason that only slightly improves Golden State’s odds of winning now but sets them up to stay relevant once his days of carrying their hopes are in the past.