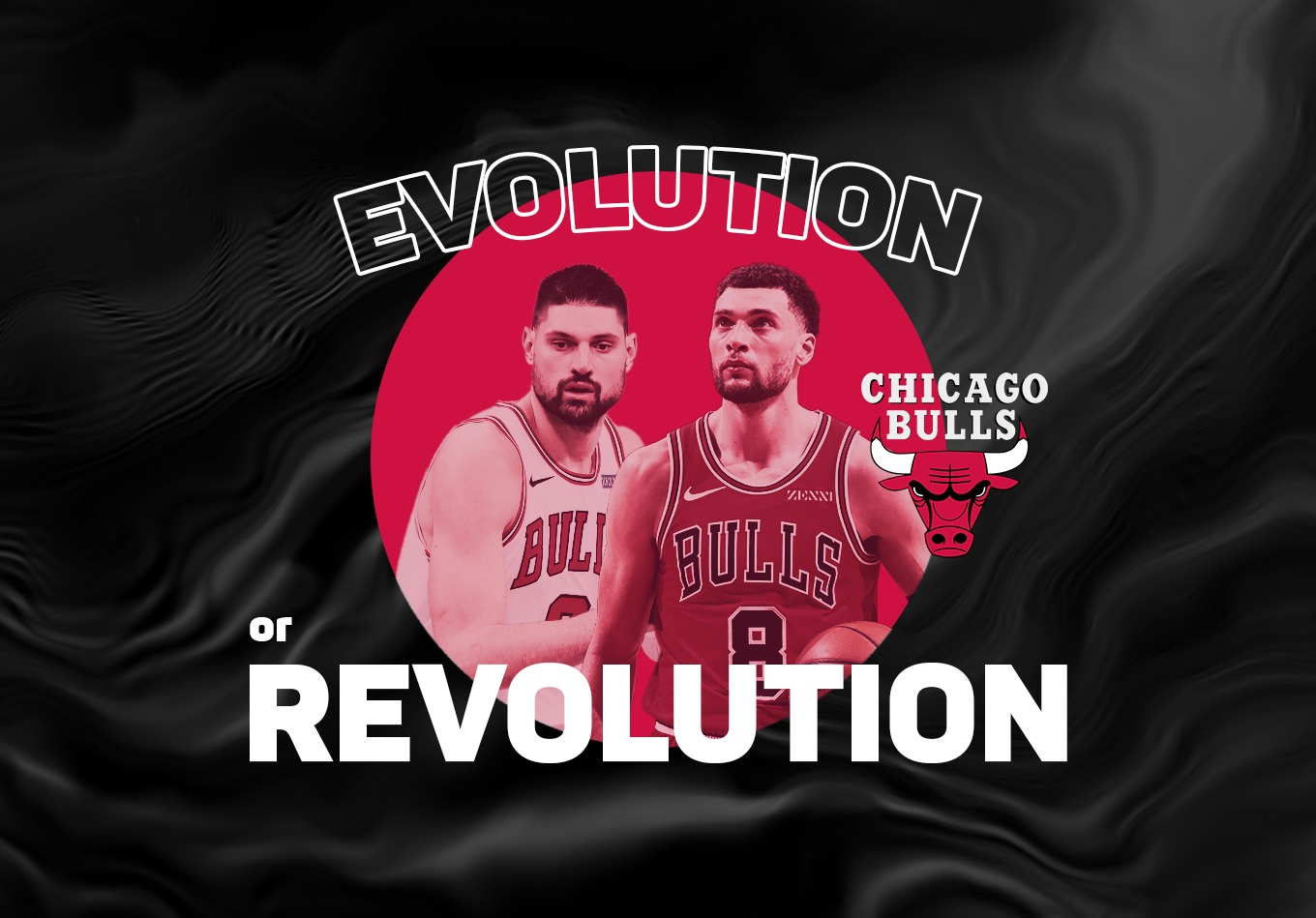 Is It Finally Time to Be Bullish Again in the Windy City?

Evolution or Revolution is a series that analyzes whether a team needs a few tweaks or a fundamental reboot. This edition focuses on how the Bulls can get over the hump after making a bold move to acquire Nikola Vucevic last season.

Arturas Karnisovas and Billy Donovan have restored hope to the Chicago Bulls, even if success has so far remained elusive under the once-iconic franchise’s new regime.

Year 1 of the Karnisovas-Donovan era did bring about slight progress. The Bulls’ 31 wins in 2020-21 were their most in a season since they last reached the playoffs in 2016-17, and they had been on course to qualify for the play-in tournament before a pair of unfortunate circumstances – a three-week absence from All-Star Zach LaVine due to a positive COVID-19 diagnosis and a late-season revival from the Washington Wizards – conspired to keep them away.

Still, an 11th-place finish in the Eastern Conference wasn’t what Karnisovas had in mind when he left a successful setup with the Denver Nuggets to take over Chicago’s basketball operations in April 2020, and he made it clear during his season-ending press conference that the status quo won’t be accepted.

“We will not settle for mediocrity here,” he stated. “We have an important summer coming up.”

Karnisovas already had declared that the future is now with two eyebrow-raising moves during his short tenure in Chicago. The first was to convince Donovan, arguably the top free-agent coach on last offseason’s market, to join forces despite seemingly more appealing vacancies available. The second was the in-season acquisition of two-time All-Star center Nikola Vucevic from the Orlando Magic, a deal that saw the Bulls part with young center Wendell Carter Jr. and two first-round picks that includes the eventual No. 8 choice in this year’s draft.

And more bold ventures could be on the way with Karnisovas intent on ending the Bulls’ four-year postseason absence, the second-longest active drought of any team in the East.

“We will continue being aggressive in our efforts to make this team better, whether that’s through trades, free agency or the draft,” he said.

The sense of urgency is heightened further when factoring in the long-term status of LaVine, who’s entering the final year of his contract and seems likely to decline an extension offer with designs on securing a significantly larger max deal as a free agent next summer. The prolific scoring guard has never been to the playoffs in any of his previous seven seasons, so the Bulls may need to prove they are on the right path in order to prevent him from walking in a year.

GETTING TO THE POINT

Both Karnisovas and Donovan singled out turnovers and an inability to get to the foul line as particular problem areas from last season’s team.

The Bulls had giveaways on 13.6% of every 100 offensive possessions, tied for the third-highest rate in the NBA, and their 1,258 free throw attempts were by far the fewest of any team. Chicago attempted an average of 4.8 fewer free throws per game than its opponent, also the largest negative disparity in the league.

Upgrading the starting five figures to be another high priority. Bulls’ starters were outscored by nearly 2.5 points per game over the course of last season, and the team ranked 22nd in the NBA in first-quarter scoring differential (minus-1.2 per game).

And that margin was actually worse (-2.4) following the Vucevic trade on March 25, though it should be noted that LaVine and Vucevic played together for only 15 of Chicago’s 29 games after the swap.

LaVine, Vucevic and 2020 first-round pick Patrick Williams are locks to return as regulars, but third-year guard Coby White’s role is less defined going forward. The 2019 No. 7 overall pick has been much more of a scorer than facilitator through his first two seasons, and it’s fair to question whether he may be most effective as a Lou Williams/Jordan Clarkson-type who can provide high-volume offense off the bench.

White also may not be ready for the start of next season after undergoing shoulder surgery in June, which further increases the need for a point guard that can mitigate the Bulls’ free throw disparity as well as get the ball to Chicago’s two All-Stars.

Lonzo Ball is a name often linked to the Bulls, and Karnisovas reportedly made a strong push to try to land the Pelicans point guard at the trade deadline. Another attempt to reel in a player who would be an obvious fit cannot be ruled out, though making it happen still would be tricky. Ball is a restricted free agent and New Orleans can match any offer sheet, plus the Bulls may not have the financial flexibility to win a bidding war with a team flush in cap space (like the New York Knicks) should the Pelicans opt not to match.

Spencer Dinwiddie presents another intriguing option, particularly if the main goal is finding someone who can get to the line at an elite rate. The unrestricted free agent averaged 9.9 free throw attempts per 48 minutes over the 2018-19 and 2019-20 seasons, a rate surpassed only by James Harden, Luka Doncic, Lou Williams and Trae Young among primary ball-handlers.

There’s risk involved with a potential pursuit, however, as Dinwiddie is reportedly seeking big money after only playing three games this past season before tearing his ACL. The Bulls would have to work a sign-and-trade with the Nets to fit him in, a complicated scenario due to Brooklyn’s lack of cap room.

A cheaper possible option could be Charlotte’s Devonte’ Graham, a restricted free agent who the Hornets could view as expendable due to the emergence of another Ball brother, 2020-21 NBA Rookie of the Year LaMelo. Graham will have his share of suitors if available, so Karnisovas will have to a bit creative here as well if he is a target. Perhaps a sign-and-trade involving free-agent center Daniel Theis could pique the interest of a Charlotte team in sore need of rim protectors.

Dennis Schroder, who played two seasons for Donovan in Oklahoma City, makes for another sensible alternative. The unrestricted free agent will not come cheap after reportedly turning down a four-year, $84 million extension from the Lakers during the season, and a sign-and-trade seems the only plausible possibility if L.A. chooses to move on.

The Bulls may have the necessary assets to get such a deal done, however, which brings us to…

MAXIMIZING A MOVE OF MARKKANEN

The Vucevic trade did not impact the Bulls much in the standings, but it may have revealed their plans for another player once considered one of the franchise’s building blocks.

Lauri Markkanen’s playing time diminished down the stretch as Donovan preferred to have the more defensively versatile Thaddeus Young playing alongside Vucevic, and the restricted free agent seems a likely casualty with Karnisovas plotting further roster changes this offseason.

Markkanen may have fallen out of favor with Chicago’s new regime, but plenty of other teams would be enticed by a 24-year-old big man who became the fifth player 7-foot or taller to have 100 or more 3-pointers while shooting 40% or better from beyond the arc in NBA history (Dirk Nowitzki and Channing Frye did it twice, Andrea Bargnani and Spencer Hawes once).

There’s a risk the Bulls could lose Markkanen for nothing to a team with cap space like the San Antonio Spurs or Thunder, but there’s still a good chance of finding a trade partner willing to take on the $12-16 million per season the 2017 first-round pick could earn on his next contract.

With Schroder possibly pricing himself out of Los Angeles and the Lakers in dire need of a floor-spacing big, a potential match exists there. San Antonio, a heavily rumored Markkanen suitor, is a possible fit as well with a roster possessing a surplus of young and talented wings (Lonnie Walker, Devin Vassell and Keldon Johnson) that could help the Bulls shore up another area that could use some depth.

With the Bulls committed to building around Vucevic, it’s imperative for them to add players that would benefit from his unique talents as a premier passing and inside-outside scoring big. Without a first-round pick that could bring in a long-term answer at point guard or a needed 3-and-D wing, a Markkanen trade may be the best avenue to better round out the roster.

After more than a half-decade of routinely languishing in the lottery, the arrow is finally pointing up in Chicago.

The Bulls are now armed with two legitimate All-Star caliber players in LaVine and Vucevic and a pair of potential high-level talents in Williams and White, and Donovan and Karnisovas have brought stability and credibility to a leadership staff that too often lacked vision and direction in years past.

There should be enough in place for the Bulls to make a strong run at a playoff spot even if they mostly stand pat this summer, and perhaps something beyond a postseason cameo if they are able to add another significant piece to an emerging core.

These next 12 months will be vitally important ones for the franchise, however. In the best-case scenario, the Bulls take another step forward in 2021-22 and persuade LaVine to stay for the long haul to reap the rewards of an emerging contender. At worst, a lack of depth or continuity keeps Chicago in the bottom half of the East and LaVine becomes a coveted trade target to accelerate yet another painful roster reset.

With both being plausible outcomes, the Bulls could be one of the more intriguing teams to follow over the course of next season.