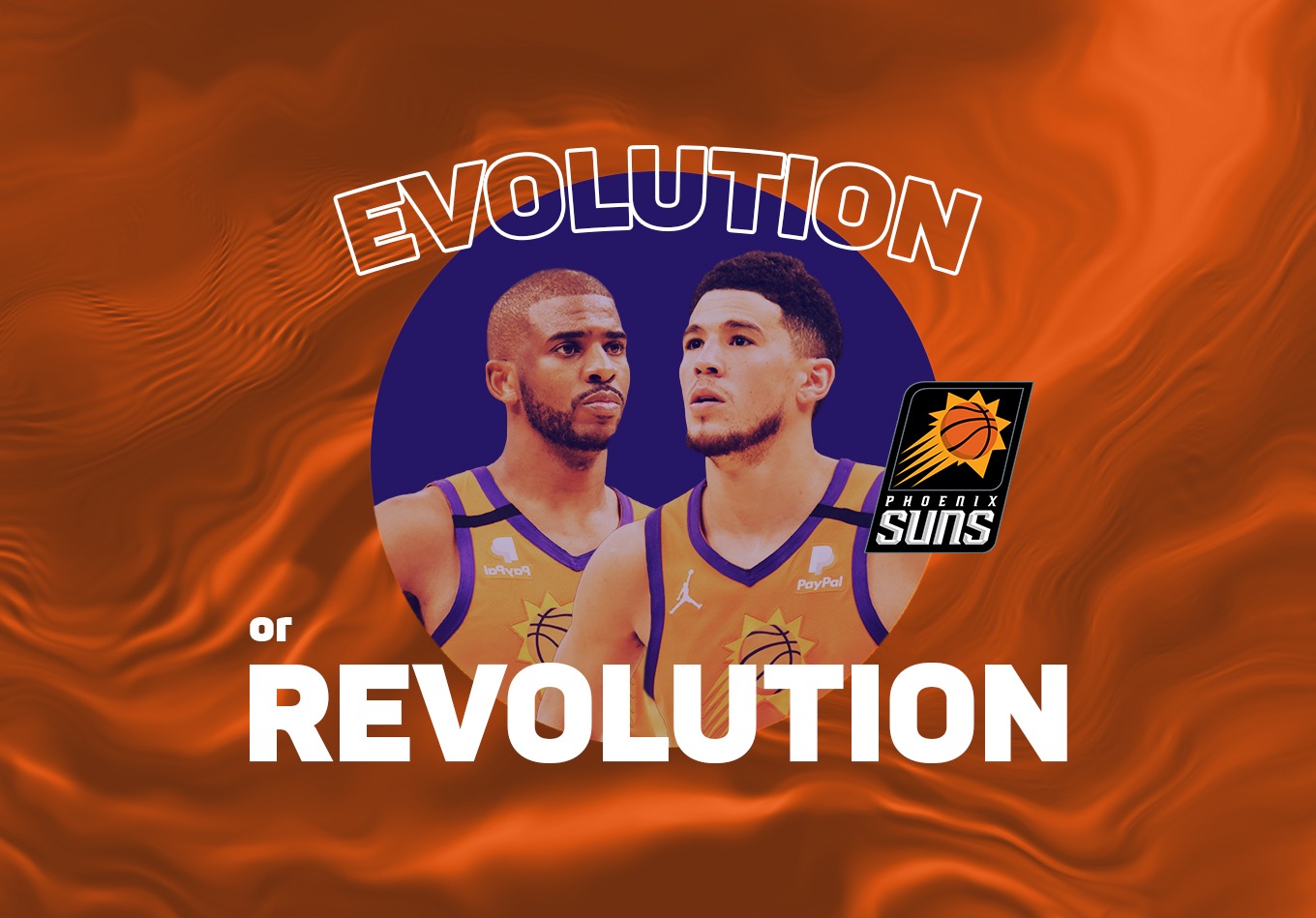 Can the Suns Build on Their Rise to the Top of the West?

Evolution or Revolution is a series that analyzes whether a team needs a few tweaks or a fundamental reboot. This edition focuses on how the Suns follow up their run to the Finals.

The Phoenix Suns spent a long time on the outside looking in when it came to the NBA playoffs. Having finally made it, they did not waste the opportunity.

A young team guided by the steady hand of Chris Paul worked through the Western Conference field before coming up just short in the NBA Finals, letting an early 2-0 lead slip away and losing in six games to the Milwaukee Bucks.

It was a disappointing end to a season that delivered so much – just not quite a first title for the franchise.

As head coach Monty Williams expressed in the aftermath of the Game 6 defeat in Milwaukee that put an end to the Suns’ championship aspirations, it was an astonishing run that saw the unlikely runner in the postseason race fall at the final hurdle having come out on the wrong end of some key moments.

“I just think that when you go through something like this for the first time, you don’t expect to get this far,” he said.

“So, from that standpoint what a huge accomplishment by our players to get to the playoffs for the first time and get all the way to the Finals and have a chance to play for a championship, like that’s hard to process.

“You typically get to the first round and you’re done. And you learn and then you try to get to the second round. We got all the way to the Finals. And that hasn’t been lost in my thinking.”

The way it all finished should not overshadow the huge improvements made. Now they must work out how to make sure this becomes the norm, rather than an occasional exception amid years of struggle.

Paul Makes All the Difference

Phoenix almost made the playoffs in the NBA bubble, finishing with an 8-0 run after the coronavirus-enforced hiatus in the season. It was not just their social media team that excelled upon the resumption; having failed to win more than 24 games in any of the previous four seasons, the late push carried them to a 34-39 record. Good, just not quite good enough.

In response, the Suns made a huge offseason move to try to make sure they finished up on the right side of the cut line.

Paul was acquired via a trade with the Oklahoma City Thunder, adding a much-needed veteran presence to one of the youngest rosters in the league. The ‘Point God’ had arrived – hallelujah!

The Suns benefited immensely from his presence, finished the 2020-21 regular season at 51-21, a 24.2% increase in wins from the previous campaign, ranking them fourth for the biggest improvement in the league.

For his part, Paul averaged 16.4 points and 8.9 assists per game. Deandre Ayton was his top target, setting up the center on 143 occasions – only Draymond Green to Stephen Curry (194) was a more successful scoring combination. The point guard also topped three figures with passes to set up buckets for Devin Booker (118) and Mikal Bridges (106).

The 11-time All-Star did this while giving up just 2.2 turnovers per outing, easily the lowest number for any player in the top 10 list for assists. His scoring increased in the playoff run, too, up to 19.2 points per outing, although he ended up with a combined plus/minus of -37 across the four successive losses to Milwaukee.

The question now with Paul is what happens next.

He has a player option for the 2021-22 season worth $44.2 million, a high number but one certainly worth paying if you are Phoenix. The player holds the leverage here, however, as he searches for that elusive title that would be the cherry on top of a Hall of Fame career.

Opting out of the current deal allows him to negotiate a longer, more lucrative contract at the age of 36. The Los Angeles Lakers have been rumored as a possible alternative to staying with the Suns, who would have to be willing to get involved in a sign-and-trade deal with the team they knocked out in the first round of the playoffs.

Linking up with LeBron James for more than just a ride on a banana boat in the Bahamas could appeal to Paul, particularly as he calls Los Angeles home.

However, the Lakers offer less certainty when it comes to a potential route back to the championship decider. The Suns, in contrast, have all their core pieces coming back.

The Suns have already paid Booker – he received a five-year extension worth $158 million in the 2018 offseason – and now is the time to do the same for Ayton.

The first overall pick in 2018 produced one of the most memorable moments of the playoffs, as his game-winning dunk against the Los Angeles Clippers off an alley-oop inbound pass on the last play put his team 2-0 up in the Western Conference Finals.

Of course, he was also on the other end of a viral clip when Giannis Antetokounmpo blocked his attempted dunk in Game 4 against the Bucks. It was a contest that saw Ayton finish with six points, his offensive impact waning as Phoenix failed to turn the tide.

Still, it should be remembered this was his first playoff experience. The former Arizona Wildcat had 14 double-double performances in 22 postseason games, during which he went up against Anthony Davis (for a while at least), MVP Nikola Jokic and then Giannis, of course. In a small-ball era, his play at both ends showed how he can remain on the floor in just about any circumstances.

No player benefited more from Paul’s presence than Ayton, who described the veteran point guard as the “best thing that happened to [his] career.” Some tough love may well have helped him get paid, with Phoenix able to offer him a five-year, $168 million contract.

“We had some heated conversations this season, especially earlier in the season, but man, I genuinely love him. You know what I’m saying? The person he is,” Paul said. “And to see everything that’s coming to him, and the national audience getting to see who he is and why he was the number one pick, I couldn’t be happier for him.”

Ayton is a long-term building block along with Booker, whose output rose from 25.6 points per game in the regular season to 27.3 when averaging 40.4 minutes in the playoffs.

Bridges’ effective field goal percentage of 64.3 ranked 14th in the league, while he shot 42.5% from beyond the arc when averaging 4.4 attempts during the regular season.

He was an effective outlet for when teams helped on Chris Paul and Devin Booker on drives, as he was third in the league in 3s attempted from the corners.

Like Ayton, he too is eligible for an extension, though negotiations over a figure that suits both sides could be a little trickier in his case.

Paul is undoubtedly top of the to-do list for the Suns, though he is not the only player whose situation needs to be cleared up in the coming weeks (the deadline for his option is August 1).

There are some role players set to become free agents from the 2020-21 roster, most notably Cameron Payne. The guard shot a team-high 44.0% from 3 in the regular season, then filled in admirably when Paul was missing due to health and safety protocols during the playoffs.

His performances are likely to attract offers that could price Phoenix out of the market, but Frank Kaminsky – a big who had his moments in the postseason once Dario Saric was lost to injury – and Torrey Craig may be more affordable to keep around.

E’Twaun Moore and Langston Galloway could be viewed as expendable. Jalen Smith played sparingly in a tough rookie season that included a spell in the G League. The dependable Jae Crowder blocks his path to minutes, but Saric’s torn ACL does leave a hole in the front-court rotation.

However, the Suns’ outlook hinges on what happens with Paul. The performances of the young trio of Ayton, Booker and Bridges were huge pluses but CP3 was the key that unlocked the talent. Without him, the road back to the NBA Finals becomes far less clear.