Can the Jazz Be More Than a Regular-Season Titan? | The Analyst 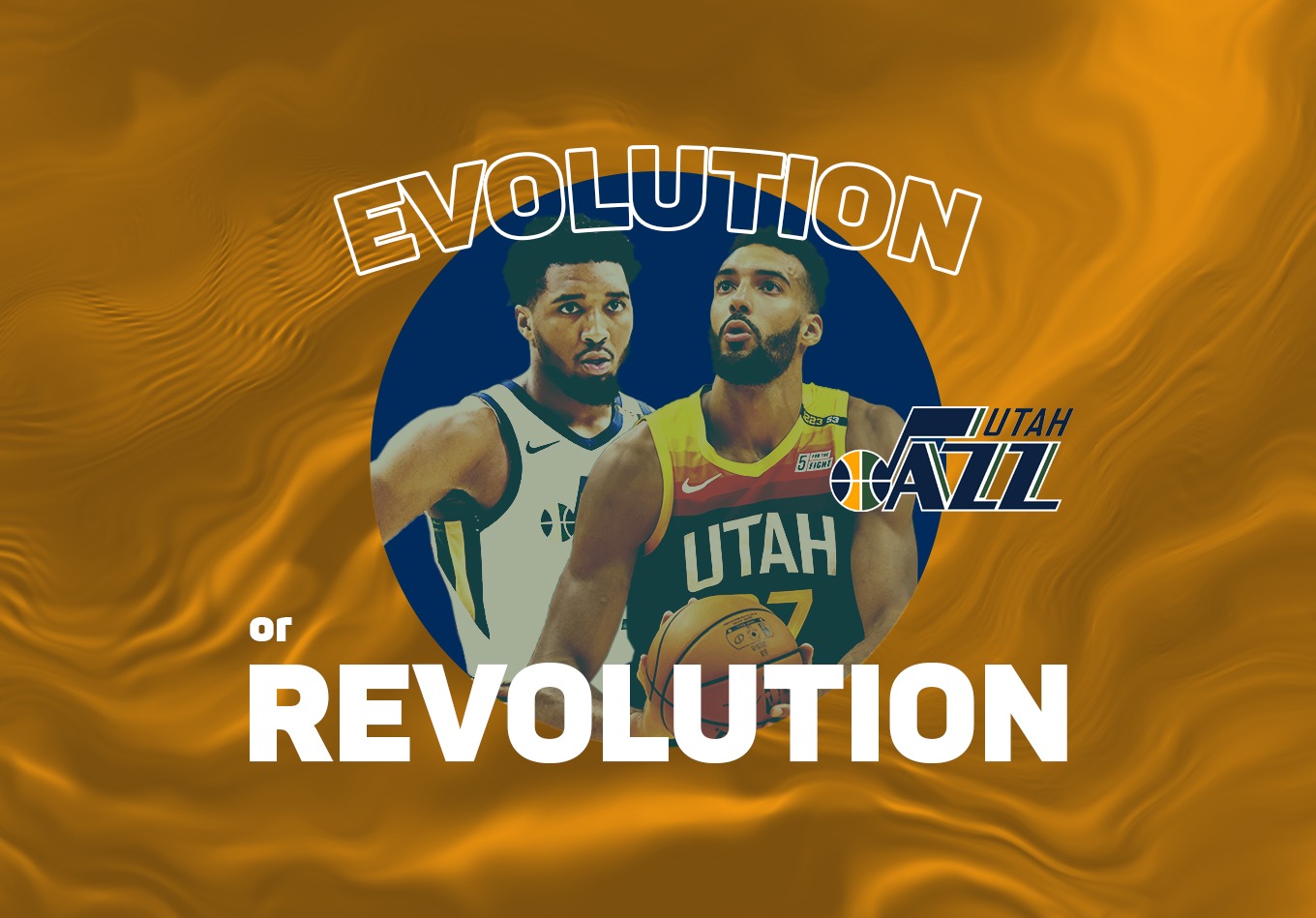 Can the Jazz Be More Than a Regular-Season Titan?

Evolution or Revolution is a series that analyzes whether a team needs a few tweaks or a fundamental reboot. This edition focuses on whether the Jazz can win in the playoffs with their current core.

The team with the best regular-season record in the league, featuring a dynamic offense that thrived from the 3-point line and a stingy defense that was anchored by a three-time defensive player of the year, couldn’t even make the conference finals because of Terrance Mann and Reggie Jackson.

That might be oversimplifying things a bit. Donovan Mitchell and Mike Conley Jr. weren’t 100%, with Mitchell’s right ankle injury sidelining him for Game 1 of Utah’s first-round series against Memphis and lingering late into the second-round loss to the Clippers, while Conley only played in Game 6 against Los Angeles. But the Jazz’s failure to capitalize on the mid-series absence of Kawhi Leonard – and allowing LA to rain down 3s in an 81-point second half in Game 6 – is the lasting image of Utah allowing its best chance for the franchise’s first title since the days of John Stockton and Karl Malone to slip away.

The Jazz had the fourth-best offensive rating (116.5) in the regular season and were even better in the playoffs (120.1) despite their starting backcourt’s ailments. The defense, though, fell off a cliff in the postseason, allowing 121.7 points per 100 possessions. Rudy Gobert and company posted a 124.7 defensive rating in the first four games against the Clippers, then got torched to the tune of 133.7 in the final two contests with Leonard watching from the bench.

All of Utah’s key rotation pieces except Conley are under contract for next season, and everyone except Joe Ingles is locked up through at least 2022-23. Is that a good thing – a sign of stability for a regular-season juggernaut – or an indictment of a roster that isn’t dynamic enough to win when it counts? Let’s take a look at whether the Jazz are a true title contender or need a significant makeover to challenge the Western Conference’s top dogs.

How Much Does Conley Cost?

Conley was excellent in the regular season, posting a 116.2 offensive rating that was in line with what the team did as a whole, and a 99.5 defensive rating that was the best of any player in the league who was on the floor for at least 3,000 possessions. But hamstring injuries cost him 45 games in the 2019-20 season and 21 more in 2020-21, then basically kept him out of the second-round loss to the Clippers, robbing the Jazz of a key part of their stalwart defense when it mattered most.

Conley earned more than $32 million last season in the final year of a five-year max deal he signed with the Grizzlies in 2016, and he’ll be 34 when the 2021-22 season begins. The market to sign him may be somewhat limited this summer, though the Mavericks are supposedly interested in pairing him with Luka Doncic.

There’s not really an option for the Jazz to replace Conley. Sticking Jordan Clarkson into the starting lineup alongside Mitchell is a non-starter, and as a team that projects to be at least slightly over the luxury tax line, Utah would only have the $5.9 million taxpayer’s mid-level exception to grab another point guard.

A shorter deal could be the best for both sides. Unless a team like the Knicks or Heat throws four years and a significant chunk of change at Conley, a two-year deal between $40 and $50 million would give the Jazz a couple more runs at the title with their core and give Conley a chance to grab one last smaller contract once he’s on the other side of his mid-30s.

No one is doubting Gobert’s capabilities as a defensive destructor in the regular season, but one has to wonder how having the game’s most disruptive force protecting the rim matters as teams adjust come playoff time.

When the Clippers went small, particularly after Leonard got hurt, Gobert wound up being lured further away from the basket. Gobert was forced to guard the likes of Marcus Morris and Nic Batum 25 feet from the basket, which left driving lanes wide open for Paul George, Jackson, and Mann. A once elite Jazz defense was scrambling to rotate and LA was finding the open shooter.

Gobert just signed a five-year, $205 million extension in December, so he’s likely going to be a cornerstone in Salt Lake City for the foreseeable future regardless of how effective teams are at exploiting him in the playoffs. Franchises aren’t going to be lining up to trade assets for a center not named Joel Embiid or Nikola Jokic who will earn $45 million a year on the backend of a deal in which he’ll be approaching his mid-30s.

What the Jazz need to do is figure out how to maximize the two-way ability of the rest of their roster. Joe Ingles, who was excellent on the defensive end all season, had even more to do offensively with Conley and Mitchell ailing and looked tired in the postseason. Bojan Bogdanovic and Clarkson couldn’t keep anyone in front of them. Mitchell was saving his energy for the offensive end. Royce O’Neale is a good defender, but he’s too one-dimensional to be on the floor consistently in crunch time when Utah needs baskets.

A Wing and a Prayer

There are ways the Jazz can upgrade their wing situation, but they’re not particularly attractive. The $5.9 million taxpayer mid-level exception will wind up costing Utah significantly more than that in tax money if it re-signs Conley. The Jazz were able to land guard Jared Butler from Baylor in the second round of the draft, but finding a plug-and-play rookie to contribute to a title team isn’t easy.

The most realistic route might be via trade, though that could involve one of their Sixth Man of the Year candidates. Ingles is due $14 million this season on the last year of his deal, and should have plenty of value around the league. Clarkson, who won the award, is due approximately $40 million over the next three years. He serves his purpose as an injection of offense off the bench, but you can find much cheaper versions of that player to give you 80% of Clarkson’s production.

Finding a 3-and-D wing is much more difficult, and Utah’s recent track record of adding those types in the draft isn’t particularly good. Ingles and O’Neale came off the scrap heap, and Bogdanovic came via free agency. Jaden McDaniels would look good in a Jazz uniform, but Utah took big Udoka Azubuike one pick before Minnesota nabbed him at No. 28 in last year’s draft. Darius Bazley, whom the Jazz picked in the first round in 2019, has potential, but he was part of the Conley trade and is now in Oklahoma City. So was Jae Crowder, who lasted a season and a half in Utah and couldn’t hit water from a boat but is now a key member of a Finals team. Justin Zanik has options as he assumes the general manager role from Dennis Lindsey, who has been moved into an advisory role within the front office. But he’ll need to be creative.

Mitchell was “definitely frustrated and upset” with Utah’s decision to keep him out of the lineup for Game 1 of the first-round series against Memphis, which led to the exact type of headline no fan base wants to see from The Athletic a day later: “An inside look at the mounting frustration between Donovan Mitchell and the Jazz, and where things stand.” That is not the way the Jazz hoped to be making headlines in the playoffs.

The long and short of it: Mitchell’s own team of trainers cleared him to play in the playoff opener, but Utah’s staff did not.

The Jazz have a new majority owner in Ryan Smith and a new stakeholder in Dwyane Wade, who certainly knows a thing or two about the importance of a franchise player being happy. Last week, ESPN’s Brian Windhorst brought up possible discord between Mitchell and the Jazz organization on a podcast appearance while discussing, among other topics, the long-running feud between coach Quin Snyder and Lindsey.

“I think Dwyane Wade is seriously concerned about Donovan Mitchell’s desire to stay there long term,” Windhorst said on his podcast. “… Wade is going to influence changes. And the reason that [he] is going to influence changes is because the way Donovan Mitchell saw this season unfold – specifically how his ankle injury was handled in the playoffs – really unnerved him. He was in a bit of a rough spot with the franchise near the end of the year.”

Mitchell, like Gobert, signed a five-year max extension prior to last season, but as we’ve seen with countless franchise headliners, agreeing to stay doesn’t mean much. If the franchise takes a step backward, or tries to rebuild on the fly and fails, Mitchell could eventually put pressure on ownership to seek a trade.

The Jazz didn’t exactly come out of nowhere to finish with the league’s best record, but the condensed season gave an advantage to teams that had some continuity – and an even bigger edge than usual to those who stayed healthy. Utah had both until Conley and Mitchell missed time in the final month, and those lingering injuries clearly played a role in its eventual playoff ouster.

There were obvious struggles to adjust to smaller lineups with the Jazz’s defensive limitations on the perimeter, and this is a roster that can stand some tweaks with the bottom half of what will eventually be its playoff rotation. But wholesale changes seem unlikely, at least for one more season.

If there’s an opportunity to package Ingles and Bogdanovic for a star wing, perhaps you sacrifice a bit of depth to take that swing, but the more likely scenario is re-signing Conley, making some smaller deals with a focus on adding perimeter defenders who can occasionally shoot rather than perimeter shooters who can occasionally defend, and possibly flipping or packaging the first-round pick for an asset that can help right away.

If we’re right back here a year from now, there may be questions about Mitchell’s desire to play out his contract and Gobert’s viability as a secondary star on a championship roster. For now, though, the Jazz still have room to evolve from a regular-season team that’s great on paper to a legit title threat that can get stops in the biggest moments.