The Life of Bryan Gil: Looking at the Tottenham Target | The Analyst 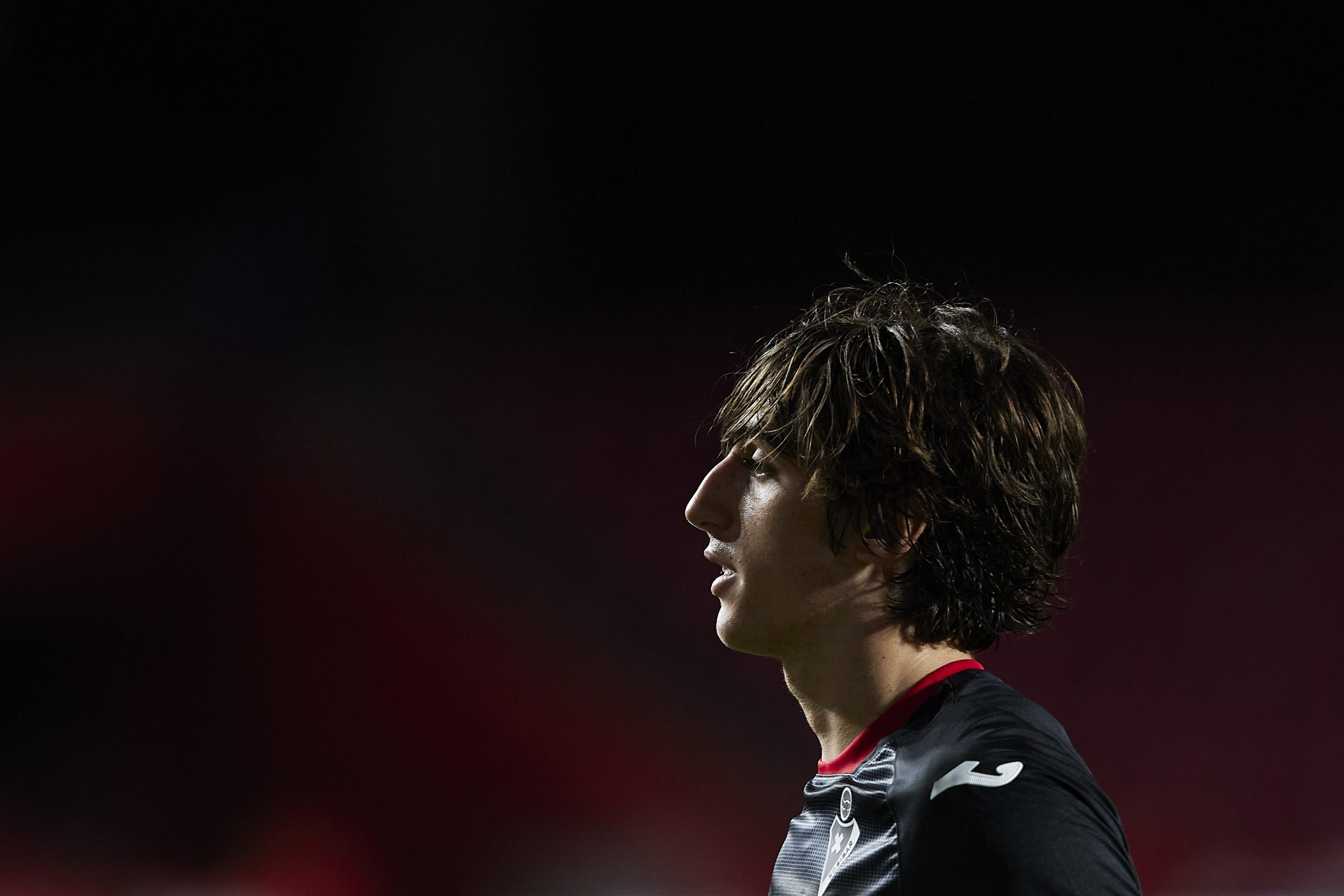 While the future of Harry Kane looks set to be the dominant talking point among Tottenham fans for the remainder of the transfer window, there does at least appear to be positive news for Spurs on the horizon regarding a potential incoming.

Granted, it’s probably not going to be the kind of deal that immediately has Kane thinking, ‘Hang on, this is all the proof I need that I can win trophies here’. But ambition is certainly at the root of the latest developments.

According to reports, Spurs are close to the signing of Bryan Gil for £21.6million (€25m) plus Erik Lamela. Should it go through, it’s arguably one of those rare deals that actually looks like good business for all involved.

For sure, if you consider Lamela to be worth somewhere between £15-20m, it’s obviously a lot of money for a player barely out of his teens, particularly when you consider the transfer could reportedly involve an extra £4.3m and a percentage of any future transfer.

But Bryan is arguably among the top three under-21 players in Spain with Ansu Fati and Pedri, and like them has already been capped by Spain. Although there’s no guarantee of success, the potential is there.

It was in Bryan’s third Segunda B game for Sevilla’s second team, Sevilla Atletico, that he truly announced himself in September 2018. Although he switched between the two flanks, he was at his liveliest on the left and his abilities caused chaos for the opposition, San Fernando.

Even at the age of 17, he was clearly a cut above everyone else on the pitch, his direct yet mazy runs conjuring up images of a young Ryan Giggs as he looked to weave his through the crowds in his way.

He got the first goal, an emphatic finish from the centre of the box, drew the foul that saw a San Fernando player sent off, and then brilliantly beat his full-back before darting along the byline and cutting the ball back to set up what proved to be a 90th-minute winner.

While that game saw Bryan grab the attentions of a few more Sevilla fans, those who had worked with him before were already well-accustomed to his ability.

Sevilla have a link-up with a local school, and their football team CD Altair has seen numerous players come through their side en route to Los Nervionenses’ first team. Jose Campana, Antonio Luna, Sergio Rico, Carlos Fernandez and many others have made that journey, while Carlos Alvarez – their next potential homegrown superstar – featured for the first team in a recent friendly at the age of 17.

The technical secretary of Altair, Miguel Mora Lopez, considers Bryan to be one of the two standouts.

“Altair has had a good relationship with Sevilla for many years now,” Mora told Stats Perform.

“Throughout our history there are countless professional players who have passed through our ranks in their early years, but it’s true that Bryan or Carlos [Alvarez] are the most outstanding so far.

“We always thought that Bryan would succeed in professional football. He was with us only one season when he was 14 years old, but we liked his game. He was creative and very incisive in attack.”

January 2019 saw Bryan make his first appearance in La Liga for Sevilla, and he went on to make 10 more before the season was up, becoming the first player born this century to get an assist in the top five European leagues. Everything pointed towards him potentially becoming a regular in 2019-20.

While the appointment of Julen Lopetegui has generally been extremely fruitful for Sevilla as a whole – a Europa League crown and back-to-back top-four finishes – it’s difficult to not now see that as the beginning of the end for Bryan at his boyhood club.

Spurs fans might be inclined to see this as a red flag. ‘If Lopetegui doesn’t rate him then why are we signing Bryan?’ It seemingly comes down to the style of player that he is.

Bryan is above all quite an old-fashioned winger. Though he is adept at coming inside even from the left – and a future as a number 10 certainly isn’t outside the realms of possibility given his technical ability – a lot of his game is about running at his man, beating him and getting a cross into the box.

For example, his tally of 122 open-play crosses was the fifth-highest in La Liga last term. He’s certainly persistent, and in theory this should be perfect for the system Lopetegui likes to operate, with a big and physical centre-forward to get on the end of deliveries. After all, Youssef En-Nesyri came third behind Ante Budimir (seven) and Karim Benzema (six) for among the most headed goals in 2020-21.

But in reality, Lopetegui prefers to use inverted wingers while overlapping full-backs provide more of the ‘traditional’ wing play. Lucas Ocampos, Suso, Alejandro Gomez, Rony Lopes and Oussama Idrissi are all wingers signed since Lopetegui took over – all like to cut in from the flank and on to their stronger foot.

Bryan played just two league games in 2019-20 prior to joining Leganes on loan for the second half of the season and was then allowed to join Eibar for 2020-21. It proved to be a stroke of genius in some ways.

Although Eibar suffered relegation, Jose Luis Mendilibar’s 4-4-2 setup helped bring out the best in Bryan. Their high-pressing system showcased his tenacity and work rate, while their two-man attack meant wing play was essential without a bona fide number 10.

He quickly blossomed into a key player.

Spurs fans looking to learn more about Bryan may see his goals (four) and assists (three) output in La Liga as perhaps a little underwhelming, though that doesn’t really give the clearest picture of his effectiveness.

For starters, we have to remember Bryan was playing in a team that finished bottom of La Liga, with Getafe (28) the only team to score fewer goals than they did (29).

It’s fair to say that was more about those finishing the chances as opposed to Bryan’s creativity. His 0.18 xA (expected assists) per 90 minutes was bettered by only five wingers/wide midfielders (minimum 1,500 minutes played) last term, while it was a fair bit higher than his 0.12 actual assists per 90.

Similarly, among the same group of players, Bryan ranked fourth for the most open-play key passes per 90 minutes (1.4), which again makes him something of an outlier considering Eibar’s relegation.

It’s also worth pointing out relegation battles aren’t generally the situations managers tend to chuck teenagers into without any consideration of their mentality and qualities – but Mora’s assessment brings further credence to the idea that Bryan’s just a bit different.

“He wasn’t shy at all,” Mora added. “Yes, he was a skilled player who moved the ball well and made very precise crosses, but he also added bravery on the field. He never avoided a ‘melee’ with any opponent.”

That bravery can manifest itself in several ways. One of them is tenacity – his average of 12.7 duels per game is impressive for a wide player. Most of those who rank higher than him (minimum 1,000 mins played) are central strikers. For further context, Lionel Messi recorded 14.9 in 2020-21.

Additionally, Bryan regained possession in the final third 1.2 times every match, a figure only two players could beat in 2020-21 (min. 1,000 mins).

And the other area where his courageous streak comes into play is with regards to dribbling, probably his biggest asset. Alberto Perea (6.1) and Ousmane Dembele (5.5) were the two individuals to attempt more take-ons per game than Bryan (5.2), while over the course of the season, he set up 16 chances following a ball carry. Among those considered by Opta to have played predominantly as a winger/wide midfielder in 2020-21, Bryan’s 16 ranked only behind Goncalo Guedes (17) and Dembele (23).

System Adaptation May Be Required

There’s little doubt Bryan has a lot to offer, and although his rather scrawny stature might lead to concerns over his physical suitability, he’s demonstrably a player who isn’t shy or withdrawn.

But stylistically it will be intriguing to see how he settles into the team should the deal go through. At Eibar last season he played in a side that was almost characterised by its high press, their 363 high turnovers being more than any other side in La Liga. By contrast, Spurs recorded just 228 while new coach Nuno Espirito Santo’s Wolves managed just 205 – both were among the bottom three in that metric.

But Spurs’ 68 direct attacks were 28 more than Eibar, and Bryan’s pace, ability on the ball and eagerness to get in a cross could potentially suit that rather well, while Nuno tended to play with two genuine wingers at Wolves.

Of course, the deal does represent something of a gamble, but is there really such thing as a ‘Premier League guarantee’? We’ve seen countless players do well at one Premier League club before tanking at the next. Alexis Sanchez, anyone?

The important thing here is that Bryan’s undoubtedly an exceptional talent and his skillset – at least in theory – seems to lend itself quite well to the fast and furious Premier League.

The last winger to make his way from Sevilla to the Premier League was Jesus Navas. For all his critics, he didn’t do too badly, and Bryan already appears rather more equipped.