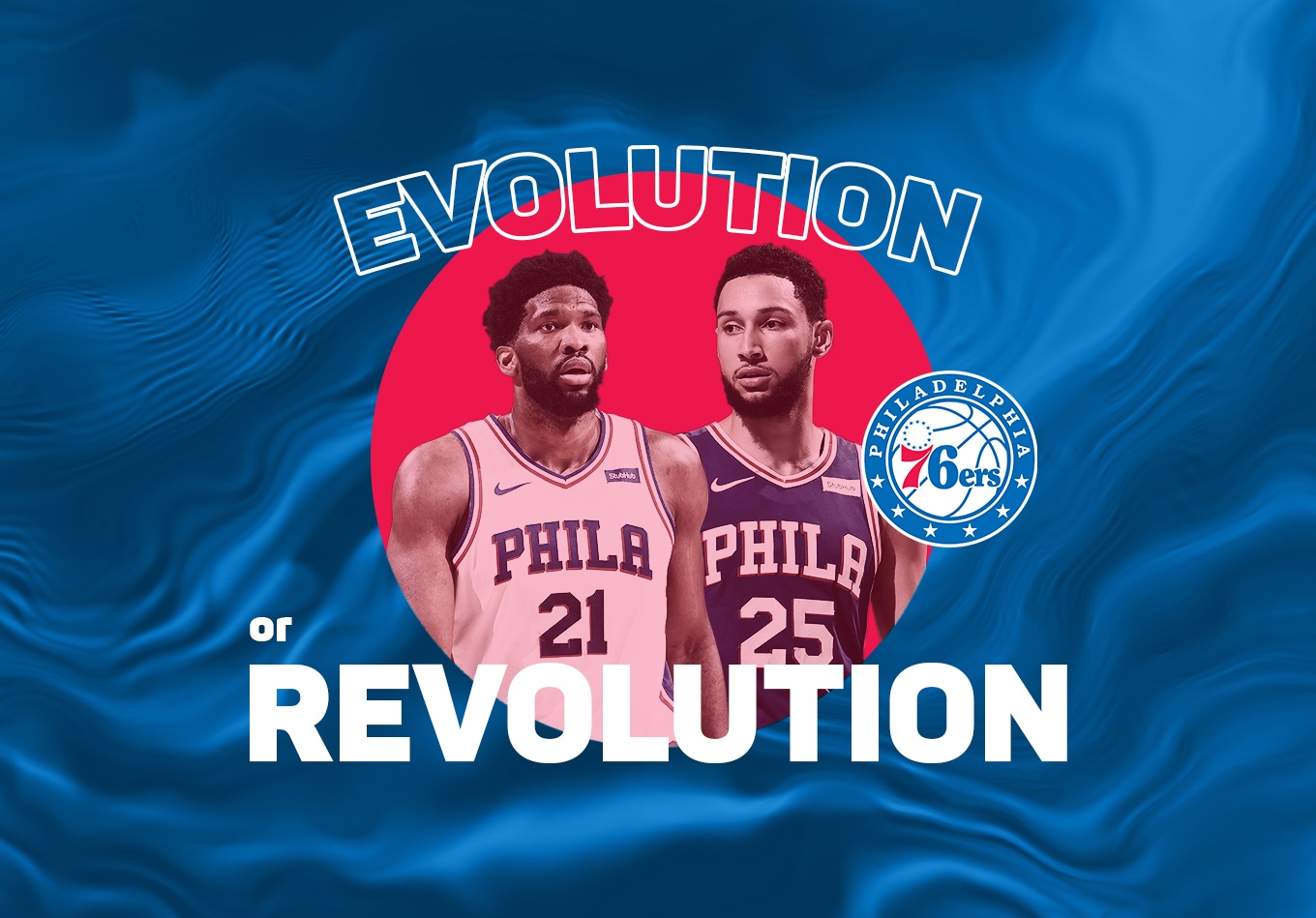 Evolution or Revolution is a series that analyzes whether a team needs a few tweaks or a fundamental reboot. This edition focuses on the 76ers and what they should do about their much-maligned star point guard.

“Trust the Process.” But for how long?

That mantra – after tanking out and starting from the bottom eight years ago – has become synonymous with the team’s culture and identity since former 76ers general manager Sam Hinkie started a drastic rebuild of Philadelphia’s roster and psyche in 2013.

The long-term vision, in pursuit of a first NBA title since 1983, has delivered All-Stars Joel Embiid and Ben Simmons, however, the 76ers have not progressed beyond the Eastern Conference semifinals.

Doc Rivers was brought in to replace Brett Brown and deliver the long-awaited championship, yet the same old issues and questions remain after the top-seeded 76ers were sensationally eliminated by the fifth-seeded Atlanta Hawks in the second round.

While Embiid narrowly missed out on the MVP award, Philadelphia’s latest failure has only amplified pressure on shot-shy Simmons amid growing speculation over his future following a forgettable playoff campaign.

President of basketball operations Daryl Morey is tasked with turning the contenders into champions. Will he blow it up or run it back in 2021-22?

The Rise of Joel Embiid

His own harshest critic, Embiid sets the bar high, demanding the absolute best from himself and the 76ers in pursuit of a coveted championship.

“Losing, obviously, it’s gonna take a toll on me, and it does and it’s doing it, but it’s also on me,” said Embiid after Philly’s playoff exit. “I gotta be better. I gotta take another step when it comes to taking care of my body and my game as a whole, because I still feel like I have a lot of untapped potential that people haven’t really seen.”

A knee injury proved costly in the MVP race as he finished second to Denver Nuggets big man Nikola Jokic. If he had player in another 10-15 games, Embiid may have become the first 76ers player since Allen Iverson 20 years ago to earn the award. Accolade or not, there was no denying Embiid’s impact on his team and the league last season.

Embiid’s improvement was evident as he went from averaging 23.0 points in 2019-20 to 28.5 this season. His plus-5.5 increase ranks sixth all time among All-Star centers for largest increase in points per game from one season to the next.

There’s no debating that Embiid is the heart and soul of this Philly team. In 2020-21, the 76ers held a 45-17 win-loss record with their big man (including the playoffs) but dropped 11-11 without him.

Embiid, who earned a fourth All-Star selection, is now eligible to sign a four-year, supermax extension after being selected to the All-NBA second team. While there has long been question marks over his health and fitness, his form merits a monster pay rise.

“I love being in Philly. I love this organization,” Simmons said after he was subjected to boos by Philly fans after their Game 7 loss to the Hawks. “The fans are great, great people. I had a bad series. I expect that. It’s Philly.”

But Simmons, the team’s No. 1 draft pick in 2016, may not have a choice on the matter amid intensifying trade talk.

Fresh off elimination, Rivers was asked by reporters if he thought Simmons could be a guard on a championship team. His response was telling: “I don’t know the answer to that right now.”

Since then, Rivers has said he wants Simmons to remain and that the 76ers have a plan for the Australian star, who will skip the Olympic Games in Tokyo to focus on fine-tuning his skills.

But after four seasons in the league, there has been no improvement from three-time All-Star in one fundamental area – shooting.

An elite defender and creator, the debate around Simmons centers on his offensive game and how the 76ers are handicapped by his unwillingness to shoot.

Then there is the issue of Simmons and free throws. He was exposed when opponents regularly sent him to the line and he made just 25 of 73 in the playoffs. His 34.2 free-throw percentage is the fifth lowest in a single postseason among those who have had 25 attempts.

In the closing stages against the Hawks, Simmons passed on a seemingly wide-open dunk and threw the ball to Matisse Thybulle, who was fouled and made just one of his two free throws.

And it was clear that the LSU product’s unwillingness to shoot irked Embiid.

Morey, who reportedly considered the idea of using Simmons as part of a deal to pry James Harden from the Houston Rockets in January, has a decision to make with the 76ers in the win-now window.

Is Rivers the man to complete the process for the 76ers?

A proven winner with the rival Boston Celtics, Rivers landed on his feet following his exit from the Los Angeles Clippers. He guided the 76ers to a 49-23 record atop the East, ahead of the star-studded Brooklyn Nets and Milwaukee Bucks.

However, it was an all too familiar story for Rivers in the playoffs. His team collapsed.

Rivers suffered a fourth consecutive Game 7 defeat to tie the longest streak ever by a head coach, after former Sacramento Kings and Rockets coach Rick Adelman also lost four in a row between 2002-09.

The 76ers blew an 18-point lead in Game 4 against the Hawks before surrendering a 26-point advantage at home in Game 5. That came after Doc’s Clippers somehow squandered a 3-1 series lead to the Nuggets in 2020.

“Listen, this team last year got swept in the first round. We had a chance to go to the Eastern finals. I’m not gonna make this into a negative year,” Rivers said.

Rivers has 29 losses with a chance to clinch a playoff series – the most defeats by a coach in NBA history – and his 34.1 winning percentage is the worst ever among coaches with 20-plus games.

The 59-year-old is under the microscope on the back of this latest failure, having not progressed past the second round of the playoffs since the 2012 postseason in Boston.

Morey and general manager Elton Brand have their work cut out this offseason, with Simmons’ future at the top of the list.

Despite a horrendous playoff series, there is still plenty of value around Simmons. A host of teams are already reportedly circling, and there’s a consensus that it’s time for both parties to go their separate ways. Simmons could do with a change of scenery and the 76ers could use a legitimate shooter/scorer to supplement Embiid’s MVP-calibre ability.

Then there is Philadelphia’s bench and depth. It remains to be seen whether the likes for Furkan Korkmaz will still be around come tip-off in 2021-22, so boosting the team’s bench and 3-point shooting is paramount if Philly is to get beyond the second round and complete the process.