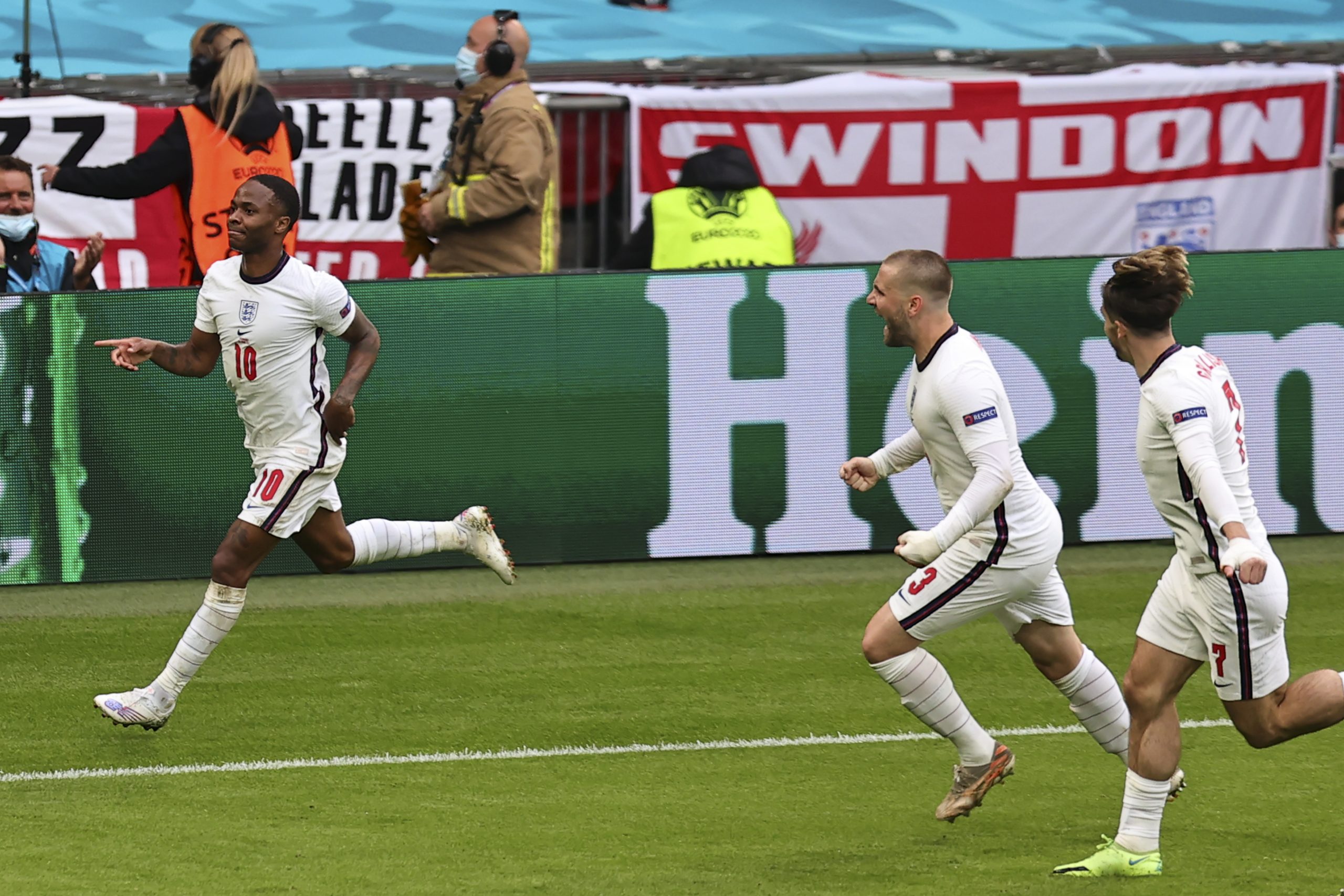 Ukraine We’ll See You Again (in Rome on Saturday)

Remember Sweden beating Poland to win Group E and secure what turned out to be the preferred side of the bracket. That victory’s fallout sent Ukraine through to the Round of 16. The two met on Tuesday night in Glasgow, and a stoppage-time goal moments before the game went to penalties sent Ukraine through to their first ever quarter-final in a major tournament and a matchup with England.

Those English players will be extremely familiar with the player who had a hand in both of Ukraine’s goals, Oleksandr Zinchenko. The Manchester City player assisted Artem Dovbyk in the 121st minute against 10-man Sweden for the second-latest goal in the history of the Euros.

Dovbyk had come on 16 minutes prior for an exhausted Andriy Yarmolenko, who assisted Zinchenko on Ukraine’s first goal way back in the 27th minute. Yarmolenko has now been directly involved in four of Ukraine’s six goals, pushing him to five in his career at major tournaments to draw even with his current manager Andriy Shevchenko for the joint-most of any Ukrainian player.

For Sweden, playing from behind was something new. They hadn’t trailed in Euro 2020 until Ukraine’s goal first, and it lasted just 16 minutes until Emil Forsberg equalised on a shot that deflected off a Ukrainian defender. It was his fourth goal of the tournament, though he’ll now remain one short of Kennet Andersson’s five in the 1994 World Cup for the most by a Swedish player at a major tournament.

Then for Sweden, playing with this much of the ball was something new with 50.5% possession in the first half and 53.3 in the second (41.9 v Slovakia, 33.4 v Poland, 14.9% v Spain). That too went well enough and they were the team on the front foot more often than not in the second half with six shots to Ukraine’s four. That included two of the three shots off the woodwork in the second half.

That rebound series started in the 55th minute when Yarmolenko found Serhiy Sydorchuk, who bent a shot off the near post. A minute later on the counter, Forsberg hit the far post. Then in the 69th minute, Forsberg carried the ball to top of the box and hit the crossbar. It matched Poland-Spain for the most shots off the woodwork in a single match of the tournament, and soon after the pace of the match seemed to catch up with both teams.

Finally for Sweden, the oldest team at the tournament, defending with 10 men was something new. Extra time took an ugly turn when Marcus Danielson went high on the leg of Artem Besedin, hyperextending himself to a straight red card in the 99th minute. It seemed for 20 minutes the Swedes would weather that too, confident enough to hand things over to the goalkeeper who’d already kept them in this tournament, Robin Olsen.

Alas, Ukraine, the eighth team to qualify for the Euro 2020 quarter-finals were the third third-place team to get through, but it wasn’t an entirely unlikely accomplishment. Their pre-tournament chances to reach the last eight were 36.2% according to our predictor, which was 10th highest in the 24-team field. For comparison’s sake, fellow quarter-finalists Czech Republic had a 15.9% chance. They now have a chance to meet in the semis, and a chance is all either of those teams have needed so far.

The best things come to those who wait. For England it had been almost 55 years since they had beaten Germany at home in a competitive game. You know the one. In the subsequent years, the Germans had cruised up Wembley Way and dominated, so much so in gloomy 2000 that the English were forced to demolish the stadium. A new version of the ground was constructed and if you combine the two, this was England’s 300th match in that specific corner of Brent, and their 15th there in a major tournament. They head to Rome for the quarter-final but will return to London if they get past Sweden or Ukraine. Games 16 and 17 could be some of the most important ever played there.

Brent is important for other reasons too, because Raheem Sterling grew up there. And once again he opened the scoring for England, the first player to score the country’s first three goals in a tournament since Gary Lineker at the 1986 World Cup. Once Sterling scored in the 75th minute the sense of relief could have powered the nation’s electricity grid.

David Brent once said “you’re still thinking about the bad news aren’t you,” and while that isn’t applicable to England fans in the slightest, who will celebrate this win for at least a century, maybe three, until that first England goal went in, this game was following the pattern of so many games at Wembley – cagey and/or a bit scrappy. 1-0, 0-0, 1-0, 2-0 are England’s results there, while Italy against Austria was 0-0 until the additional 30 minutes. Wembley may not do 5-3s or 3-3s but it does do tension. And increasingly fevered atmosphere. Group D has provided two of the quarter-finalists, with Croatia unlucky not to be there too. A real group, that one.

Sterling and Jack Grealish will take a lot of the headlines but England’s back three of Walker, Maguire and Stones all played excellently, and the nullification of Germany’s wing-backs was both well-planned and well-executed. Both sides ended the game with an xG of 1.3, but Germany only managed three efforts on target, all of them expertly dealt with by Jordan Pickford, the most consistent England player in the Southgate era, despite what your uncle thinks. Maguire’s ability and desire to bring the ball out and up the left flank spurred on England’s best spell of the first half, while the arrival of Grealish suddenly turned England into a clinical side. They had two shots after the Aston Villa man was brought on and both ended up in the back of the net. Harry Kane was staring at a seventh tournament game in succession without a goal: not anymore. Our predictor now has England as third favourites on 18% and number one favorites to reach the final on 47.5%. Slowly (sometimes too slowly) but surely, they are edging closer.

England’s proud defensive record at this tournament is now played four, conceded none. It’s the first time they’ve started a tournament that tightly since 1966, and their xG conceded figure of 2.66 is beaten only by Italy on 2.1. There’s a chance that could be the final, and if so, the 0-0 at full-time looks incredibly tempting. Of course, Germany had a perfect opportunity to equalise in the 81st minute, Thomas Muller just missing the left corner when he had the entire goal to aim at. He had been played through by Raheem Sterling, momentarily falling victim to England’s habit of passing backwards a little too often. The fact it was probably Germany’s most incisive attack of the second half says more about Jogi Löw’s team than Sterling, though. England have the boy from Brent, this Germany team are all but spent. Löw is gone while the highs are back for the Three Lions. Three matches from some sort of redemption arc. Enjoy it, if you can. DA

The Morning After the Night Before

Well yesterday was probably the most ridiculous, barmy and idiotic day of international football … ever? 14 goals. 73 shots (+1 at his own goal from Pedri). Only June 23, 2021 has produced more goals (18 in 4 games) on a single day in European Championship history.

The good news? We get to do it all again today. The bad news? We (almost) certainly won’t see the goal tally get anywhere close to the 14 we saw yesterday. Especially with England (no goals conceded) and Sweden (two goals conceded) in action.

But what today may lack in goalmouth action, it’ll make up for in nerve-shredding tension. There is really no other way than when England and Germany meet. And that’s where we begin today’s games.

In all major tournaments (Euros and World Cup), England and Germany have met seven times previously. Both sides have won two games with three draws apiece, though the Germans have progressed via a penalty shootout following two of those draws.

One of those draws was of course at Euro 96. For a data journey through the story of that whole tournament, you can (painfully) revisit it here.

England will have home advantage in this one in what will be their 300th international game at Wembley stadium. It’s become something of a fortress for them over the years, with the Three Lions unbeaten in all of their 14 Euros or World Cup finals matches at the home of football (W9 D5).

That home advantage is certainly baked into our model’s match probability, which gives England a 65.2% of progressing through the tie.

Raheem Sterling, scorer of both England’s goals at Euro 2020 so far, comes into the clash in seriously good form, with 14 goals in his last 19 appearances. Sterling is officially England’s good luck charm too. When he scores, England always win:

So when he scores later, please – relax.

We’ve seen an inconsistent Germany so far. A fantastic performance against Portugal, flashes against France before a head-scratching 2-2 draw with Hungary.  Let’s not forget that they were six minutes from elimination. England will be looking to go after a slow and porous backline that has conceded in each of its games so far.

But despite their erratic performances thus far, they are always a lurking threat. Particularly at the Euros where they’ve reached the semi-final in each of the last three editions. Our model gives them a 34.8% of progressing later today.

The late kick-off pits Group E winner’s Sweden against Ukraine, the only third-placed side to progress with just three points. Rather peculiarly, Ukraine have lost seven of their last eight games at the European Championship, but their solitary victory over North Macedonia was enough to see them through to the last 16.

There’s been no secret to Sweden’s approach this tournament. With just two goals conceded so far – only England, Belgium and Italy have conceded fewer – they have looked to keep things tight at the back. This has often meant ceding possession: Sweden made the fewest successful passes (591) and had the lowest passing accuracy (69.9%) of any side in the group stages at Euro 2020, while of the teams to reach the last 16 they also had the lowest average possession rate (29.6%). Granted one of those games was against Spain who can really juice those numbers, but it shows that the Swedes are more than comfortable to operate without the ball.

At the other end of the pitch, they’ve been heavily reliant on Emil Forsberg. He has three goals at Euro 2020 so far – the last time a Swedish player scored more in a major tournament was the 1994 World Cup (Kennet Andersson five, Martin Dahlin four).

For Ukraine, their main threat is their Y-Axis: Yarmolenko and Yaremchuk.  Each of the pair has two goals and an assist to their name at Euro 2020 and have been directly involved in three of Ukraine’s four goals in the group stages. Our win probability gives Ukraine just a 34% chance of progressing later, but we’ve all seen that anything can happen in football.